Copyright: © 2021 Wu et al. This is an open access article distributed under the terms of the Creative Commons Attribution License (CC BY 3.0), which permits unrestricted use, distribution, and reproduction in any medium, provided the original author and source are credited.

Licochalcone A (LA) is a chalcone flavonoid of Glycyrrhiza inflata, which has anti-cancer, antioxidant, anti-inflammatory, and neuroprotective effects. However, no anti-aging benefits of LA have been demonstrated in vitro or in vivo. In this study, we explored whether LA has an anti-aging effect in adipose-derived stem cells (ADSCs). We performed β-galactosidase staining and measured reactive oxygen species, relative telomere lengths, and P16ink4a mRNA expression. Osteogenesis was assessed by Alizarin Red staining and adipogenesis by was assessed Oil Red O staining. Protein levels of related markers runt-related transcription factor 2 and lipoprotein lipase were also examined. RNA sequencing and measurement of glycolysis activities showed that LA significantly activated glycolysis in ADSCs. Together, our data strongly suggest that the LA have an anti-aging effect through activate the glycolysis pathway.

Stem cell exhaustion is a critical factor of aging. Adipose-derived stem cells (ADSCs), which are obtained from adipose tissue, exhibit a high proliferative ability, rapidly self-renew, and can be directed to differentiate into osteoblasts, fibroblasts, and nerve cells [10]. Extensive research has shown that ADSCs play major roles in aging, such as increasing the superoxide dismutase level and decreasing the malondialdehyde content of aging rats [11]. Additionally, ADSCs promote myelin sheath regeneration and reduce loss of nerve functions in mice [12]. Furthermore, injection of an Alzheimer’s disease mouse model with a certain dose of ADSCs promotes microglial cell activation and nerve regeneration by ADSCs homing to the lesion site and differentiating into nerve cells [13, 14]. However, the proliferative ability of ADSCs decreases in aged animals [15] and young ADSC transplants show significantly higher bone regeneration for osteoporosis treatment [16]. Regardless, ADSCs are a suitable cell source to research aging-related problems.

Natural small molecule compounds are widely used in clinical studies. Recently, increasing attention has been focused on the molecular mechanisms related to aging controlled by an epigenetic-modulating diet with polyphenols [17]. For example, resveratrol plays an important role in anti-aging by activation of deacetylases [18], whereas quercetin induces cytochrome c expression in the brain [19].

In this study, we investigated whether LA had an effect on the proliferative and differentiation abilities of hADSCs and examined the underlying anti-aging mechanisms. Additionally, we determined whether treatment with LA improved cell proliferation by RNA sequencing (RNA-seq) analysis and measurement of glycolysis activities.

Samples of hADSCs were obtained from subcutaneous adipose tissues and the cells had been identified by our previous work [31], a characterization of the multipotency showed that a state of aging after P9 as evidenced by a gradual increase in size and irregular shape at P9 and P16. Additionally, expression of cell senescence-related molecular marker P16ink4a was increased significantly, telomeres were shortened, and the number of SA-β-gal-positive cells was increased significantly at P16. Therefore, we chose aging state cells to research the anti-aging effect of LA [31].

To evaluate LA cytotoxicity, hADSC were treated with various concentrations of LA for 24 h and then evaluated for cell viability. The results indicated that LA (25 μmol) significantly increased hADSC viability compared with Ctrl treatment (p<0.05) (Supplementary Figure 1A).

Furthermore, growth curves of various passages displayed an initial lag phase of 2 days, followed by an exponential log phase from 3 to 5 days, and then cells entered a plateau phase at 6-7 days (Supplementary Figure 1B). The results showed that LA (25 μmol) promotes cell proliferation compared with Ctrl treatment on the fourth day (p<0.05).

To examine the effect of LA on senescence, we performed SA-β-gal assays. SA-β-gal staining revealed significantly fewer senescent cells in the LA treatment group compared with the Ctrl group (p<0.01) (Figure 1A). 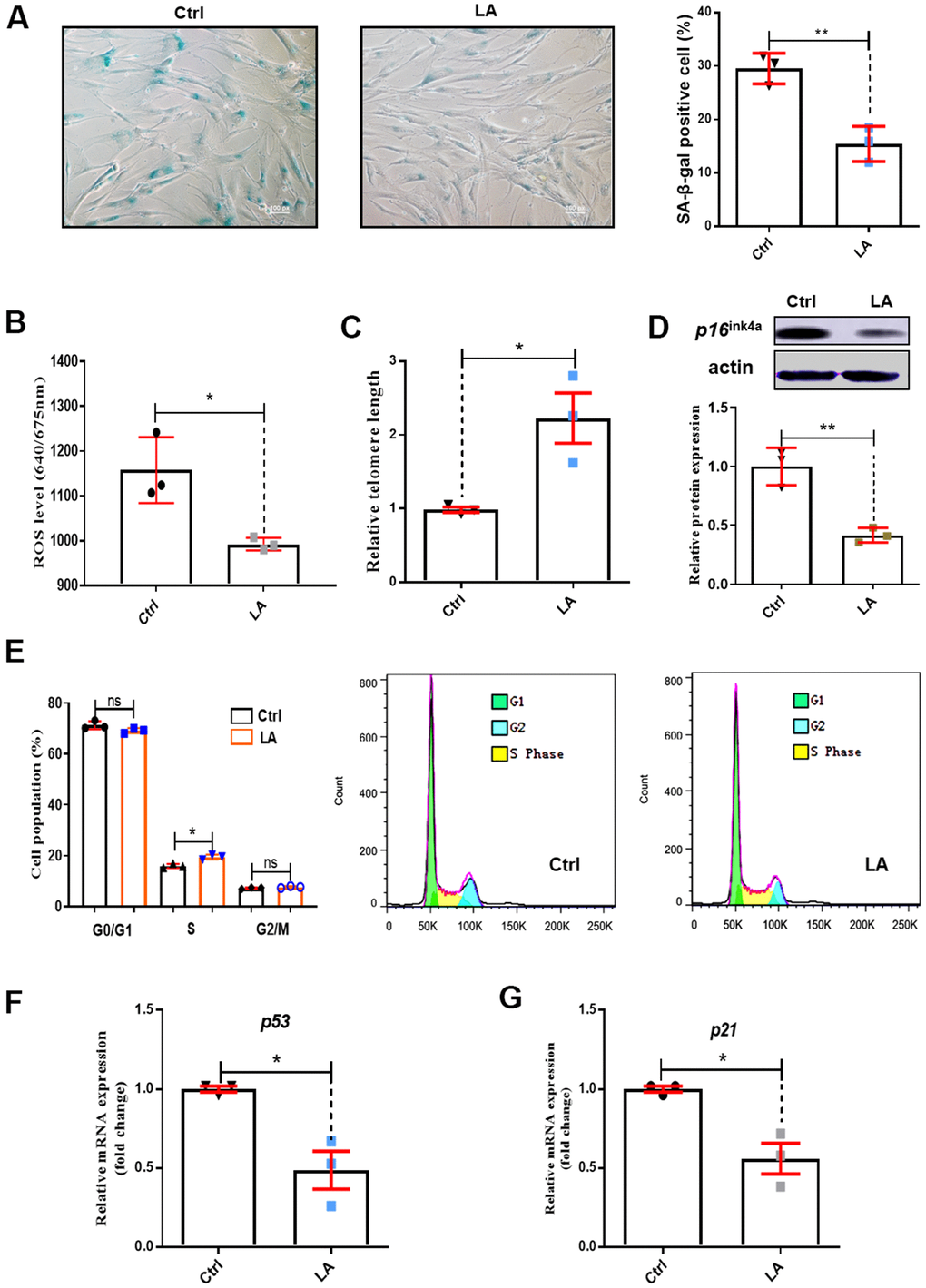 Effect of LA on the differentiation capabilities of hADSCs 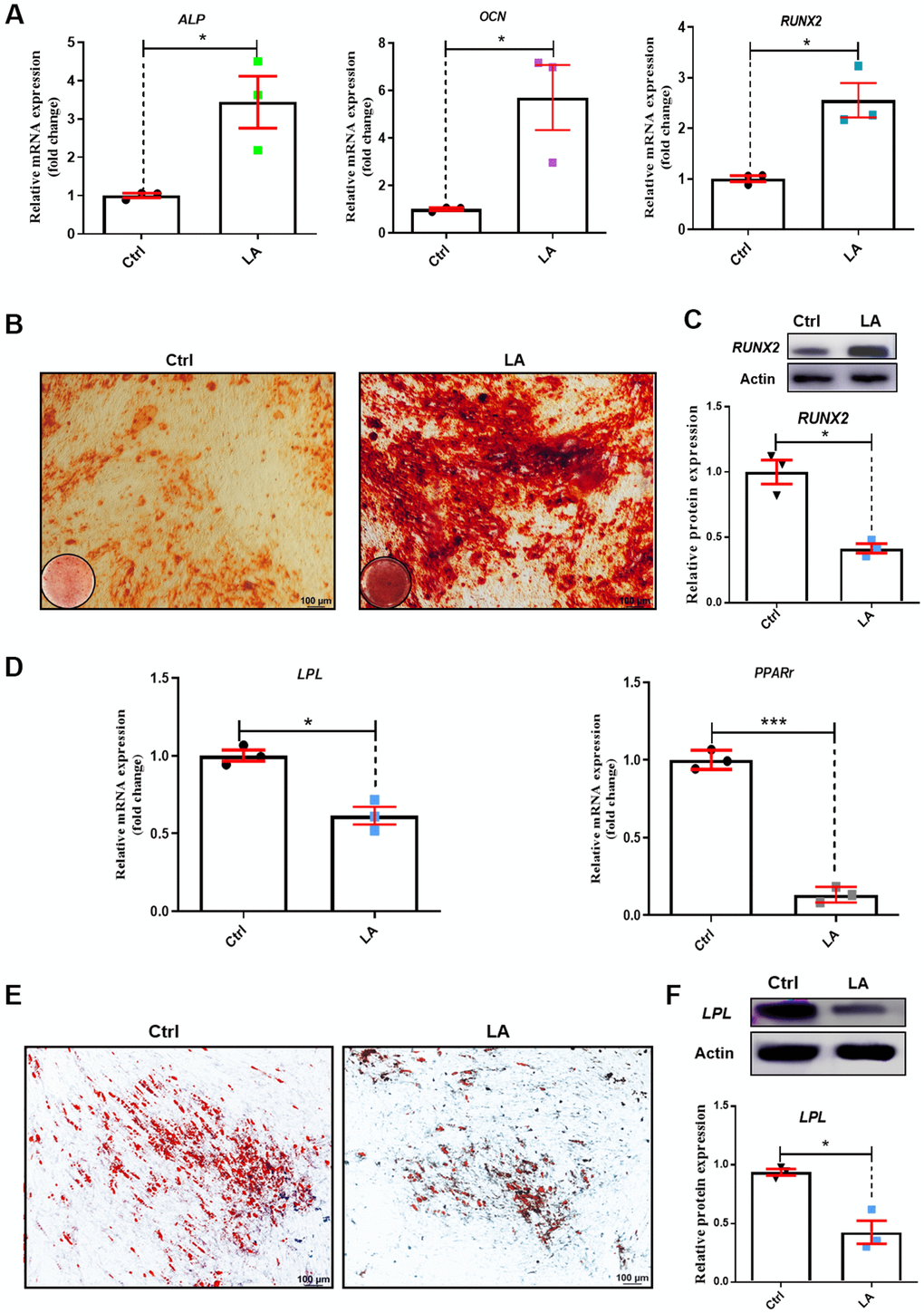 Effect of LA on glycolysis/gluconeogenesis pathways in hADSCs 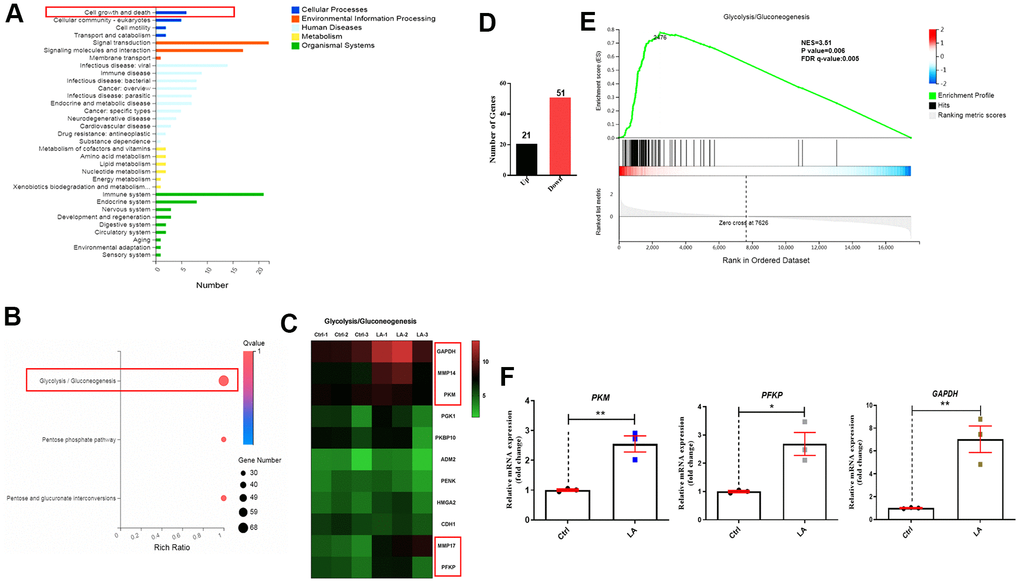 Following LA treatment of hADSCs, glucose consumption was increased (Figure 4A). ECAR in hADSCs at each phase in the glycolysis pathway showed that basal, glucose, oligomycin, and 2-DG (2-Deoxy-D-glucose, one of the glycolysis inhibitors) phases were significantly higher in LA1 and LA2 groups than in the Ctrl (P<0.01) (Figure 4B). Additionally, when treated with LA (25 μmol), the relationship between ECAR and OCR showed a positive correlation and was higher than in the Ctrl (Figure 4C). Glycolysis levels showed that LA activated the glycolysis pathway by significantly improving ECAR and OCR in aged hADSCs compared with the Ctrl. Previous RNA-seq data suggested that LA can increases the expression of GAPDH, a critical regulation enzyme in the glycolysis pathway, and the upregulation of GAPDH expression can activate glycolysis progression [48]. Western blot analysis showed that GAPDH protein level was increased in hADSCs treated with LA (p<0.05) compared with the Ctrl (Figure 4D). 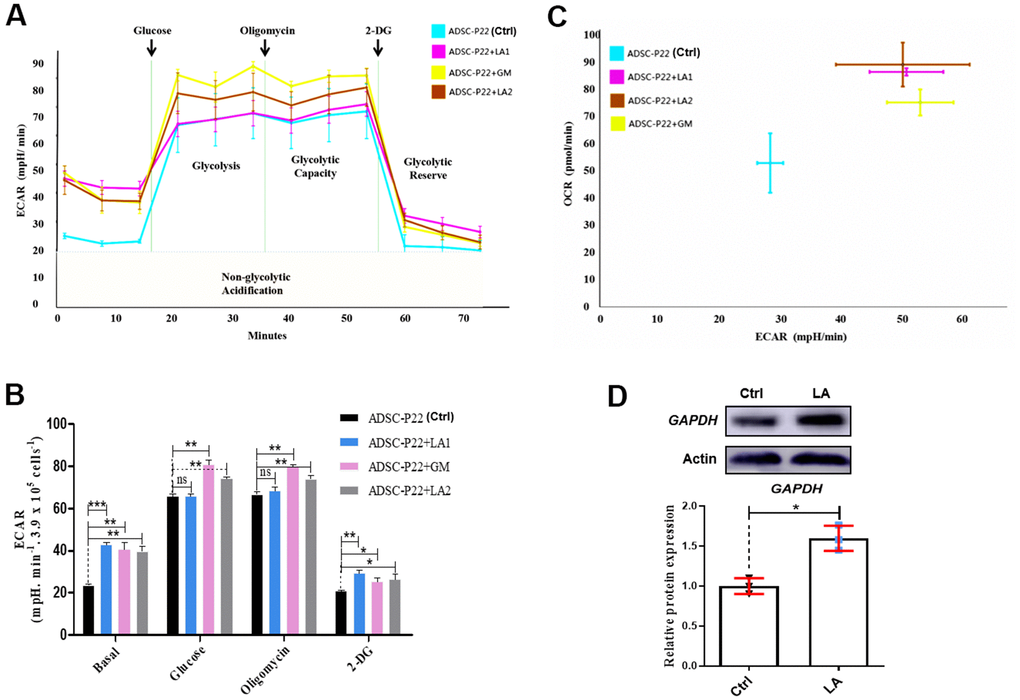 Figure 4. Measurements of glycolysis activities in hADSCs. (A) ECAR in hADSCs at each phase of the glycolysis pathway. (B) Statistical analysis of ECAR at each phase. (C) Relationship between ECAR and OCR in the glycolysis pathway of hADSCs. GM: Metformin. (D) Western blotting of GAPDH protein expression. Data are presented as the mean ± SD of three independent experiments. Statistical significance was determined by the unpaired t-test. *p < 0.05, **p < 0.01, ***p < 0.001 compared with the Ctrl.

Other research found that AMPK (AMP-activated protein kinase) has been shown to regulate the senescence [49], which have reduced the expression of the epigenetic factor p-AMPK (phospho-AMP-activated protein kinase) in aged mice [50]. AMPK can mediate increase of glycolysis in human cells [51]. Western blot analysis also showed that LA (25 μmol) upregulated the protein expression of p-AMPK (p<0.01) compared with the Ctrl and cannot regulate the protein expression of AMPK (Supplementary Figure 3).

Young hADSCs are an ideal source of adult stem cells in clinical applications. However, the continuous culture of mesenchymal stem cells results in cell senescence. In this study, we examined the potential anti-aging effects of LA (25 μmol) on senescent hADSCs. Related evaluations confirm the regulation of LA on aging. The expression of P16INK4A, which regulates senescence, was downregulated by LA [52]. ROS levels are increased in aging cells, and increased ROS levels inhibit cell proliferation [53]. Our results showed that LA decreased the ROS level in hADSCs. Telomeres become shorter in senescent cells [54]. LA can protect telomeres from shortening in hADSCs during proliferation. Osteogenic and adipogenic differentiation is also a critical aging indicator [55]. During mesenchymal stem cell aging, bone mass decreases and bone marrow adiposity increases [56].

In conclusion, our results suggest that the anti-aging effects of LA (25 μmol) are associated with induction of the glycolysis pathway. As is known to all, glycolysis is a critical pathway in glucose metabolism that provides intermediates for energy generation [62]. Such as upregulation of glycolysis is a major characteristic of provides energy to support rapid proliferation [63]. Glycolysis also regulates the activation of fibrogenesis in the aged lung in vivo and in vitro [57]. So, glycolysis is linked to cell growth and the findings showed the anti-aging property of LA by activating the glycolysis pathway. These findings may have broad implications for therapeutic that LA has an anti-aging effect on human adipose stem cells.

LA (C21H22O4; MW: 338; ≥98% pure, HPLC grade) was purchased from Chengdu Push Biotechnology Co. Ltd. (Sichuan, China) and stored at 2–8° C in a dark, dry place. The stock solution concentration was 100 mmol in dimethyl sulfoxide (DMSO). The final DMSO concentration did not exceed 0.1% in the culture medium. hADSCs at passage (P) 22 (late passage) were cultured in a humidified atmosphere with 5% CO2 at 37° C in DMEM/F12 (Thermo Fisher Scientific, Waltham, MA, USA) supplemented with 10% FBS and 100 U/mL penicillin and streptomycin.

Cell viability and growth kinetics were measured by CCK-8 assays. Briefly, cells were seeded in 96-well culture plates and treated for 24 h with various concentrations of LA (0, 25, 50, and 100 μmol for the cell viability assay; 25 μmol for the growth kinetics assay). Next, 10 μL CCK-8 solution was added to each well, followed by incubation at 37° C for 2 h. Cell viability was measured using a microplate reader by recording the absorbance of each well at 450 nm.

hADSCs were cultured in 24-well plates overnight and then treated with 25 μmol LA or the vehicle control for 24 h. Next, the cells were fixed and treated with SA-β-gal kit solution. Cell staining was examined by fluorescence microscopy.

hADSCs were treated with 25 μmol LA or the vehicle control for 24 h and then incubated with ROS reagent in the dark at room temperature for 30 minutes (min). ROS levels were determined using a multi-mode microplate reader.

Telomere lengths in hADSCs were measured by qRT-PCR. hADSCs were seeded in six-well plates and treated with 25 μmol LA and the vehicle control (Ctrl) for 24 h. Briefly, total mRNA was extracted using Trizol (Thermo Fisher Scientific) and then reverse transcribed into cDNA using a reverse transcription kit. Total DNA was extracted using a DNA extraction kit. The PCR protocol was as follows: predenaturation at 95° C for 3 min followed by 43 cycles of denaturation at 95° C for 10 s, annealing at 55° C for 30 s, and extension at 72° C for 30 s. 36B4 was used as a Ctrl. qRT-PCR was performed using the Taq-Man real-time PCR system (Thermo Fisher Scientific) and SYB-Green real-time PCR system (TaKaRa). Relative gene expression levels were normalized to ACTB and calculated by the 2-ΔΔCT method. Primer sequences are listed in Table 1.

Table 1. The primer of qRT-PCR.

Briefly, cells were cultured in DMEM/F12 containing 25 μmol LA or Ctrl. At 70% confluence, cells were treated with OriCell™ differentiation media with 25 μmol LA maintained throughout the differentiation period. Alizarin Red staining was performed on day 25 for osteogenesis and Oil Red O staining on day 14 for adipogenesis. Images were obtained by microscopy.

RNA-seq was performed independently and uniformly on hADSCs treated with LA (25 μmol) or Ctrl in duplicate and cultured for 6 days in a humidified atmosphere with 5% CO2 at 37° C in DMEM/F12 supplemented with 10% FBS and 100 U/mL penicillin and streptomycin. Clean reads were aligned to the reference gene sequence using bowtie-2 and the gene expression levels of each sample were calculated. Differentially expressed gene (DEG) detection was conducted by the DEG seq method [62]. The statistical results were based on the ma-plot method. The number of reads of specific genes obtained from the sample was randomly sampled, and then p-values were calculated in accordance with the normal distribution and corrected to q-values. To improve the accuracy of DEGs, genes with a different multiple of more than double and a q-value of ≤0.001 were defined and screened as significant DEGs. RNA sequencing data generated from this study have been deposited in NCBI GEO (https://www.ncbi.nlm.nih.gov/geo) under the accession number GSE144105.

Briefly, hADSC were treated with 25 μmol LA or Ctrl for 24 h and 48 h (or 80 h) then lysed using RIPA buffer containing protease and phosphatase inhibitors at 4° C, followed by centrifugation for 10 min. The supernatant was collected and sample buffer (5×) was added at a ratio of 5:1. Samples were mixed well and boiled for 10 min, followed by storage at −40° C. Proteins were separated by 10% SDS polyacrylamide gel electrophoresis and transferred to PVDF membranes that were blocked by incubation with 2.5% dry skim milk, followed by overnight incubation with primary antibodies diluted in 2.5% dry skim milk at 4° C.

This work was supported by grants from the National Key Research and Development Program (2020YFC2002800), National Natural Science Foundation of China (Grant No 31671539), and Major Program of Development Fund for Shanghai Zhangjiang National Innovation Demonstration Zone