Copyright: © 2020 Zhang et al. This is an open access article distributed under the terms of the Creative Commons Attribution License (CC BY 3.0), which permits unrestricted use, distribution, and reproduction in any medium, provided the original author and source are credited.

Nitidine chloride (NC) possesses anticancer properties in various types of human malignancies. However, the effects of NC on lung cancer cells have not been elucidated. Moreover, the molecular mechanism of NC-involved antitumor activity is unclear. Therefore, we aimed to determine the biological effect of NC and the underlying molecular insights in lung cancer cells. The antineoplastic function of NC was assessed by MTT assays, Annexin V-FITC/PI apoptosis assay, wound healing analysis, and Transwell chamber migration and invasion assay in lung cancer cells. NEDD4 modulation was evaluated by western blotting assays of lung cancer cells after NC treatments. NEDD4 overexpression and downregulation were employed to validate the critical role of NEDD4 in the NC-mediated tumor suppressive effects. We found that NC suppressed cell viability, migration and invasion, but induced apoptosis in lung cancer cells. Mechanistic exploration revealed that NC exhibited its antitumor effects by reducing NEDD4 expression. Furthermore, our rescue experiments dissected that overexpression of NEDD4 abrogated the NC-mediated antineoplastic effects in lung cancer cells. Consistently, downregulation of NEDD4 enhanced the NC-induced anticancer effects. Thus, NC is a promising antitumor agent in lung cancer, indicating that NC might have potential therapeutic applications in the treatment of lung cancer.

Lung cancer is one of the most common malignancies worldwide. It is expected that 228,820 new cases of lung cancer will be diagnosed and 112,520 patients will die due to lung cancer in the United States of America in 2020 [1]. Although a reduction in smoking has led to a decline in lung cancer-related deaths, among all types of cancers, lung cancer is the leading cause of cancer-related death in males and females. Deaths due to lung cancer contribute to almost 25% of all cancer deaths in the USA [1]. Treatments for this disease, including surgery, chemotherapy, and immunotherapy, have been improved. However, the 5-year survival rate in lung cancer patients is approximately 19%. Thus, identification of new drugs with fewer side-effects for lung cancer treatments is urgently needed.

NEDD4 (neuronally expressed developmentally downregulated 4) has been characterized as an oncoprotein in carcinogenesis and tumor progression [2]. Several studies have demonstrated that NEDD4 is involved in lung carcinogenesis [3–5]. NEDD4 is highly expressed in 80% of non-small-cell lung carcinoma (NSCLC) tissues, as shown by immunohistochemical assays of tissue microarrays [3]. Upregulation of NEDD4 was correlated with poor prognosis in lung adenocarcinoma [5]. Moreover, NEDD4 suppression attenuated the cell proliferation of NSCLC cells, while overexpression of NEDD4 promoted cell growth in nontransformed lung epithelial cells and lung cancer cells [3]. Another study revealed that NEDD4 negatively regulated PTEN expression, promoting acquired erlotinib resistance in NSCLC [4]. Consistent with this finding, upregulation of NEDD4 is associated with chemoresistance in lung adenocarcinoma [5]. Therefore, inactivation of NEDD4 might be a useful strategy for lung cancer therapy.

Nitidine chloride (NC) has been identified as a phytochemical alkaloid that possessed antifungal, antioxidant and anticancer properties [6]. Accumulated evidence has suggested that NC exerts a tumor suppressive effect via targeting multiple signaling pathways in various human cancers [6]. NC reduced the cell migratory and invasive ability by repressing the c-Src/focal adhesion kinase (FAK) pathway in mammary carcinoma [7]. NC inactivated the signal transducers and activators of transcription 3 (STAT3) signaling pathway and caused attenuation of cell proliferation and angiogenesis in gastric cancer [8]. Similarly, NC suppressed the Janus kinase 1 (JAK1)/STAT3 pathway and caused cell growth inhibition in hepatocellular carcinoma [9]. One study reported that nitidine exhibited cytotoxicity in A549 lung adenocarcinoma cells [10]. Moreover, downregulation of ABCA1 (ATP-binding cassette transporter A1) promoted the cytotoxicity of nitidine in lung cancer cells [10]. However, the effects of NC on lung cancer cells are elusive. Moreover, the underlying molecular mechanisms of NC-mediated antitumor activity need to be explored. Therefore, in the current study, we aimed to elucidate the biological effect and mechanism of NC in lung cancer cells. Our results demonstrated that NC possessed anticancer activity via suppression of NEDD4 in lung cancer. 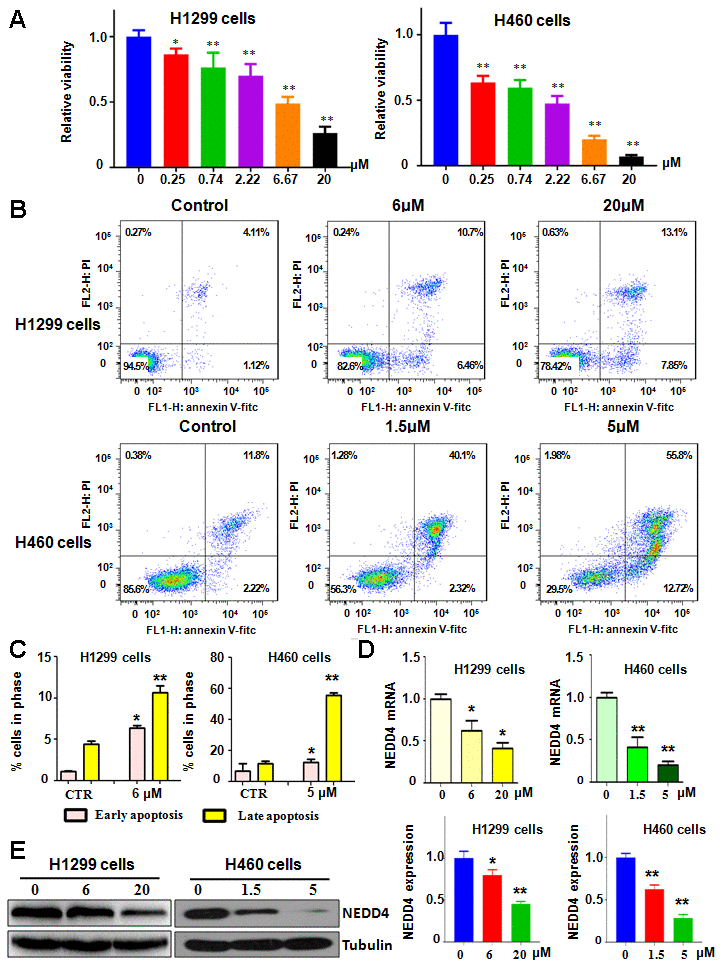 Figure 1. NC regulates cell viability and apoptosis. (A) The Effects of NC on the viability of lung cancer cells for 72 h were measured using the MTT assay. *P<0.05, **P<0.01 vs the control. (B) Cell apoptotic death in lung cancer cells with NC treatment at 72 h was tested by the Annexin V-FITC/PI approach. (C) Early and late apoptosis rates were presented for panel B. (D) Early NEDD4 mRNA level was detected by RT-PCR in cells with NC treatment for 72 h. (E) Left panel: NEDD4 levels were examined by western blotting in lung cancer cells with NC exposure for 72 h. Right panel: Quantitative data are presented for NEDD4 levels. *P<0.05,**P<0.01, vs the control.

NEDD4 functions as a key oncoprotein in carcinogenesis. We explored whether NC performed cell viability inhibition via downregulation of NEDD4 in lung cancer cells. To achieve this aim, we used RT-PCR and western blotting analysis to assess the expression of NEDD4 in H1299 and H460 cells after NC treatments. Our data showed that NC suppressed the expression of NEDD4 at both mRNA and protein levels in both H1299 and H460 cells (Figure 1D, 1E). This finding indicates that NEDD4 inhibition by NC could be a reason for the NC-mediated suppression of cell viability.

NEDD4 governs cell motility in tumor cells. Therefore, we tested whether NC inhibited NEDD4 expression and led to suppression of migration and invasion of lung cancer cells. Our wound healing assay showed that NC exposure resulted in retardation of wound closure in both H1299 and H460 cells (Figure 2A). Transwell chamber migration and invasion assays dissected that NC exposure attenuated the cell migratory and invasive activity of H1299 and H460 cells (Figure 2B). Altogether, the mobility of lung cancer cells was decreased with NC treatment. 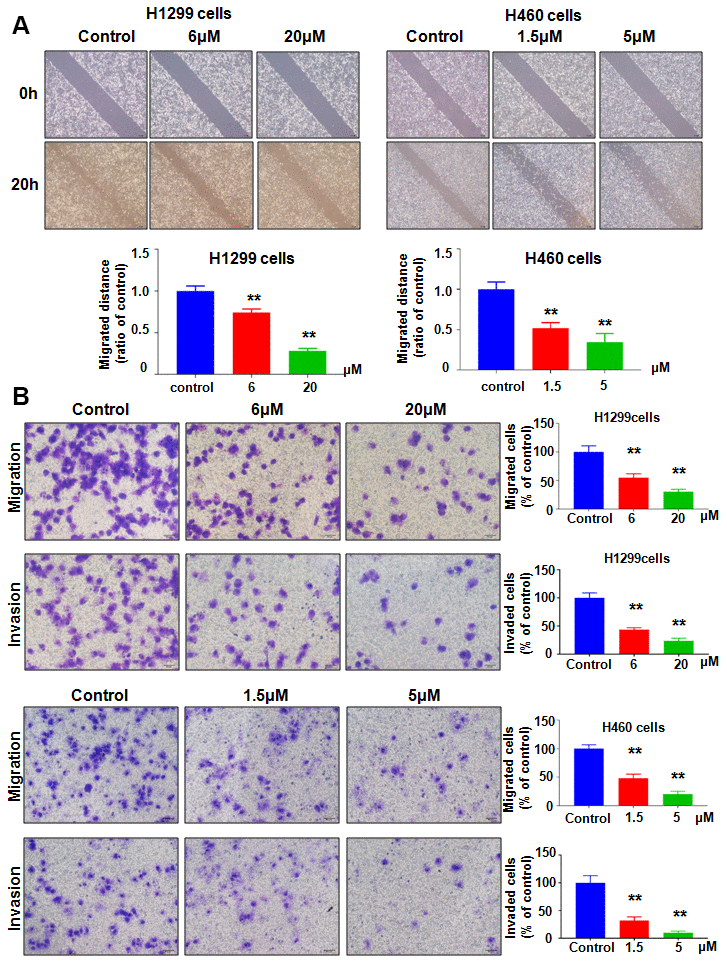 Figure 2. NC regulates cell migration and invasion. (A) Top panel: A wound healing assay was used to measure the motility of lung cancer cells. Bottom panel: Quantitative data are presented for wound healing. **P<0.01 vs the control. (B) Left panel: Migration and invasion were measured in lung cancer cells treated with NC for 24 h. Right panel: Quantitative data are presented for motility. **P<0.01 vs the control.

Overexpression of NEDD4 neutralized the anticancer effects of NC 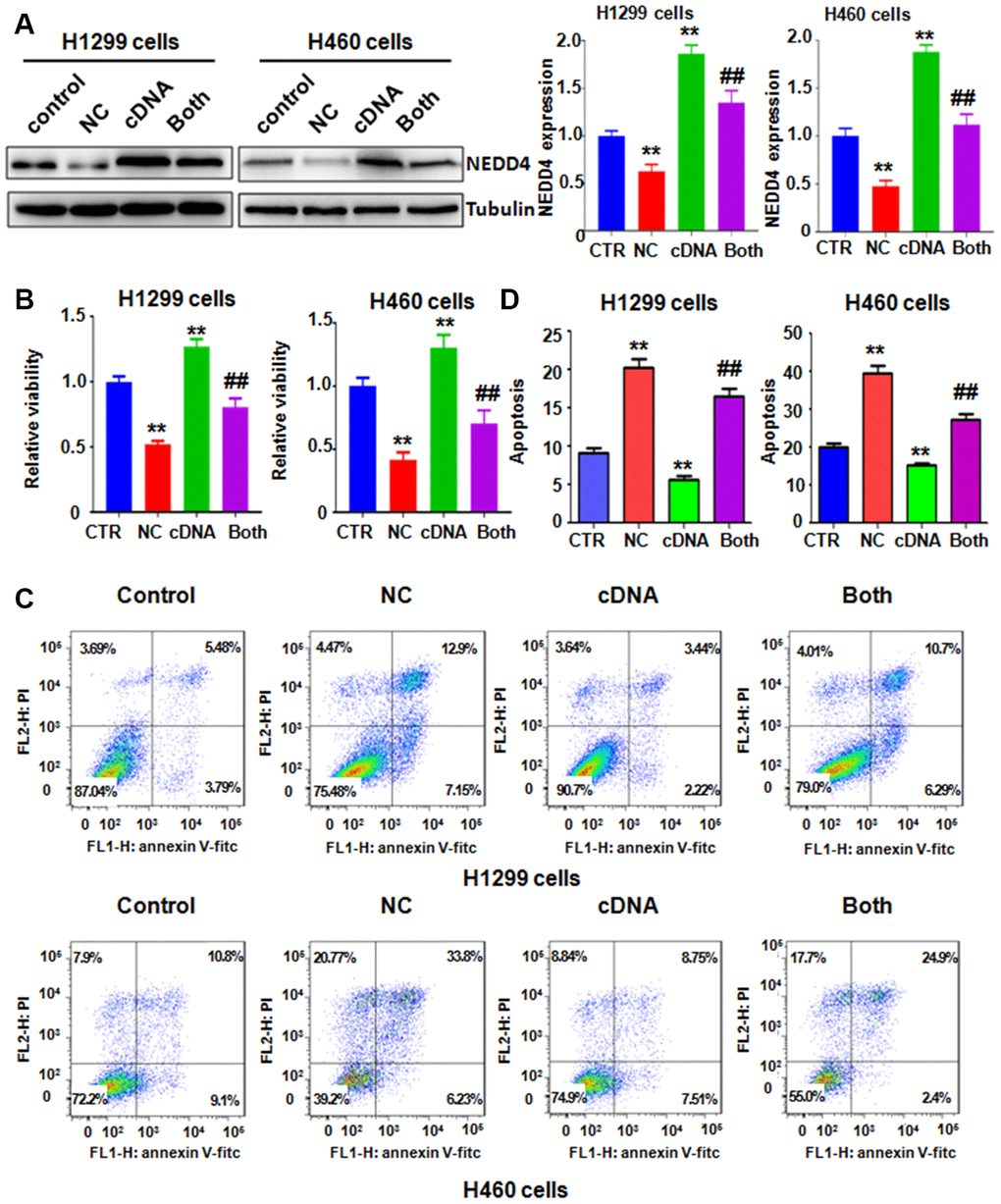 Figure 3. NEDD4 overexpression rescues NC-mediated cell growth suppression and apoptosis. (A) Left panel: NEDD4 expression was tested by immunoblotting in lung cancer cells with NEDD4 plasmid transfection plus NC treatment. Right panel: Quantitative data are shown for NEDD4 levels. **P<0.01, vs the control; ##p<0.01, vs NC only or NEDD4 plasmid transfection only. CTR: control; NC: Nitidine chloride; cDNA: NEDD4 cDNA vector; Both: NEDD4 cDNA plus NC. (B) The MTT assay was carried out to test the viability of lung cancer cells after NEDD4 overexpression and NC treatment. (C) Apoptosis of lung cancer cells was examined by flow cytometry after the combination treatment. (D). Apoptosis rates were presented for panel C. 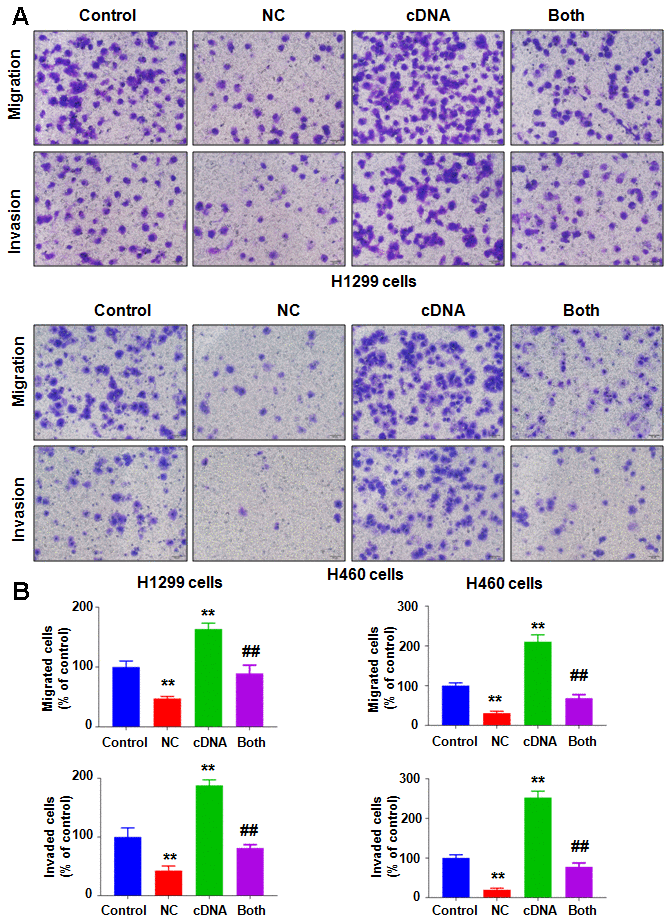 Figure 4. Overexpression of NEDD4 attenuates NC-involved inhibition of cell motility. (A) Cell migration and invasion were evaluated in lung cancer cells after the combination treatments. (B) Quantitative data are shown for panel A. **P<0.01, vs the control; ##p<0.01, vs NC only or NEDD4 plasmid transfection only.

Downregulation of NEDD4 promotes the antitumor activity of NC 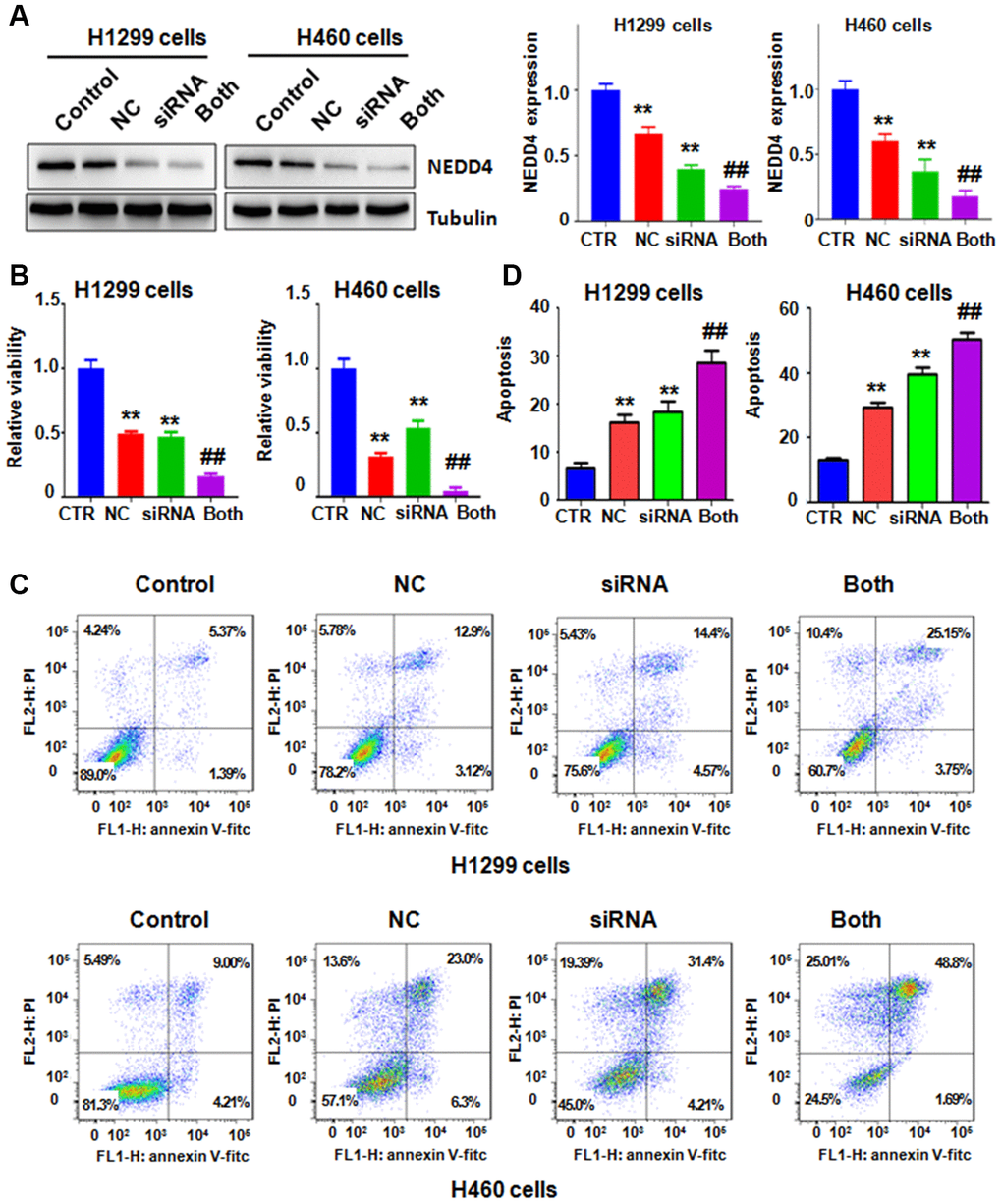 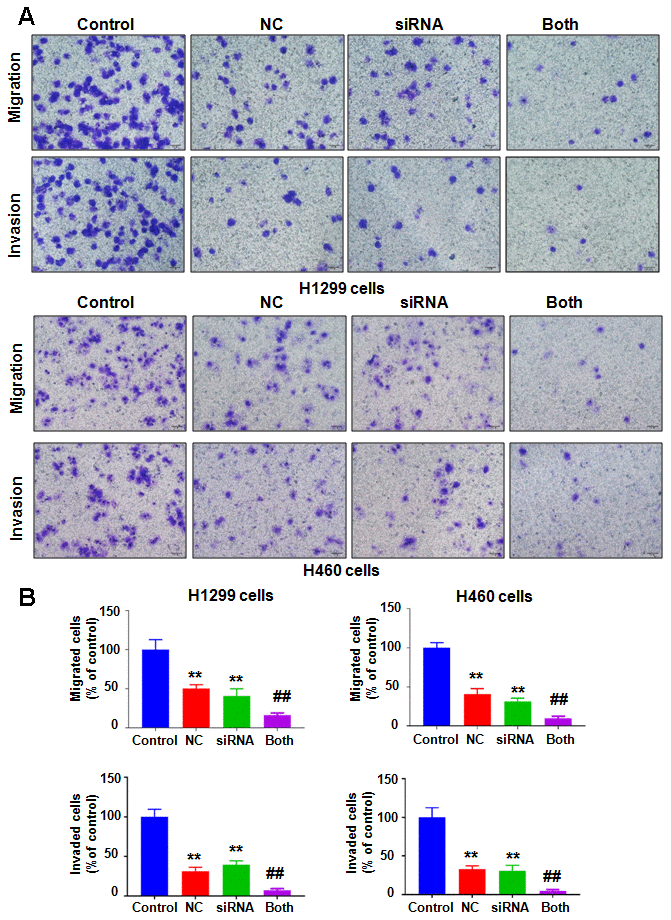 Figure 6. Downregulation of NEDD4 enhances NC-involved inhibition of cell motility. (A) Cell migration and invasion were evaluated in lung cancer cells after combination treatments. NC: Nitidine chloride; siRNA: NEDD4 siRNA; Both: NEDD4 siRNA plus NC. (B) Quantitative data are shown for motility. **P<0.01, vs the control; ##p<0.01, vs NC only or NEDD4 siRNA transfection only.

Evidence has revealed that NEDD4 plays a critical role in the development and progression of human cancer, including NSCLC [2, 3]. One group reported that NEDD4 knockdown reduced proliferation, migration and invasion in A549 lung cancer cells via targeting phosphatase and tensin homolog (PTEN) and the phosphatidylinositol 3-kinase (PI3K)/Akt pathway [5]. Moreover, this group found that NEDD4 downregulation enhanced the chemosensitivity of A549 cells to cisplatin and paclitaxel [5]. Another group observed that knockdown of NEDD4 decreased EGF-induced cell migration via suppression of cathepsin B lysosomal secretion in NSCLC cells [11]. Because NEDD4 acts as a tumor promoter in NSCLC, inactivation of NEDD4 might be a potential treatment for NSCLC patients.

Several groups have reported that multiple natural compounds inhibit the expression of NEDD4 in a variety of human cancers [27–30]. Indole-3-carbinol had antiproliferative effects via binding with NEDD4 and subsequently impairing PTEN degradation in melanoma cells. [28] I3C analogs disrupted cell proliferation via suppression of NEDD4 ligase activity in melanoma cells [27]. Paeoniflorin downregulated the expression of NEDD4 and led to antitumor effects on nasopharyngeal carcinoma cells [29]. Diosgenin exerted its anticancer function via downregulation of NEDD4 in prostate cancer cells [30]. In the current study, we used a cell line system to define the biological function of NC in vitro via modulation of NEDD4 in NSCLC. Whether NC attenuated tumor growth in mice via suppression of NEDD4 needs to be determined, which could be helpful for the potential use of NC in clinical trials in the future. In summary, NC might be a promising inhibitor of NEDD4 in NSCLC.

H1299 and H460 lung cancer cells were purchased from the Chinese Academy of Science Cell Bank (Shanghai, China). H1299 cells and H460 cells were cultured in RPMI-1640 medium with 10% FBS and 1% penicillin/streptomycin. Cells were incubated in a humidified environment with 5% CO2 at 37° C.

Cells were seeded onto 96-well plates for 12 h and then exposed to various doses of NC or transfected with NEDD4 siRNA or cDNA plasmid for 72 h. Cell viability was detected by MTT assays.

Cells were seeded in 6-well plates for 12 h and then treated with different doses of NC for 72 h. Cell apoptotic death was detected via measuring cells stained with both FITC-Annexin V and propidium iodide (PI) by flow cytometry. FlowJo software was used to calculate the apoptosis rate.

Cells were incubated in 6-well plates until cells became more than 90% confluent. A yellow sterile pipette tip was used to scratch a wound, and cells in the supernatant were removed by washing. The cells were exposed to various doses of NC for 20 h. The wound fields were captured by a microscope when cells were treated with NC for 20 h.

Cells were lysed, and proteins were extracted. Then, protein amounts were measured by BCA assay. Protein was separated by SDS-PAGF and transferred onto PVDF membranes. Anti-NEDD4 antibody was purchased from CST Company (Danvers, MA, USA). Western blotting was performed as described previously [26].

There are no conflicts of interest.

This work is supported by the Key Project of Natural Science Foundation of Anhui Provincial Department of Education (P.R. China) (KJ2018A0237) and the Program for Graduate Research of Bengbu Medical College (Byycx1913).