Copyright: © 2021 Ji et al. This is an open access article distributed under the terms of the Creative Commons Attribution License (CC BY 3.0), which permits unrestricted use, distribution, and reproduction in any medium, provided the original author and source are credited.

Breast cancer (BC) is a major disease that threatens women's health. The incidence (24.2%) and mortality (15.0%) are higher than other cancers worldwide for females based on GLOBOCAN database (2018) [1]. In recent years, more diagnostic and therapeutic methods of BC have been developed. However, the incidence rate and death rate of BC have not decreased [2]. Metastasis, recrudescence, and drug resistance are very common in BC and have caused many relative deaths. Therefore, exploring the molecular mechanism of BC is still a vital task.

Recent studies indicated that non-coding RNAs (ncRNAs) take part in mediating BC genesis and progression [3]. MicroRNAs (miRNAs), such as miR-200b, miR-497, and miR-21, regulate BC-related gene expression mainly through post-transcriptional ways [4–6]. Long non-coding RNAs (lncRNAs) including lncRNA LINK-A and lncRNA POU3F3 affect the genesis, metabolism, proliferation, and apoptosis of BC [7, 8]. Circular RNAs (circRNAs) are novel ncRNAs with closed continuous loops formed by back splicing [9]. The first circRNA was discovered in 1976. At that time, circRNAs were regarded as mis-splicing or by-products of pre-mRNA processing for a long while [10, 11]. Nowadays, a great number of circRNAs have been detected and their biological functions are partly uncovered. The underlying mechanism of circRNAs' functions mainly includes miRNA or protein sponges, enhancer of protein function, protein scaffolding, protein recruitment, and templates for peptides translation [12]. As for tumors, some studies revealed that circRNAs could participate in tumorigenesis and they may be the potential biomarkers and therapeutic targets of cancers [10, 12]. Therefore, the regulatory function of circRNAs in BC is worthy to study.

PDCD4 (Programmed Cell Death 4), was cloned from the human library by Matsuhashi's group in 1997 [13]. Then in 1999, PDCD4 was firstly described as a tumor suppressor by Cmarik's group, which found that PDCD4 could inhibit neoplastic transformation in mouse JB6 cells [14]. The human PDCD4 gene is located on chromosome 10q24 and encoded by 185 amino acids. In recent years, PDCD4 has been found to participate in the oncogenesis and progression of BC cells [15, 16]. Study on enhancing the activity of PDCD4 may bring an advance in the treatment of BC [17].

In this study, we found a highly expressed circRNA in BC, hsa_circ_0053063 and then we exposed it as a tumor suppressor via negative regulating miR-330-3p expression to activate PDCD4. This provided new insight into BC treatment.

Characterization of hsa_circ_0053063 in BC cells 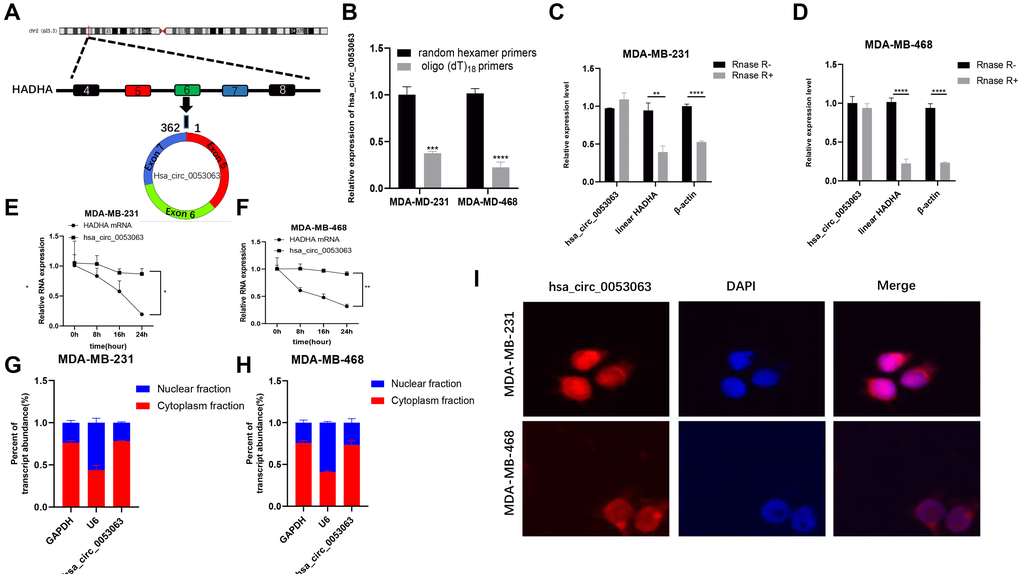 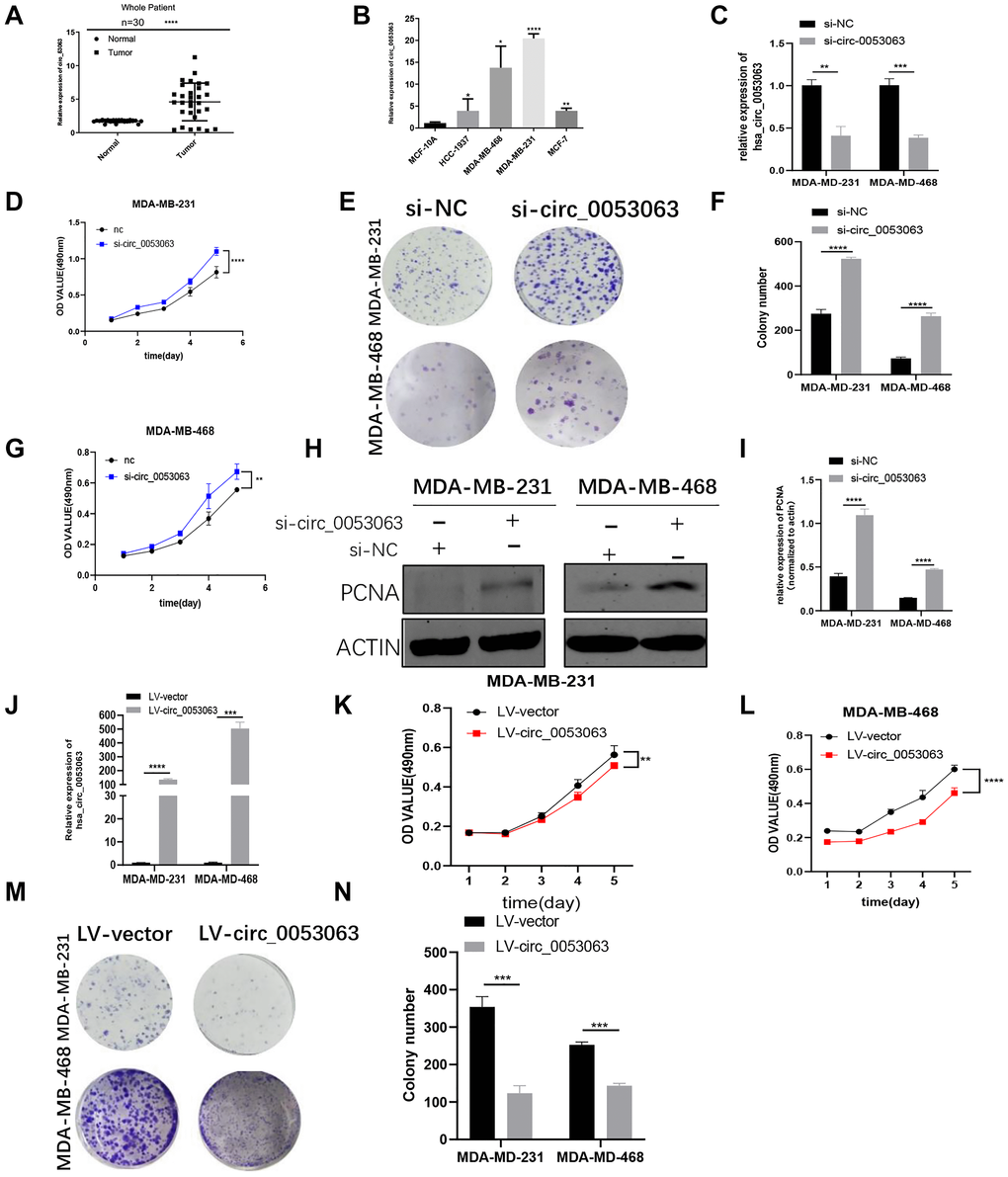 Table 1. The relationship between the expression of has_circ_0053063 and various clinicopathological variables. 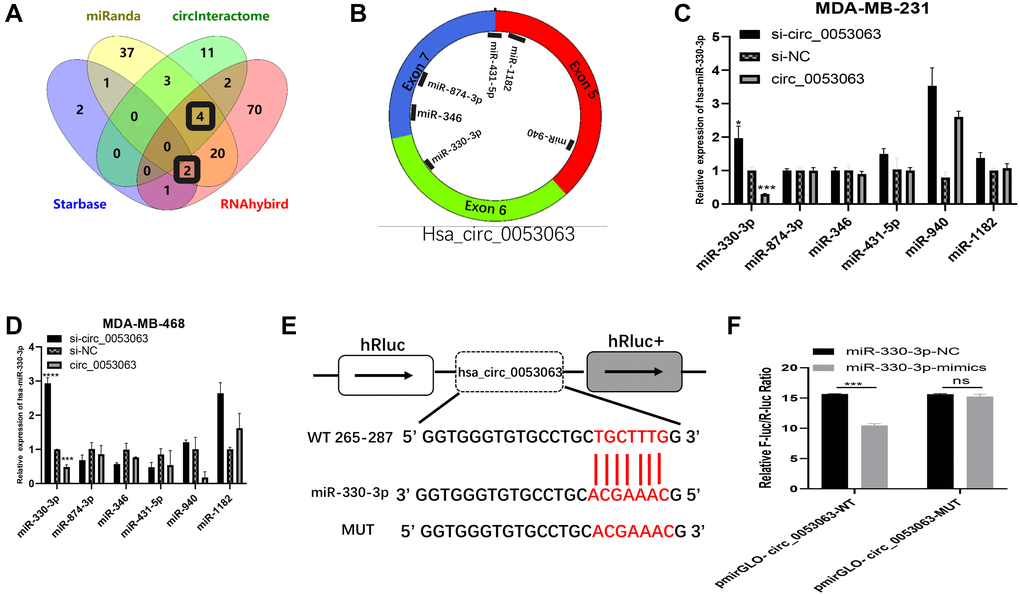 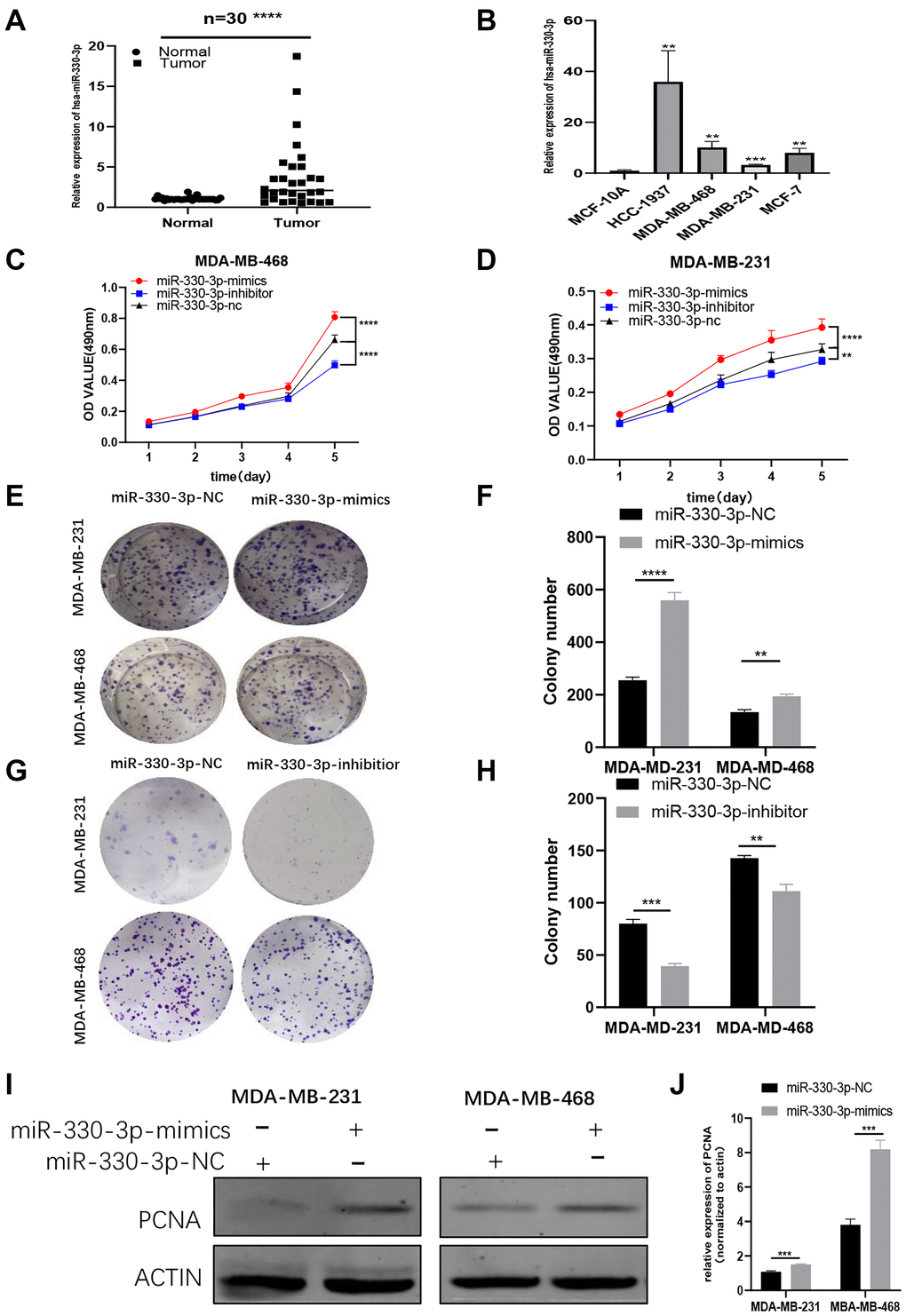 PDCD4 served as a molecular target of miR-330-3p

We found PDCD4 was a putative target of miR-330-3p by TargetScan (http://www.targetscan.org/vert_71/). It has been proved that PDCD4 is a target gene of miR-330-3p in human esophageal cancer [18]. Results from qRT-PCR demonstrated that PDCD4 presented with low expression in BC patient tissues and BC cell lines (Supplementary Figure 1B–1C). So we conjectured that hsa_circ_0053063 inhibits BC cell proliferation through targeting the miR-330-3p/PDCD4 axis in BC. Through dual-luciferase assays, we confirmed that PDCD4 was the direct target of miR-330-3p (Figure 6A). The wild and mutant dual-luciferase reporter plasmids of PDCD4 were constructed, and the data indicated that miR-330-3p mimics reduced the luciferase activity of the PDCD4-WT luciferase reporter but not that of mutant ones (Figure 6B). Then, PDCD4 expression was tested in both BC tissues and cell lines through qRT-PCR, which results demonstrated that PDCD4 was low-expressed in BC (Figure 6C–6D). Furthermore, to verify the function of PDCD4 in BC, PDCD4 siRNA was used to transfect BC cell lines. Through MTT and colony formation assays, the results indicated that PDCD4 could inhibit cell proliferation in BC (Figure 6E–6H). 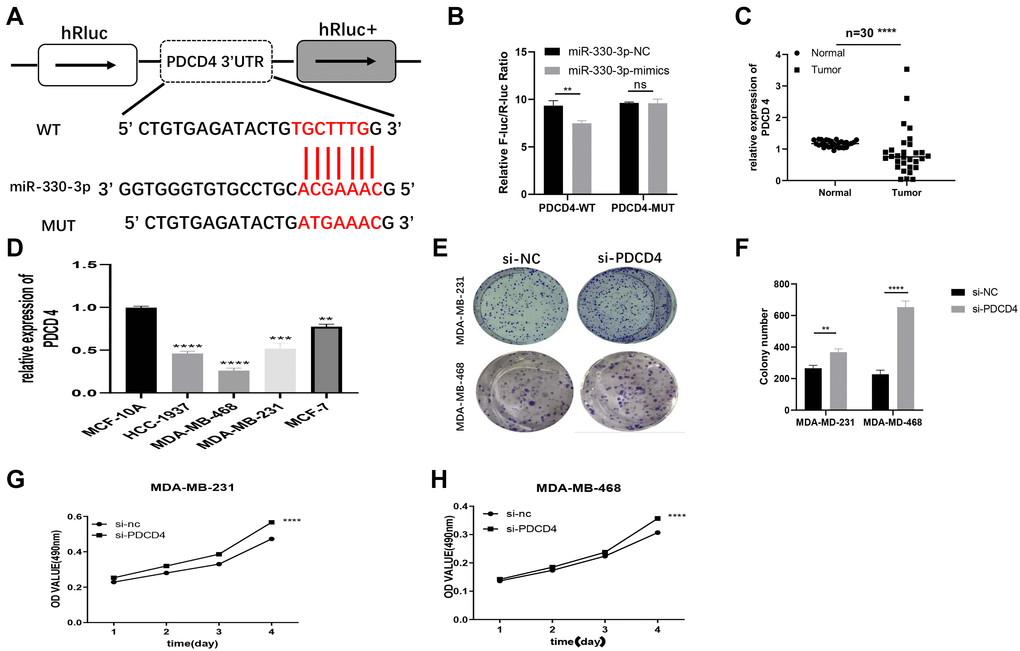 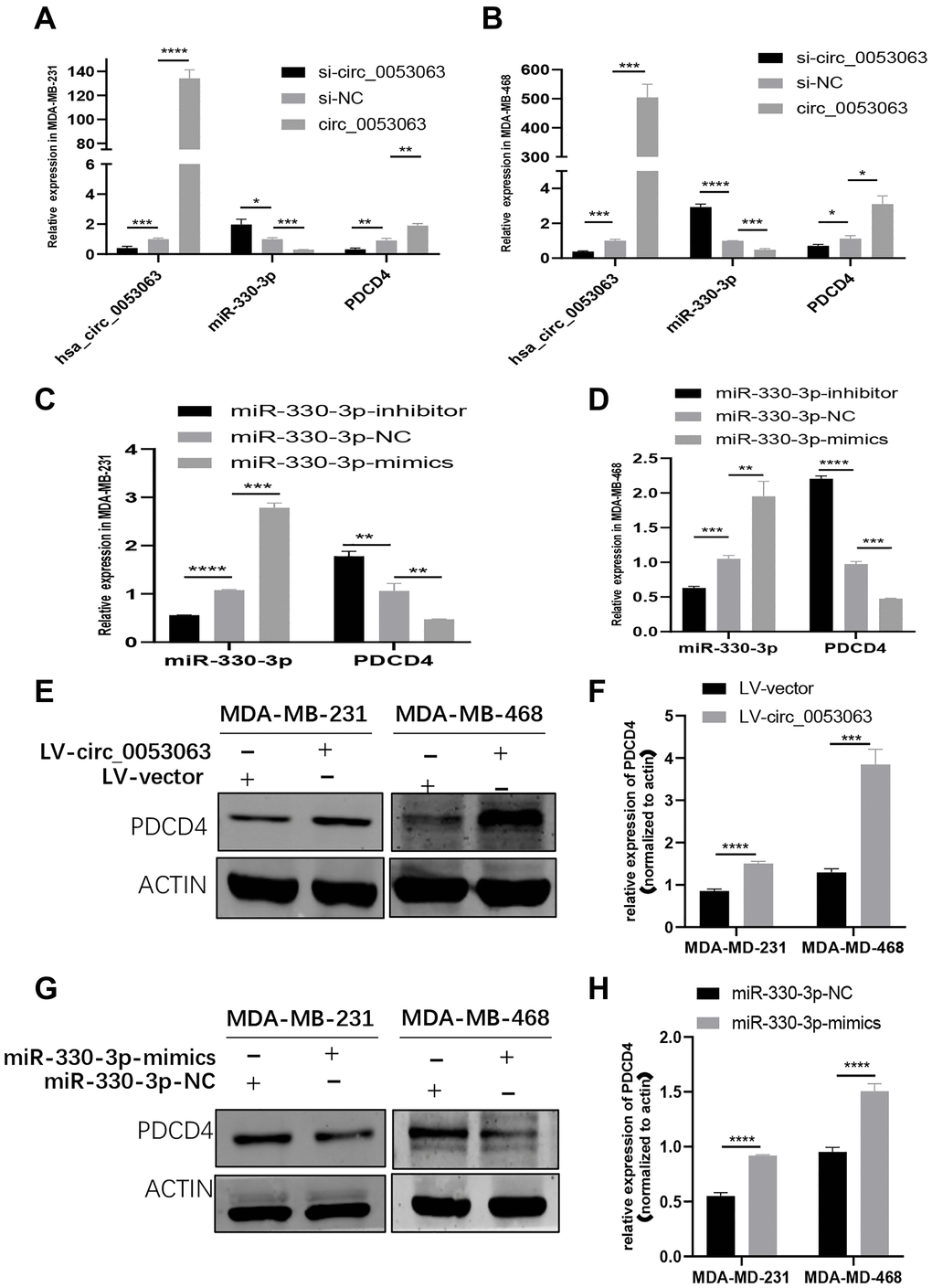 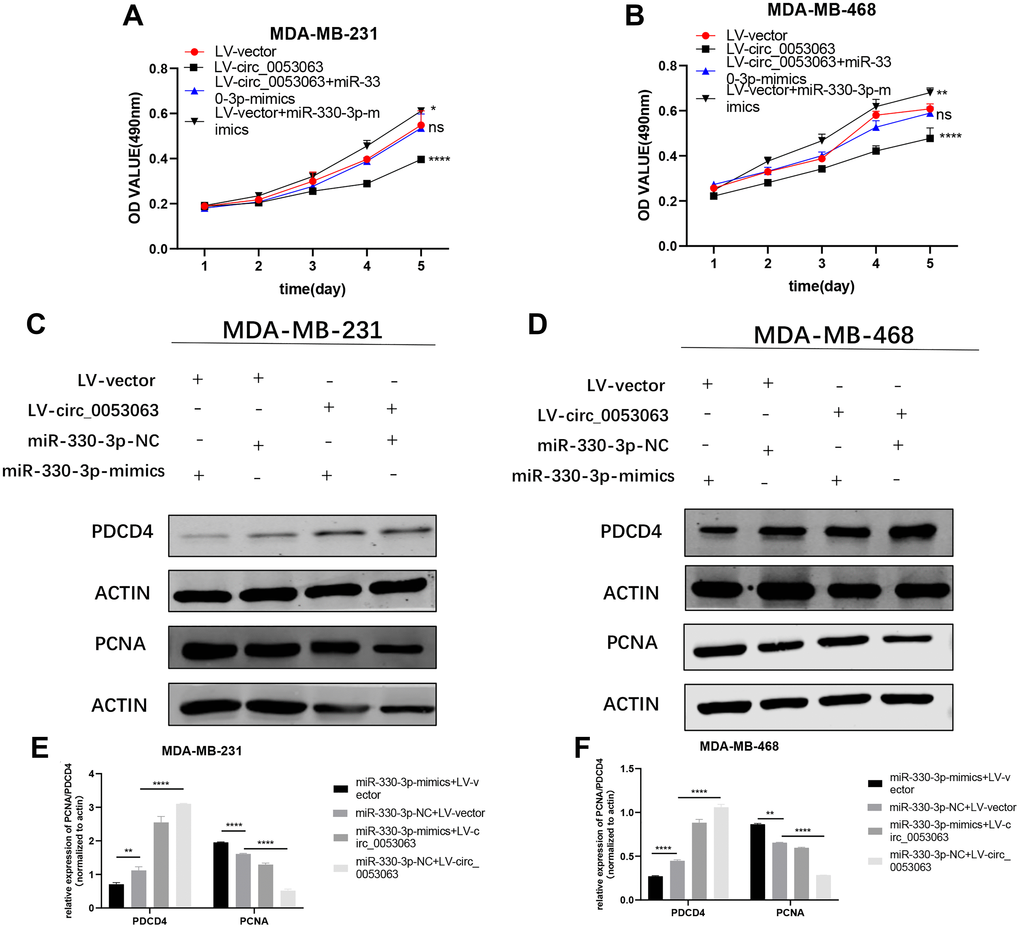 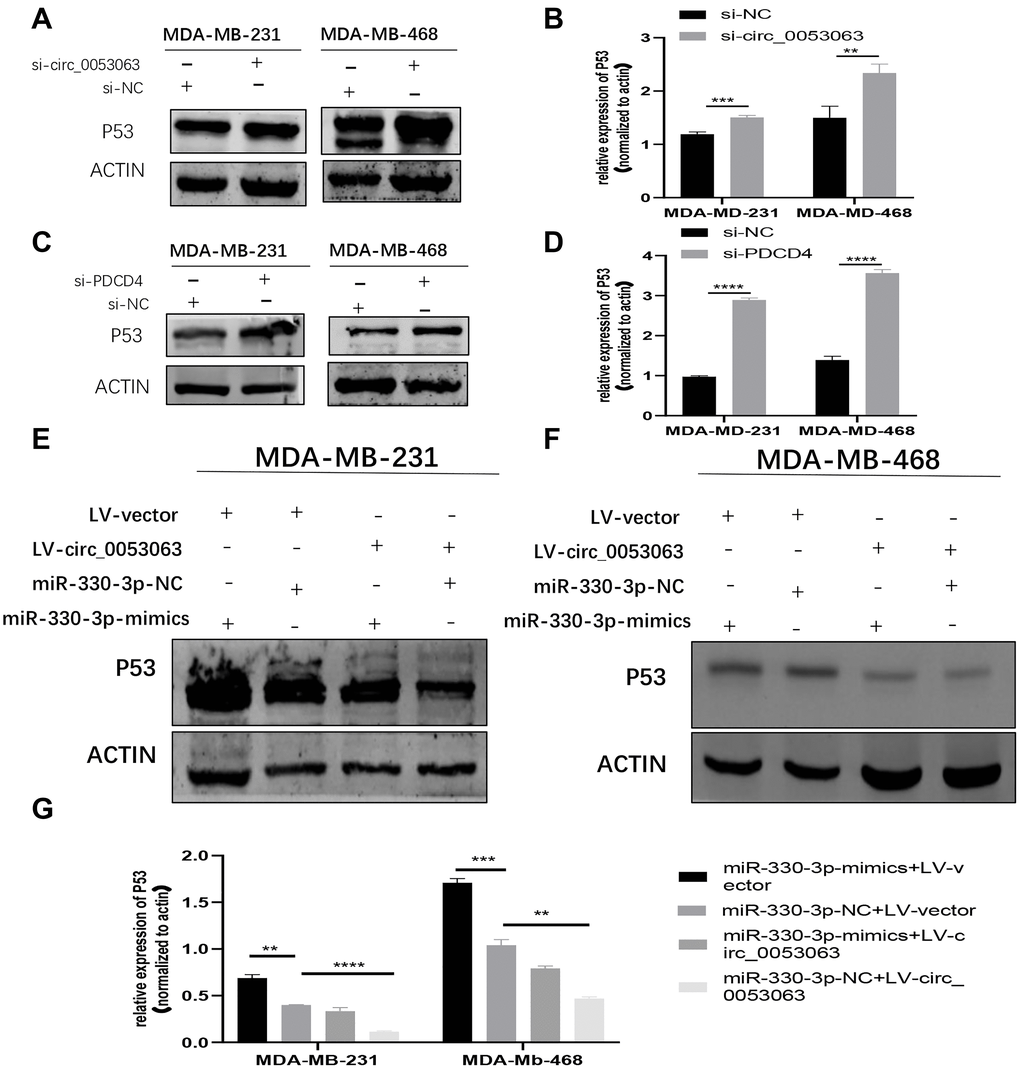 Taken together, hsa_circ_0053063 inhibits the expression of miR-330-3p, thus it could activate one of miR-330-3p's downstream genes PDCD4 through targeting miR-330-3p. So hsa_circ_0053063 generated the anti-oncogenic function in BC cells via regulating miR-330-3p/PDCD4 axis. The mechanism diagram illustrates how this axis works and this study provided a new clinical diagnostic and therapeutic target of BC (Figure 10). 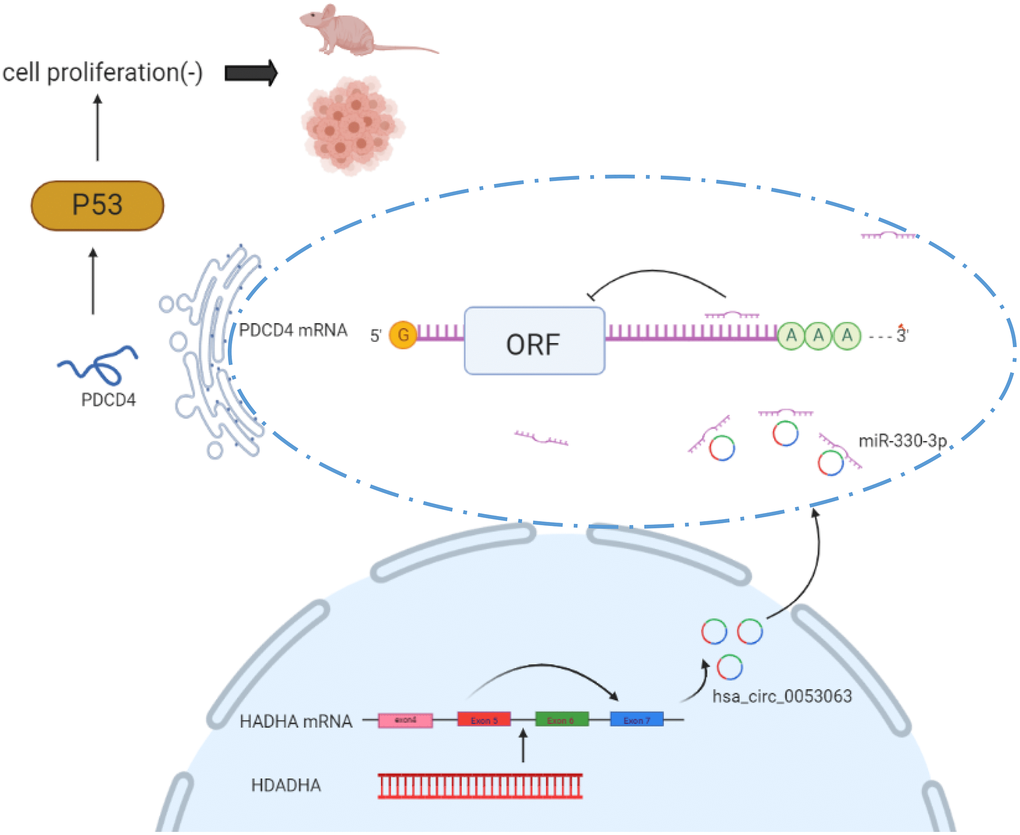 First found in viruses, then proved to be presented in eukaryotic cells, circular RNAs (circRNAs) are a species of non-coding RNAs with covalently closed-loop structure, which provides its stability characteristics [11, 20]. Studies from the past several decades have revealed the function of part of circRNAs so that plentiful circRNAs have been uncovered to be vital in biological progress and may participate in the development of cancers [21, 22]. CircRNAs have no 5' caps and 3' ploy-A tails causing their stability and long half-life [23]. Based on the above advantages, circRNAs may serve as better diagnostic biomarkers than other ncRNAs.

More and more evidence has been put forward on how circRNAs work as a miRNA sponge to execute its function to influence tumor progression [24]. For example, the miR-29b family was decoyed by circRNA_100290 to regulate CDK6 expression [25]. Also, circRNAs as a regulatory factor and a valuable diagnostic marker of BC have been proved. For instance, circ_0001667 promoted BC cell proliferation and survival via regulating TAZ to influence the hippo pathway [26], hsa_circ_0001982 promoted BC cell carcinogenesis through diminishing miR-143 [27].

P53 has been considered as an identified translational target of PDCD4 [19]. Further studies have proved that hsa_circ_0053063 could inhibit the P53 protein level through the miR-330-3p/PDCD4 axis.

Therefore, the discovery of hsa_circ_0053063 provides a PDCD4 accelerator, which may be a new diagnostic target and beneficial for BC patients in the further.

In conclusion, we found a novel circRNA that is highly expressed in BC, hsa_circ_0053063. We revealed its underlying mechanism as a tumor suppressor to activate PDCD4 via serving as a sponge of miR-330-3p. These experiential results imply a new potential biomarker or therapeutic target for BC.

30 pairs of tumor tissues and matched normal tissues from BC patients undergoing surgery were obtained from the Department of Breast and Thyroid Surgery of Shanghai Tenth People's Hospital (Shanghai, China). The clinical samples were immediately stored in liquid nitrogen after surgery. All patients had received no anti-tumor therapy before and the details of their clinical information were available. Both tumor tissue and adjacent non-tumor tissue were confirmed by specialized pathologists. Consents were given and this study was approved by the Institution Ethics Committees of Shanghai Tenth People's Hospital.

Total RNA from MDA-MB-231 and MDA-MB-468 cell lines were treated with RNase R (4 U/mg, Epicenter) according to the manufacturer’s instruction and detected by the qRT-PCR assay.

About 2000 transfected MDA-MB-231 and MDA-MB-468 cells were planted into 96-well-plates per well. The MTT assay kit (Sangon, Shanghai, China) was used to determine cell viability at 24 h, 48 h, 72 h, and 96 h. The crystal was dissolved in 150 μl dimethylsulfoxide (DMSO, Sangon, Shanghai, China) after 4-hours-incubation together with MTT reagent and the optical density (OD) value was measured at 490 nm using a microplate spectrophotometer (BioTek, Vermont USA).

Transfected MDA-MB-231 and MDA-MB-468 cells were incubated for 10–14 days after seeding into 6-well-plates (500 cells per well). When the cell colonies were visible, the plates were washed twice with phosphate-buffered saline (PBS, Sangon, Shanghai, China). The washed cell colonies were then fixed in 95% ethanol and stained with 0.1% crystal violet. Colony number was counted immediately after taking photographs.

PmirGLO-hsa_circ_0053063 and pmirgGLO-PDCD4 mutant and wild-type reporter plasmids were purchased from Integrated Biotech Solutions (Shanghai, China). 293T cells were planted in 24-well plates. When the confluency of the cells reached 80%, these plasmids were transfected as the transfection procedures used as above. After 24 hours, Dual-Luciferase Reporter Assay (Promega, Madison, WI, USA) was used to detect firefly and Renilla luciferase activities. Finally, the ratio of firefly/Renilla was calculated.

Total proteins of cells were extracted by RIPA buffer (Beyotime, Shanghai, China) on the ice. The supernatants were obtained after centrifuging at 4ºC, 12000 rpm for 30 min. The bicinchoninic acid (BCA) protein assay kit (Beyotime, Shanghai, China) was used to determine the concentration of proteins. The 6 × sodium dodecyl sulfate (SDS) loading buffer was added into proteins and the mixtures were boiled at 100ºC for 10 min for protein denaturation. Equal masses of proteins from each sample were separated by electrophoresis on a 10% polyacrylamide SDS gel (Beyotime, Shanghai, China). The proteins were transferred onto 0.45 μm nitrocellulose membranes (Beyotime, Shanghai, China) and then blocked by 5% non-fatty milk for an hour. Primary antibodies were added to the membranes and incubated overnight. After washing 3 times (10 min per time) in PBST, (PBS with 0.1% Tween20), the blots were incubated with the secondary antibody (anti-mouse or anti-rabbit) for 60 min at room temperature. After washing with PBST, the membranes were detected by an Odyssey Scanning system (Li-Cor, USA) and measured by ImageStudio.

The fluorescence in situ hybridization (FISH) probe of hsa_circ_0053063 was purchased from RiboBio (Guangzhou, China). The process of FISH followed the manufacturer’s instructions. 4', 6-Diamidino-2-Phenylindole (DAPI) was used for nuclear staining. The photographs were captured by the Thermo Fisher microscope (Thermo Fisher Scientific, Massachusetts, USA).

The immunohistochemical assay was performed on formalin-fixed, paraffin-embedded (FFPE) nude mouse tissues. FFPE slides were cut and prepared. Antibody PDCD4 was used to do IHC following the protocol. The slides of two groups were observed under the microscope, and five different views were photographed randomly per slide.

4–6 weeks old athymic female nude mice which weighed between 18 to 22 g were ordered from the laboratory animal center of Shanghai. Almost 1 × 106 MDA-MB-231 transfected with lv-circ_0053063 or lv-NC were injected into the second mammary fat of each mouse (4 mice per group). Then, tumor size was measured and calculated every week. After 35 days, they were executed and their tumor lumps were collected immediately.

The datasets used and analyzed during the current study are available from the corresponding author on reasonable request.

Animal experiments were conducted in mice using protocols approved by the Ethics Committee of Shanghai Tenth People's Hospital of Tongji University, and written informed consent was obtained from all patients or their relatives.

All authors read and approved the final manuscript.

The authors would like to acknowledge the helpful comments on this paper received from the reviewers.

This work was supported by the National Natural Sciences Foundation of China (grant no. 82073204), the Shanghai Municipal Health Bureau of Shanghai, China (Grant Number: 201640097), and the Shanghai Science and Technology Commission Guidance Project (Grant Number: 17411967200).