The mechanisms underlying the development of neuropathy associated with diabetes mellitus are not fully understood. Resveratrol, as a nonflavonoid polyphenol, plays a variety of beneficial roles in the treatment of chronic diseases such as Alzheimer's disease, coronary heart disease and obesity. In our study, the role of nuclear erythroid 2-related factor 2 (Nrf2) in resveratrol-mediated protection against streptozotocin-induced diabetic peripheral neuropathy (DPN) was investigated, and the antioxidant effect of resveratrol in diabetic peripheral nerves was studied. The STZ-treated model mice were divided into two groups. The resveratrol group was intragastrically administered 10 ml/kg 10% resveratrol once a day until the 12th week after STZ injection. The vehicle-treated mice were injected with the same volume of DMSO. Analysis of the effects of resveratrol in DPN revealed the following novel findings: (i) the pain and temperature sensitivities of diabetic mice were improved after treatment with resveratrol; (ii) Nrf2 expression was increased in the diabetic peripheral nerves of resveratrol-treated mice, and NF-KB pathway inhibition protected nerves upon resveratrol treatment in peripheral neuropathy; and (iii) resveratrol modulated the anti-inflammatory microenvironment of peripheral nerves by increasing Nrf2 activation and the expression of p-p65, and these changes may have been responsible for the neuroprotective effect of resveratrol in DPN, which was confirmed by Nrf2 knockout in diabetic mice. Overall, this study demonstrates that resveratrol may attenuate the severity of DPN by protecting peripheral nerves from apoptosis by inhibiting the NF-KB pathway and increasing Nrf2 expression.

Diabetic peripheral neuropathy (DPN), a complication of diabetes mellitus (DM), is the most common clinical peripheral neuropathy, with a prevalence of 50–60% [1, 2]. The main clinical symptoms are symmetrical pain and sensory abnormalities in the distal extremities. DPN occurs in various types of diabetes, and the condition worsens gradually with age [3]. DPN seriously affects the quality of life of patients with diabetes. However, keeping blood sugar levels stable is the only recommendation for preventing and alleviating symptoms [4]. It is extremely important to further understand the pathogenesis of DPN and find an effective drug.

The pathogenesis of DPN is not fully understood. In the course of DM, the accumulation of peroxides and the activation of the polyol pathway promote cellular metabolic disorders. In the peripheral nerves, DPN is characterized by Schwann cell metabolic dysfunction and a lack of neurotrophic support. Persistent abnormal metabolism and cAMP levels leads to Schwann cell apoptosis in the peripheral nerves [5, 6]. Long-term high glucose levels in the body lead to excessive production of highly active molecules, such as active nitrogen and reactive oxygen species, in the peripheral nerves and oxidation to a degree that exceeds the scavenging ability of the body, resulting in a series of oxidative stress reactions [7].

As a classic signaling pathway, the NF-KB signaling pathway is widely involved in the expression and regulation of genes related to cell survival, proliferation and differentiation and plays an important role in inflammation, cell proliferation, oxidative stress, and apoptosis. The activation of the NF-KB pathway is closely related to inflammation, autoimmune diseases, tumors and other diseases [14, 15]. Previous studies on pancreatic cancer cells have found that blocking the interaction between keap1 and Nrf2 results in Nrf2 accumulation in the nucleus, a change in activation of the NF-KB pathway and resistance to malignant cell proliferation [16]. In a model of subarachnoid hemorrhage, NF-KB pathway activation is inhibited, the expression levels of TNF-α and IL-1β are decreased and the protein expression of keap1, Nrf2, and HO-1, which play a protective role in neurons, is increased [6, 17].

Resveratrol has low toxicity and widespread effects, so it has become a popular focus of many research fields at home and abroad. Recent studies have shown that resveratrol has antioxidative and immunoregulatory effects. In DM, long-term high glucose levels in the body lead to oxidative stress in the peripheral nerves [7]. In this study, the role of resveratrol in DPN was further explored, and the antioxidant effect of resveratrol in diabetic peripheral nerves was studied. Inflammation plays an important role in the development of diabetes. In our mouse model of DPN, the relationship between Nrf2 and NF-KB was further investigated by regulating the activation of the Nrf2 pathway. 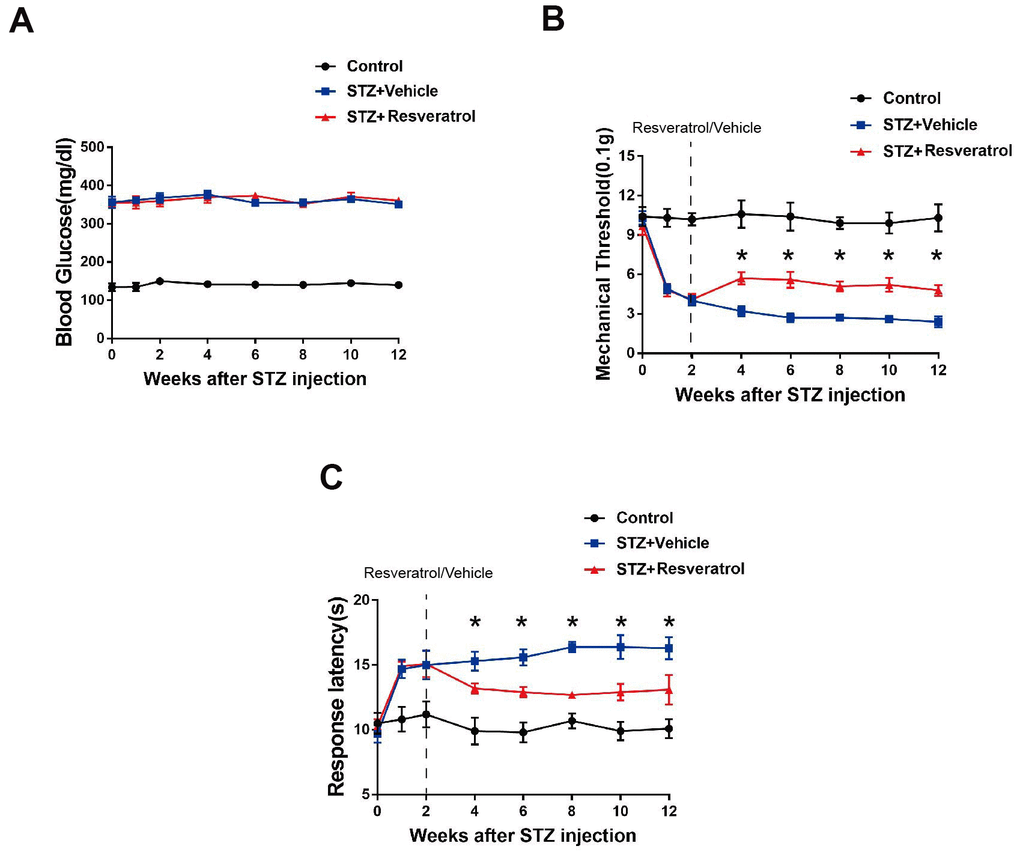 Figure 1. (A) Effect of fisetin on blood glucose in STZ+Vehicle and STZ+Resveratrol mice. (B) Mechanical nociceptive thresholds: ordinates represent the filament weight (0.1g) in which the animal responds in of presentations. (C) Thermal nociceptive threshold: the axis of ordinates represents the time (seconds) the animal takes to withdraw its paw. (Control group represents mice without administered with streptozotocin. 2 weeks after induction, mice were treated with Resveratrol or Vehicle (DMSO), n = 10 mice for each group, data are represented as the mean ± SEM.) 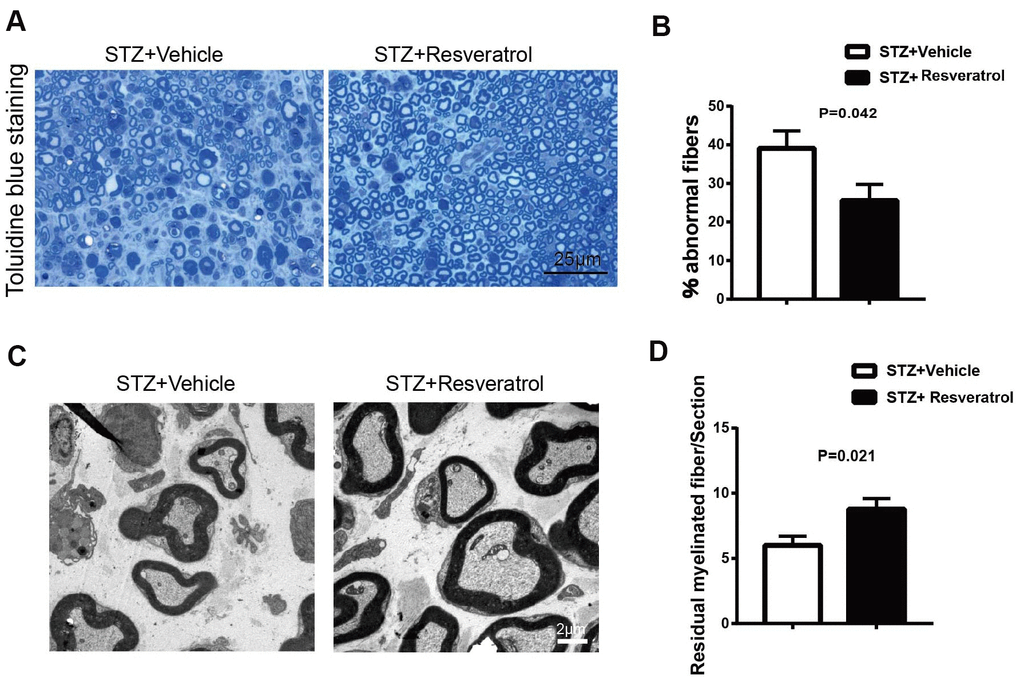 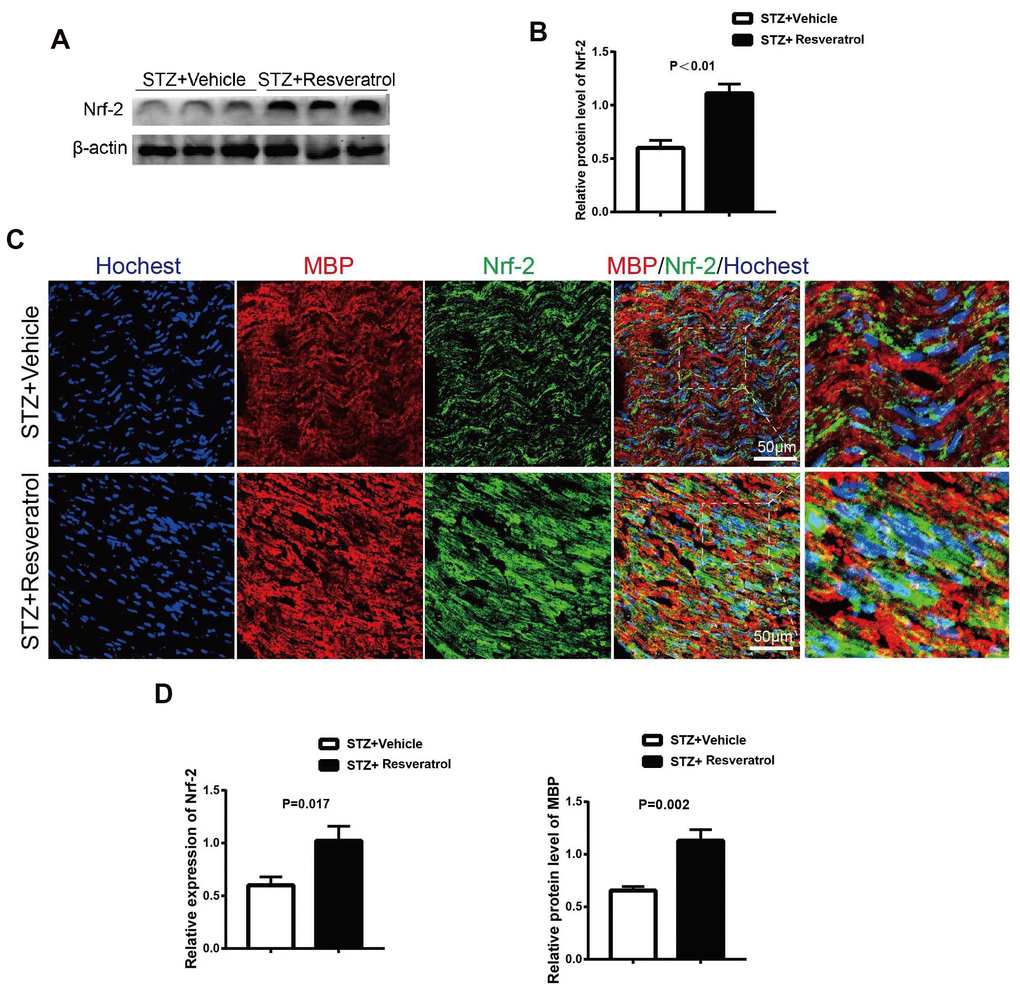 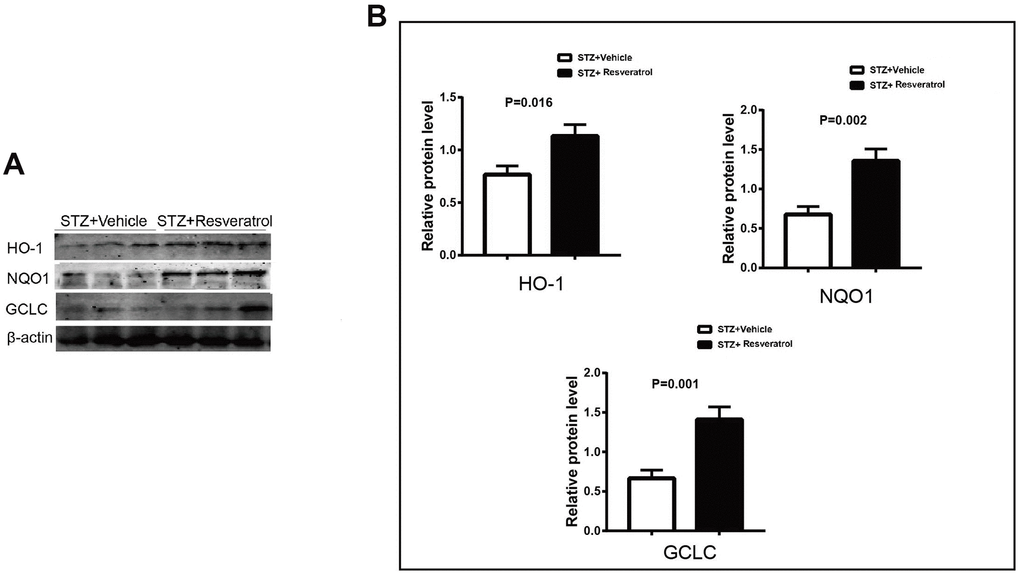 Figure 4. (A, B) Western blot analyses of lysates of HO-1, NQO1, GCLC from STZ+Vehicle and STZ+Resveratrol mice using the indicated antibodies at 12 weeks after STZ injection (n = 3 nerves for each group, data are represented as the mean ± SEM).

Previous studies have shown that LPS induces the expression of genes related to oxidative stress in RAW cells. upregulates Nrf-2 and HO-1 expression, inhibits NF-KB (p65) phosphorylation and affects the secretion of TNF-α and IL-1 β [15, 17]. In our study, the protein expression of Nrf2 and related antioxidant enzymes was increased in resveratrol-treated mice with peripheral neuropathy, and NF-KB and related inflammatory factors were further investigated. It The protein levels of p-p65/p65 were increased (p=0.046), and the levels of MCP-1, TNF-α, and IL-1 β were also found to be upregulated in the peripheral nerves of vehicle-treated mice (Figure 5A, 5B, p<0.01 for MCP-1 p<0.01 for TNF- α and p=0.05 for IL-1β). 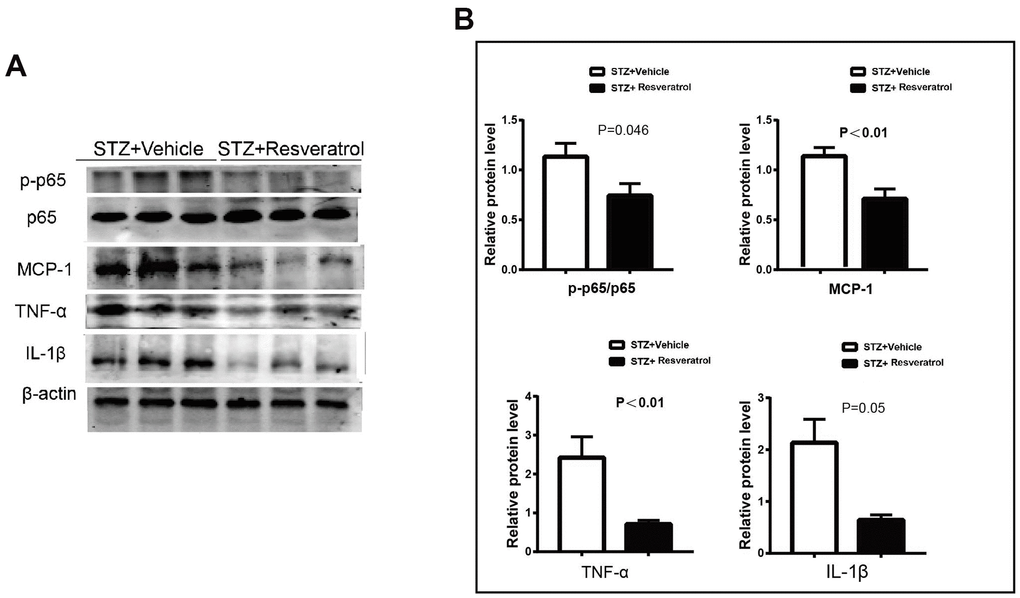 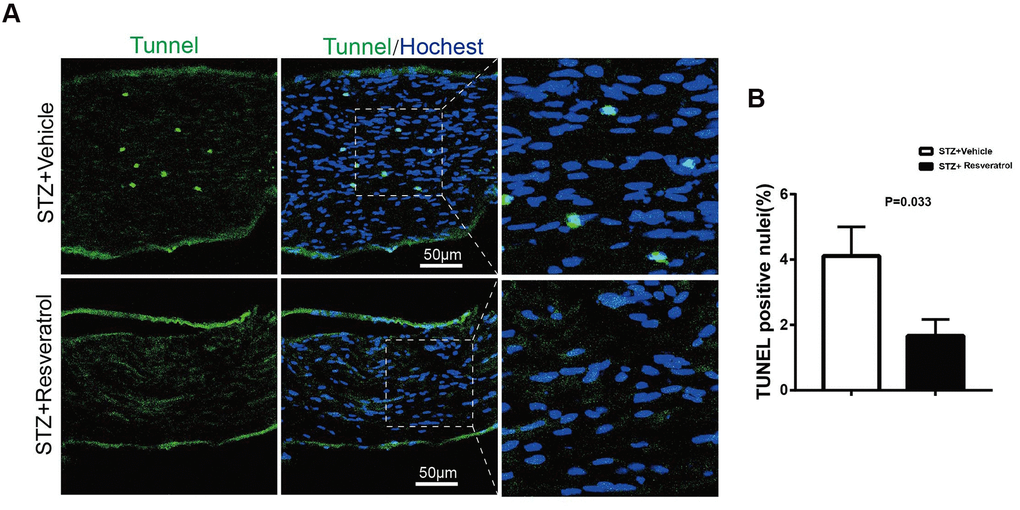 Figure 6. (A, B) TUNEL analysis (green) in longitudinal sections of STZ+Vehicle and STZ+Resveratrol mice stained with the nuclear dye Hoechst (blue) at 12 weeks after STZ injection. (n = 3 animals for each group, data are represented as the mean ± SEM). TUNEL, terminal deoxynucleotidyl transferase dUTP nick end labeling. 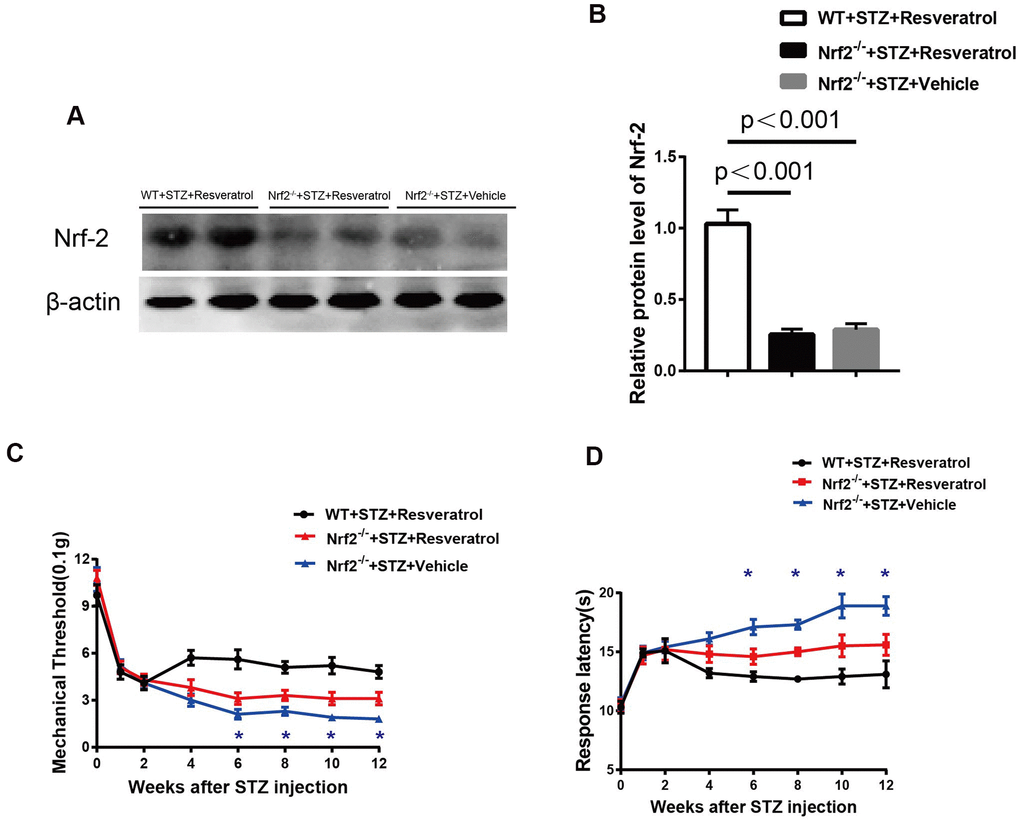 Figure 7. (A, B) Quantification by Western blot analysis showed that Nrf2 decreased in the Nrf2-/-+STZ+Vehicle and Nrf2-/-+STZ+Resveratrol nerve, compared with WT+STZ+Resveratrol mice at 12 weeks after STZ injection (n = 3 nerves for each group, each nerve was repeated 3 times, data are represented as the mean ± SEM). (C, D) Mechanical nociceptive thresholds: ordinates represent the filament weight (0.1g) in which the animal responds in of presentations. Thermal nociceptive threshold: the axis of ordinates represents the time (seconds) the animal takes to withdraw its paw. (2 weeks after STZ induction, mice were treated with Resveratrol or Vehicle (DMSO), n = 10 mice for each group, data are represented as the mean ± SEM).

Figure 8. (A, B) Toluidine blue staining of semi-thin transverse sections of Nrf2-/-+STZ+Resveratrol, Nrf2-/-+STZ+Vehicle and WT+STZ+Resveratrol mice at 12 weeks after STZ injection, The percentage of abnormal fibers was quantitated, and the difference between the three groups was significant (n = 3 mice per group; data are presented as means ± SEM). 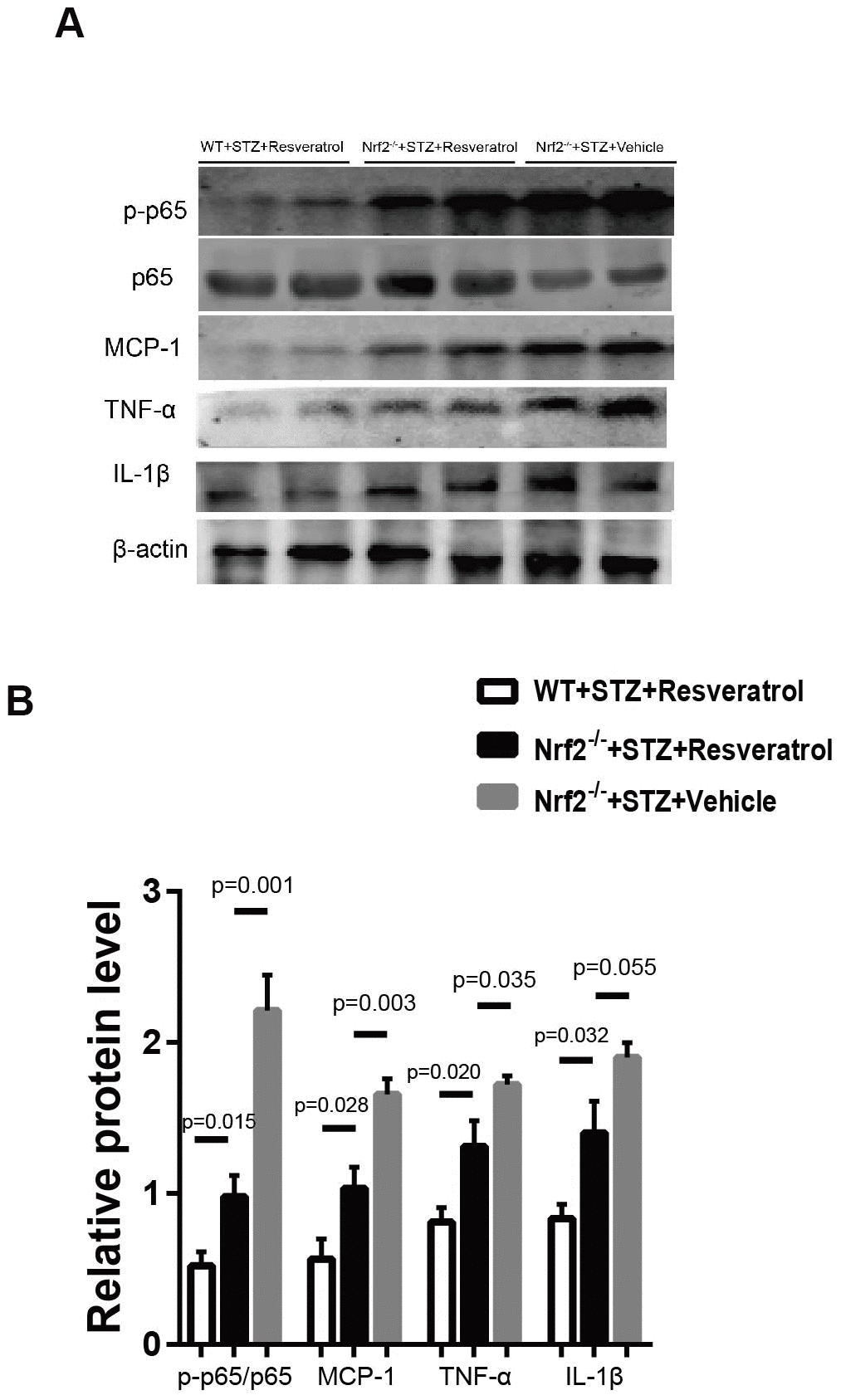 Oxidative stress is the imbalance between oxidative processes and antioxidative defense in the body; persistent hyperglycemia in the body leads to excessive production of reactive oxygen free radicals and active nitrogen free radicals, leading to oxide scavenging disorders and ultimately tissue damage [27]. Oxidative stress can induce insulin resistance, which can cause insulin resistance by activating a variety of redox-sensitive kinases. Excess ROS directly impair the function of islet cells and promote islet B cell apoptosis [23]. When the endogenous antioxidant stress factor Nrf2 is activated, the expression of phase II detoxification enzymes and the level of oxidative stress increase [12, 13]. Our study suggests that resveratrol has a protective effect on diabetic peripheral nerves by activating the Nrf2 pathway and related oxidases. Resveratrol plays an important role in peripheral nerves through Nrf2. Nrf2 knockout mice were further used to confirm the important role of Nrf2 under the action of resveratrol.

The Nrf2 and NF-KB pathways are important pathways that regulate the intracellular redox response and inflammatory balance. The interactions between these pathways involve a series of complex molecular interactions. Nrf2 is a key factor in intracellular oxidative stress. The NF-KB signaling pathway is widely involved in the expression and regulation of related genes, such as cell survival, proliferation and differentiation, and plays an important role in inflammation, cell proliferation, oxidative stress, apoptosis and so on [12, 17, 28]. Nrf2 deletion may lead to the enhancement of NF-KB activity and promote the production of cytokines, while NF-KB can regulate the transcription and activity of Nrf2. When the keap1 gene is knocked out by siRNA in human umbilical vein endothelial cells, the expression of Nrf2-mediated antioxidant genes is upregulated, and TNF-mediated NF-KB activity and the NF-KB signaling pathway are inhibited. Keap1 knockout induces the expression of Nrf2-dependent phase II enzymes and then inhibits TNF-induced ROS accumulation in cells. ROS are important factors necessary for NF-KB activation [29–31].

The results of our study suggest that resveratrol modulates NF-KB by increasing Nrf2 activation and the expression of antioxidant enzymes, which might be responsible for the neuroprotective effect of resveratrol in DPN.

Before model establishment, fasting for 12 h and body weight measurements, some mice were randomly selected for the normal control group. The mice that were not selected for the normal control group were injected once into the left lower abdominal cavity with 120 mg/kg body weight 1% streptozotocin (STZ), and the mice in the normal control group were injected with the same amount of citrate buffer solution. Blood glucose levels in samples taken from the tails of the mice were measured 72 h after STZ injection, and two random blood glucose measurements greater than 300 mg/dl indicated that the model was successfully established.

Von Frey filaments (Stoelting, IL, USA) were used to measure mechanical threshold values. Each mouse was placed on a customized platform. Von Frey filaments were applied to the center area of the plantar surface of the hindpaw in ascending order until an obvious reflex was induced. The filaments were each applied for 2 s, and the interval between applications was 15 s. The paw withdrawal threshold was defined as the force of the filament that caused at least three reactions of the hind paw over five trials.

As previously described [18], thermal withdrawal thresholds were detected using the plantar test (Hargreaves Apparatus, Ugo Basile Biological Instruments, Gemonio, Italy). A light source was placed under a glass floor, and the light source was directed at the center of the hind paw of each mouse. When the mouse retracted its paw, the latency to withdrawal was recorded. Each mouse underwent three stimulations with an interval of at least 15 min. The average threshold of the three tests was recorded as the thermal withdrawal threshold (in seconds).

Nerves were harvested and transferred to tubes. Proteins were extracted using a protein extraction kit (Applygen Technologies Inc., China, P1250). Proteins were separated by SDS-PAGE and then transferred to PVDF membranes. The membranes were incubated with primary antibody for 12 h at 4° C followed by secondary antibodies for 1 h at 37° C and then scanned with an Odyssey Infrared Imaging System (LI-COR, NE, USA).

TUNEL staining was performed using a one-step TUNEL apoptosis assay kit. Longitudinal sections of the nerve were incubated with the reaction mixture for 2 h at 37° C after permeabilization with 0.1% Triton X-100 (Olympus FV1000).

Each experiment was performed using at least three mice. The values are expressed as the means ± standard errors of the means (SEMs), and the data were analyzed using SPSS 24.0 software. Data from different groups were analyzed using Student’s t test, ANOVA, or the Mann-Whitney U-test, as appropriate. Differences were considered significant when P < 0.05.