Copyright: © 2021 Lai et al. This is an open access article distributed under the terms of the Creative Commons Attribution License (CC BY 3.0), which permits unrestricted use, distribution, and reproduction in any medium, provided the original author and source are credited.

Bronchial asthma is characterized by airway hyperresponsiveness (AHR), variable airflow limitation, and airway remodeling [1]. Currently, there is no effective therapy for this disease [1, 2]. Therefore, it is critical to determine the molecular mechanisms of asthma.

Although the airway epithelial cells serve as a first defending barrier of defense against invading pathogens in asthma, recent studies have indicated that macrophages play an important role in fighting against pathogenic invasion [3, 4]. Bang et al. demonstrated that allergic airway inflammation was significantly ameliorated when unsensitized alveolar macrophages (AMs) were adoptively transferred to macrophage-depleted sensitized mice [5]. However, the underlying mechanisms of AMs in regulation of allergic airway inflammatory remain unknown.

Sirtuin 1 (SIRT1) plays an important role in regulating many pathophysiological processes, such as inflammation, autoimmunity, and apoptosis [6]. Our previous study has shown that serum SIRT1 levels in patients with asthma were positively associated serum IgE levels [7]. Ichikawa et al. found that SIRT1 activator suppressed inflammatory cell infiltration and cytokine production in asthmatic mice [8]. Kardan et al. discovered that SIRT1 protein levels were decreased in patients with severe asthma [4]. Although AMs are the first responders to foreign pathogens in the airway and secrete proinflammatory response upon exposure to outside invaders, the possible role of SIRT1 in airway inflammation of macrophages following allergen exposure remains unclear.

Here, using an experimental model of asthma, we sought to determine the underlying mechanisms of SIRT1 in the regulation of allergic airway inflammatory responses in macrophages using an experimental model of asthma. Our findings revealed that ERK/p38 MAPK pathways being the underlying mechanism by which SIRT1 regulates the response of macrophages upon allergen exposure to regulate airway inflammation and mucus production. 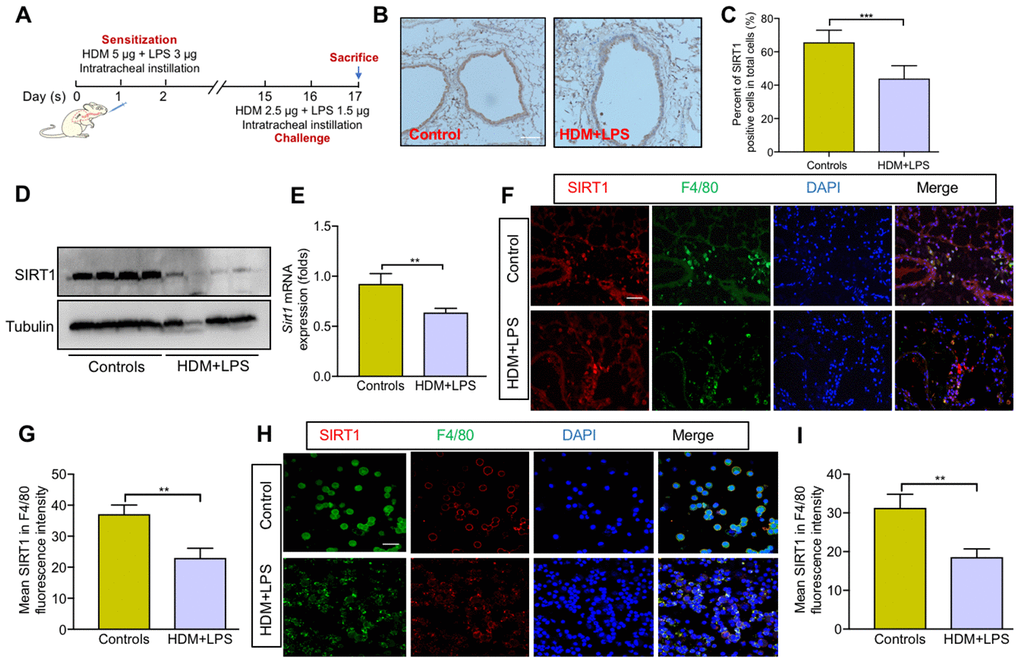 To further explore the role of SIRT1 in lung macrophages, we generated BMDMs from Sirt1fl/fl mice. Consistent with the above findings, the expression of Sirt1 gene was significantly reduced in HDM-induced BMDMs in a dose- and time-dependent manner (Figure 2A, 2B). SIRT1 protein levels in BMDMs were confirmed by using WB and immunofluorescence (IF) analysis (Figure 2C–2E). Taken together, these findings suggested that macrophages are involved in SIRT1-mediated airway allergic inflammation. 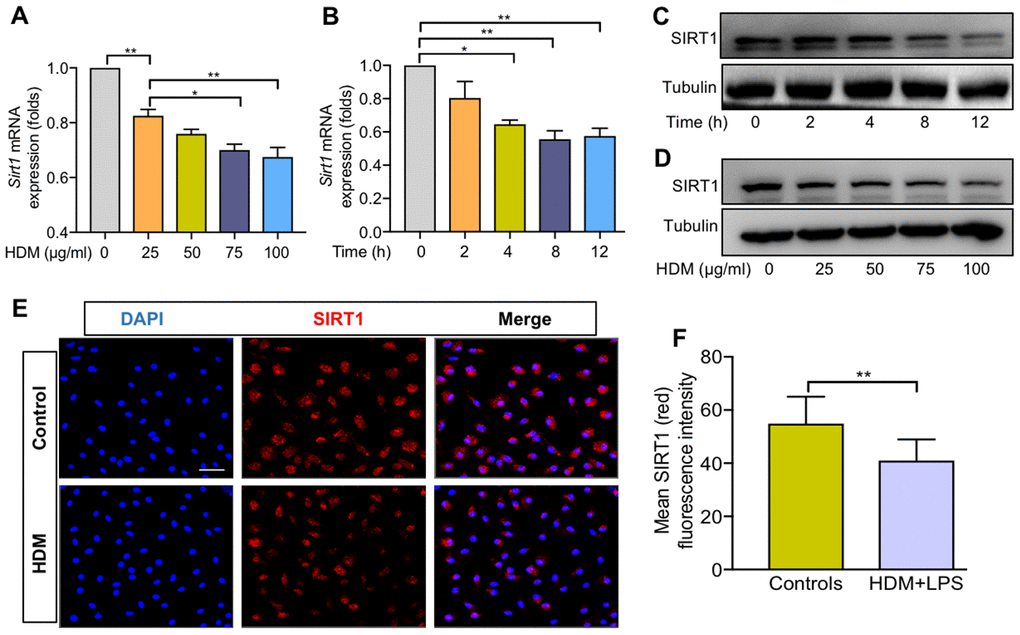 Figure 2. SIRT1 expression was decreased in BMDMs exposed to HDM. Dose–dependent expression of SIRT1 in bone marrow–derived macrophages (BMDMs) stimulated with HDM for 24 h and was analyzed using RT-PCR (A) and WB (C); Time–dependent expression of SIRT1 in BMDMs treated with HDM at 100 μg/ml and was analyzed using RT-PCR (B) and Western blot (D); BMDMs treated with HDM at 100 μg/ml for 24 h. Representative immunofluorescence images of SIRT1 (red) expression in BMDMs (E, Scale bar, 50 μm) and semiquantification of immunofluorescence images was done using Image Pro 6.1 software (F). Data are presented as Mean ± SEM of three independent experiments. *P<0.05, **P<0.01 and ***P<0.001. 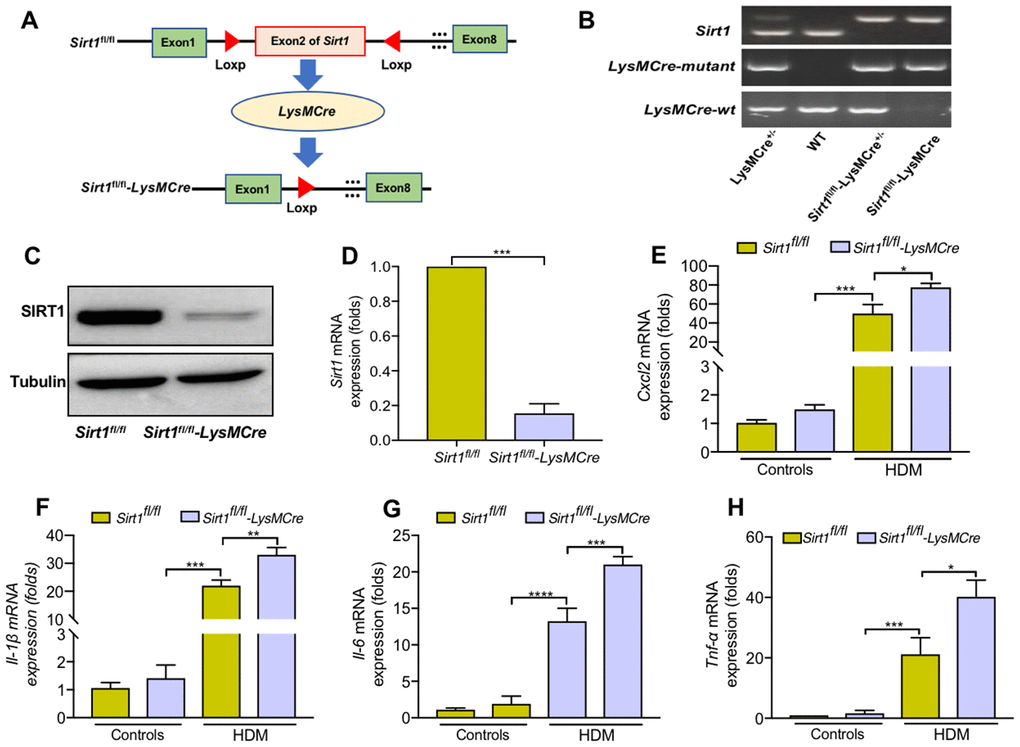 Figure 3. Sirt1-deficient BMDMs enhanced cytokine secretion when treated with HDM. (A) Schematic map of the generation of Sirt1fl/fl-LysMCre mice. (B) Genotyping was performed by PCR using mouse tail genomic DNA. (C, D) Genotyping was assessed in BMDMs from Sirt1fl/fl and Sirt1fl/fl-LysMCre mice using Western blot and RT-PCR analysis. (E–H) BMDMs were treated with HDM at 100 μg/ml for 24 h to measure the levels of Cxcl2, Il-1β, Il-6, and Tnf-α. Data are presented as Mean ± SEM of three independent experiments. *P<0.05, **P<0.01, ***P<0.001 and ****P<0.0001.

We generated BMDMs from Sirt1fl/fl-LysMCre and Sirt1fl/fl mice, and found that Il-6, Tnf-α, Cxcl2, and Il-1β expression were significantly increased in Sirt1-deficient BMDMs compared with the control group (Figure 3E–3H). Collectively, these findings imply that loss of SIRT1 in macrophages enhanced inflammatory cytokine response. 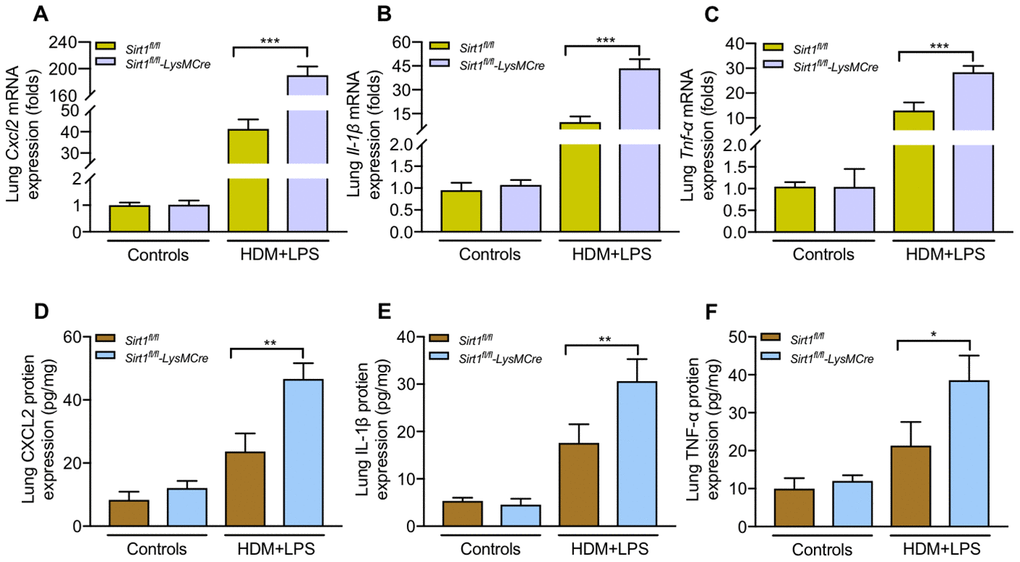 Finally, we assessed the underlying pathways that mediate SIRT1 in regulation of airway inflammatory in macrophages. The mitogen-activated protein kinase (MAPK) pathways is involved in airway inflammation. Therefore, we sought to determine whether MAPK pathways mediate the role of SIRT1 in regulation of inflammatory responses. We found that the phosphorylation of p38 and ERK was increased in HDM-induced BMDMs (Supplementary Figure 2). Moreover, the p-p38 and p-ERK expression in Sirt1fl/fl-LysMCre mice were further aggravated compared with the Sirt1fl/fl mice (Figure 6A, 6B). 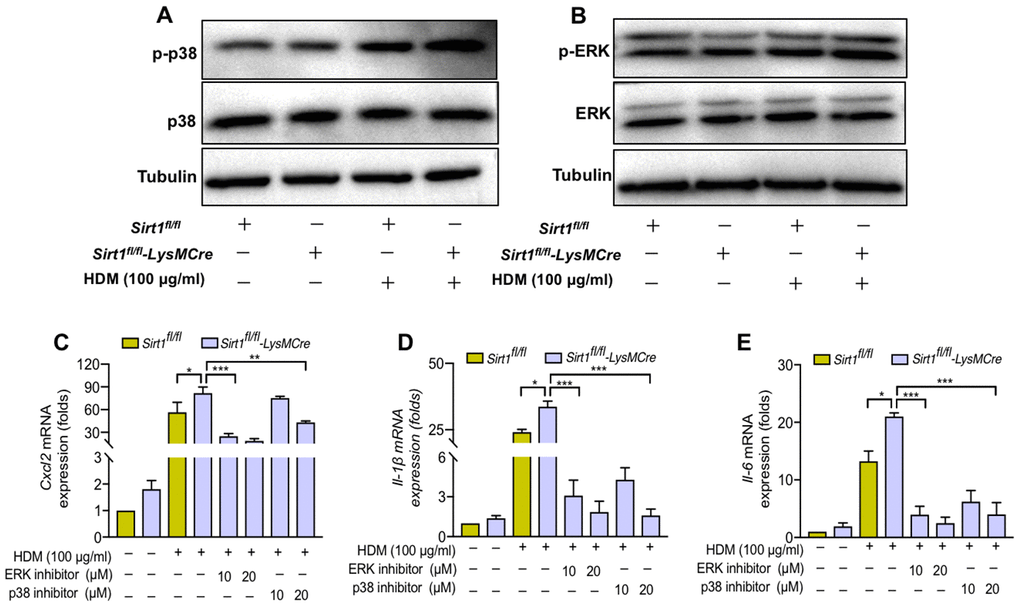 Figure 6. SIRT1 suppresses airway inflammation partially through inhibition of ERK/p38 MAPK pathway activation. (A, B) Sirt1fl/fl and Sirt1fl/fl-LysMCre BMDMs were treated with HDM, the expression of p-p38 and p-ERK was assessed by using Western blot analysis; (C–E) p38 inhibitor SB203580 and ERK inhibitor U0126 were added in HDM-exposed BMDMs and BMDMs were collected after 24 h. The levels of Cxcl2, Il-1β, and Il6 were analyzed by RT-PCR. Data are representative of three independent studies. Results are expressed as mean ± SEM. *P<0.05, **P<0.01 and ***P<0.001.

To further validate the role of ERK/p38 MAPK pathway in SIRT1 mediated- airway inflammation in asthma, we used the p38 inhibitor SB203580 and the ERK inhibitor U0126 to examine whether blocking ERK/p38 MAPK activation could reverse the amplified cytokine production caused by SIRT1 deficiency. We found that the levels of inflammatory cytokines were significantly decreased in SIRT1-deficient BMDMs treated with SB203580 and U0126. (Figure 6C–6E).

Sirtuins regulate diverse biological functions such as stress resistance, metabolism, and aging. SIRT1 plays a critical role in inflammatory diseases by regulating transcription factors, airway inflammation, apoptosis and senescence [9]. However, the roles of SIRT1 in regulating macrophage activation in the pathogenesis of asthma remain unclear [5]. Macrophages from healthy subjects produce lesser IL-10 and co-stimulatory molecules (CD80 and CD86) than asthmatic patients [10]. A study revealed that macrophages from unsensitized mice provided protection against asthmatic symptoms [11]. In contrast, other studies demonstrated that macrophages play a minor role in airway allergic inflammation [12, 13]. The disparity in these studies may be attributed to the different macrophage studied. Our study focused on the function of macrophages in regulation of HDM-induced airway inflammation.

Our study does have some limitations. First, macrophages are polarized towards the M2 phenotype in asthma. Whether SIRT1 mediates the M2-type AM polarization and involves in the pathogenesis of asthma remain to be further elucidated. Second, since SIRT1 is an NAD-dependent deacetylase, SIRT1's deacetylation activity via epigenetics is one of its most important functions. Thus, the epigenetic role of SIRT1 in macrophages of asthma also needs to be further investigated.

The LysMcre mice were a generous gift from Dr. G. Feng (University of California at San Diego, CA, USA). Sirt1fl/fl mice were purchased from GemPharmatech Co., Ltd., and. Myeloid cell-specific SIRT1conditional knockout mice (Sirt1fl/fl-LysMCre) were obtained by crossing Sirt1fl/fl mice with the LysMCre mice. Sequence of primers for LysMCre and Sirt1 genes are listed in Table 1. All experimental procedures were approved by the Guangdong Medical University’s Animal Ethical Committee.

Table 1. Sequence of primers were used in this study.

Allergic asthma mouse model was established according to previous studies [21–23]. Briefly, six- to eight-week-old mice were sensitized by intratracheal instillation of 5 μg HDM (Greer Laboratories) plus 3 μg LPS (Sigma) in 50 μl normal saline (NS) or with 50 μl NS on days 0, 1, and 2. On days 15 and 16 after the initial sensitization, the mice were challenged with 2.5 μg HDM plus 1.5 μg LPS in 50 μl NS or with 50 μl NS using intratracheal instillation. The mice were sacrificed under anesthesia 24 h after the last challenge. Bronchoalveolar lavage fluid (BALF) was conducted according to our previous study [2]. Cytospin slides were performed using the Wright-Giemsa staining method. Hematoxylin/eosin (HE) staining sections and mucus production of goblet cells were assessed using a semiquantitative scoring system as previously described [17]. RT-PCR analysis was preformed according to our previous study [2]. The sequence of primers is listed in Table 1.

The slides were detected with a rabbit polyclonal antibody against SIRT1 (Abcam). Semiquantitative evaluation of SIRT1 positive cells was analyzed with the Image Pro 6.1 software following previously described methods [2].

The expression of TNF-α, CXCL2, and IL-1β in lung homogenate were detected by ELISA kits (eBioscience) following the manufacturer’s recommendation.

The expression of SIRT1 in alveolar macrophages (AMs) and BMDM cells was detected by immunofluorescence as previously described methods [2]. DAPI was used for nucleus staining.

Results are described as mean with SEM. All calculations and the graph were conducted using GraphPad Prism (San Diego, CA, version 8.0). Mann-Whitney U-test or Student's t test was used to compare differences between two groups. For comparisons between more than two groups, one-way ANOVA was applied. A value of P less than 0.05 was considered statistically significant.