Copyright: © 2021 Jin et al. This is an open access article distributed under the terms of the Creative Commons Attribution License (CC BY 3.0), which permits unrestricted use, distribution, and reproduction in any medium, provided the original author and source are credited.

Hepatocellular carcinoma (HCC) serves as a prevailing global malignancy with severe mortality and extremely unsatisfactory prognosis, in which autophagy is a fundamental process in liver cancer pathogenesis, but the mechanisms are poorly understood. MicroRNAs (miRNAs) serve as a type of well-recognized non-coding regulators and contribute to the modulation of liver cancer development, from the aspects of diagnosis, progression, and therapy. Here, we aimed to investigate the function of hsa_microRNA-513b-5p (miR-513b-5p) in regulating autophagy during HCC progression. Specifically, our data showed that miR-513b-5p mimic reduced the LC3-II and beclin1 expression but enhanced p62 expression in HCC cells. MiR-513b-5p repressed liver cancer cell proliferation, migration/invasion, and induced apoptosis in vitro. Crucially, miR-513b-5p attenuated tumor growth of liver cancer cells in vivo. In the mechanical investigation, we identified that PIK3R3 mRNA 3′UTR was targeted by miR-513b-5p and miR-513b-5p suppressed PIK3R3 expression. PIK3R3 overexpression partly reversed miR-513b-5p-mediated autophagy, proliferation, and apoptosis of liver cancer cells. Consequently, we concluded that miR-513b-5p repressed autophagy during the malignant progression of HCC by targeting PIK3R3. MiR-513b-5p may be applied as a therapeutic target for HCC.

Liver cancer is a prevalent malignancy and the principal reason for tumor mortality globally, in which hepatocellular carcinoma (HCC) depicts 70–85% of the entire liver carcinoma weight [1]. Although there have been recent improvements, most HCC cases are identified at an advanced stage, resulting in bad outcomes and a considerable recurrence frequency [2]. Though previous investigations have explored the unusual expression of various proteins in HCC, the mechanism of HCC development is still mostly undiscovered [3]. Autophagy is a lysosome-related program and represents an intricate function during tumorigenesis [4]. When denied growth factors, nutrients, and oxygen, cancer cells sustain their durability by autophagy-associated degeneration of damaged organelles and misfolded proteins [5]. As the previous studies, autophagy is a crucial process during liver cancer development and a potential therapeutic target for liver cancer therapy (Allaire, 2019 #35; Huang, 2018 #34; Tang, 2019 #33), but the mechanisms are poorly understood.

MicroRNAs (miRNAs) are extensively expressed in many species, including viruses, plants, and animals [6, 7]. MiRNAs serve the non-coding, endogenous, and small regulators and negatively modulate the targeted genes' mRNA 3′-untranslated region (3′-UTR) by causing mRNAs degeneration suppressing protein translation [8–10]. Multiple miRNAs are reported to participate in the regulation of liver cancer [11, 12]. Meanwhile, miR-513b-5p has been reported to inhibit progression of embryonal carcinoma and lung cancer [13, 14]. Moreover, it has been uncovered that miR-511 reduces migration, invasion, and proliferation of HCC cells by targeting phosphoinositide-3-kinase regulatory subunit 3 [15]. MiR-132 represses migration, invasion, and proliferation of HCC cells through down-regulating PIK3R3 [16]. PIK3R3 acts as an oncogene of various cancers, containing glioma, lung cancer, and gastric cancer [17–19]. However, the impact of miR-513b-5p on PIK3R3 in HCC is still unreported. As several miRNAs are involved in the modulation of autophagy in HCC and based on the crucial role of miR-513b-5p in cancer development, we selected miR-513b-5p as an example to evaluate its function in autophagy during liver cancer progression. 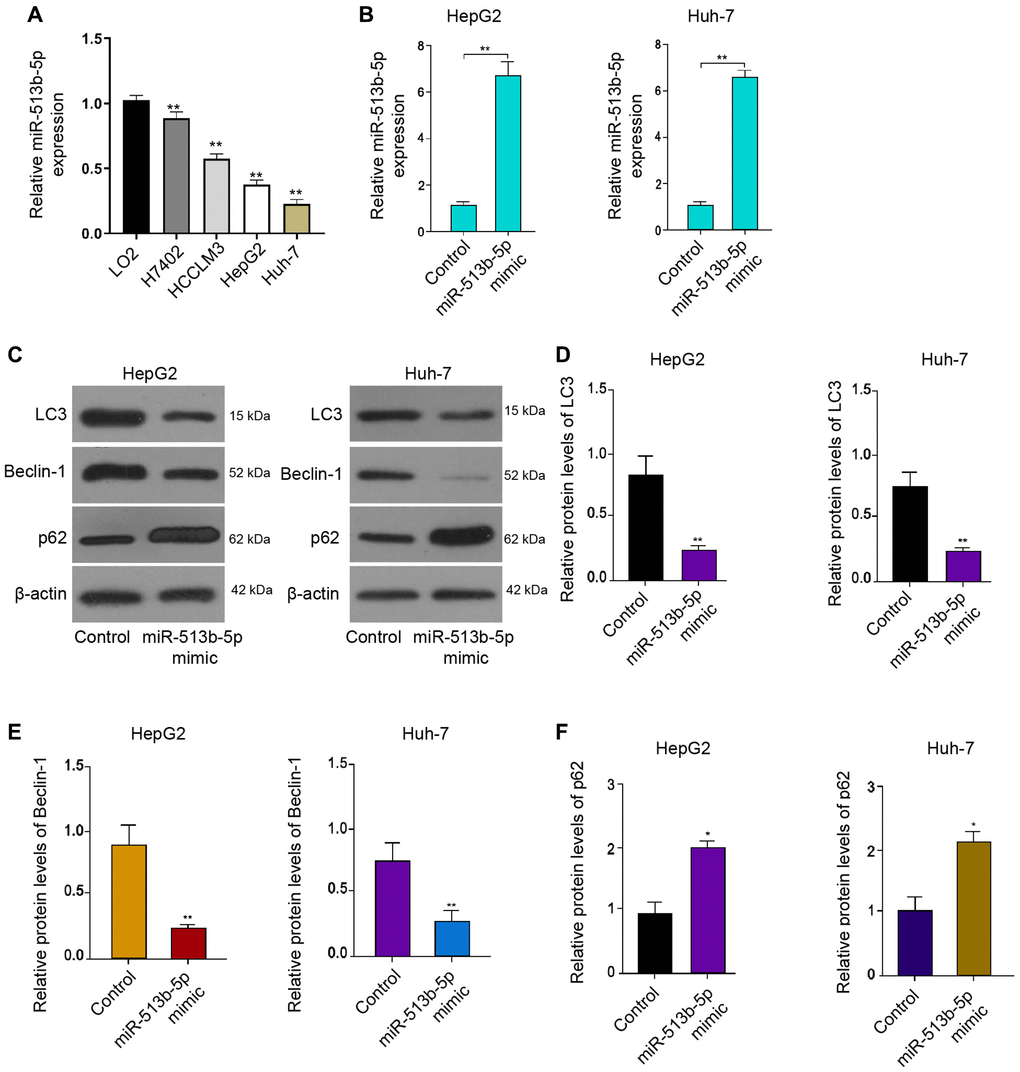 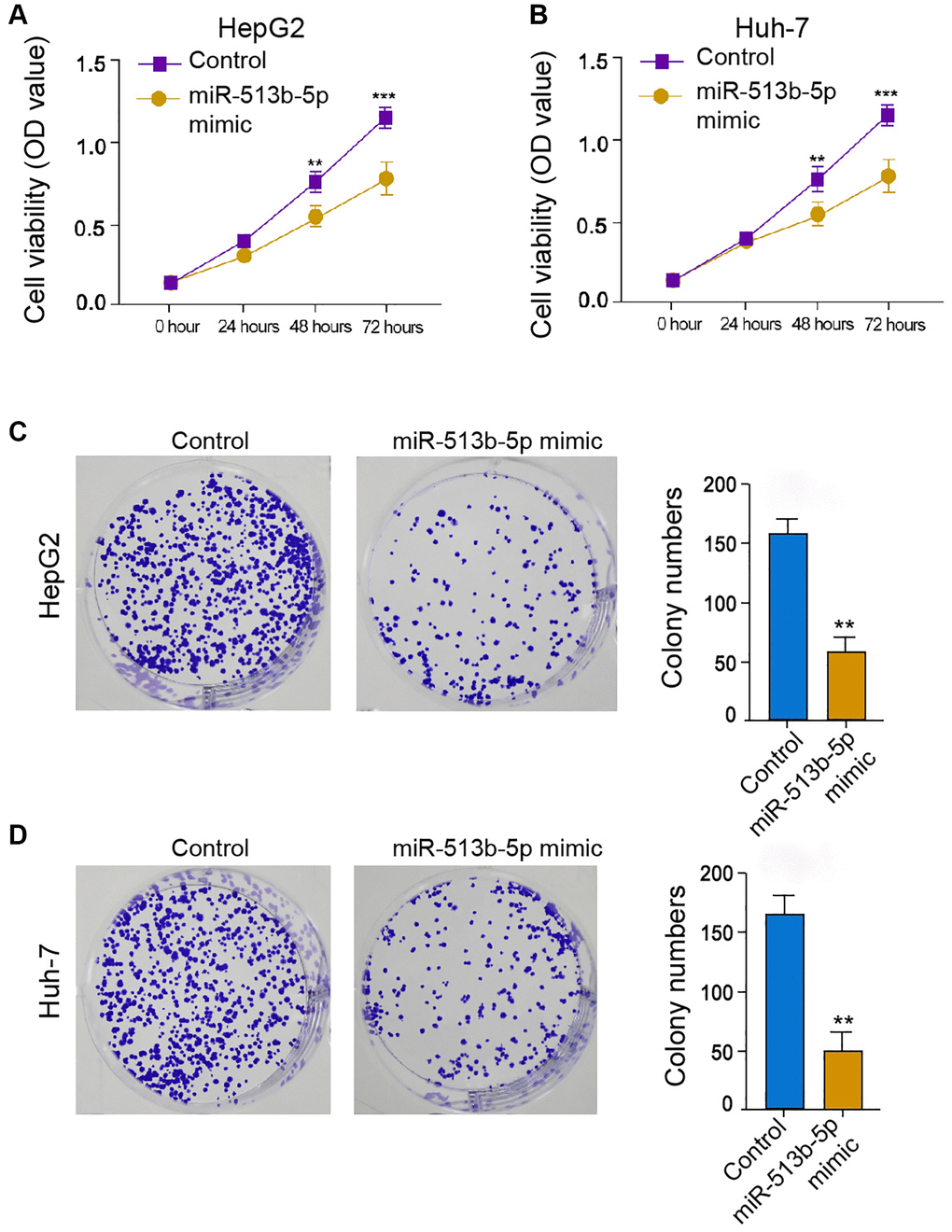 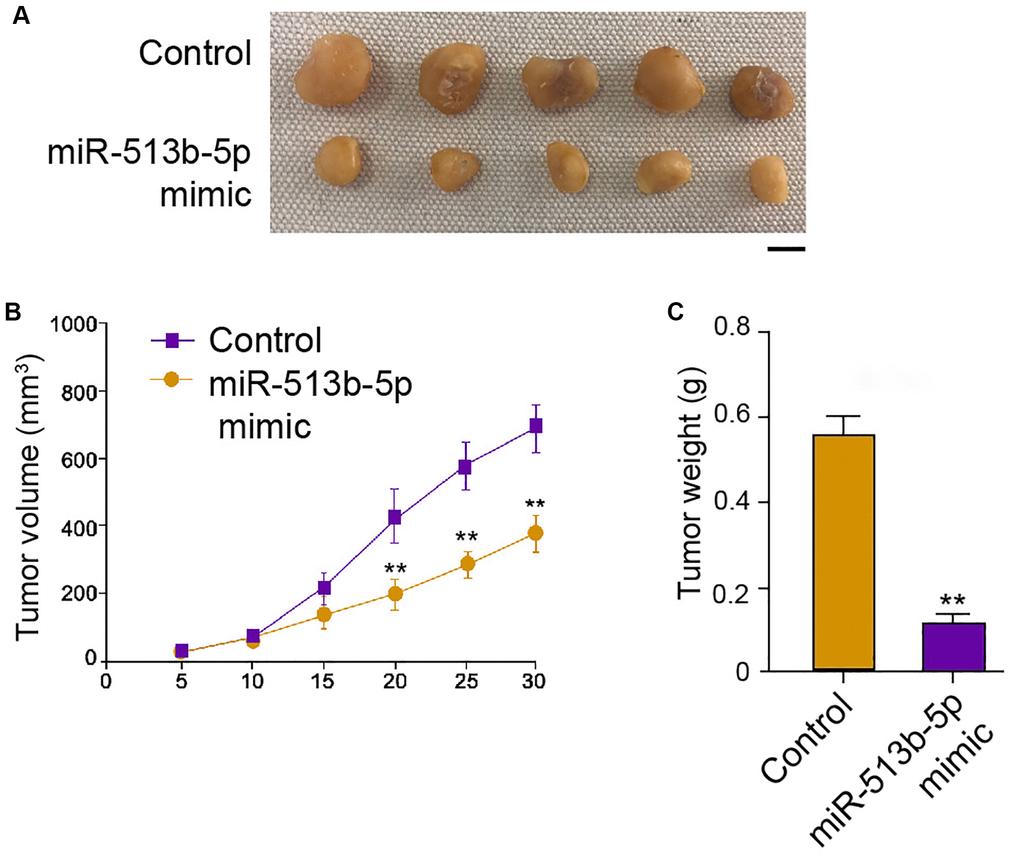 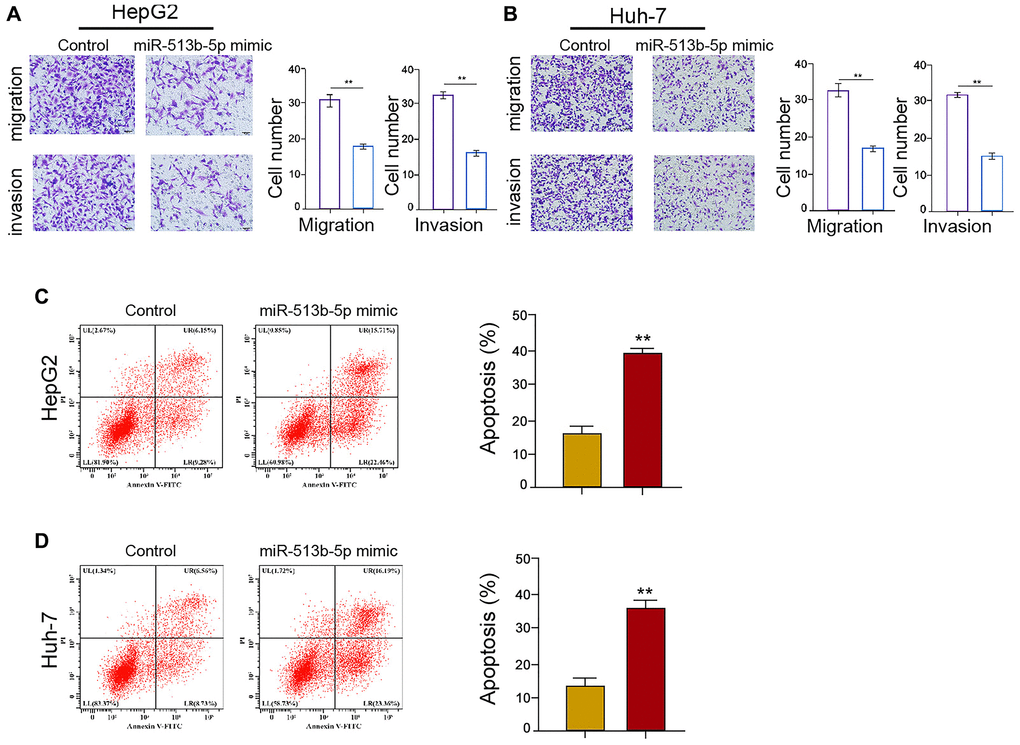 PIK3R3 is targeted by miR-513b-5p in liver cancer cells

Next, we tried to explore the potential mechanism underlying miR-513b-5p-mediated HCC progression. The predicted analysis demonstrated the potential binding of miR-513b-5p with PIK3R3 mRNA 3′UTR (Figure 5A). MiR-513b-5p mimic remarkably repressed the luciferase activities of PIK3R3 mRNA 3′UTR in the HepG2, Huh-7, and HCCLM3 cells (Figure 5B and 5C, Supplementary Figure 4). Both of the mRNA and protein levels of PIK3R3 were down-regulated by miR-513b-5p mimic in the HepG2, Huh-7, and HCCLM3 cells (Figure 5D–5F, Supplementary Figure 3B). Collectively, it indicates that PIK3R3 is targeted by miR-513b-5p in liver cancer cells. 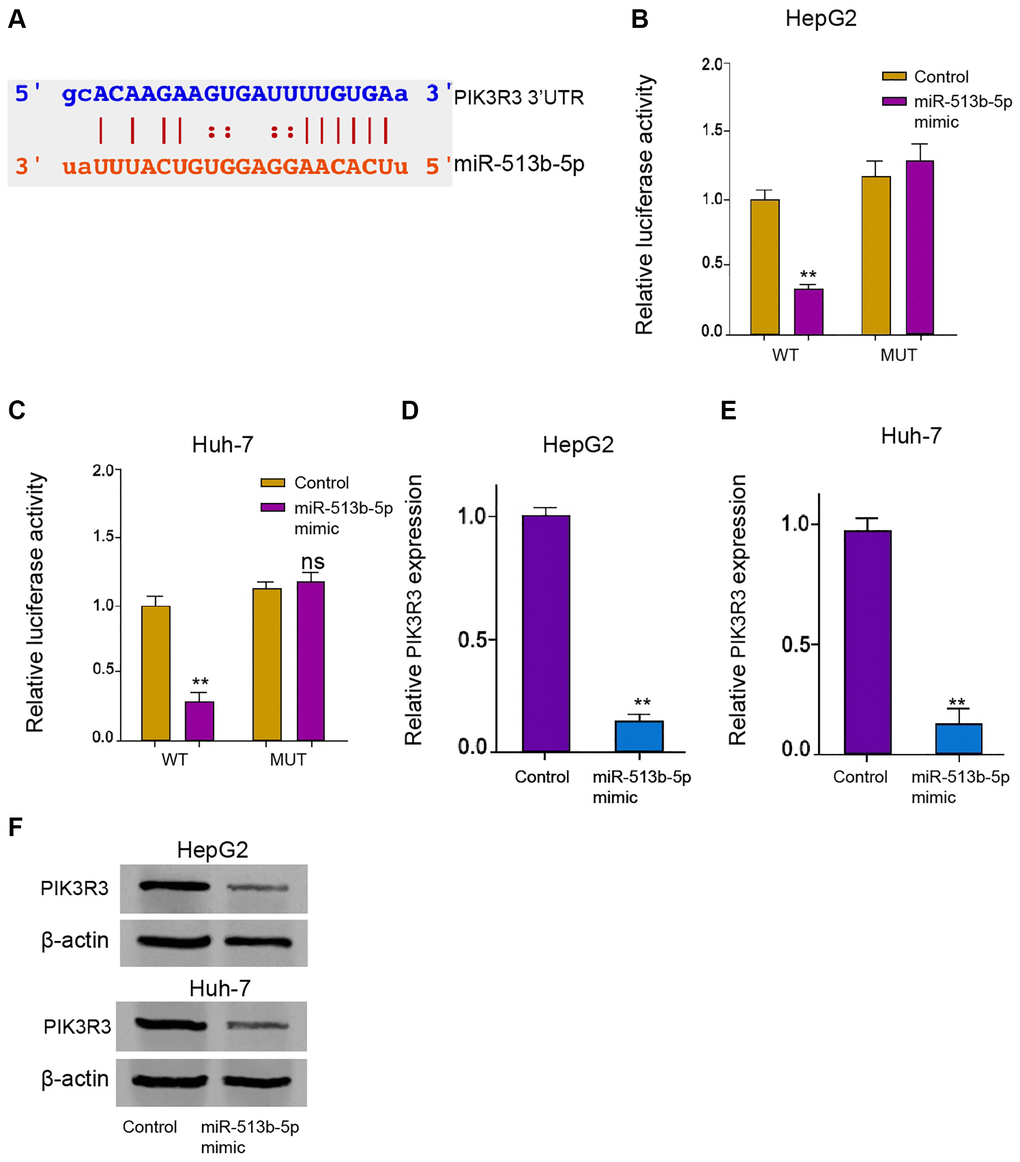 Furthermore, the treatment of miR-513b-5p mimic repressed the LC3-II expression but induced p62 expression in the HepG2 and Huh-7 cells, in which the PIK3R3 overexpression partly reversed this effect in the cells (Figure 6A and 6B). Meanwhile, PIK3R3 overexpression partly rescued the cell proliferation and blocked the cell apoptosis, which were mediated by miR-513b-5p mimic in the HepG2, Huh-7, and HCCLM3 cells (Figure 6C–6F, Supplementary Figure 5), implying that PIK3R3 is involved in miR-513b-5p-inhibited autophagy liver cancer cells. 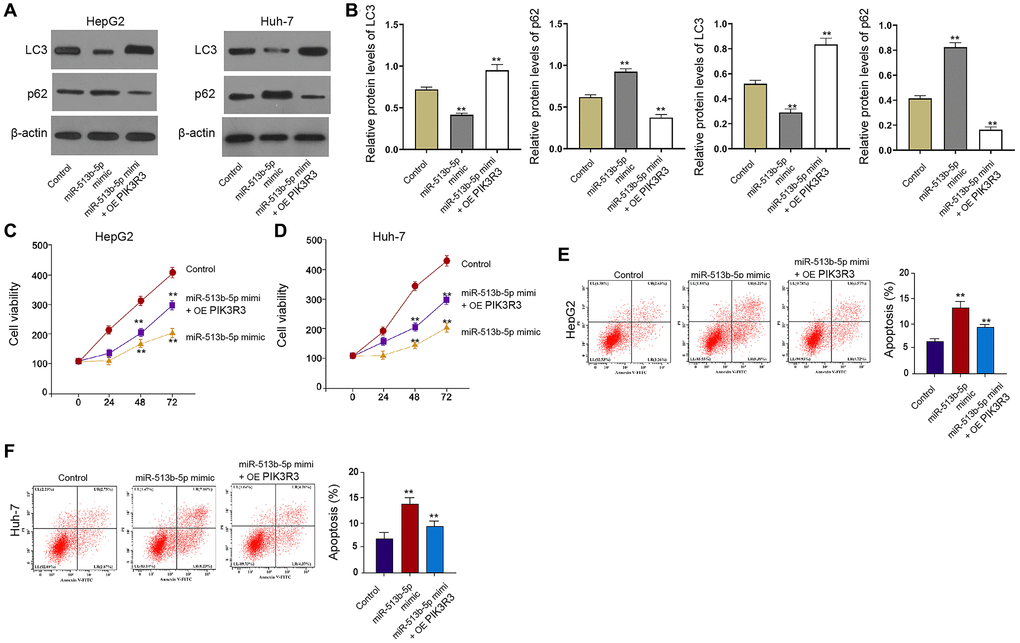 Figure 6. PIK3R3 is involved in miR-513b-5p-inhibited autophagy liver cancer cells. (A–F) The HepG2 and Huh-7 cells were treated with miR-513b-5p mimic and pcDNA3.1- PIK3R3. (A and B) The detection of LC3, beclin1, and p62 expression using Western blot analysis. (C and D) The analysis of cell proliferation using MTT assays. (E and F) The analysis of cell apoptosis using flow cytometry. 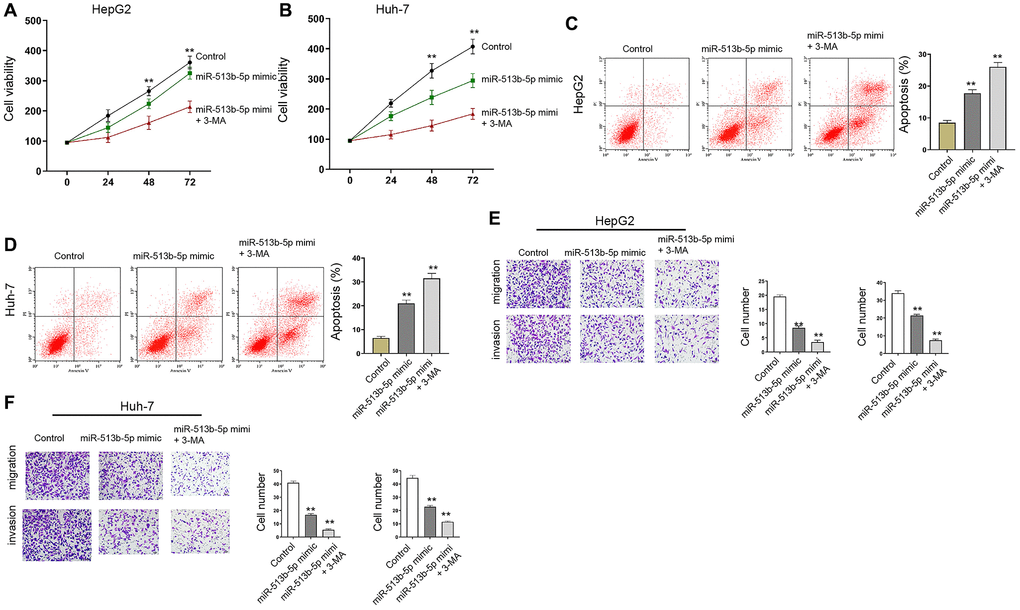 We concluded that miR-513b-5p repressed autophagy during the malignant progression of HCC by targeting PIK3R3. MiR-513b-5p may be applied as a therapeutic target for HCC.

The RNA was extracted from BC cells by using TriZol reagent (Thermo) after treatment, reverse transcribed to cDNA by using Super Script III kit (Invitrogen). Subsequently, the relative level was quantified by SYBR Premix kit (Takara, Japan), and normalized to GAPDH and 18 s. The results were calculated with 2-△△Ct method. All primers were obtained from RiboBio (China).

The cell viability was measured by MTT assays in the HepG2 and Huh-7 cells. Briefly, after the indicated treatment, about 2 × 104 cells were put into 96 wells and cultured for 12 hours. After indicated treatment, the cells were added with the MTT solution (10 μL, 5 mg/mL) and cultured for an extra 4 hours. Discarded medium, and 150 μL DMSO was used to treat the wells. An ELISA browser was applied to analyze the absorbance at 570nm (Bio-Tek EL 800, USA).

Total proteins were obtained from the mice tissues or cells with RIPA buffer (CST, USA). Protein concentrations were analyzed by applying the BCA Protein Quantification Kit (Abbkine, USA). Same concentration of protein was divided by SDS-PAGE (12% polyacrylamide gels), transferred to PVDF membranes (Millipore, USA) in the subsequent step. The membranes were hindered with 5% milk and hatched overnight at 4°C with the primary antibodies for PIK3R3 (Abcam, USA), LC3 (Abcam, USA), beclin1 (Abcam, USA), p62 (Abcam, USA), and β-actin (Abcam, USA). Then, the corresponding second antibodies (Abcam, USA) were used for hatching the membranes 1 hour at room temperature, followed by the visualization by using an Odyssey CLx Infrared Imaging System.

The HCC cells were transfected as the indication, digested and suspended as single cells, seeded into 6-well plates with 1000 cells in each well. The cells were placed in incubator for two weeks, and the medium was changed every three days till the visible clones formed. The formed clones were stained by 0.5% crystal violate resolved in methanol, captured and counted by a microscope (Leica, Germany).

The tumor growth of liver cancer cells in vivo was analyzed in nude mice of Balb/c (male, 4-week-old) (n = 5). About 1 × 107 cells HepG2 cells treated with miR-513b-5p mimic A. After 5 days of injection, we measured tumor growth every 5 days. We sacrificed the mice after 30 days of injection, and tumors were scaled. The width and length of tumor, and the body weight of mice were measured at indicated time. Tumor volume was calculated by the formula: width (mm)2 × length (mm)/2. The mice were anesthetized to death when tumor size reached 1000 mm3, and the tumors were collected. Animal care and method procedures were authorized by the Animal Ethics Committee of Affiliated Wuming Hospital, Guangxi Medical University.

The migration and invasion ability of HCC cells were determined via using a transwell chamber (Corning, USA). To detect migration, HCC cells (1 × 105 cells/well) transfected as the indication were seeded into the upper chambers with FBS-free medium, while the lower chambers were filled with complete DMEM medium. After 24 hours incubation, the membranes of upper chambers were fixed by 4% paraformaldehyde for 15 min, and stained by 0.5% crystal violet for 30 minutes. The migrated cells were photographed and counted. For cell invasion, the process was similar with that of migration experiment, only that the upper chambers were coated with Matrigel (BD Bioscience, USA).

For cell apoptosis detection, the apoptotic cells were stained with an FITC-Annexin V/PI detection kit (CST, USA). In brief, about 2 × 105 HepG2 and Huh-7 cells were plated on 6-well dishes. And the cells were harvested, washed with PBS, then stained with FITC-Annexin V (5 μL) and PI (5 μL) for 10 minutes, respectively. The samples were then detected in a flow cytometry (BD Biosciences, USA).

The potential binding sites of miR-513b-5p and the 3′UTR region of PIK3R3 were predicted by ENCORI website. The wild type sequences of the 3′UTR region of PIK3R3 were cloned into the pmirGLO vectors (Promega, USA) to obtain the PIK3R3-WT. The site-specific mutated sequences of the 3′UTR of PIK3R3 were inserted into pmirGLO vectors to obtain the PIK3R3-Mut. The cells were transfected with PIK3R3-WT and Mut along with miR-513b-5p mimic. After 24 hours incubation, the cells were lysed and the luciferase intensity was detected by a Dual Luciferase assay kit (Promega, USA). As control, the luciferase activities of Renilla were measured.

This research did not receive any specific grant from funding agencies in the public, commercial, or not-for-profit sectors.