Copyright: © 2021 Miao et al. This is an open access article distributed under the terms of the Creative Commons Attribution License (CC BY 3.0), which permits unrestricted use, distribution, and reproduction in any medium, provided the original author and source are credited.

Chronic thromboembolic pulmonary hypertension (CTEPH) is a rare and debilitating disorder characterized by pulmonary artery obstruction with unresolved, organized thromboemboli [1, 2]. Due to delayed symptoms or misdiagnosis, CTEPH is typically diagnosed at an advanced stage, and as a result, disease prognosis is poor, with a < 40% 5-year survival rate [3, 4]. The only curative treatment currently available is pulmonary endarterectomy (PEA) for improving quality of life and prolonging survival [5–7]. However, not all patients are eligible for surgery, and alternative treatments are still required. Moreover, the exact pathophysiology of CTEPH remains largely unknown. To improve clinical outcomes, improved understanding of the detailed mechanisms involved in CTEPH is crucial.

The occurrence and development of CTEPH are complex processes involving various genes, multiple cell types, and a large number of signal transduction systems [8]. In particular, the roles of multiple cell types in disease development are gaining increasing attention. It has been reported that accumulation of circulating inflammatory cells [9] and excessive proliferation and migration of smooth muscle and endothelial cells [10–12] are involved in pulmonary arterial remodeling during CTEPH. Moreover, crosstalk between endothelial-like and myofibroblast-like cells has been shown to play a key role in endothelial cell dysfunction, contributing to vascular lesion in CTEPH [13]. Despite these findings, the cell types contributing to CTEPH progression have not been fully elucidated. A clear and complete atlas of the cellular repertoire that participates in the occurrence and development of CTEPH is vital for the development of effective diagnostic and therapeutic strategies to prevent CTEPH and decrease mortality.

To construct an atlas of the cell repertoire in CTEPH, we generated scRNA-seq profiles of pulmonary endarterectomized tissues from five CTEPH patients undergoing PEA. Tissue samples were digested into single-cell suspensions and analyzed by droplet-based single-cell transcriptome profiling using the 10× Genomics Single Cell Gene Expression Chromium system (https://www.10xgenomics.com/products/single-cell-gene-expression) (Figure 1). DNA sequencing reads were mapped to the hg19 human reference genome. We generated five-feature barcode matrices for each of the five samples independently, and these matrices were then aggregated. Subsequently, we filtered and collected 27,140 cells. By visualizing histograms representing gene number and unique molecular identifier (UMI) count, individual cells and their gene expression in the sample could be evaluated. For species for which mitochondrial genome information is available, the percentage of mitochondrial genes in cells was calculated to filter cells with relatively high mitochondrial gene content. Gene numbers, UMI counts, and percentage of mitochondrial genes are represented using violin plots (Supplementary Figure 1).

Figure 1. Schematic of the experimental design for single-cell RNA sequencing.

After quality filtering and normalization of gene expression, dimension reduction involving the top 20 components was conducted. As a result, a total of 17 cell clusters (clusters 0–16) was characterized (Figure 2A), corresponding to 10,518 marker genes. We then determined marker genes that were uniquely expressed in each cell cluster in comparison with all other clusters. The key marker genes for each cell cluster are presented in Figure 2B. Based on cell markers, fibroblast/smooth muscle cells were composed of clusters 3, 5, 6, 7, 9, and 15, and accounted for the largest proportion (37%) of total cells. Clusters 2 and 4 were classified as T-/NK cells, with a relative percentage of 18%. Clusters 1, 8, 10, 12, and 13 were classified as macrophages (11%), CRISPLD2+ cells (6%), cancer stem cells (4%), mast cells (2%), and endothelial cells (2%), respectively. Clusters 0, 11, 14, 16 were categorized as ‘undefined’ (20%) (Figure 2C, 2D). 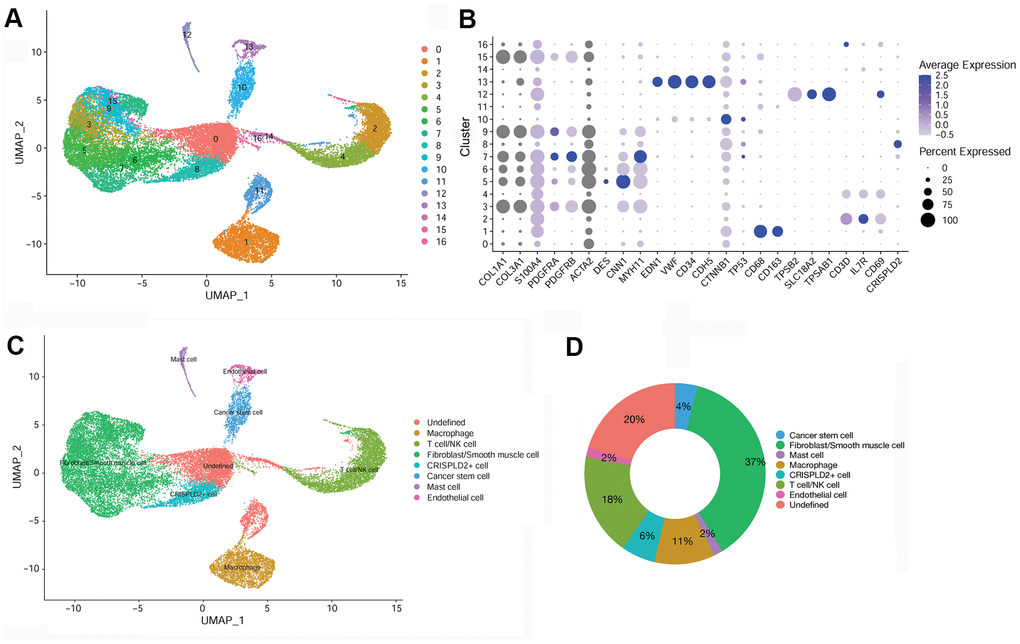 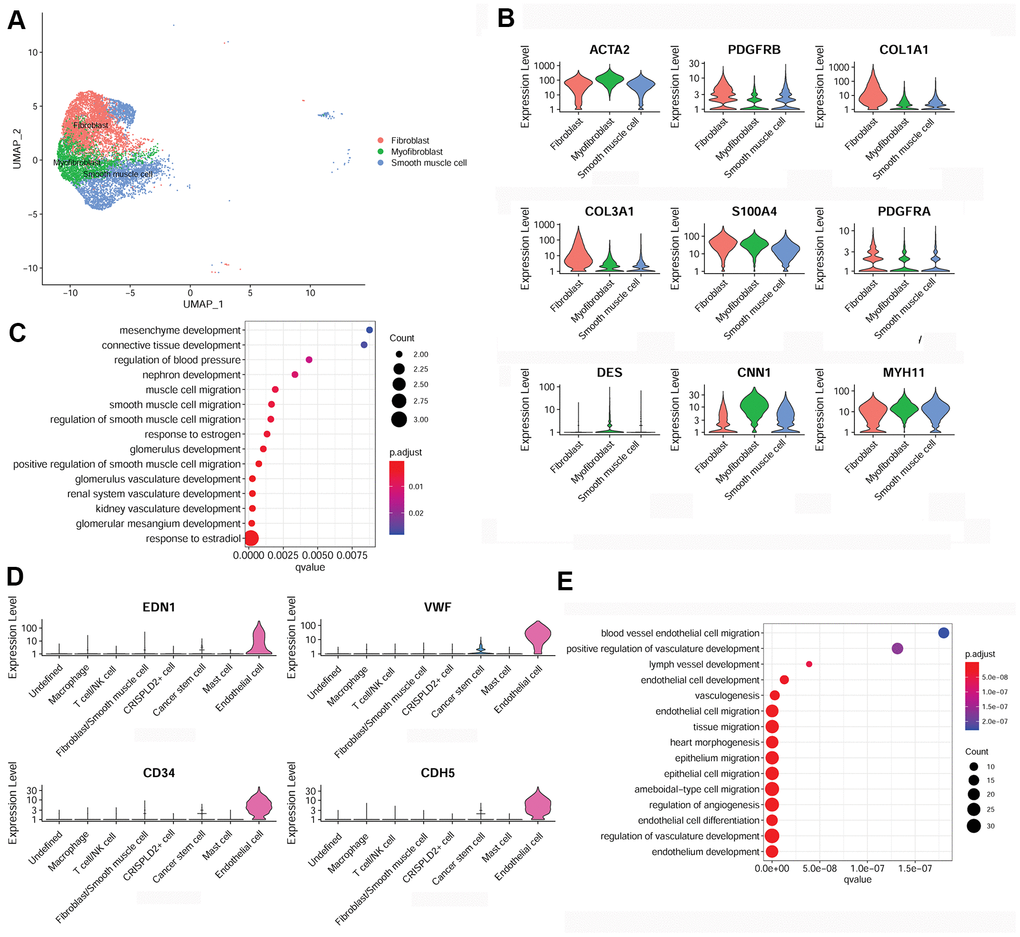 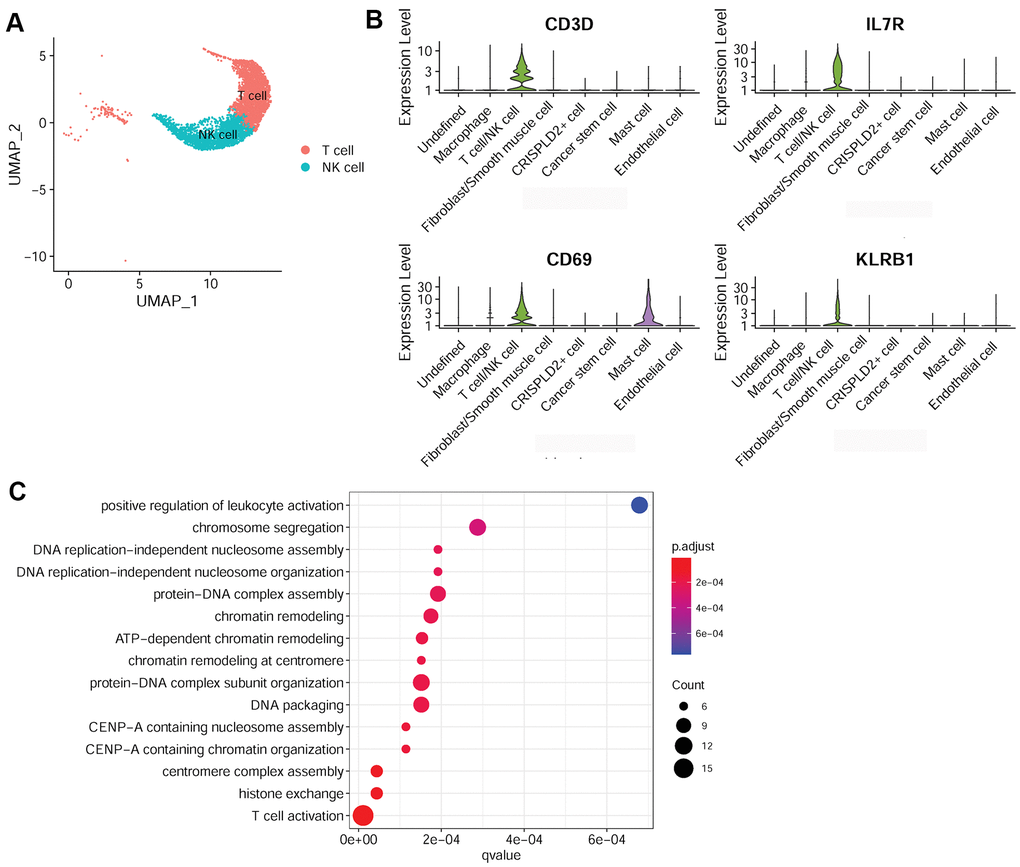 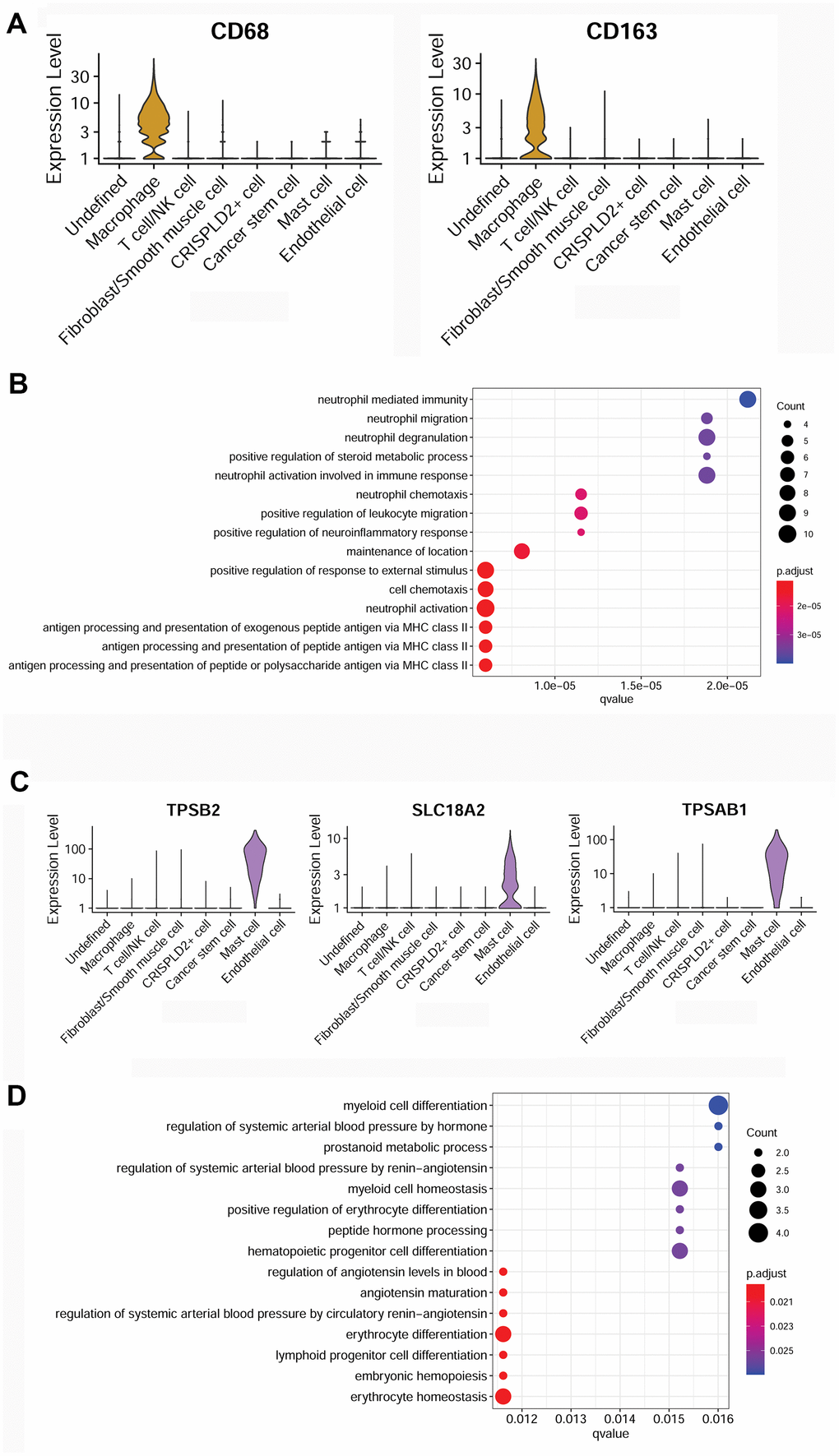 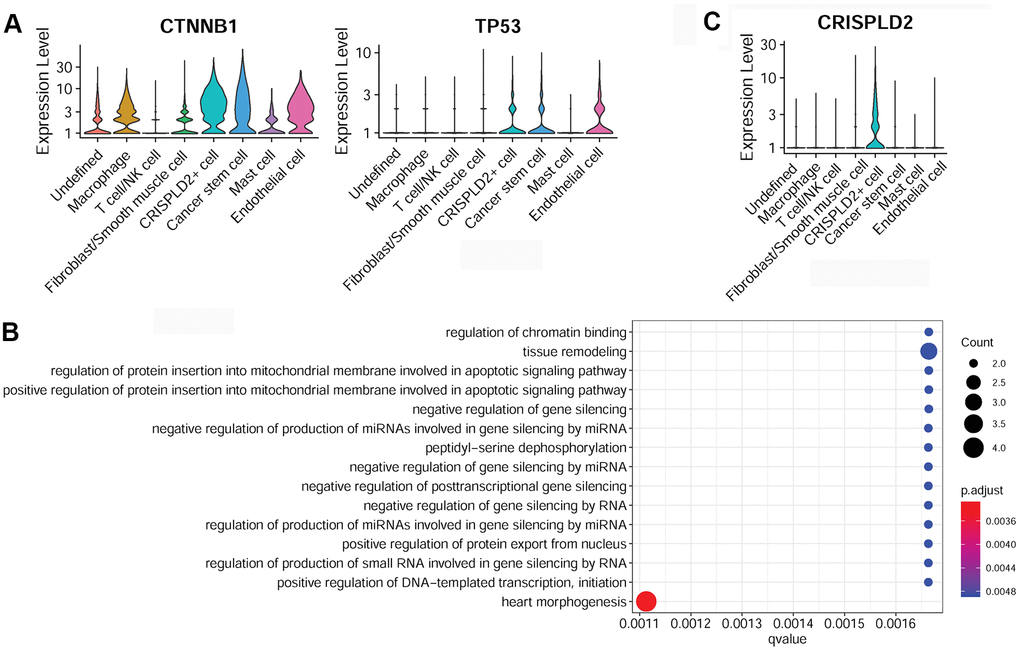 CTEPH is a potentially curable disease, but its pathophysiology is not fully understood. There is limited research about the cells that make up the endarterectomized tissues. The present study, for the first time, investigated the cell landscape of pulmonary endarterectomized tissues of CTEPH patients using scRNA-seq. We found 17 cell clusters that could be divided into eight cell populations based on marker genes, as follows: including fibroblast/smooth muscle cell, T cell/NK cell, macrophage, CRISPLD2+ cell, cancer stem cell, mast cell, endothelial cell, and undefined. The functions of these cell populations with respect to CTEPH and their marker genes merit further discussion.

Accumulating evidence has revealed the crucial role of dysregulated immune responses in CTEPH development [28], and such immune responses relate to either innate or adaptive immunity. Macrophages, NK cells, and mast cells participate in innate immunity, while T and B cells are implicated in adaptive immunity [28]. In CTEPH patients, macrophages and activated T and B lymphocytes are involved in thrombotic and atherosclerotic lesions [29]. Macrophages are first-line myeloid leucocytes in pulmonary lesions in patients with pulmonary hypertension [30]. Mast cells are tissue-resident immune cells that have key functions in the immune system through the production of inflammatory cytokines. Macrophages and mast cells play a pathological role in CTEPH via production of inflammatory cytokines, recruitment of other immune cells, and local inflammation and damage [28]. Moreover, CD68 and CD163 are two macrophage-associated markers, whose expression levels are associated with adverse outcomes in human atherosclerosis [31]. CD68- and CD163-positive tumor-associated macrophages are reported as key factors in tumor growth and metastasis through releasing chemokines such as inflammatory growth factors [32]. Our results showed that specific macrophage marker genes (such as CD68 and CD163) are significantly involved in key functions related to neutrophil activation, cellular chemotaxis, and antigen processing and presentation via MHC Class II molecules. Neutrophils are early responders and are recruited to respond to chemokines produced by tissue-resident immune cells such as macrophages and mast cells. In addition, it has been reported that CD3+ T cells accumulate in atherosclerotic and thrombotic lesions of CTEPH patients [29]. CD69 has been shown to be involved in immune cell homeostasis, which can activate T cell-mediated immune responses via regulating Th17 cell differentiation [33]. CD69 has also been identified as being inhibitory to cardiac inflammation and heart failure progression in autoimmune myocarditis [34]. Our analysis showed that specific T-/NK cell marker genes (such as CD3D and CD69) were remarkably enriched for T cell activation. It can be speculated that during CTEPH, the accumulation of macrophages and mast cells promotes the production of inflammatory cytokines and chemokines and subsequently induces T cell activation.

Notably, CRISPLD2, which encodes a secreted protein, has been shown to increase the anti-inflammatory effects of glucocorticoids to mediate immune responses in airway smooth muscle cells [35]. CRISPLD2 also functions as an endogenous anti-inflammatory gene in lung fibroblasts, and is an inhibitor of pro-inflammatory signaling in lung epithelial cells [36]. Based on our results, we speculated that CRISPLD2+ cells may be involved in CTEPH via the regulation of anti-inflammatory processes and subsequent immune responses. In addition to these, cancer stem cell clusters were also identified as a relatively newly recognized population in pulmonary endarterectomized tissues in CTEPH patients. Specific cancer stem cell marker genes are CTNNB1 and TP53. CTNNB1 expression is elevated in lung tissues from patients with idiopathic pulmonary arterial hypertension and CTNNB1 is involved in vascular remodeling via the Wnt/β-catenin pathway [37]. It has been shown that, in pulmonary artery smooth muscle cells, inhibition of TP53 results in upregulation of glycolysis and downregulation of mitochondrial respiration, indicating a proliferative phenotype resembling that of cancer cells [38]. Feng et al. demonstrated that miR-31a-5p targets TP53 to promote primary hypertension through accelerating proliferation and inhibiting apoptosis of arterial smooth muscle cells, suggesting a potential role of TP53 in pulmonary arterial hypertension [39]. In our study, specific cancer stem cell marker genes were enriched for tissue remodeling functions. We hypothesized that cancer stem cells may be involved in CTEPH by participating in tissue remodeling.

However, one of the limitations of our study was the relatively small sample size, which might be a consequence of the single-center study as here, the short duration of patient inclusion, and the low incidence of disease. A multicenter research involving a larger sample size may, in the future, provide additional strong evidence to support our findings reported here. Moreover, unidentified cells accounted for 20% of all cells. Elucidation of the fate of this large fraction of cells may provide new perspectives to better reveal the pathological mechanisms involved in CTEPH. Lastly, this study, for the first time, conducted scRNA-seq to reveal the cellular composition involved in CTEPH—essentially at single-cell resolution—and represents an exploratory study that provides a valuable resource facilitating researchers in future investigations of the possible mechanisms underlying CTEPH. However, CTEPH patients are rare and there are fewer CTEPH patients who eligible to receive surgical interventions. Coupled with the fact that this was a single-center study, it is difficult to assemble sufficient patient numbers and samples to carry out subsequent experiments in a short period of time. Therefore, we did not examine the pathology of cell types in CTEPH patients via histological analysis by immunohistochemistry to confirm our findings obtained from scRNA-seq, nor did we perform functional examinations of these cells. Further studies are still needed to combine clinical characterization of patients with experimental validation of existing clusters to explore possible mechanisms underpinning the disease.

In conclusion, our scRNA-seq analysis revealed that fibroblast/smooth muscle cells/myofibroblasts and endothelial cell populations may be involved in CTEPH development by participating in important functions associated with muscle or endothelial cell migration involving pulmonary vascular remodeling. Macrophage, mast cell, T cell/NK cell, and CRISPLD2+ cell are implicated in CTEPH via their involvement in inflammatory and immune responses. Cancer stem cells may be involved in CTEPH via participation in tissue remodeling. Collectively, our study provided the first atlas detailing the cellular landscape in pulmonary endarterectomized tissues of CTEPH patients, which will help us to better understand the pathological mechanisms involved in this disease.

Requirements for ethical approval and written informed consent were waived for this study because discarded pulmonary endarterectomized tissues of CTEPH patients were used here.

Five consecutive patients were enrolled from October 2019 to June 2020 and definitively diagnosed with CTEPH. Pulmonary endarterectomized tissues from five CTEPH patients undergoing PEA were collected and stored in a tissue preservation solution. The baseline characteristics of these CTEPH patients are shown in Table 1.

The single-cell suspensions were loaded onto a Chromium™ Single-Cell Instrument (10× Genomics, Pleasanton, CA, USA) to create barcoded single-cell gel beads in emulsion (GEM), followed by reverse transcription and cDNA amplification. scRNA-seq libraries were then generated. Briefly, cDNA was sheared to 200–300 bp and then subjected to end repair and A-tailing, adapter ligation and sample index labeling for polymerase chain reaction, and sample cleanup. After quality checks, scRNA-seq was performed on the Illumina NovaSeq platform to obtain DNA sequencing data.

All scRNA-seq data for the five samples were processed and quantified using Cell Ranger Software Suite v.3.1.0 software tools (https://support.10xgenomics.com). First, the sequenced reads were mapped to the hg19 human reference genome under the Cell Ranger ‘count’ module. We generated five-feature barcode matrices for each of the five samples independently. These matrices were then aggregated using the Cell Ranger ‘aggr’ module for subsequent analyses. Second, cells with gene numbers < 200 or > 7,500, mitochondrial gene expression ratio > 0.2, and at least one gene expressed in three cells were filtered using Seurat v.3.0 (https://satijalab.org/seurat/) [40]. Data were then normalized using the NormalizeData function (pbmc, normalization.method = "LogNormalize," scale.factor = 10000). The UMI count matrix was then converted to Seurat objects using Seurat v.3.0.

After data normalization and scaling, and dimensionality reduction of the top-20 components, cell clusters were identified using the ‘FindClusters’ function in Seurat v.3.0 and then visualized using the UMAP method after running ‘RunUMAP.’ Marker genes corresponding to each cell cluster were identified based on differential analysis using the ‘FindMakers’ function of the Seurat package and Wilcoxon rank-sum tests. The differential expression thresholds were set as log-fold change > 1 and P value < 0.05. The marker genes were then used to annotate cell types using the SCSA tool [41]. Violin plots of key marker genes were constructed using ggplot2 [42].