The study was aimed at deciphering the function and mechanism of circ_0081001 in osteosarcoma (OS). In this study, quantitative real-time polymerase chain reaction (qRT-PCR) was utilized for quantifying circ_0081001, miR-494-3p, and BTB domain and CNC homolog 1 (BACH1) mRNA expressions in OS tissues and cells. Cell counting kit-8 (CCK-8) assay, together with 5-Ethynyl-2'-deoxyuridine (EdU) assay, was performed for evaluating cell proliferation; the alterations in apoptosis were analyzed utilizing flow cytometry; Transwell assay was conducted for examining cell migration and invasion; moreover, Western blot was utilized for the quantification of BACH1 protein expression; bioinformatics, dual-luciferase reporter gene, and RNA-binding protein immunoprecipitation assays were executed for validating the binding relationships between circ_0081001 and miR-494-3p, and between miR-494-3p and BACH1. As shown, circ_0081001, whose expression was elevated in OS tissues, had a negative association with miR-494-3p expression and a positive correlation with BACH1 expression. After circ_0081001 was overexpressed, the proliferation, migration, and invasion of OS cells were boosted but the apoptosis was reduced, whereas miR-494-3p exhibited opposite effects. The binding sites between circ_0081001 and miR-494-3p, and between miR-494-3p and the 3’UTR of BACH1 were experimentally verified. In conclusion, circ_0081001/miR-494-3p/BACH1 axis promoted the malignant biological behaviors of OS cells.

Osteosarcoma (OS) is identified as a common malignancy amongst children and teenagers [1]. Despite the great progress in the therapeutics of OS, the prognosis remains unsatisfactory due to distant metastasis and recurrence [2]. Towards this end, it is vital to better deepen the mechanism of OS growth, as it will aid in the development of novel therapeutic strategies [3].

At the post-transcriptional level, microRNAs (miRNAs) suppress gene expression [11]. Besides, miRNAs can regulate proliferation, apoptosis, metastasis, and metabolism of cancer cells in multiple cancers [12–15]. MiR-494-3p features prominently in the progression of multiple cancers. MiR-494-3p, for example, whose expression is down-regulated in ovarian cancer, constrains cell proliferation and facilitates apoptosis [14]. In OS, miR-494-3p impedes the above malignant biological behaviors of OS cells by repressing insulin receptor substrate-1 [15].

By analyzing the miRNA expression profile in GSE28423, the down-regulation of miR-494-3p expression was uncovered in OS tissues as against in normal bone tissue, and meanwhile, miR-494-3p was predicted to be a downstream target of circ_0081001 by CircInteractome database (Figure 1A, 1B). Besides, the results unmasked that BACH1 was one of the downstream target genes of miR-494-3p (Figure 1C). Gene ontology (GO) enrichment analysis was utilized for predicting the potential biological function of miR-494-3p, and BACH1 also partook in regulating DNA-templated, which might influence the growth of the tumor cells (Figure 1D). Interestingly, through analyzing GSE11414, it was revealed that BACH1 expression, among the potential targets of miR-494-3p, was elevated in OS cell line in comparison to in normal human osteoblasts (Figure 1E, 1F). Collectively, a scientific hypothesis that in OS, circ_0081001/miR-494-3p/BACH1 axis could probably regulate OS progression was proposed. 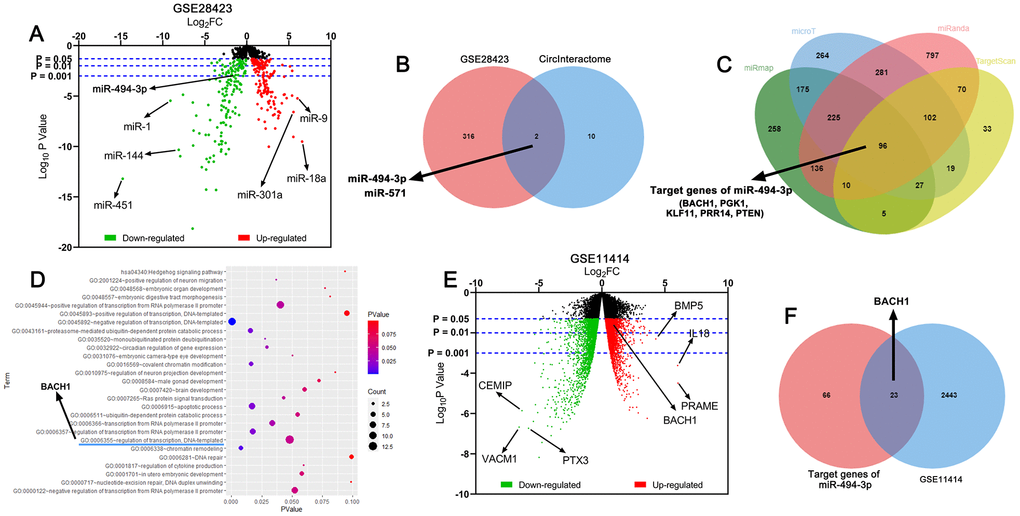 Table 1. The correlation between circ_0081001 expression and the pathological characteristics of the patients. 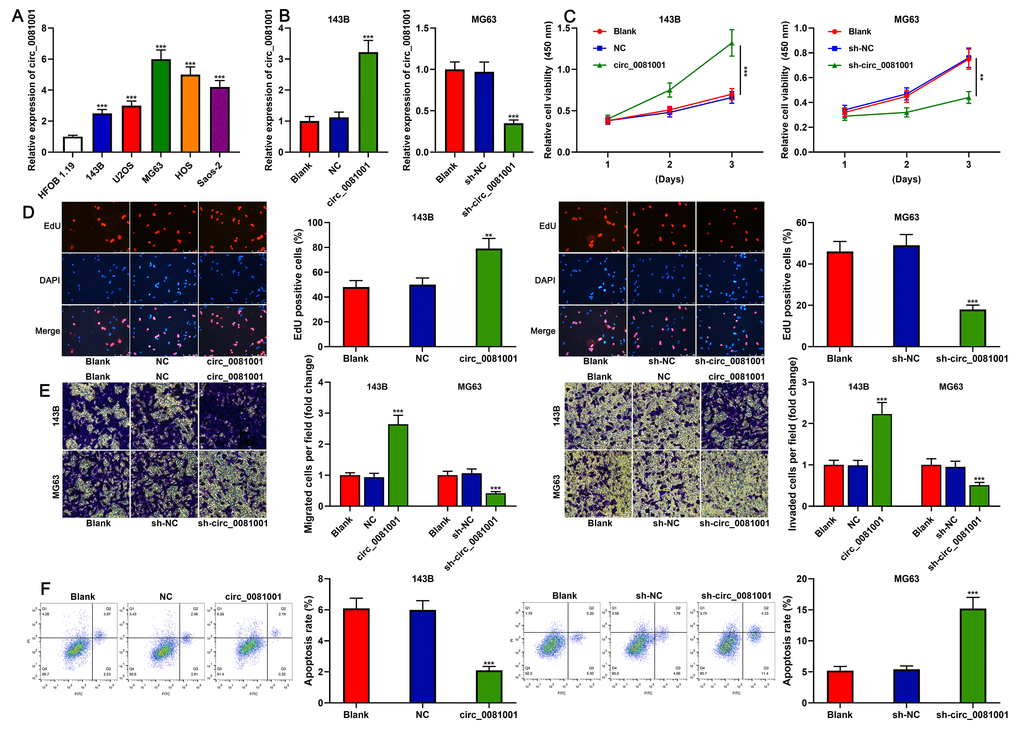 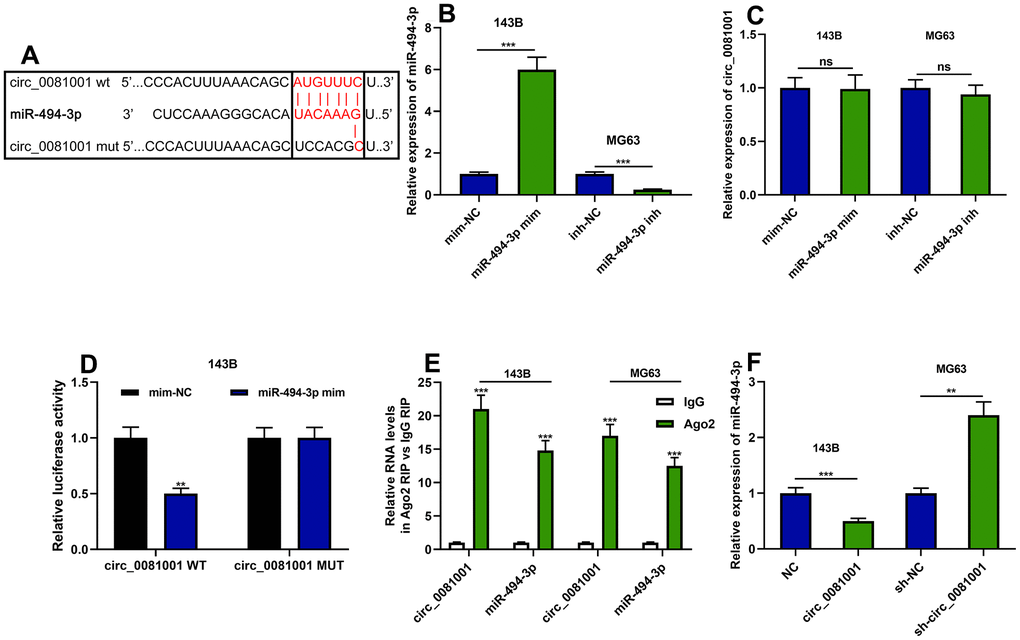 The effects of circ_0081001 on regulating the proliferation, migration, invasion, and apoptosis of OS cells were dependent on miR-494-3p 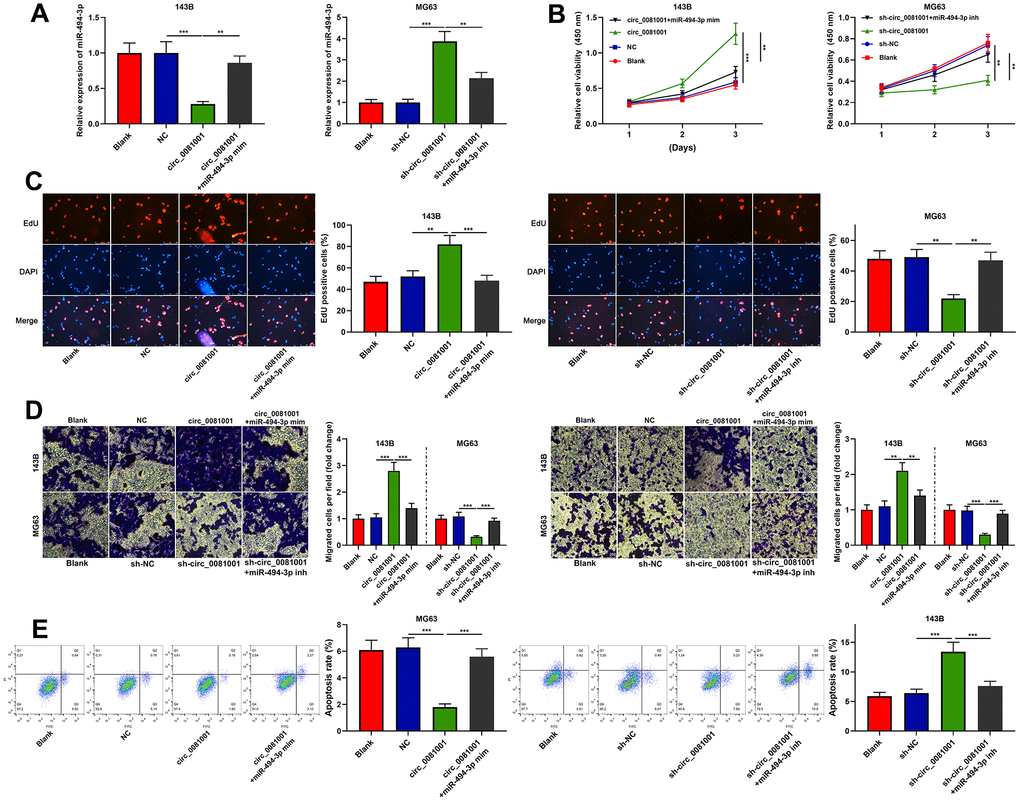 CircRNAs feature prominently in the pathogenesis of human diseases, including tumors [4]. Compared with linear RNA, circRNAs, endowed with more stable structures and longer half-life time, possess a promising prospect in the diagnostics and therapeutics of tumors [16]. Several circRNAs are, reportedly, involved in progression of OS. Circ-ITCH expression, for example, is elevated in OS, and circ-ITCH activates PTEN/PI3K/AKT signaling pathway by targeting miR-22, thereupon repressing malignant biological behaviors of OS cells [6]. Circ_0051079 expression is elevated in OS tissues and cell lines, accelerating the biological function of OS cells by modulating miR-26a-5p/TGF-β1 axis [7]. Circ_0081001 is found to be one of the independent diagnostic predictors of OS [10]. In our current research, a significant up-regulation of circ_0081001 expression was observed, which was consistent with the previous reports [10]. Additionally, this work substantiated that circ_0081001 impeded apoptosis and facilitated proliferation, migration, and invasion of OS cells. Our work clarified the biological function of circ_0081001 in OS and defined it as an oncogenic circRNA.

In this work, the downstream mechanism of circ_0081001 and the regulatory relationship between miR-494-3p and circ_0081001 were explored. Reportedly, miR-494-3p partakes in the tumorigenesis and progression of some tumors. MiR-494-3p expression, for instance, is reduced in cervical cancer tissues, and miR-494-3p overexpression suppresses cervical cancer cell proliferation and invasion [17]. Besides, miR-494-3p expression in prostate cancer tissues is observably up-regulated, and a positive correlation between its expression and prostate specific antigen level in the serum of the patients is observed, suggesting that miR-494-3p is a promising biomarker of prostate cancer diagnosis [18]. MiR-494-3p can enhance the inhibitory effect of TNF-related apoptosis-inducing ligand on the process of gastric cancer cells and the promoting effect on apoptosis [19]. Besides, it is reported that miR-494-3p suppresses malignant biological behaviors of OS cells by inhibiting insulin receptor substrate-1 [15]. Additionally, miR-494-3p represses the proliferation and metastasis of U2OS and MG63 cells by targeting CDK6 [20]. In our work, miR-494-3p expression was observed to be observably reduced in OS specimens; the inhibitory effects of miR-494-3p on malignant biological behaviors of OS cells were further validated, and circ_0081001 was proven as a ceRNA for miR-494-3p; moreover, BACH1 was identified as a target gene of miR-494-3p in OS.

BACH1 belongs to the cap'n'collar (CNC) and leucine zipper (b-zip) family [21]. BACH1, widely expressed in various tissues, can regulate fundamental physiological processes by combining with Maf recognition elements [22]. Recent studies report that the aberrant expression of BACH1 affects the progression of multiple cancers. For example, in lung cancer, BACH1 activates the transcription of Hexokinase 2 and GAPDH, enhances the uptake of glucose of cancer cells, improves the glycolysis, and alleviates oxidative stress-induced damage of cancer cells, hence facilitating cancer cell metastasis [21]. In addition, in ovarian cancer, BACH1 boosts the metastasis of cancer cells by enhancing the expressions of Slug, Snail, and HMGA2 [23]. Importantly, a recent study reports that BACH1 is dysregulated in OS tissues, which is mediated by circ_0000337/miR-4458 axis [24]. In our current research, we found that circ_0081001 indirectly augmented BACH1 expression by targeted decreased miR-494-3p expression, thereupon enhancing malignant biological behaviors of OS cells. Our research further clarifies the upstream regulatory mechanism of BACH1 in OS.

In summary, our current research unmasks a novel ceRNA network consisting of circ_0081001/miR-494-3p/BACH1 in OS progression, which may offer valuable clues for the diagnosis and treatment of OS.

Fifty-one OS patients had their cancer tissues extracted. Prior to the surgery, none of these enrolled patients received neoadjuvant treatment such as chemotherapy and radiotherapy. In the control group, the specimens obtained from adjacent tissues (normal cartilage tissues) were examined by postoperative pathological analysis, and no cancerous cells were found.

The cells, after being transferred into a 96-well plate (2×103 cells/well) for 1 d, were incubated with 10 μL of CCK-8 kit (Beyotime, Shanghai, China) for 4 h. Then, a microplate reader was adopted to measure the absorbance450nm. Similarly, the absorbance of the cells at 48 h and 72 h after the inoculation was determined. Finally, the proliferation curves of the cells in each group were plotted.

143B or MG63 cells were supplemented to the upper compartment of Transwell system (pore size, 8 μm, 2×104 cells/well; Corning, NY, USA), and meanwhile, 600 μL of medium containing 20% FBS was dripped into the lower one. The cells in the upper compartment were separated after 12 h, and migrated or invaded cells were then fixed with 4% paraformaldehyde, stained with 0.1% crystal violet, and washed with PBS, followed by being dried, photographed, and counted.

Magna RIP™ RNA-Binding Protein Immunoprecipitation Kit (Millipore, Billerica, MA, USA) was adopted to unmask the correlation between circ_0081001 and miR-494-3p. To put it crudely, the lysis buffer containing RNasin (Takara Biotechnology Ltd., Dalian, China) and protease inhibitor (B14001a, Roche, Basel, Switzerland) was employed to lyse the cells treated with pre-cooled PBS prior to the centrifugation at 12000 g for 30 min. Then, cell lysates were incubated with magnetic beads-coupled with antibody against anti-Argonaute 2 (Ago2) or anti-immunoglobulin G (IgG) (Abcam, Cambridge, UK) at 4° C overnight. Then, proteinase K was incubated with the mixtures, and RNeasy MinElute Cleanup Kit (Qiagen, Shanghai, China) was employed to extract the immunoprecipitated RNA for subsequent qRT-PCR reaction.

OS cells in each group were incubated with pre-cooled RIPA lysis buffer (Beyotime, Shanghai, China) on the ice for 20 min prior to the centrifugation at 13000 r/min at 4° C for 5 min. With supernatants collected as the protein samples, BCA method was employed to quantify the concentration in the samples. After mixing the protein samples with the loading buffer, they were denatured in boiling water for 10 minutes. Next, the polyvinylidene fluoride (PVDF) membrane (Beyotime, Shanghai, China) was employed to transfer the separated protein samples. Then, the membrane incubated with 5% BSA at ambient temperature for 2 h and then with primary antibody anti-BACH1 (ab128486, 1:1000, Abcam, Shanghai, China) at 4° C overnight was rinsed 5 times with TBST and then incubated with secondary antibody [goat anti-mice IgG H&L (HRP) (ab205719, 1:2000, Abcam, Shanghai, China)] for 1 h at ambient temperature. Besides, protein bands were developed employing ECL kit (Amersham Pharmacia Biotech, Little Chalfont, UK) with β-actin utilized as the endogenous control.

SPSS16.0 software (SPSS Inc., Chicago, IL, USA) was adopted to analyze the data expressed as mean ± SD (x ± s). The independent sample t-test and one-way ANOVA were employed to conduct the comparisons of the data between two groups and amongst multiple groups, respectively. Chi-square test was utilized for the analysis of the correlation between circ_0081001 and patients' pathological characteristics. P<0.05 demonstrated statistical significance.

Our research was approved by the Ethics Committees of Linyi People's Hospital. The written informed consent was acquired from each participating patient. All protocols were conducted in accordance with the principles of the Declaration of Helsinki.

The data used to support the findings of this study are available from the corresponding author upon request.

We thank Hubei Yican Health Industry Co., Ltd. for its linguistic assistance during the preparation of this manuscript.

This study was supported by the Key Research and Development Project of Shaanxi Province (Grant No. 2018ZDXM-SF-057).