Recent studies focus on long noncoding RNAs (lncRNA) as crucial regulators of cancer biology that contribute to essential cancer cell functions such as cell proliferation, apoptosis, and metastasis. In pancreatic cancer, several lncRNAs have been mentioned as important actors in tumorigenesis. However, the function of lncRNA ANRIL (named as ANRIL as follows) in pancreatic cancer has not been elucidated. In the present study, we show that ANRIL was up-regulated while miR-181a was down-regulated in pancreatic cancer tissues and HMGB1 was highly expressed. Knockdown of ANRIL in pancreatic cancer repressed cellular proliferation, invasion, migration, and reduced chemotherapy resistance to gemcitabine. ANRIL was negatively correlated with miR-181a, while overexpression of miR-181a could reverse the effect. For further mechanism research, we found that miR-181a aimed to HMGB1 which activated cell autophagy. Taken together, our results implicate that the ANRIL, by targeting miR-181a, activates the HMGB1-induced cell autophagy, which is thought to be critical for oncogenesis.

Pancreatic cancer (PC) as a kind of common and frequent malignancy across the world, which may the major causes of cancer mortality in developed countries [1, 2]. Pancreatic cancer is still a destructive malignant disease although the progress development of surgical techniques and adjuvant drugs. Its median survival time is about 3–6 months and the five-year survival rate is less than 5% [3]. The morbidity of pancreatic cancer in China is lower compared with western countries but it has increased high in recent years. It has been reported that there are about 34509 men and 23226 women that die in pancreatic cancer, and the number of deaths exceeded that of the United States [3]. Therefore, this malignant tumor tends to be in late stage after definite diagnosis due to progress rapidly [4]. About 15–20% patients were diagnosed as resectable PC because of these factors and characteristic of specific anatomy, but most of them were diagnosed as locally advanced or metastatic disease with poor prognosis [5]. Therefore, it is better to learn the mechanism of PC and identify the innovative biological targets.

Long non-coding RNAs (lncRNAs) are transcripts more than 200 nucleotides in the length which have no obvious protein-coding functions [6]. ANRIL, namely CDKN2B-AS), is a long-chain non-coding RNA transcribed from the CDKN2A / B gene cluster on the Chr9p21 chromosome and plays an important role in tumor formation. Researches have indicated that the expression of ANRIL is significantly increased in nasopharyngeal carcinoma [7], and it also promotes cancer development, for example, lung cancer [8], and gastric cancer [9].

miR-181a has already been demonstrated to be an inhibitor of miRNA in many malignancy, such as breast cancer [10], oropharyngeal cancer [11], etc. However, the activity and role of miR-181a in tumor needs further study. HMGB1, as one of the targets of miR-181a, exhibits an essential effect on the inflammatory response [12], and also has stimulative effects in carcinogenesis [13].

The RNA level of ANRIL, HMGB and miR-181a in PANC-1 cells and BxPC-3 cells was measured with qRT-PCR. Total RNA was extracted using Trizol RNA isolation Kit. qRT-PCR were performed using Transcriptor First Strand cDNA Synthesis Kit (Fermentas, USA). The results were standard by the expression level of β-actin (internal reference for HMGB) or U6 (internal reference for ANRIL or miR-181a) and the average were analyzed by 2−ΔΔCt method.

Usually, the shRNA specific for ANRIL was chemo synthesized by Genepharma (Shanghai, China). Then, the cell transfection was performed according to the instructions of Lipofectamine™ 2000 (Invitrogen, Thermo Fisher Scientific, USA). The detailed information of the siRNA sequence was described as follows: TTATGCTTTGCAGCACACTGG.

ANRIL and HMGB1 are highly expressed in pancreatic cancer 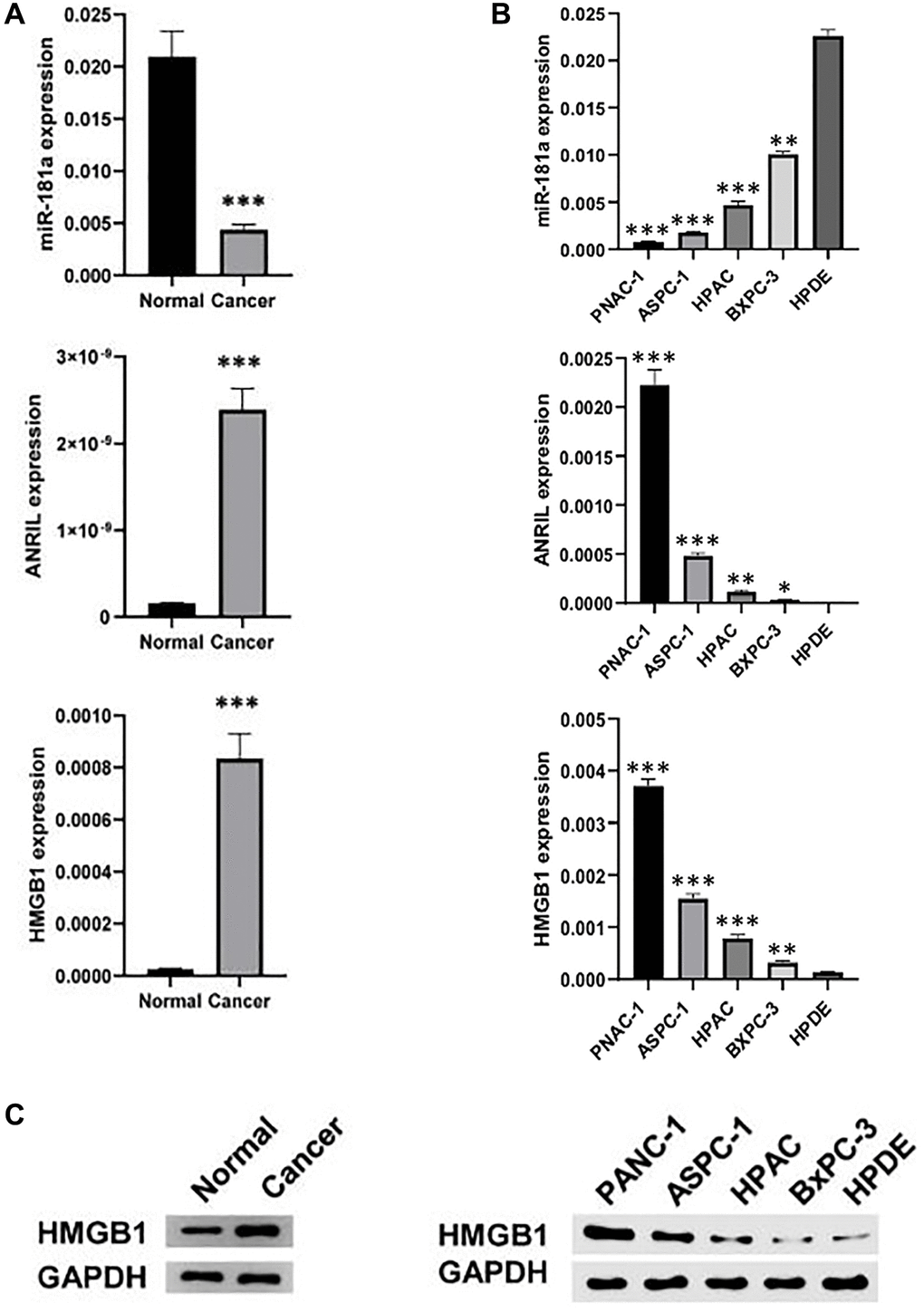 Effects of ANRIL knockdown on proliferation, invasion, and migration of pancreatic cancer cells by promoting autophagy 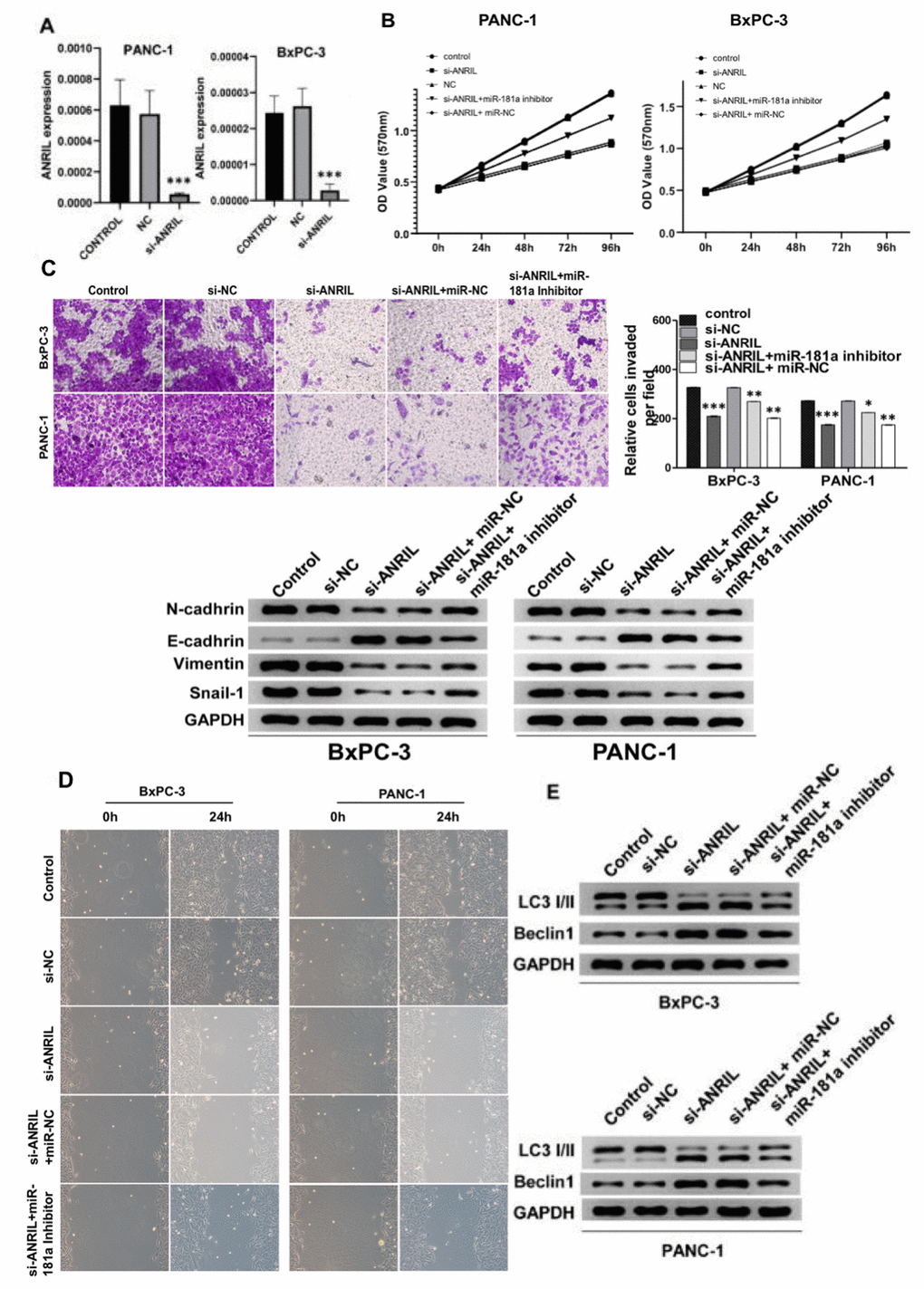 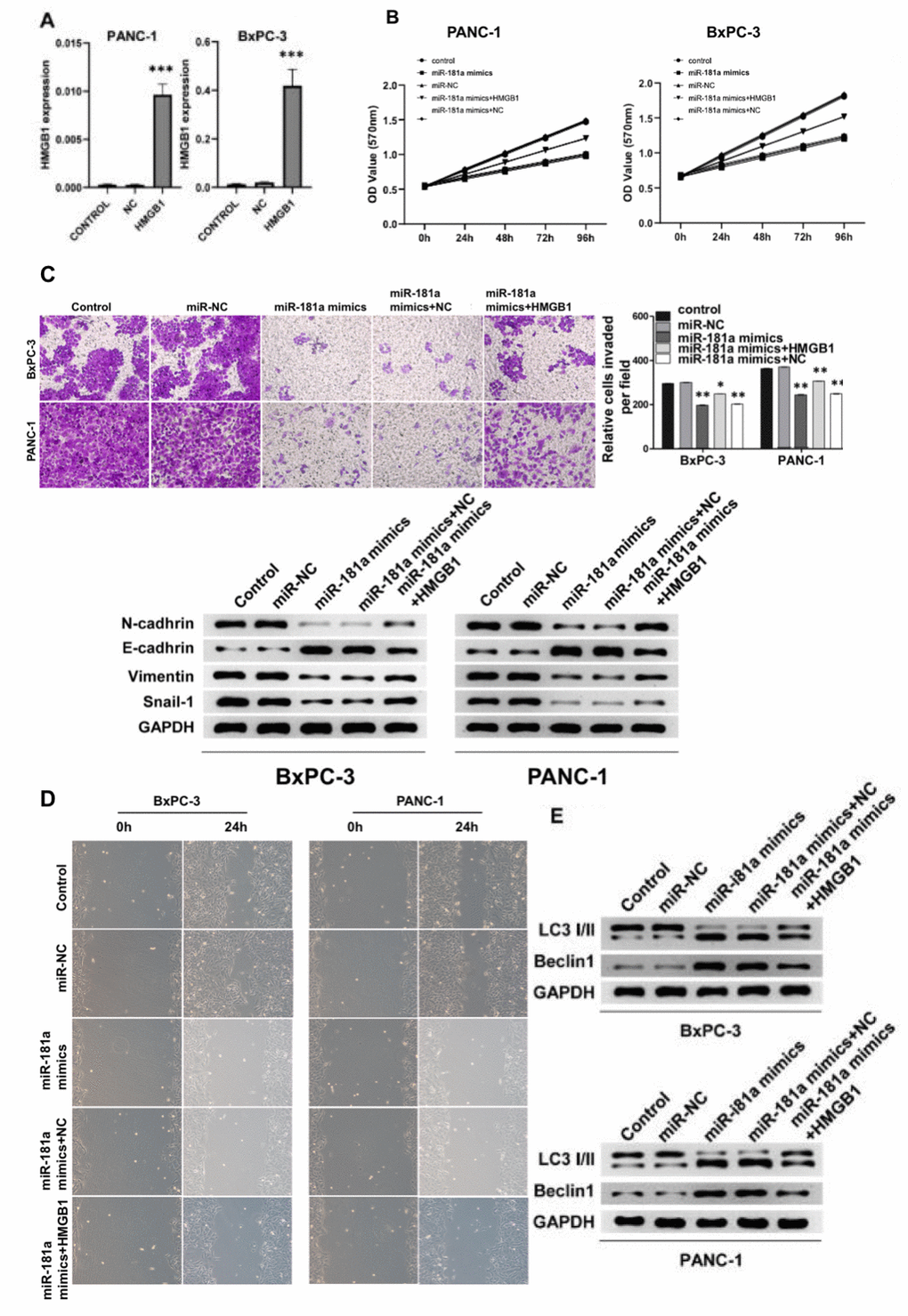 Since HMGB1 could reverse the effect of miR-181a on pancreatic cancer cells, we further explored the relationship between them. We cloned the promoter region of HMGB1 into a double luciferase reporter vector, and then mutated the predicted binding region of HMGB1 to miR-181a, and the diagram of wild type (WT) and mutant (MUT) was illustrated in Figure 4A. Analysis of relative luciferase activity showed that miR-181a significantly repressed the relative luciferase activity of WT reporter, however, when MUT reporter was concerned, it did not response to miR-181a mimics compared to NC (Figure 4B). qRT-PCR and western blot analysis showed that overexpression of miR-181a down-regulated HMGB1 expression at the mRNA level and protein level in BxPC-3 and PANC-1 cells in vitro (Figure 4C, 4D). 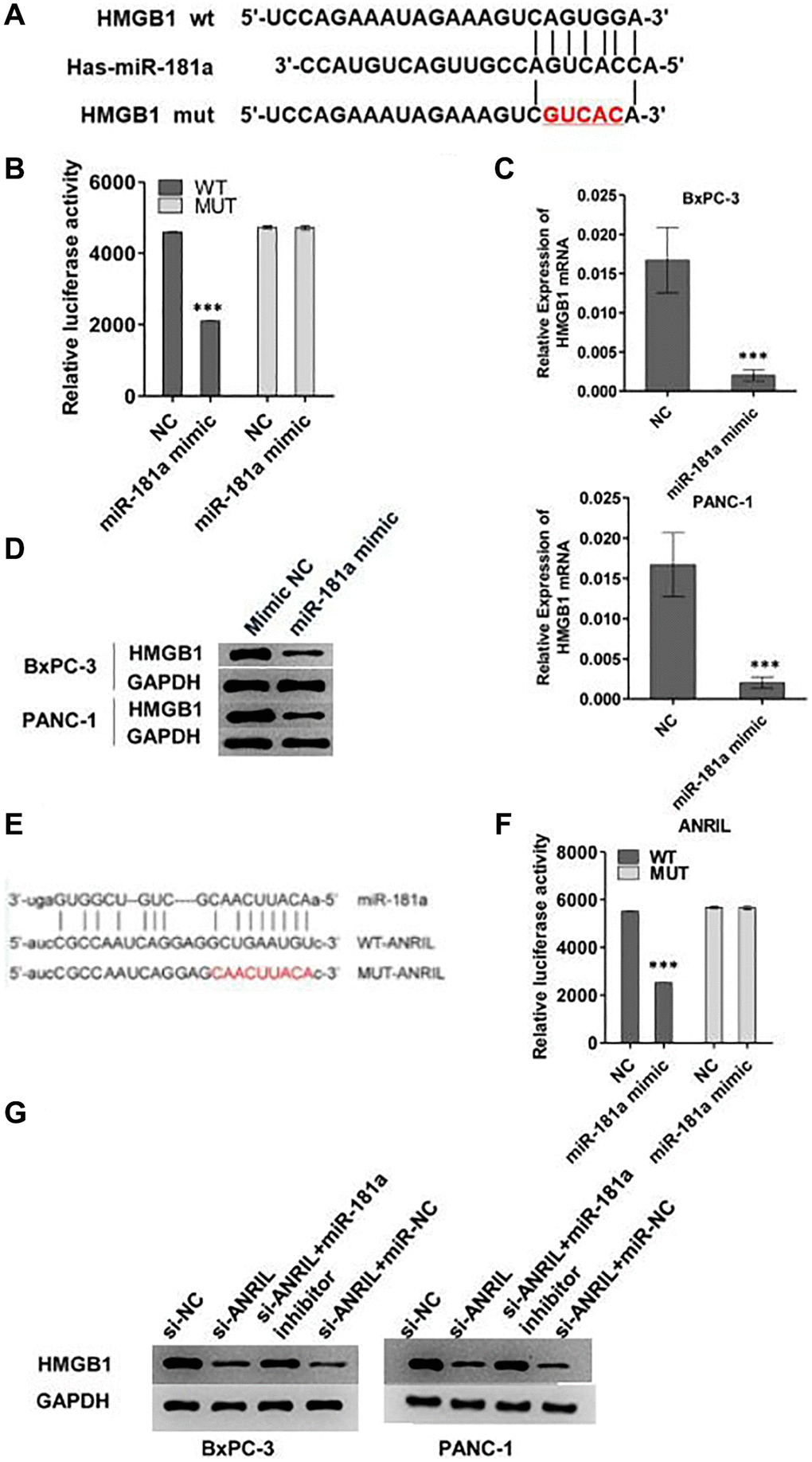 To explore the role of ANRIL in this pathway, we mutated the binding site of ANRIL to miR-181a which was shown in Figure 4E. Consistent with the above results, miR-181a mimics inhibited the relative luciferase activity of WT ANRIL, while there was no response of MUT ANRIL to miR-181a mimics (Figure 4F). Western blot and qRT-PCR analysis showed that si-ANRIL decreased the expression of HMGB1 in BxPC-3 and PANC-1 cells, while miR-181a inhibitor reversed this effect (Figure 4G). These results indicated that ANRIL regulated the expression of HMGB1 by inhibiting the activity of miR-181a in pancreatic cells. 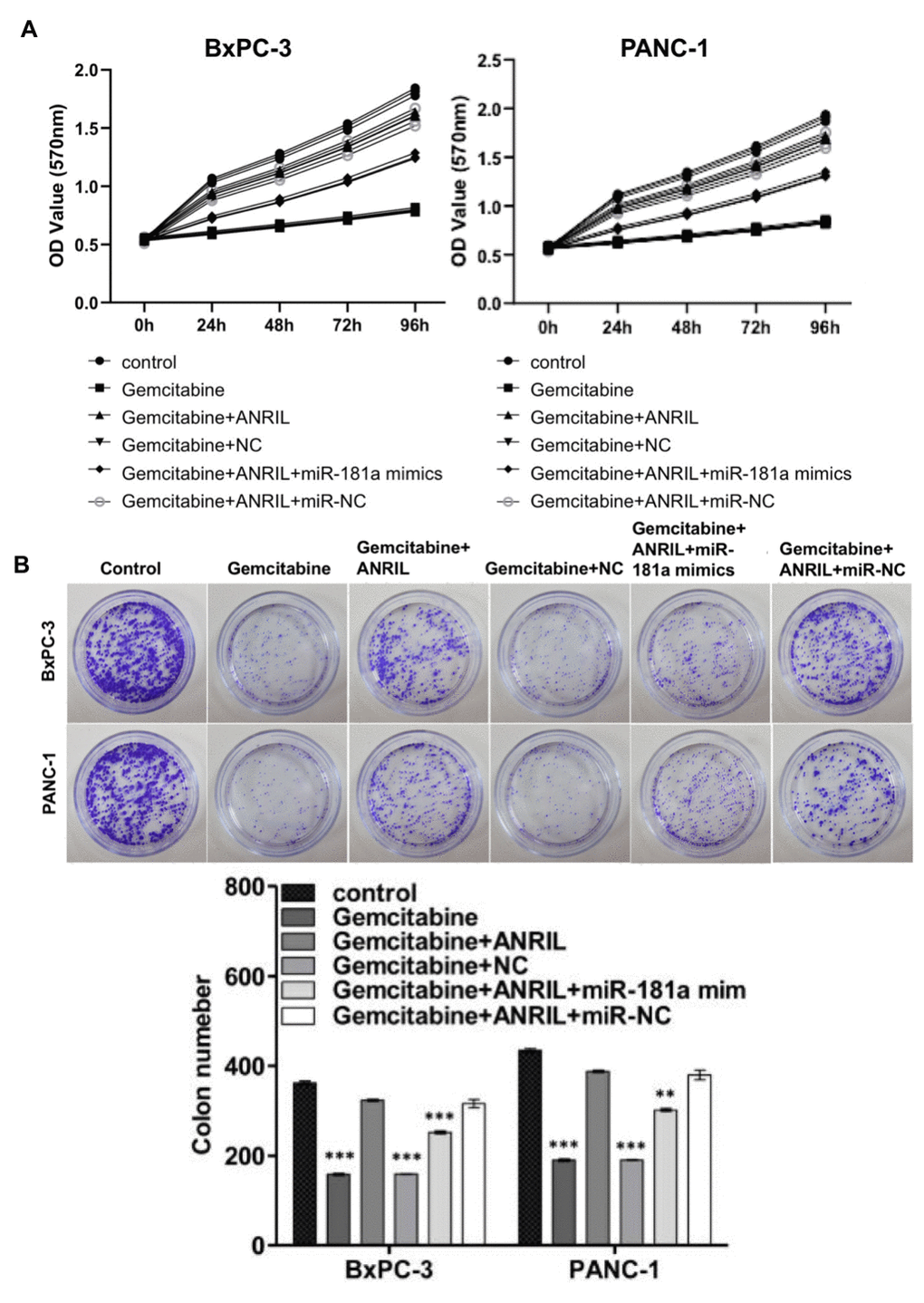 Figure 5. ANRIL increases resistance of pancreatic cancer cells to gemcitabine chemotherapy. (A) MTT assay showed that overexpression of ANRIL resisted the inhibition of pancreatic cancer cells by gemcitabine, but miR-181a mimics reversed the effect which caused by ANRIL. OD value reflected the relative proliferative activity of each group. (B) Colony formation assays suggested the effects of miR-181a, ANRIL and gemcitabine on the proliferation of PANC-1 cells and BxPC-3 cells. *P < 0.05, **P < 0.01, ***P < 0.001.

It has illustrated that lncRNAs possess pivotal roles in occurrence of cancers, such as melanoma, lung cancer, glioblastoma, and esophageal adenocarcinoma, nasopharyngeal carcinoma, gastric cancer and so forth [7–9, 14]. The mechanism of lncRNAs in recent years are growing concern, but it is still far from elucidated in tumorigenesis of pancreatic cancer. Researches showed that ANRIL could promote the development and progression of many tumors, but there was no report focusing on the activity of ANRIL in the chemotherapy resistance of pancreatic cancer. We firstly reported that ANRIL could promote the tumor cell proliferation, invasion, migration, and exacerbates chemotherapy resistance to gemcitabine of pancreatic cancer by managing miR-181a/ HMGB1 axis and restraining cell autophagy, which reveal the role of ANRIL and miR-181a in therapy of pancreatic.

ANRIL was famous for its huge non-protein coding region in which the 21 exons could be transcribed into different kinds of circular or linear isoforms [15]. It has reported that ANRIL was not only obviously up-regulated, but promoted proliferation and invasive ability through regulation of miR-181a in cervical cancer [16]. We found that ANRIL was up-regulated in the tissues of pancreatic cancer, while found that ANRIL promotes cell proliferation, invasion, migration in PANC-1 and BxPC-3 cells, as well as enhances chemotherapy resistance to gemcitabine, while knockdown of ANRIL decreased those effects.

miR-181a will take part in virous function of cells including growth, proliferation, survival, death and maintenance [17, 18]. Accumulating evidence confirms that the interactions between lncRNAs and miRNAs will affect post-transcriptional regulation [19]. Research before had indicated that miR-181a could restrain migration and carcinogenesis of breast and colon cancer cells by down-regulating MMP-14 [20]. The interaction between ANRIL and miR-181a had been clarified in laryngeal squamous cell carcinoma, which was negatively correlated [17]. In our research, we further confirmed this conclusion in pancreatic cancer. Overexpression of ANRIL could obviously promote the cell viability and proliferation of PANC-1 and BxPC-3 cells, while after ANRIL knockdown, the cell proliferation was inhibited, so was the invasion and migration. While overexpression of miR-181a reversed that effect.

But, the further mechanisms of miR-181a on cellular behaviors still remained largely unknown. Accumulating evidence showed that interaction of miRNA and HMGB1 involved in EMT, cell apoptosis, and autophagy [21–23]. And previous studies proved that HMGB1 can induce autophagy [24, 25]. We demonstrated that overexpression of miR-181a decreased LC3 I/II but increased Beclin1, which indicated that autophagy was activated. When HMGB1 overexpressed, the result was opposite [26]. To make the relationship between miRNA and HMGB1 clear, we mutated 3′UTR of HMGB1, then we concluded that miR-181a directly targeted to 3′UTR of HMGB1 to activate autophagy. Maybe it is still possible that miR-181a indirectly affects HMGB1 expression, although the 3′UTR has a potential binding site.