Copyright: © 2021 Yan et al. This is an open access article distributed under the terms of the Creative Commons Attribution License (CC BY 3.0), which permits unrestricted use, distribution, and reproduction in any medium, provided the original author and source are credited.

Allergic rhinitis (AR) is an IgE-mediated inflammatory disease of the nasal mucosa in response to allergen exposure, with symptoms such as airflow obstruction, nasal itching, rhinorrhoea, and sneezing [1]. The worldwide incidence of AR has increased dramatically over the last few decades [2, 3]. The prevalence of allergic rhinitis is about 10%-30% in adults and approximately 40% in children [4]. AR significantly impacts the quality of life including school activities of pediatric patients and job productivity of adult patients.

Th1/Th2 cytokine imbalance is a key feature of AR [5]. During allergen exposure, peripheral blood mononuclear cells of AR patients secrete aberrantly high levels of Th2 cytokines and chemokines [6, 7]. These promote excessive infiltration of eosinophils (EOS) and mast cells (MC) that release large amounts of leukotrienes, histamine, and other pro-inflammatory factors in the nasal mucosa, thereby inducing local inflammation, and mucosal damage [8–10]. AR is clinically diagnosed by thorough evaluation of patient medical history as well as allergen testing with in vivo skin prick tests (SPTs) and in vitro estimation of serum allergen-specific IgE levels [11–13]. Second-generation H1 anti-histamines, nasal glucocorticosteroids, and leukotriene antagonists are the first-line drugs for AR patients, whereas, allergen immunotherapy and surgery is prescribed when the first-line drugs are ineffective [2, 14]. In most cases, drugs provide only temporary relief and symptoms relapse after drug withdrawal [15]. Therefore, there is an urgent need to identify effective therapeutic strategies for AR patients.

Traditional Chinese medicine (TCM) has been widely accepted and practiced in China for more than two thousand years [16, 17]. Previous studies have shown that acupoint herbal patching alone or in combination with western medicine is more effective in AR patients than treatment with placebo or western medicine alone [18, 19]. Yan et al. found that intranasal acupuncture combined with Yiqi Jiemin Decoction significantly attenuated the symptom of moderate-severe allergic rhinitis with deficiency of lung and spleen qi [20]. However, the underlying mechanism of Yiqi Jiemin Decoction (YJD), another commonly used TCM for AR, is not known. Therefore, in this study, we performed integrated metabolomics and transcriptomics analyses to determine the underlying therapeutic mechanisms of YJD in the AR model of guinea pigs. 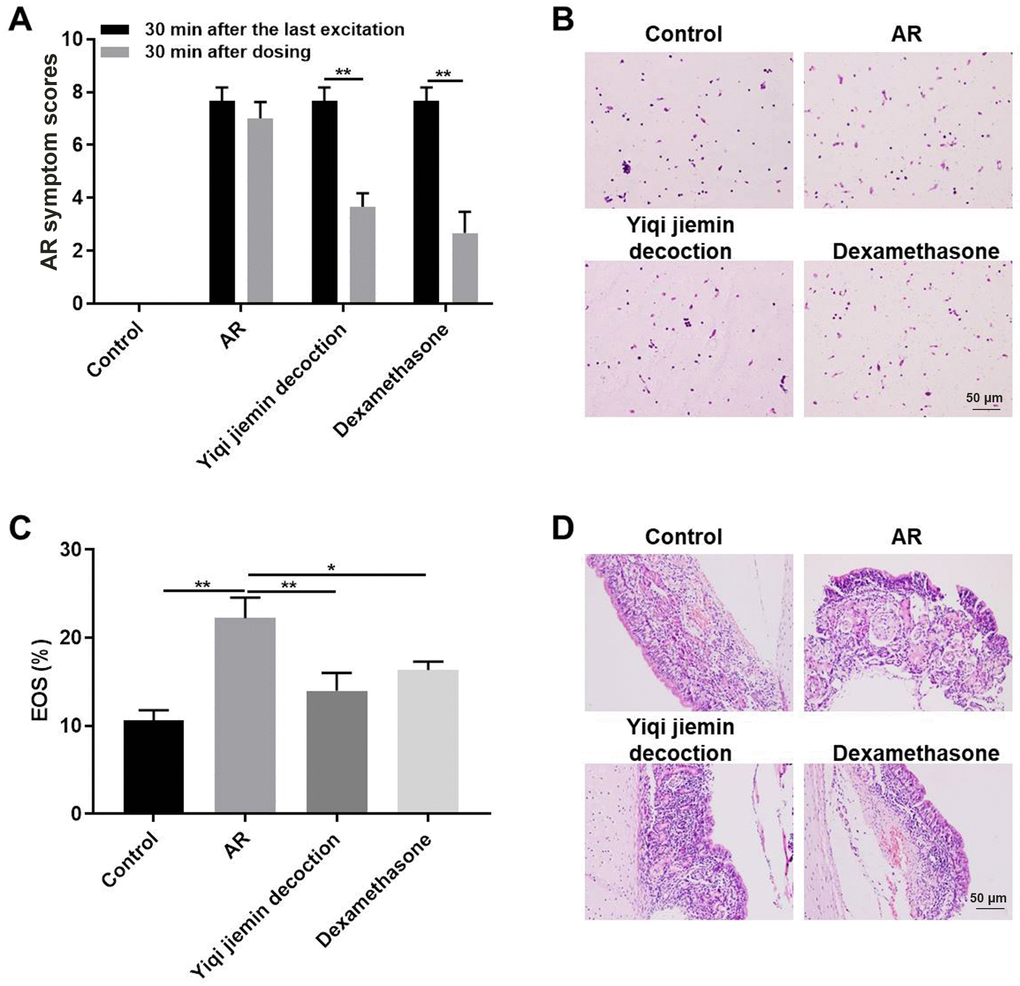 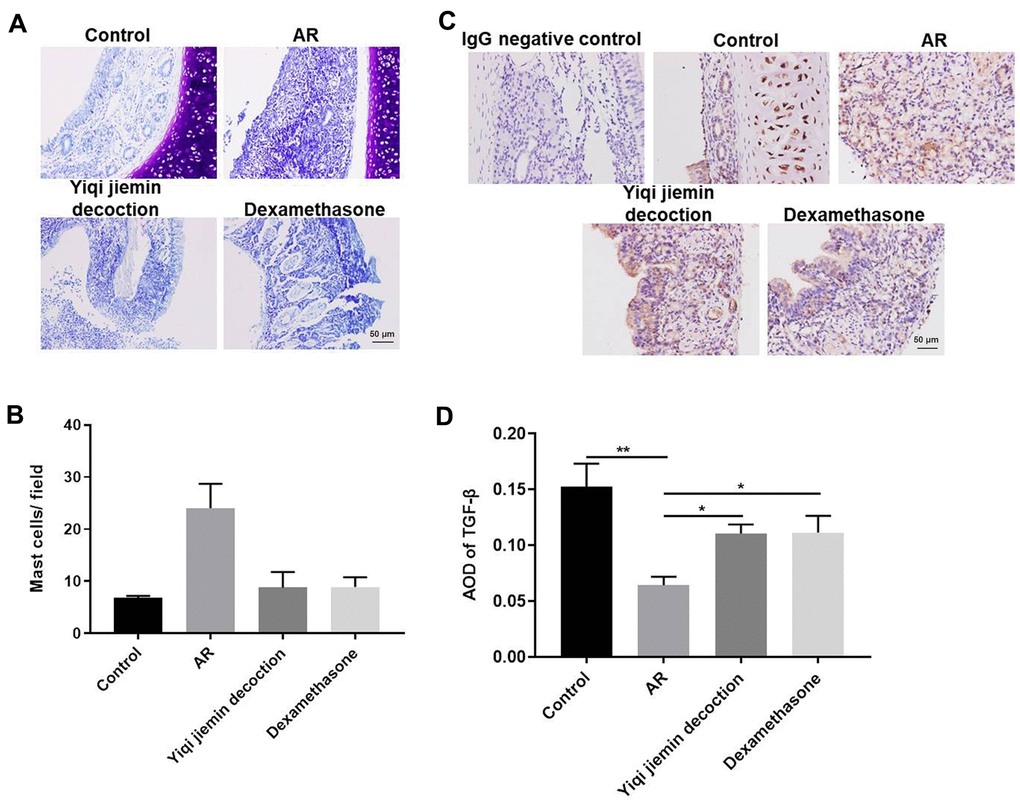 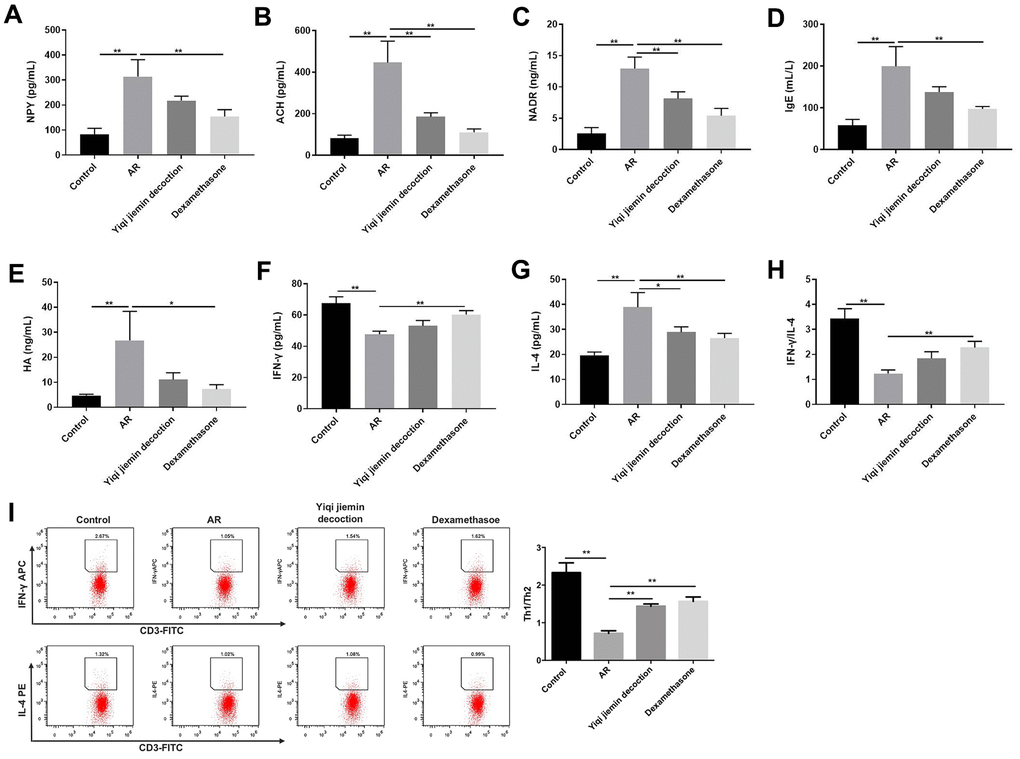 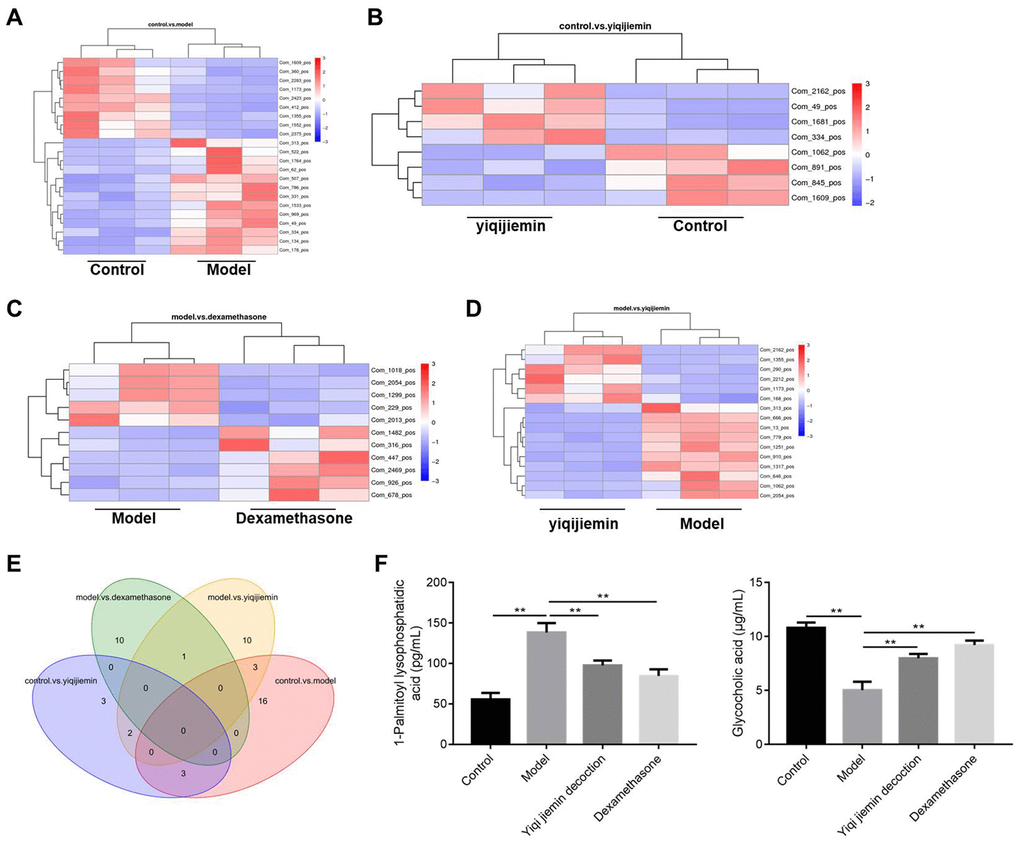 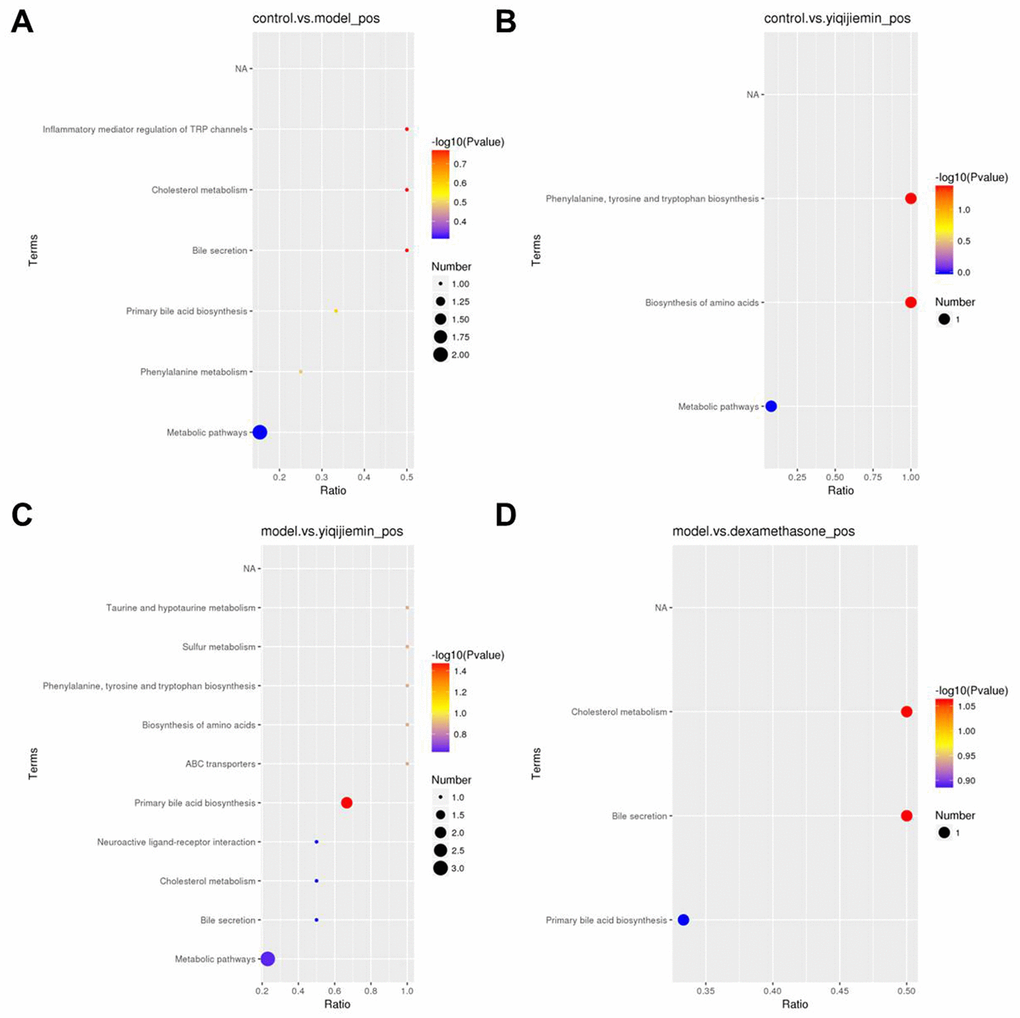 We then performed RNA-seq analyses to determine genome-wide transcriptome changes in the nasal mucosal tissues among the four groups of guinea pigs. 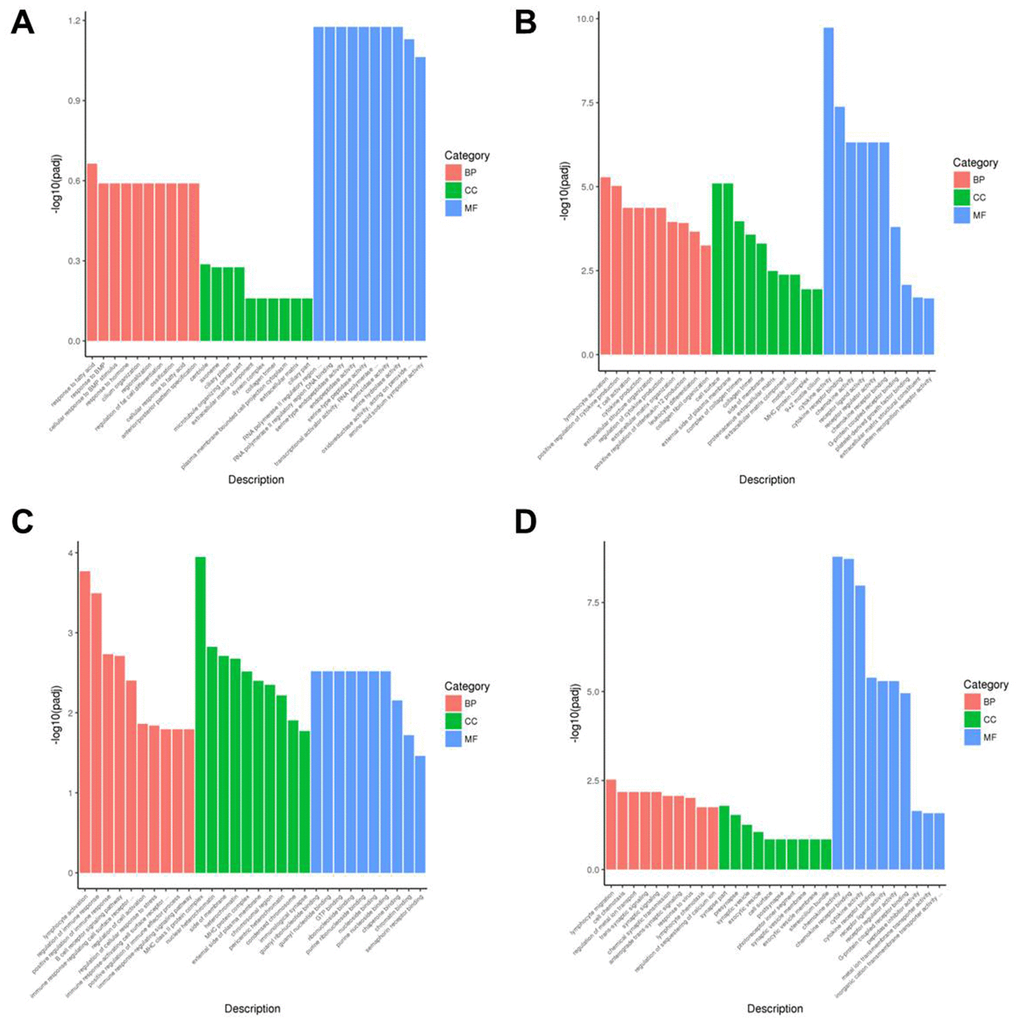 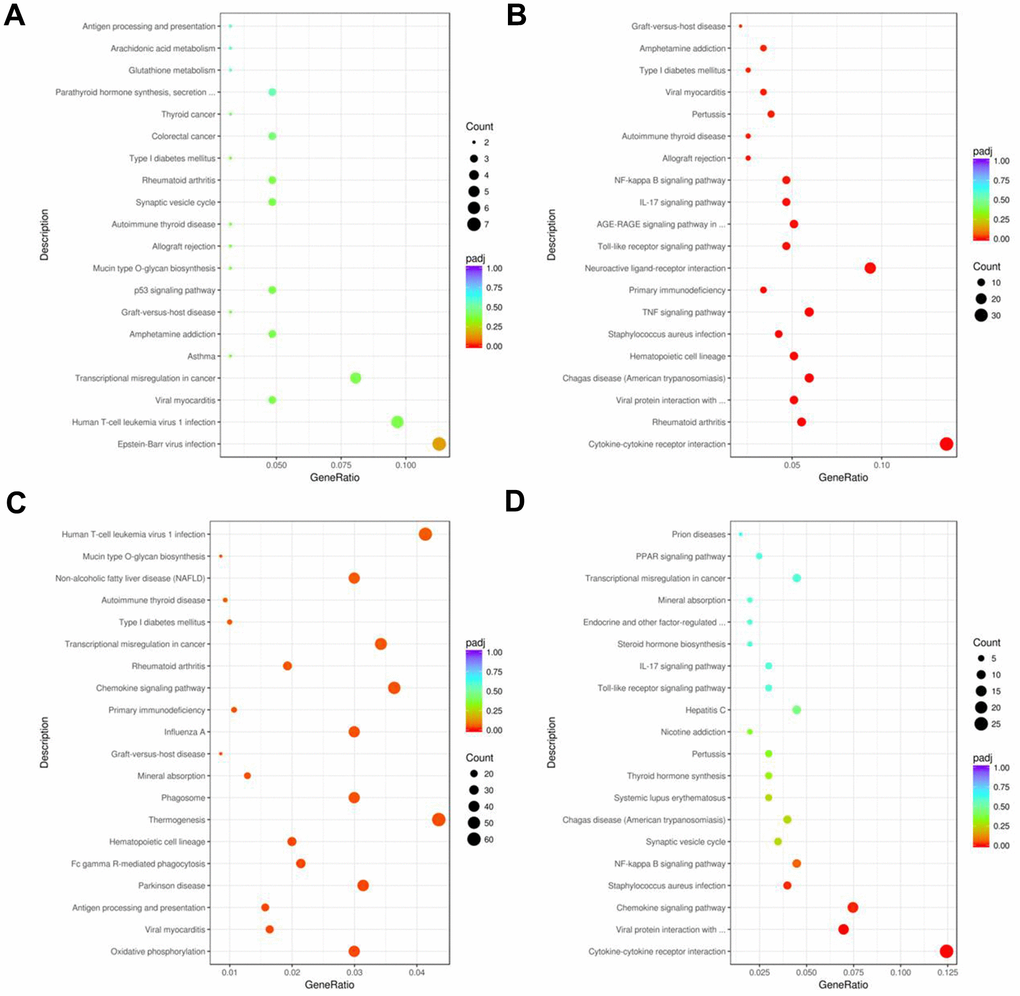 Traditional Chinese Medicines (TCMs) have been used for many centuries to treat multi-factorial diseases including AR. YJD is a widely used TCM regime to treat inflammatory diseases in China [16, 18, 19, 24]. In this study, we confirmed that YJD alleviated OVA-induced AR in the guinea pig model by suppressing inflammation and improving cellular metabolism. Therefore, our study suggested that YJD was a promising treatment for AR patients.

The nasal symptoms of AR are mediated by histamine and other inflammatory mediators, which are secreted by activated MC, eosinophils and basophils [25]. Epithelial barrier dysfunction, allergic sensitization, and hyperactivation of mast cells and eosinophils are involved in the pathogenesis of AR [26]. MC-derived mediators collectively induce acute-phase clinical symptoms of AR by enhancing vascular leakage, bronchospasms, and parasympathetic reflexes linked to the activation of nociceptive neurons [27, 28]. IL-4 mediated IgE production by the B cells is a critical step in the allergic cascade [29]. Th2 cells play an important role in the development of IgE-related diseases such as AR [30]. Th1 cytokines such as IFN-γ suppress the Th2 cell responses and are used in the treatment of IgE-related allergic diseases such as AR [31, 32]. Furthermore, the ratio of IFN-γ/IL-4 levels in the serum is used to determine the balance between Th1 and Th2 immune responses [32]. In this study, our data demonstrated that YJD ameliorated AR symptoms by reducing the secretion of inflammatory cytokines and rebalancing the Th1/Th2 cytokine ratio. These results further demonstrated that YJD suppressed inflammation.

Transcriptomic approaches have been extensively used to identify mechanisms of several drugs [33]. Liquid chromatography coupled with mass spectrometry (LC-MS) and principal component analysis has been used to successfully characterize structures of various biological molecules and their interactions with several drugs [33]. In this study, we showed that both YJD and dexamethasone alleviated AR progression by inhibiting the secretion of inflammatory cytokines. The analysis of metabolite data demonstrated that the serum levels of LPA and GCA were significantly associated with AR. LPA promotes eosinophil recruitment in response to allergen challenge. Moreover, LPA stimulates IL-6 and IL-8 expression via the LPA receptor [34]. GCA plays a protective role in gut mucosal damage by suppressing inflammatory signaling pathways [35]. Our data demonstrated that LPA and GCA were enriched in the metabolic pathways related to inflammation. We further showed that YJD suppressed progression of inflammatory AR disease by partially reversing the levels of metabolites such as LPA and GCA. Moreover, RNA-Seq data analysis revealed differential transcription patterns upon YJD treatment. We identified BPIFB2 as an important diagnostic biomarker for AR and YJD treatment efficacy. BPIFB2 is a protein with strong homology to the BPI protein family in mammals [36]. Previous studies have shown that BPIFB2 is a distinct marker of inflammation; high levels of BPI proteins are released by different pathogens during acute pneumonia; BPIFB2 is also associated with ORF3 regulation in Hepatitis E virus- (HEV-) mediated hepatitis [36]. Therefore, we postulated that YJD suppressed inflammation in AR via BPIFB2. Our findings suggested that LPA, GCA, and BPIFB2 were promising diagnostic biomarkers and therapeutic targets for AR. Functional enrichment analysis of the DEGs showed that YJD treatment significantly altered cytokine secretion in AR. However, further investigations are necessary to confirm our results in human AR patients.

In conclusion, integrated metabolomic and transcriptomic analysis demonstrated that YJD alleviated AR in the in vivo guinea pig model by suppressing inflammation and improving cellular metabolism. We also demonstrated that BPIFB2 was a potential diagnostic biomarker and therapeutic target in AR patients.

We purchased 8-week-old guinea pigs (body weight: 400 ±20 g) from Wuhan Wanqianjiaxing Biotechnology Company (Wuhan, China). They were housed under standard conditions (Temperature: 23 ± 2° C, 12 h light-dark cycle; and 65% humidity) with free access to standard food and water. All animal protocols were approved by the Ethics Committee of Dongzhimen Hospital, The First Affiliated Hospital of Beijing University of Chinese Medicine (Beijing, China), and were carried out according to the National Institute of Health (NIH) guidelines for the care and use of animals.

Preparation and administration of YJD

Establishment of the AR model mice

The AR model guinea pigs were established as described previously with minor modifications [18, 19]. In brief, guinea pigs were sensitized for 15 consecutive days with intraperitoneal injections of 750 μL OVA solution, which consisted of 2 mg ovalbumin (Sigma-Aldrich, USA; cat. no. S7951) emulsified in a 1mg/ml Al (OH)3 solution prepared in 10 mL physiological saline. Then, the sensitized guinea pigs were administered daily with 1% w/v OVA in physiological saline into their nasal cavities from days 15 to 21. After the last OVA treatment, the AR symptoms were evaluated for 30 min using the scoring criteria, which included estimating the frequency of sneezing, nose-rubbing, and the extent of rhinorrhea. The guinea pigs with more than 5 points according to the scoring criteria were considered as AR models.

The guinea pigs were euthanized using isoflurane and decapitated for blood collection. The nasal tissues were harvested, fixed in 4% paraformaldehyde (Sigma-Aldrich, USA; cat. no. 158127) for 2 days, gradually dehydrated with graded series of alcohol, and embedded in paraffin. Then, 4-6 μm serial sections of the paraffin-embedded nasal tissue samples were cut and mounted onto 3-ammonia propyl-3-ethoxy silane (APES)-treated slides. After deparaffinization, the sections were stained with hematoxylin and eosin (H&E; Sigma-Aldrich, USA) for general histology, toluidine blue stain (Sinopharm group, China) for estimating mast cells, and Wright’s-Giemsa stain (Abcam Cambridge, MA, USA; cat. no. ab245888) for estimating eosinophils. The stained sections were examined and photographed under a light microscope.

The nasal mucosal tissue sections were deparaffinized and rehydrated with graded series of ethanol. Then, antigen retrieval was performed. The sections were then blocked for 1h with 3% bovine serum albumin (BSA, Thermo Fisher Scientific; cat. no. 37520) followed by overnight incubation with anti-TGF-β primary antibody (cat. no. PAA124Gu01; USCN Life Science Incorporated, China) at 4° C in a humidified chamber. The sections were then incubated with a secondary antibody. The sections were then developed with diaminobenzidine, counterstained by hematoxylin, washed 3 times with PBS, and photographed under a light microscope. TGF-β expression was quantified using the Image Pro Plus 6.0 analysis system (Media Cybernetics, USA). Briefly, 10 digital images were captured at 1360×1024 pixel resolution and 400× magnification. Then, the size of TGF-β-positive area and the integrated optical density (IOD) in each area was evaluated. Finally, average optical density (AOD = IOD/Area) was calculated to determine TGF-β expression values for each sample.

Total RNA was extracted from nasal tissues using TRIzol reagent (cat. no. 15596018; Thermo Fisher Scientific, USA). CDNA synthesis was performed using total RNA (1μg) samples with the Verso cDNA Kit (Thermo Fisher Scientific, USA). Then, q-PCR was performed to quantify the relative expression levels of BPIFB2. The temperature conditions were as follows: 95° C for 3 min, followed by 40 cycles at 95° C for 10 sec, 58° C for 30 sec and 72° C for 30 sec. GAPDH was used as the internal control. The q-PCR primers were: BPIFB2-F: 5’-CAGCACCTGTTTGACTGTGC-3’; BPIFB2-R: 5’-GCTGCACCTTGAGTACCAGT-3’; GAPDH-F: 5’-TTCTACCCACGGCAAGTTCC-3’; GAPDH-R: 5’-CCAGCATCACCCCACTTGAT-3’. The relative expression of BPIFB2 was calculated using the 2-ΔΔCt method.

Flow cytometry assay was carried out as described by Ren et al. [40]. After incubation, cells were analyzed in a FACScalibur flow cytometer (BD Biosciences).

We performed paired-end RNA sequencing (RNA-seq) using 2 μg of total RNA from the nasal mucosal tissues. The quality and quantity of the RNA samples was determined using the Agilent 2100 bioanalyzer. The RNA sequencing library was prepared using the UltraTM RNA Library Prep Kit (NEB, USA) according to the manufacturer’s instructions and sequenced with the Illumina Hiseq 4000 machine. The sequencing reads were processed and aligned to the human genome assembly (hg19) using TopHat (version 2.0) and Bowtie2.

We obtained 2 mL of femoral artery blood from all guinea pigs after the last treatment and incubated them at room temperature for 30 min. The samples were then centrifuged at 3000 rpm for 10 min and obtained the supernatant. The supernatant was incubated with 500 μL methanol solution (80% methanol, 0.1% formic acid) at 4° C for 5 min, centrifuged at 3000 rpm for 10 min at 4° C, diluted with ultrapure water to obtain a final methanol concentration of 60%, and filtered through a 0.22 μm filter. The samples were analyzed by LC-HRMA/MS using a Dionex UltiMate 3000 chromatographic system (CTC Analytics AG, Switzerland) coupled to a TF Q-Exactive mass spectrometer equipped with a heated electrospray ionization (HESI)-II source.

All statistical data was expressed as means ± SD of three independent experiments. SPSS 13.0 software was used for statistical analyses. The differences between groups were estimated using one-way analysis of variance (ANOVA) followed by Dunnett’s test and LSD analysis of variance. All comparisons were made relative to the corresponding controls. P < 0.05 was considered statistically significant.