Copyright: © 2021 Liu and Zhang. This is an open access article distributed under the terms of the Creative Commons Attribution License (CC BY 3.0), which permits unrestricted use, distribution, and reproduction in any medium, provided the original author and source are credited.

Osteoarthritis (OA) is one of the most common joint diseases, characterized by degenerative changes in the articular cartilage that lead to aseptic inflammation [1]. The prevalence of OA increases with age and causative factors include environmental and lifestyle conditions, such as obesity and physical inactivity, joint wear and tear product of heavy physical work or activity, and trauma [2]. However, since the etiology and pathogenesis of OA are still unclear, treatment options for OA are still limited [3]. OA entails a large burden for public health systems and is associated with chronic pain and decreased life quality in those affected. Thus, discovery of novel therapies for the treatment of OA is of great importance.

Circular RNAs (circRNAs) comprise a class of non-coding RNAs (ncRNAs) with a closed circular structure that is widely represented in the eukaryotic transcriptome [4]. Different circRNAs play important functions in a wide variety of cells and contribute to various diseases by regulating gene expression at the post-transcriptional level [5]. Literature reports have shown that circRNAs are involved in the pathogenesis of OA [6, 7]. Zhou et al. suggested that circRNA 33186 is involved in the development of OA through sponging miR-127-5pECM to influence catabolism, proliferation, and apoptosis [6]. In turn, Wang et al. suggested a diagnostic value for hsa_circ_0032131_CBC1 in OA pathogenesis and identified hsa_circ_0134111 as a significantly upregulated ncRNA in OA tissues [7, 8]. In addition, Wu et al. reported that the importance of hsa_circ_0134111 in OA by regulating miR-515-5p [9].

In the current study, we explored the role of hsa_circ_0134111 in the occurrence and development of OA and unveiled its participation in a circRNA/miRNA/mRNA network involving hsa_circ_0134111/miR-224-5p/CCL1 in human chondrocytes. Interleukin-1β (IL-1β) is an important mediator of inflammatory response [10]. It is involved in a variety of cellular activities, including cell proliferation, differentiation, and apoptosis [11]. IL-1β is reported to be a key factor in inducing cartilage damage [12]. IL-1β acts on chondrocytes, interferes with the transformation of extracellular matrix, accelerates the degradation of chondrocyte matrix, and induces chondrocyte apoptosis [13]. Therefore, human primary chondrocytes were treated with IL-1β to mimic OA status in vitro. We hope that this study will further our understanding of the complex mechanisms governing OA progression and stimulate the search for new treatments. 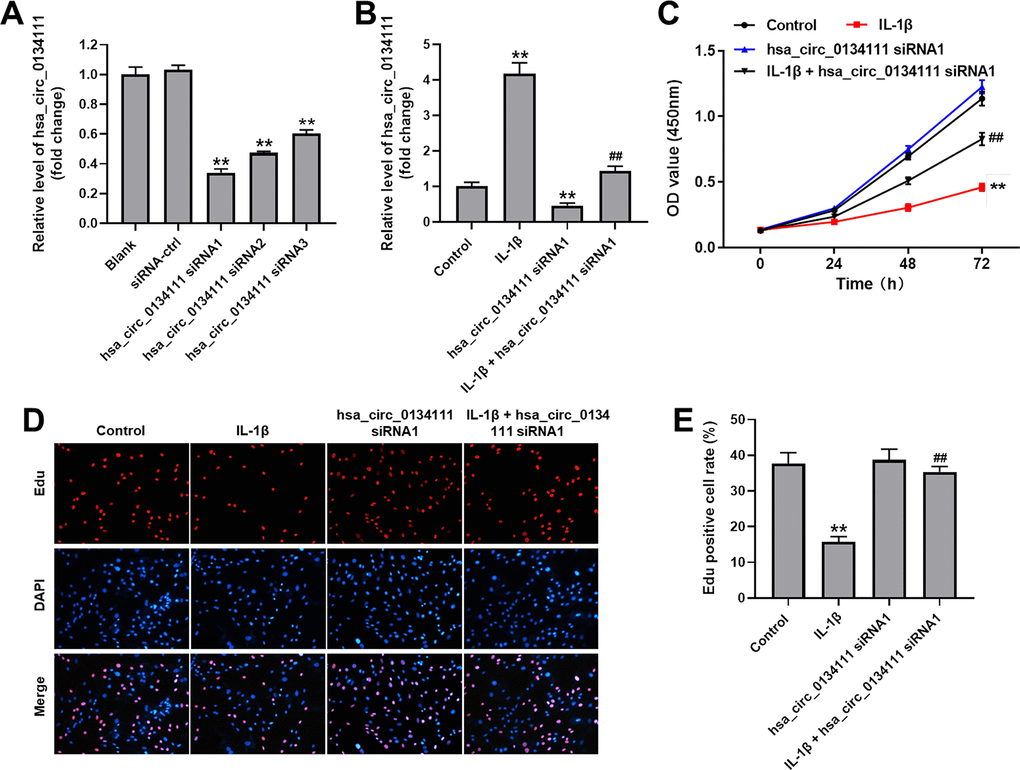 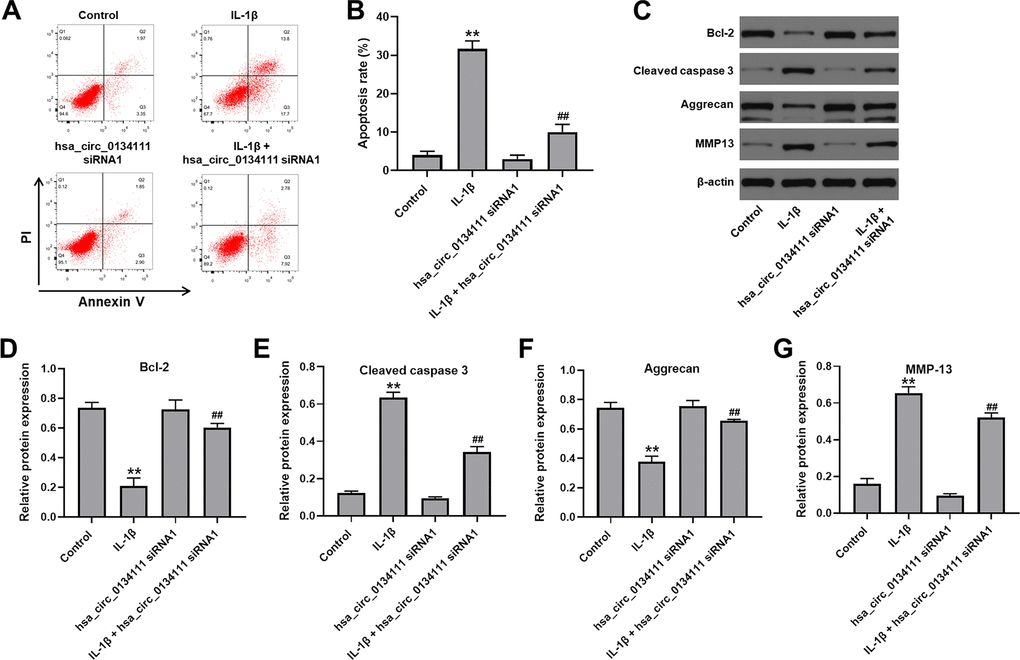 It has been reported that downregulation of aggrecan, the major proteoglycan in the articular cartilage, and upregulation of matrix metalloproteinase 13 (MMP13), a main cartilage-degrading enzyme, are important events in the early stage of OA [14–18]. Western blotting showed that IL-1β significantly decreased the expression of aggrecan and increased the expression of MMP13 in cultured chondrocytes. Notably, these phenomena were largely prevented after transduction of hsa_circ_0134111 siRNA1 (Figure 2C, 2F, 2G). These data suggest that hsa_circ_0134111 expression in chondrocytes contributes to both apoptosis and proteoglycan degradation under simulated OA conditions. 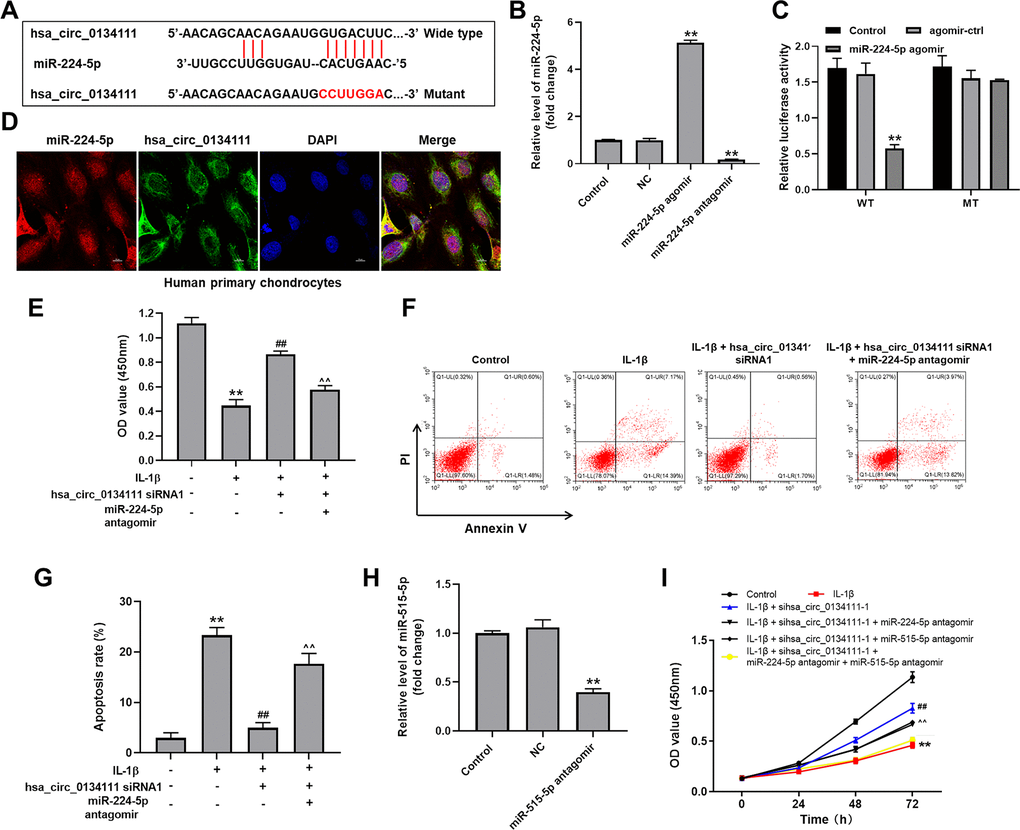 To identify putative target genes of miR-224-5p, three online bioinformatics databases (TargetScan, miRDB, and miRWalk) were accessed. Among the genes retrieved, we selected chemokine ligand 1 (CCL1) based on its reported role in OA progression [21] (Figure 4A). Suggesting that miR-224-5p binds specifically to CCL1, dual luciferase assays in cultured chondrocytes demonstrated effective inhibition of the activity of the CCL1 reporter containing a WT, but not a control MT, 3’-UTR upon expression of miR-224-5p agomir (Figure 4B). This finding was further supported by RT-qPCR data, which showed that transfection with miR-224-5p agomir significantly decreased the expression of CCL1 (Figure 4C). In addition, western blot assays showed that miR-224-5p agomir significantly decreased the expression of CCL1, compared with the control group (Figure 4D, 4E). These results indicate that CCL1 is negatively regulated by direct binding of miR-224-5p. 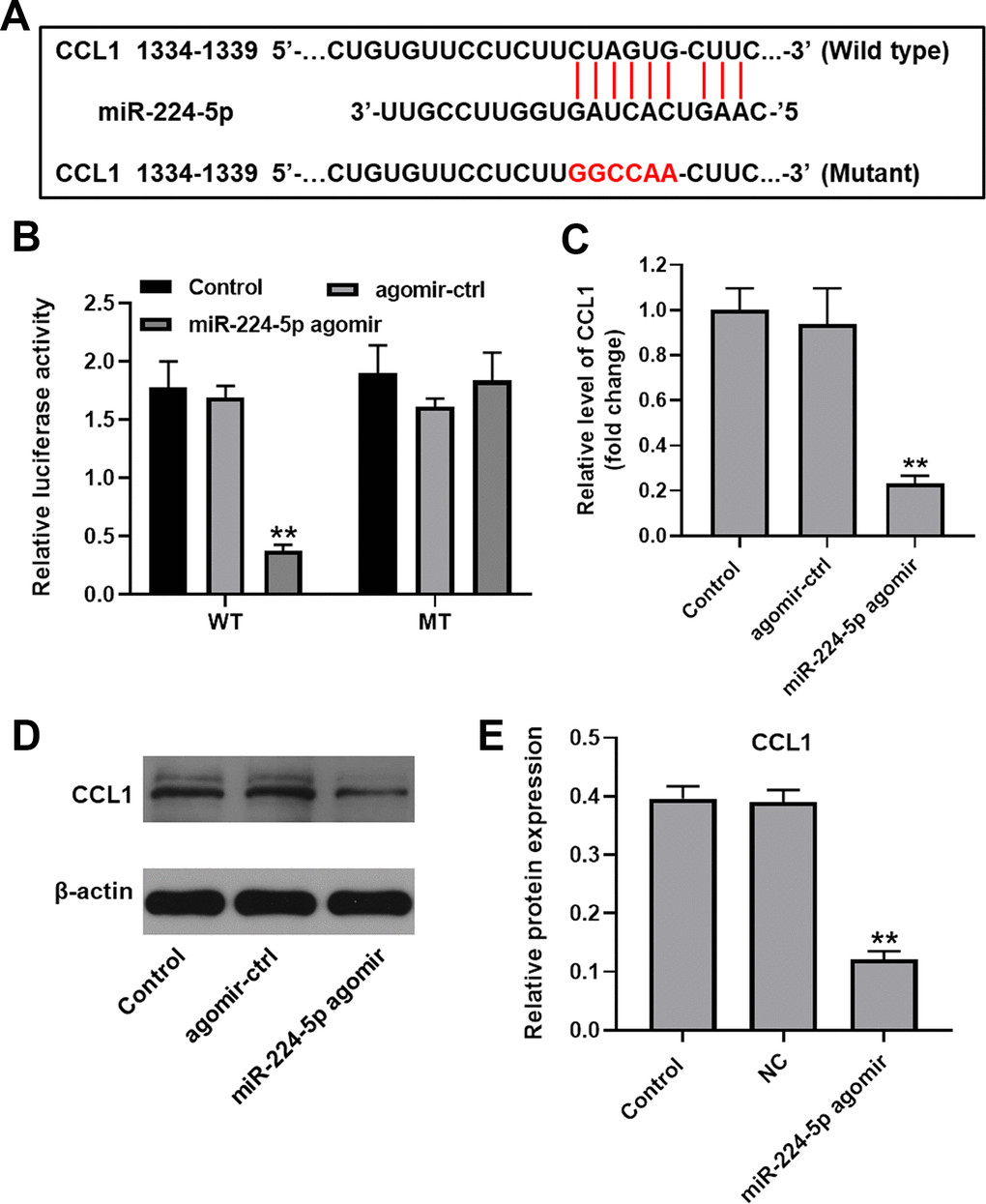 Figure 4. CCL1 is targeted and negatively regulated by miR-224-5p. (A) Diagram showing binding sites for miR-224-5p in the CCL1 mRNA and nucleotide sequence of the mutant CCL1 3’-UTR. (B) A dual-luciferase reporter assay was used to confirm the binding of CCL1 to miR-224-5p. (C) Chondrocytes were treated with miR-224-5p agomir-ctrl or miR-224-5p agomir and RT-qPCR was performed to measure CCL1 levels in cells. (D, E) Western blot was used to detect the level of CCL1. **P<0.01, compared with control. 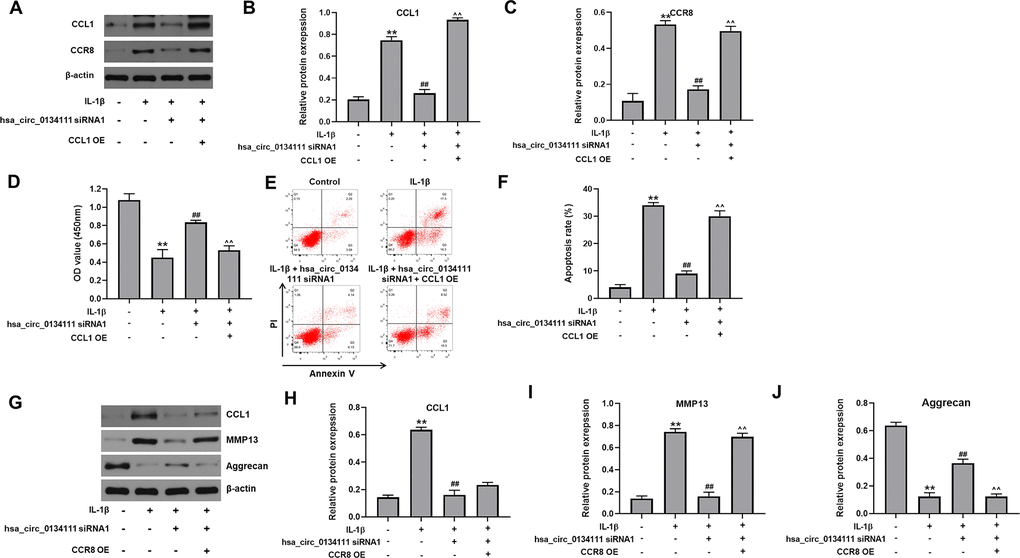 The present study highlights a novel mechanism by which hsa_circ_0134111 potentially regulates the occurrence and development of OA. We found that IL-1β, a pro-inflammatory cytokine that acts as the main driver of cartilage degradation during OA [22], markedly increased the expression of hsa_circ_0134111 in human chondrocytes. Knockdown of hsa_circ_0134111 in these cells significantly attenuated IL-1β-induced growth inhibition and apoptosis, which is consistent with the observed reversal of the downregulation of Bcl-2 and the upregulation of cleaved caspase 3 induced by IL-1β.

Several studies suggested that circRNAs play an important role in the development of OA [4, 5]. Huang et al. showed that circRNA_0092516 impairs proliferation and promotes apoptosis in IL-1β-stimulated chondrocytes by regulating the miR-337-3p/PTEN axis [4]. Zhu et al. reported that silencing of circGCN1L1 (hsa_circ_0000448) alleviates the symptoms of OA by regulating miR-330-3p and the TNF-α gene in synoviocytes [5]. Consistent with role of hsa_circ_0134111 demonstrated in our study, Zhou et al. found that IL-1β significantly increased the expression of circRNA.33186 in chondrocytes, and its silencing alleviated IL-1β-induced apoptosis [6].

Accumulating evidence shows that aggrecan downregulation and MMP13 upregulation are important events in the early stage of OA [14–18]. After joint fracture, increments is the expression of MMPs and in the degradation of aggrecan are observed [16]. It has been reported that hsa_circ_0005105 can inhibit the expression of aggrecan and promote the expression of MMP-13 by sponging miR-26a [23]. Similarly, we showed that IL-1β decreases aggrecan synthesis and augments MMP13 production in chondrocytes, two phenomena that were largely attenuated by hsa_circ_0134111 knockdown.

Dysregulated expression of miR-224-5p [19] and CCL1 [24, 25] has been implicated in the development of OA. Using luciferase reporter assays, we showed that miR-224-5p directly targets both hsa_circ_0134111 and CCL1, thus defining a competing endogenous RNA (ceRNA) regulatory network operational in chondrocytes and potentially involved in the development of OA. In such regard, our data would suggest that joint inflammation triggers hsa_circ_0134111 expression in chondrocytes, which sponges miR-224-5p to allow translation of its target gene CCL1, thus promoting OA. This mechanism is supported by the fact that CCL1 overexpression abrogated the pro-survival effect of hsa_circ_0134111 in IL-1β-treated chondrocytes. Nevertheless, further research is needed to clarify the specific role of CCL1 in chondrocyte inflammation and apoptosis in the setting of OA.

Moreover, Wu et al. reported that hsa_circ_0134111 was overexpressed in IL-1β-induced chondrocytes [9]. Our results are consistent with this. In addition, we examined hsa_circ_0134111 mediates the OA progression by modulating miR-224-5p and multiple miRNA pathways in a synergistic way.

Lastly, our in vivo experiments in a rat model of OA demonstrated that hsa_circ_0134111 inhibition attenuated articular damage and reduced IL-6 and TNF-α levels in synovial fluid from affected joints. These findings suggest that knockdown of hsa_circ_0134111 alleviates the progression of OA in vitro and in vivo by regulating the miR-224-5p/CCL1 axis. Hsa_circ_0134111 might thus represent a new target for the treatment of OA.

The viability of chondrocytes was assessed through the CCK-8 assay. Chondrocytes (5×103 per well) were cultured in 96-well plates. After experimental treatments, 10 μl of CCK-8 reagent (Beyotime, Shanghai, China) was added to each well for 2 h at 37° C. Optical density was obtained at 450 nm with a microplate reader (Bio-Rad, Hercules, CA, USA).

The proliferation of chondrocytes was detected by EdU (5-ethynyl-2’-deoxyuridine) staining using an EdU Detection kit (RiboBio Biology, Guangzhou, China). Chondrocytes were incubated at 37° C with 50 μM EdU for 2 h followed by staining with the Apollo reaction cocktail for 30 min at 37° C in the dark. A fluorescence microscope (Olympus, Tokyo, Japan) was used to analyze EdU uptake.

In vivo model of OA

A total of 15 female wistar rats (12-week-old) were purchased from the Animal Center of the Chinese Academy of Sciences (Shanghai, China). All animal procedures adhered to the recommendations of the Guide for the Care and Use of Laboratory Animals (National Institutes of Health, USA) [27]. Three experimental groups (n = 6 rats per group) were defined: 1) OA; 2) OA plus hsa_circ_0134111 siRNA1; and 3) Control (sham surgery). To establish an OA model in vivo, rats were anesthetized by intraperitoneal injection of 2% pentobarbital (40 mg/kg) and then the joint capsule of the right knee was incised medial to the patellar tendon. The medial meniscotibial ligament was then transected using microsurgical scissors as previously described [28]. Control rats received a sham procedure consisting of temporarily exposing the joint capsule of the knee, without further tissue manipulation. Twenty-four hours after surgery, rats in the OA + hsa_circ_0134111 siRNA1 group were injected with hsa_circ_0134111 siRNA1 (50 nm) into the right joint cavity twice a week. OA rats were received in turn saline injections. Eight weeks after surgery, the animals were sacrificed with CO2 and knee joint tissues collected for downstream analyses.

FISH experiment was performed to detect the co-localization of hsa_circ_0134111 and miR-224-5p in human primary chondrocytes. FITC-labeled miR-224-5p and Cy3-labeled hsa_circ_0134111 probes was provided by Biosense (Guangzhou, China). Fluorescent In Situ Hybridization Kit was used to hybridize. DAPI is used to stain the nucleus for 20 min. Finally, images were analyzed using a fluorescence microscope.

Safranin O and Fast Green staining was used for histological examination of joint tissue specimens. Morphological changes of cartilage and subchondral bone were assessed by observers blind to experimental treatment. The conditions of the medial femoral condyle and the medial tibial plateau were assessed using a synovitis scoring system [29]. Cartilage damage was further assessed by H&E staining.

Osteoarticular tissues were fixed with 4% paraformaldehyde in PBS overnight, embedded in paraffin, and sliced into 5-μm-thick sections. Following deparaffinization and hydration, anti-CCL1 (1:1000; Cat. ab280356) and anti-CCR8 (1:1000; Cat. ab32399) antibodies were applied to the samples overnight at 4° C. DAB (3,3’-diaminobenzidine) was used to detect immunostaining. All the antibodies were purchased from Abcam (Cambridge, MA, USA).

The datasets used and/or analyzed during the current study are available from the corresponding author on reasonable request.

The authors declare that no conflicts of interest exist regarding this research.

The study was funded by First People’s Hospital of Lianyungang City.