Human glioma has emerged as one of the most common intracranial malignancies in recent decades, accounting for roughly 45% of all brain tumors [1–3]. It is estimated that approximately 15,000 cancer-related deaths were attributed to glioma annually in United States [4–6]. In spite of the fact that great advances regarding the standardized therapies have been made for glioma patients, the long-term prognosis of malignant glioma patients is still pretty frustrating [7–9]. Thus, there is an urgent need to better understand the exact mechanisms underlying glioma development, which could facilitate to develop effective treatment strategies and improve the prognosis for glioma patients.

It is well documented that Forkhead box N3 (FOXN3) belongs to the FOX family of transcriptional factors, which are implicated in a great variety of biological activities, including cell survival, cell proliferation and cell migration as well as cell invasion [10–12]. Recent studies have uncovered that FOXN3 functions as a key player in multiple kinds of malignant tumors, such as papillary thyroid cancer [13], tongue squamous cell carcinoma [14], melanoma [15] and breast cancer [16]. Nevertheless, potential biological functions of FOXN3 in human glioma remain largely unclear.

The current study aimed to explore potential biological functions of FOXN3 in human glioma and clarify possible molecular mechanism. Herein, it was found that FOXN3 was markedly under-expressed in glioma tissue samples and glioma cell lines. Furthermore, gain of function and loss of function researches were applied to explore effects of FOXN3 on the proliferation, colony formation and motility capabilities of glioma cells. In addition, the involvement of AKT/murine double minute 2 (MDM2)/p53 axis was also assessed. Taken together, the present study offers novel insights into elucidating biological functions of FOXN3 in glioma.

Sixty-three glioma patients who received surgical operation were recruited in Taihe Affiliated Hospital of Hubei University of Medicine (Shiyan, China) from February 2013 to December 2018. Tumor tissue samples were obtained from patients with glioma. Normal non-tumorous brain tissue samples were collected from sixty-three volunteers who suffered from traffic accidents. Written informed consents were gathered from all the participants prior to their enrollment in this study. The fresh clinical tissue specimens were immediately placed in an ultra-low temperature freezer (–80°C) for subsequent studies. The present study gained approval from Ethics Committee of Taihe Affiliated Hospital of Hubei University of Medicine (IRB approval No. 2012090058).

MTT Cell Proliferation Assay Kit (Invitrogen) was applied to evaluate cell proliferation ability. MTT assays were performed based on manufacturer’s protocols. Briefly, 20 μl of MTT solution was placed into the 96-well plates and was then cultured for 4 hours at 37°C. Afterwards, 150 μl of DMSO solutions was added into the 96-well plates after discarding the supernatants. Finally, a Spectramax M5 spectrophotometer was used to detect the absorbance at 490 nm. All experiments were conducted in triplicates.

Clonogenic capability of tumor cell was assessed through colony formation assays. Briefly, tumor cells were placed into the six-well plates at the concentration of 1 × 103 cells per well and were incubated for two weeks. Fifteen minutes’ incubation with 10% formaldehyde was used to fix the forming colonies, followed by 0.1% crystal violet staining. In the end, the stained colonies were observed and were counted via an inverted microscope. Clonogenic ability was evaluated by triplicate experiments.

Tumor cell apoptosis was analyzed using FITC-Annexin V/PI Apoptosis Detection Kit according to manufacturer’s guidelines. Briefly, collected cells were resuspended in the binding buffer (0.5 ml) after being washed twice by cold PBS. The cells were maintained in the dark for 15 minutes at room temperature followed by addition of 5 Annexin V-FITC solution (5 μl) and PI solution (5 μl). Finally, flow cytometry was applied to detect the apoptotic cells. All the experiments were conducted in triplicates.

The scratch wound healing assays were used to determine the Migration ability of tumor cells were determined by wound healing assays. Briefly, about 1000 cells per well were seeded into the 6-well plates. The cells were scratched using a sterile 200 μl pipette tip when reaching a confluence of 100% and were incubated in the culture medium for 24 hours. Subsequently, the wound closure was observed under a microscope. Migration abilities of tumor cells were assessed via triplicate experiments.

Invasive ability of tumor cells was examined by Transwell invasion method. In brief, about 2 × 104 cells were placed into the upper chamber which contained fetal bovine serum-free culture medium. Matrigel (BD Bioscience, San Jose, CA, USA) was applied to coat the upper chamber which was filled with DMEM culture with 10% fetal bovine serum. Cells were then incubated for twenty-four hours at 37°C. Subsequently, the invading cells were fixed using paraformaldehyde (4%) and were visualized using crystal violet. Finally, the stained cells were observed and were photographed. Invasion capabilities of cells were analyzed through triplicate experiments.

Animal experiment was carried out in Taihe Affiliated Hospital of Hubei University of Medicine. Animal experiment gained approval from the Animal Care and Use Committee of Taihe Affiliated Hospital of Hubei University of Medicine (IACUC approval No. 2019120746). Ten BALB/c nude mice (male) were obtained from Beijing HFK Bioscience Co. Ltd (Beijing, China) and were classified into 2 groups (n = 5). Tumor xenograft models were constructed via inoculation of empty vector or FOXN3 expression vector-treated U87MG cells (1 × 106 cells per mouse) into the flanks of nude mice. Volumes of formed tumors was determined every seven days based on the calculation formula that tumor seize (mm3) = 0.5 × width2 (mm2) × length (mm). All the mice were anesthetized via isoflurane inhalation and were sacrificed via cervical dislocation at day 28 post-transplantation. Then the tumors were peeled and weighed.

Immunohistochemical staining was carried out as previously described. Briefly, 4 μm-thick paraffin-embedded tissue sections were subjected to deparaffinization and rehydration, followed by antigen retrieval. Subsequently, endogenous peroxide activity was quenched via incubating tissue slices with 3% H2O2. Non-specific binding was blocked through incubation of bovine serum albumin. Primary antibodies (anti-Ki67, anti-cleaved caspase 3 and anti-Vimentin) were then incubated with tissue sections at 4°C overnight, followed by one hour’s incubation with horseradish peroxide (HRP)-labeled secondary antibody. The slides were visualized via diaminobenzidine (DAB) staining. The positive staining in the tissue slices was were photographed and analyzed.

SPSS v20.0 was used to conduct data analysis. Results were presented as mean ± standard deviation. The student’s t-test was used to analyze the differences between two groups. One-way ANOVA and Dunnett’s post-hoc comparison were performed to evaluate differences among three or more groups. Kaplan-Meier survival curve was adopted to determine the link between FOXN3 expression and overall survival time of glioma patients. A P-value of less than 0.05 indicated significantly different.

In order to explore the role of FOXN3 in human glioma, qPCR analysis was performed to characterize its expression patterns in glioma tissues and healthy brain tissues. As shown in Figure 1A, FOXN3 mRNA expression were significantly decreased in the glioma tissues in comparison with normal brain tissues (P < 0.01). In consistence with the findings about FOXN3 mRNA expression, Western blotting analysis showed that FOXN3 protein was notably under-expressed in glioma tissues in comparison with normal brain tissues (Figure 1B, P < 0.01). Besides, Kaplan-Meier survival curve was adopted to analyze the link between FOXN3 mRNA expression and overall survival time of glioma patients. Kaplan-Meier survival curve manifested that glioma patients with low FOXN3 expression (n = 32) exhibited a shorter overall survival time than those with high FOXN3 expression (n = 31; Figure 1C, P < 0.05). Collectively, these results suggest that decreased FOXN3 expression correlates with glioma patients’ poor prognosis. 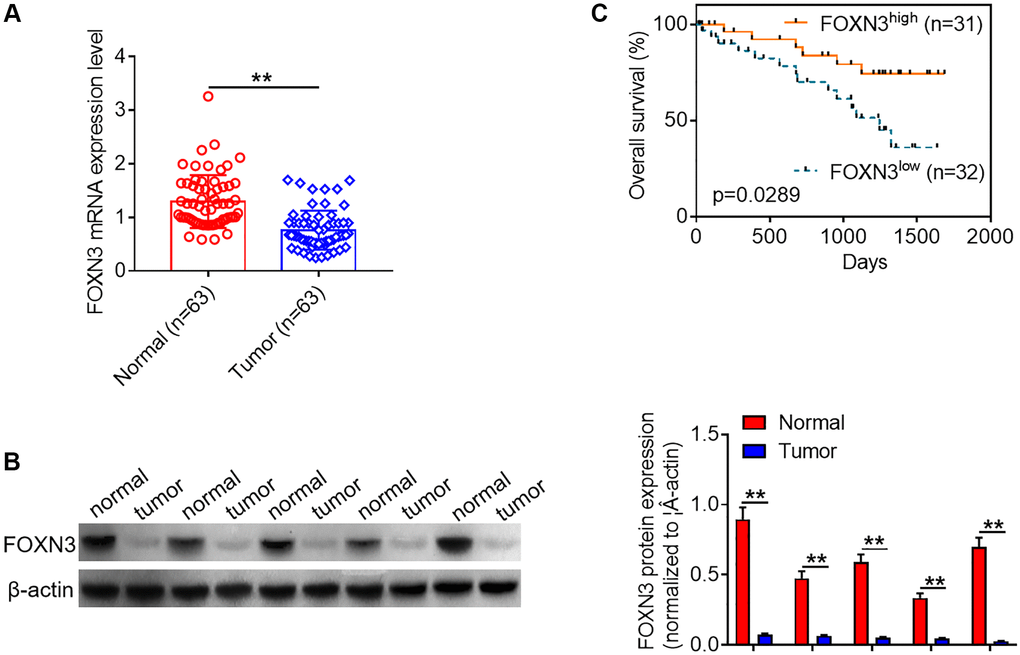 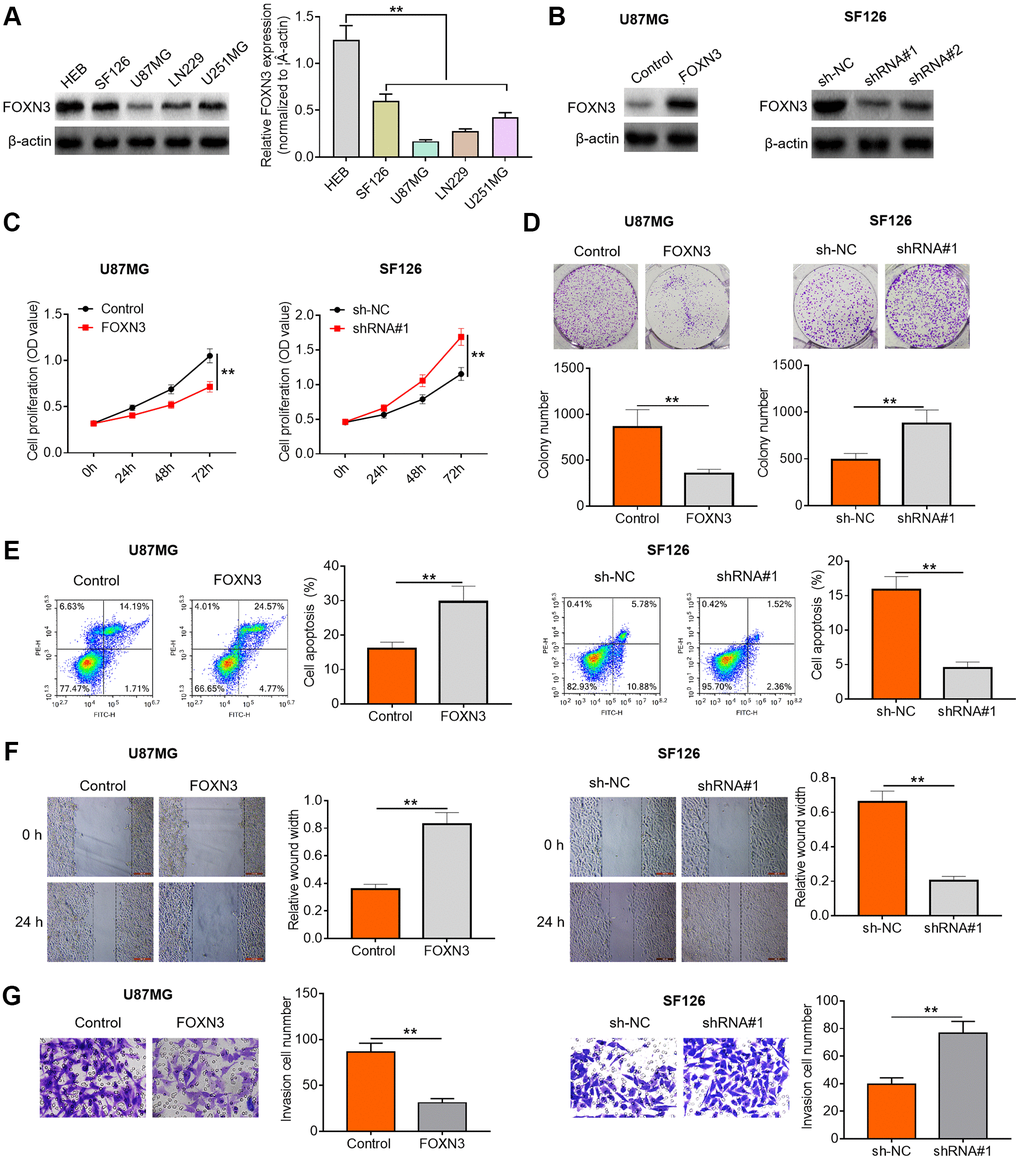 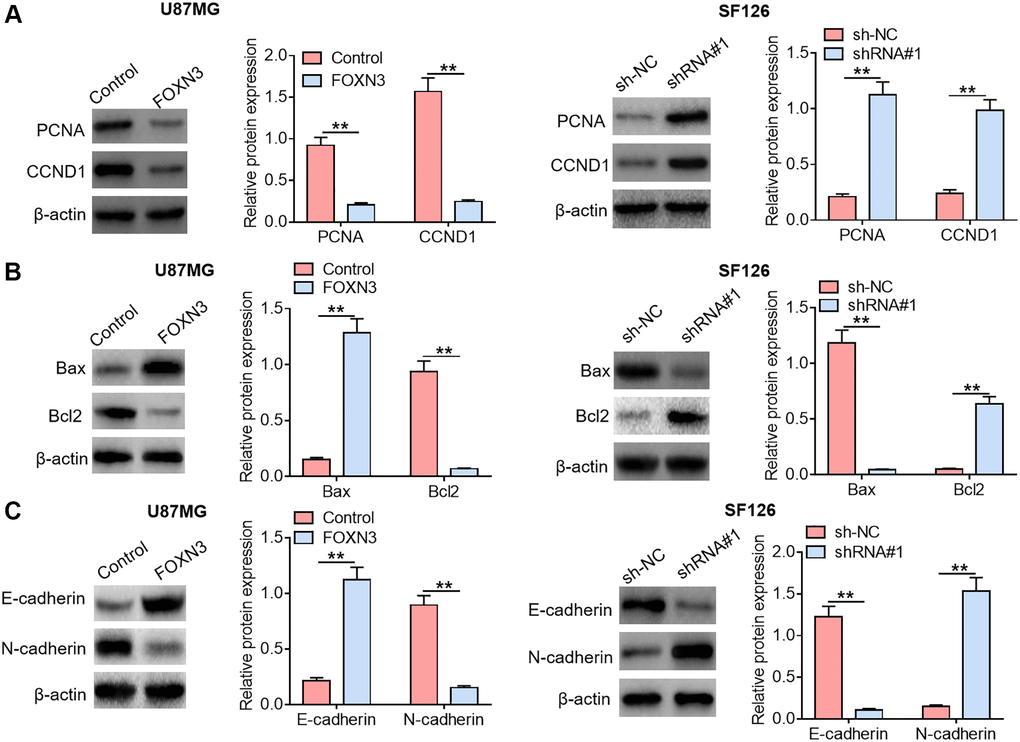 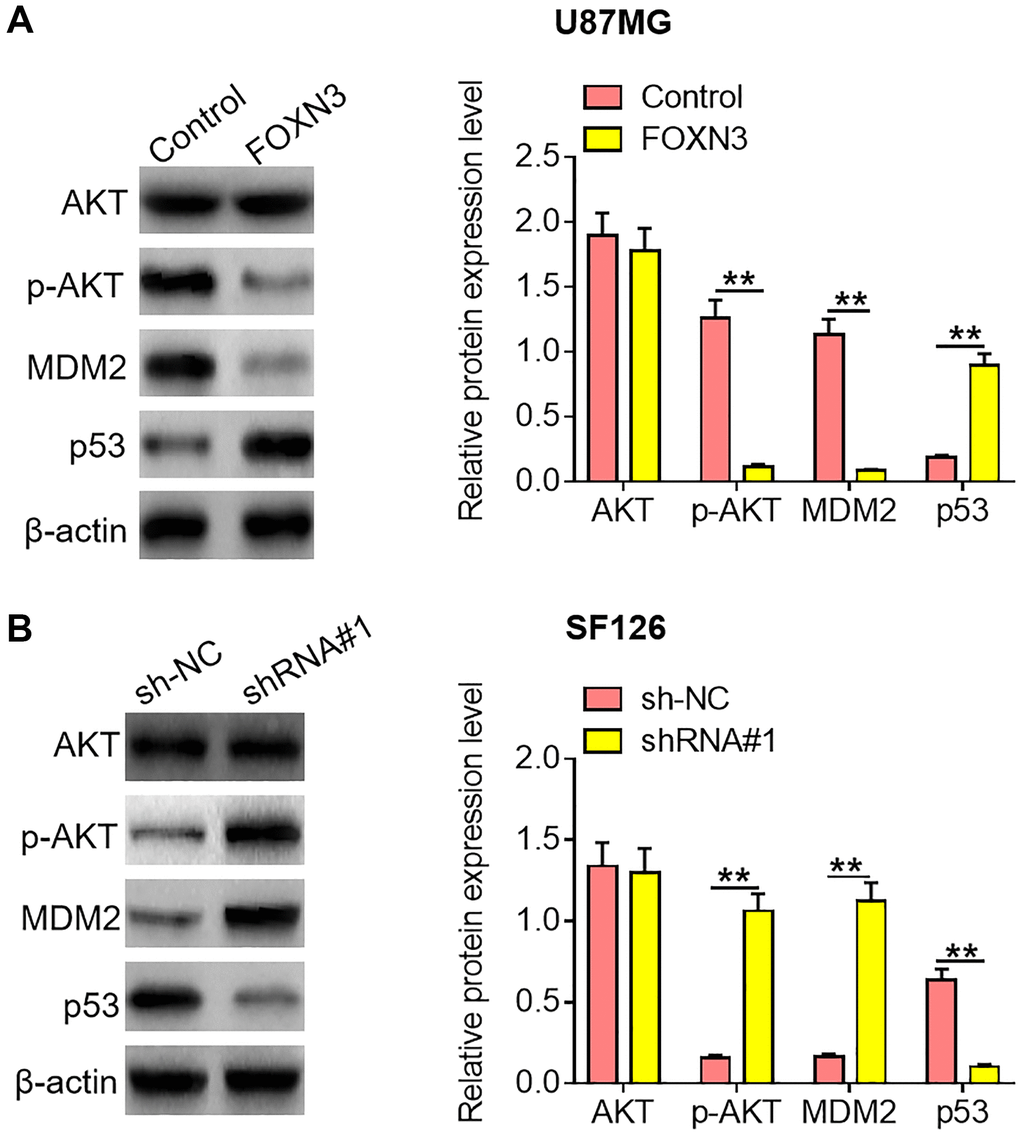 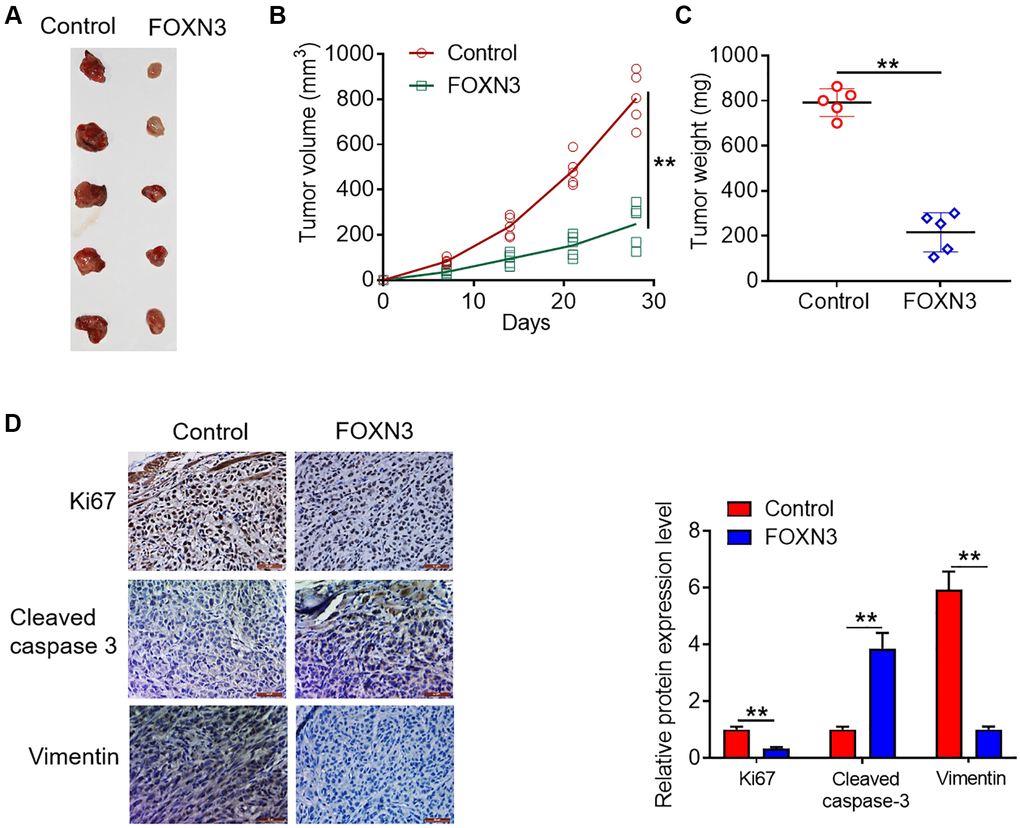 It is widely accepted that glioma has aroused widespread public concerns around the world due to its high morbidity and mortality in recent decades [17–19]. It is worth noting that glioma has already imposed huge economic burdens and heath pressures on the glioma patients worldwide. Even though some significant achievements concerning the diagnosis and therapy have been gained, the overall survival of most glioma patients remains very depressing. Therefore, there is an urgent need to broaden our knowledge concerning the underlying mechanisms of glioma occurrence and progression, which would facilitate to develop promising and effective treatment alternatives. Mounting reports have manifested that the aberrant expression of tumor-related crucial genes is closely linked to the malignant progression of glioma [20–22].

In the previous studies, FOXN3 has been proved as a key player during the malignant development of varied kinds of malignant tumors. Xue et al. determined the expression pattern of FOXN3 in osteosarcoma and demonstrated that decreased FOXN3 expression repressed tumor cell invasion and migration through transcriptionally regulating SIRT6 [10]. He and his research team reported a notable decrease in FOXN3 expression in adult acute myeloid leukemia and their data revealed that FOXN3 exerted tumor-suppressing roles by inhibiting cell proliferation and promoting apoptosis [11]. Zhao et al. reported that decreased FOXN3 expression was observed in papillary thyroid cancer and discovered that FOXN3 inhibited tumor cell growth and invasion via the inactivation of Wnt/ β-catenin pathway [13]. Moreover, researches by Chen et al. [14] and Sun et al. [15] manifested that FOXN3 repressed tumor cell proliferation and epithelial-to-mesenchymal transition as well as metastasis in melanoma and tongue squamous cell carcinoma. Nonetheless, the biological role of FOXN3 remains poorly understood.

In the current study, FOXN3 expression patterns in glioma tissues were characterized via qPCR analysis and Western blotting. Herein, it was found that FOXN3 was notably under-expressed in the tumorous tissues and that reduced FOXN3 expression correlated with short overall survival time of patients with glioma. Moreover, gain of function and loss of function studies showed that up-regulation of FOXN3 notably inhibited glioma cell proliferation, survival and motility, while down-regulation of FOXN3 dramatically facilitated glioma cell proliferation, survival and invasion. In addition, our findings demonstrated that FOXN3 over-expression triggered an obvious reduction in PCNA, CCND1, MMP9 and Vimentin expression levels in glioma cells, whereas FOXN3 ablation elicited a remarkable elevation in PCNA, CCND1, MMP9 and Vimentin expression levels. It is well documented that decreased PCNA and CCND1 expression is associated with retarded proliferation of tumor cells [23–25] and that reduced MMP9 and Vimentin expression is closely related to slowed invasion of cancer cells [26, 27].

With the purpose of illuminating the potential molecular mechanisms underlying the biological functions of FOXN3 in glioma, further mechanistic studies were performed. Past researches have confirmed that the abnormal activation of the AKT/MDM2/p53 signaling axis is implicated in several types of human malignant neoplasms [28–30]. In the present research, we assessed the effects of FOXN3 on AKT/MDM2/p53 signaling axis in glioma cells. Herein, it was observed that FOXN3 over-expression repressed AKT/MDM2/p53 signaling transduction in glioma cells, whereas FOXN3 ablation facilitated the activation of AKT/MDM2/p53 signaling axis. It is widely acknowledged that AKT phosphorylation could facilitate the stabilization and nuclear translocation of the transcription factor MDM2, thereby triggering subsequent ubiquitination and degradation of the tumor suppressor factor p53 [31–33]. It is worthwhile to note that the inactivation of AKT/MDM2/p53 is regarded as a promising treatment option against human malignancies [34, 35]. In addition, in vivo xenograft assays demonstrated that FOXN3 over-expression could restrain tumor growth in the nude mice models.

To sum up, our findings for the first time demonstrated that FOXN3 was markedly under-expressed in human glioma and that reduced FOXN3 expression was linked to short overall survival time of patients with glioma. Moreover, functional and mechanistic researches preliminarily revealed that FOXN3 suppressed proliferation, survival and invasion of glioma cells through inactivating the AKT/MDM2/p53 axis. Hence, the present study may offer some valuable clues for clarifying the possible molecular mechanisms underlying glioma development and progression.

The current study was supported by Hygiene and Health Program of Hubei Province (Grant No. WJ2019F055).