Copyright © 2020 Tian et al. This is an open-access article distributed under the terms of the Creative Commons Attribution License (CC BY 3.0), which permits unrestricted use, distribution, and reproduction in any medium, provided the original author and source are credited.

Gastric cancer (GC) is the third most common cause of cancer-related deaths in the world, and the most common gastrointestinal malignancy in China [1–3]. Despite great advances in surgery and adjuvant treatments, the 5-year survival rate of GC patients is poor because of cancer recurrence due to metastases [4]. Hence, elucidating the molecular mechanisms involved in GC metastasis is necessary to improve survival outcomes [5].

Metastasis is a complex process that involves epithelial-mesenchymal transition (EMT) of gastric cancer cells, in which cancer cells acquire mesenchymal properties that enable them to access the blood stream and invade other organs of the human body [6–9]. EMT involves cellular reprogramming through changes in gene transcription [10]. Hence, understanding the molecular mechanisms underlying EMT is required to identify newer strategies to treat GC.

The Serpin Family H Member 1 (SERPINH1) gene encodes a protein called HSP47, which is required for the correct folding and secretion of collagen [11]. SERPINH1 is aberrantly expressed in cervical cancer [12], breast cancer [13], glioblastoma [14] and colorectal cancer [15]. SERPINH1 promotes invasion and metastasis of breast cancer cells by regulating the expression of several extracellular matrix (ECM) proteins [13]. In our present work, gene enrichment analysis shows that genes co-expressed with SERPINH1 in GC are mainly involved in the EMT pathway. Besides, Wnt/β-catenin signaling pathway regulates EMT in gastric cancer [16]. However, it is not clear if SERPINH1 regulates EMT via Wnt/β-catenin pathway in GC is not clear.

In this study, we investigated the prognostic significance of SERPINH1 by analyzing GC patient tissues. Furthermore, we analyzed the relationship between SERPINH1, EMT and Wnt/β-catenin pathway using SERPINH1 knockdown and overexpressing GC cell lines. Finally, we analyzed the anti-tumor effects of Col003, a small molecule inhibitor of the SERPINH1 protein. 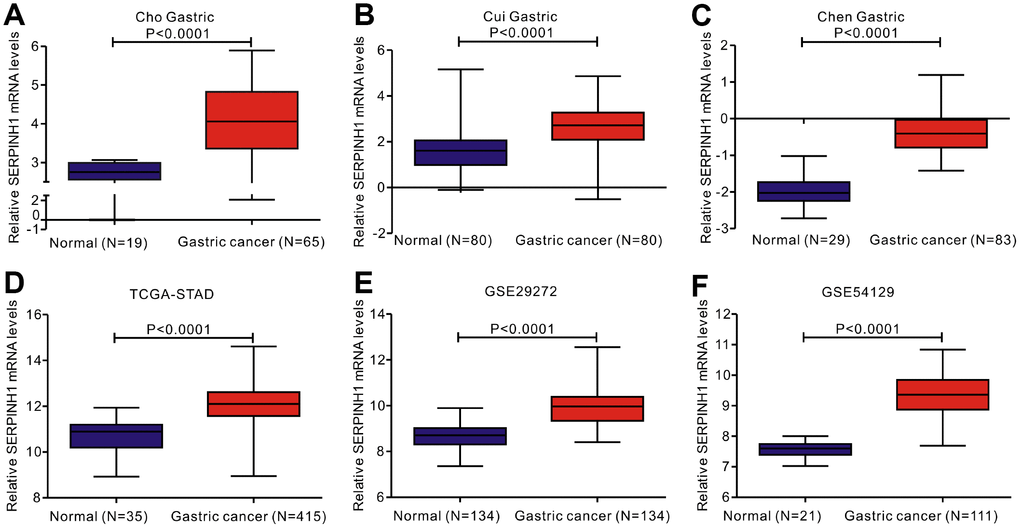 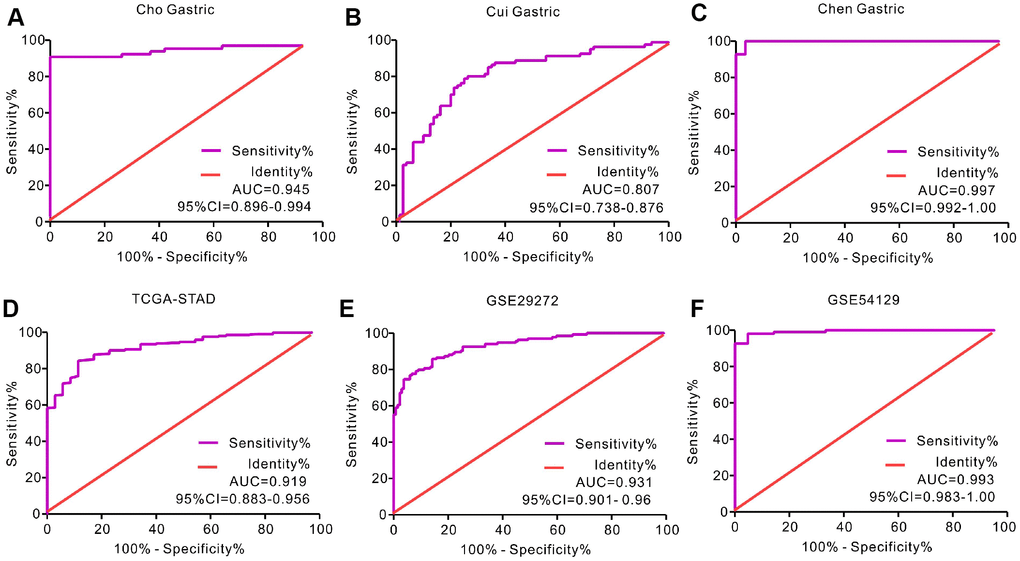 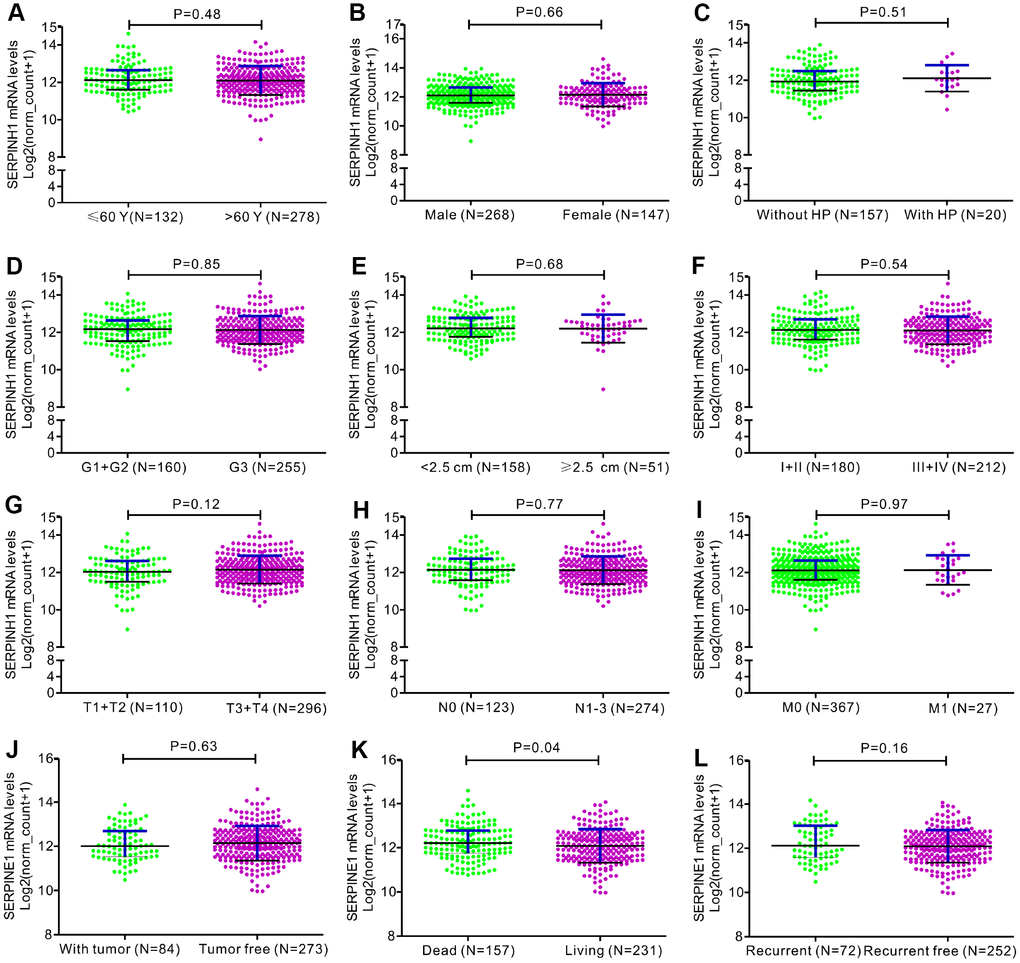 Table 1. The diagnostic value of SERPINH1 mRNA for GC from six datasets. 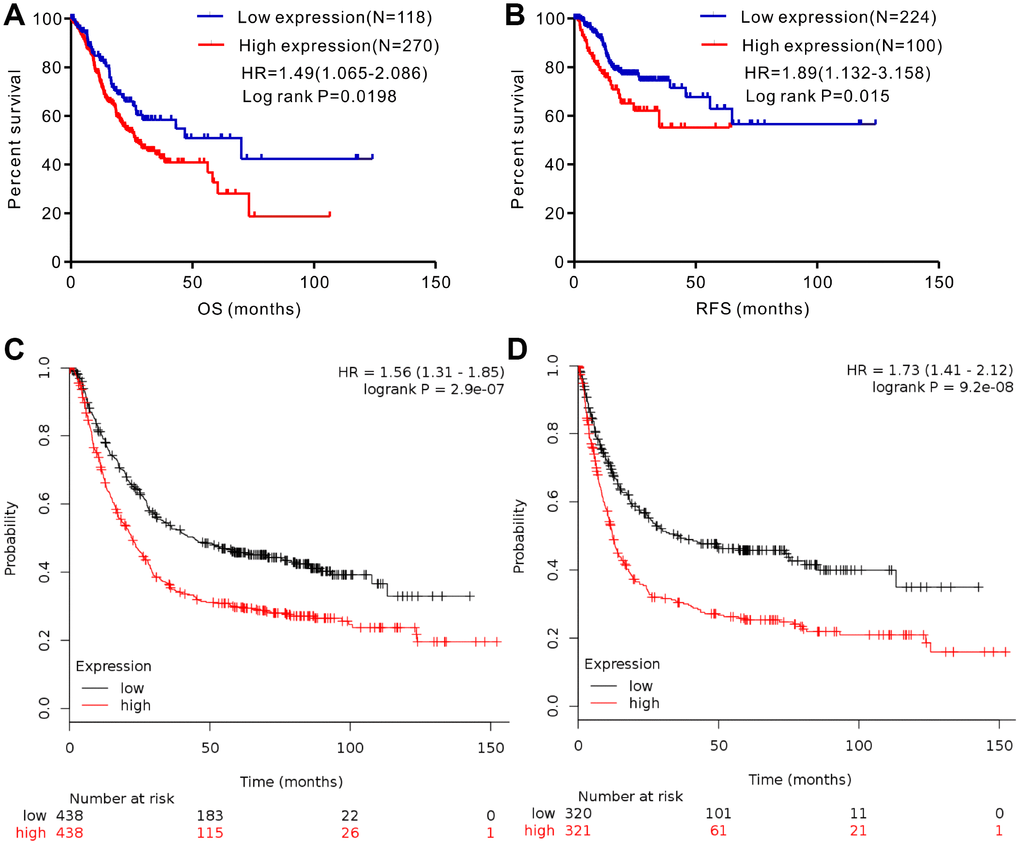 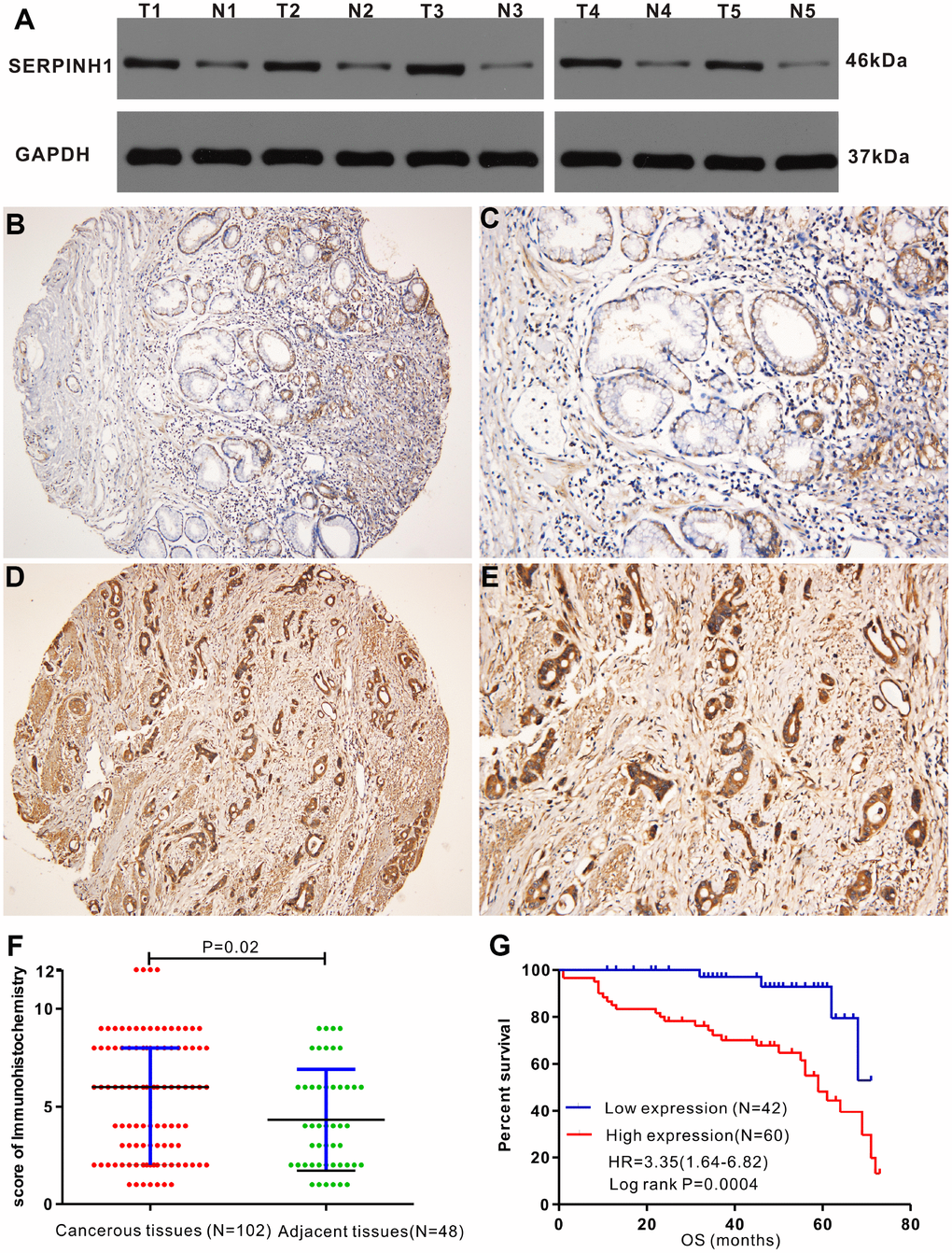 Table 3. Univariate and multivariate Cox analyses of OS in 102 patients with GC. 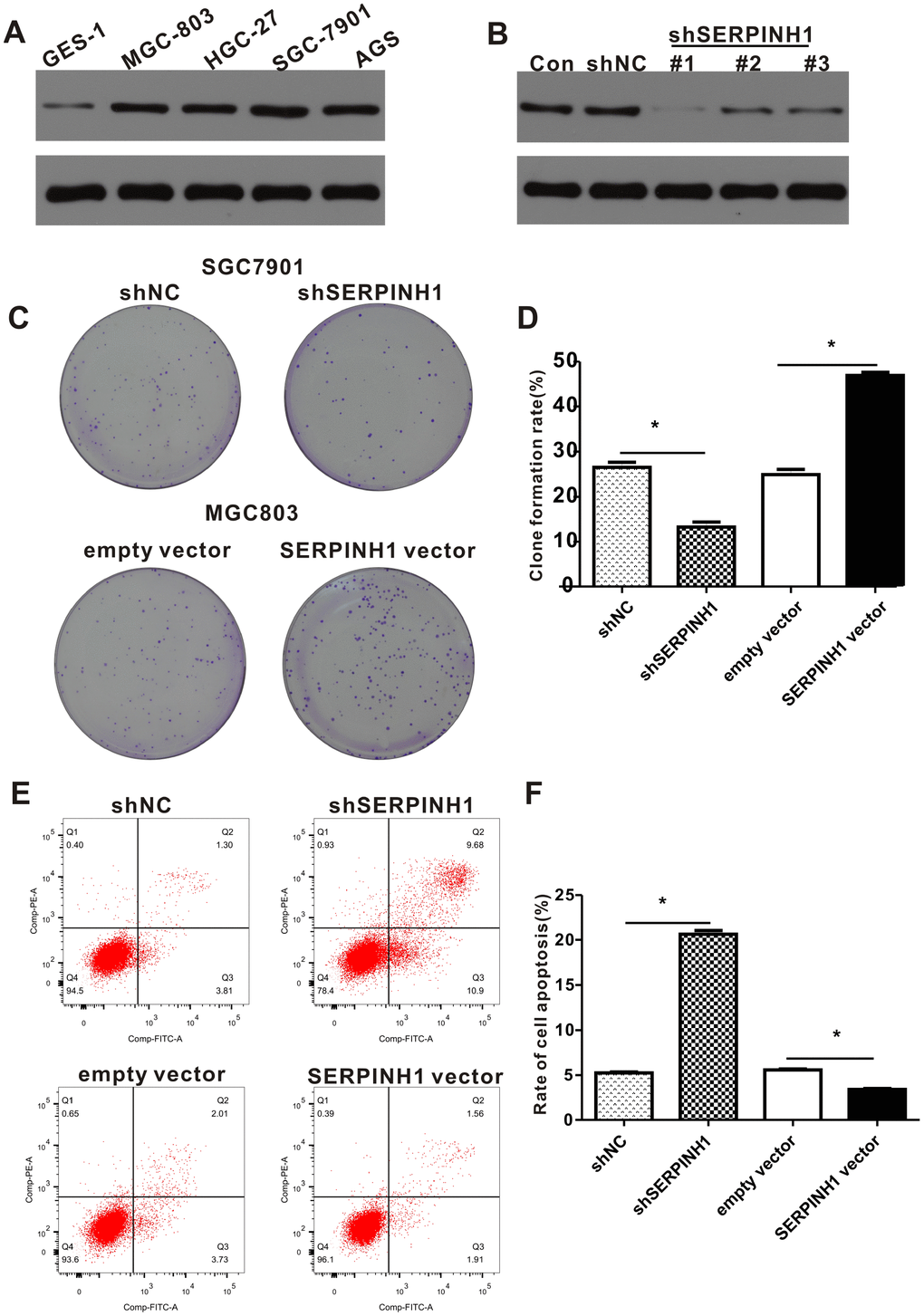 SERPINH1 regulates the migration and invasion of GC cells 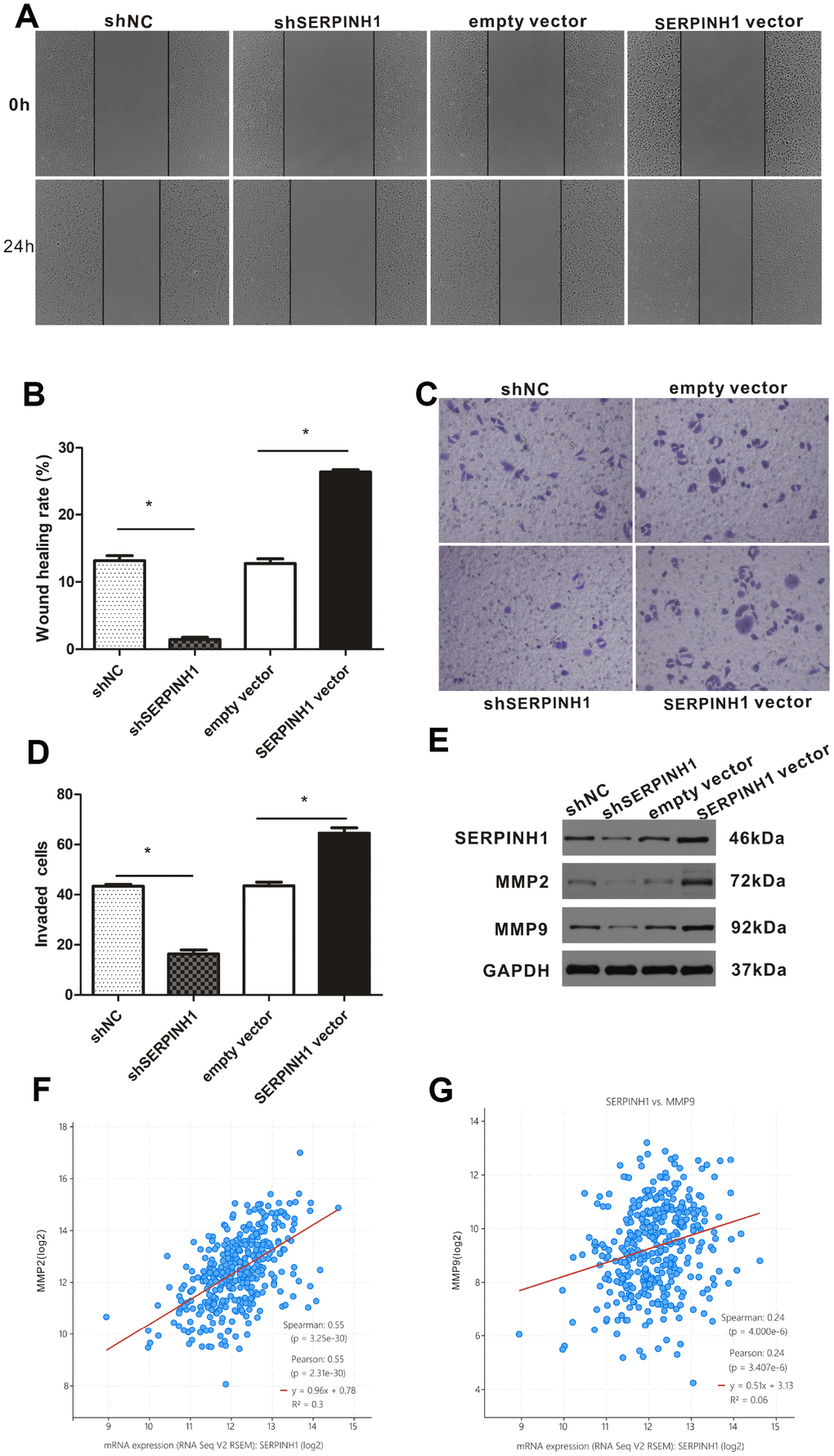 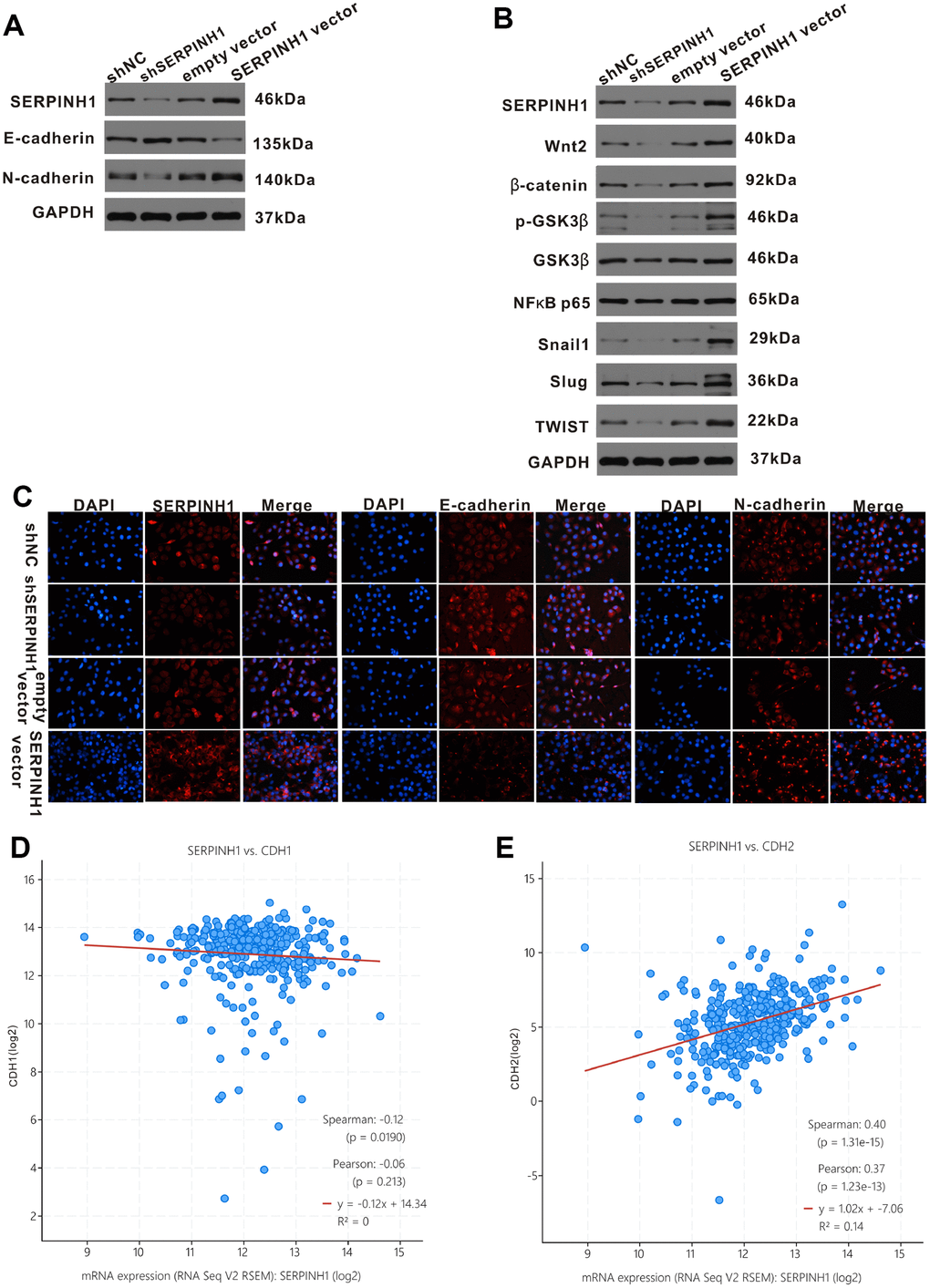 Finally, we analyzed the anti-tumor effects of Col003, a small molecule inhibitor of the SERPINH1 protein. We incubated SGC-7901 cells in medium containing different concentrations of Co1003 (0, 0.01, 0.1, 1, 10, 100, 1000 μM) for 24h, and analyzed the cell viability using the CCK-8 assay. The results showed a concentration-dependent reduction of SGC-7901 cell viability by Col003 comparison with the DMSO-treated control SGC-7901 cells (Figure 9A). The IC50 of Col003 was 47.57 μM, and this concentration for further experiments. Transwell migration and invasion assay showed that Col003 significantly decreased migration and invasiveness of SGC-7901 cancer cells compared with DMSO-treated control SGC-7901 cells (Figure 9B–9D). Wound healing assay showed that inhibition of SERPINH1 protein with Col003 in SGC-7901 GC cells significantly reduced their migration compared with the control cells (Figure 9E, 9F). These results demonstrate that Col003 inhibits viability, migration, and invasion of GC cells, and is a promising therapeutic target for GC 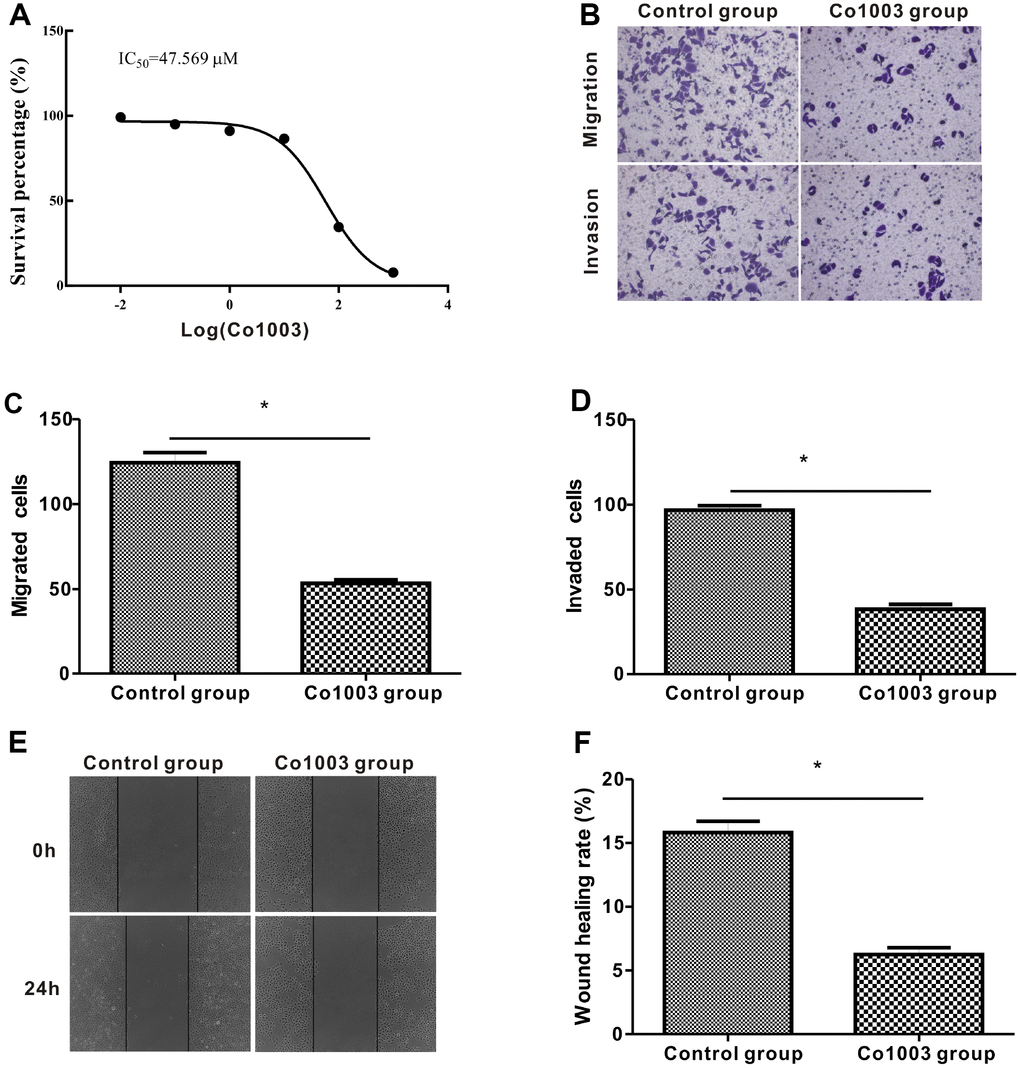 SERPINH1 protein is essential for the correct folding of precursor collagen proteins (pro-collagen) in the endoplasmic reticulum [11]. SERPINH1 has been implicated in several collagen-related diseases, such as, brittle bone disease [23], keloid scars [24], and lung fibrosis [25–27]. Zhu et al showed that SERPINH1 regulates extracellular matrix (ECM) gene transcription and is involved in breast cancer progression [13]. SERPINH1 also correlates with the grade of glioma, and regulates proliferation, migration and invasion of glioma cell lines [14]. SERPINH1 protein expression was significantly higher in colorectal cancer patients with lymph node metastasis [15]. Zheng et al analyzed the GEO database and showed that SERPINH1 was one of the five hub genes in GC [28]. Cao et al analyzed plasma mRNA profiles of 56 GC patients and 14 healthy individuals in the Oncomine database and demonstrated high SERPINH1 mRNA levels in the GC samples [29]. In this study, we analyzed SERPINH1 mRNA expression in 888 GC and 318 normal gastric mucosal tissues from three public databases (Oncomine, TCGA, and GEO). Our results show that SERPINH1 mRNA levels are significantly higher in the GC tissues compared with the normal gastric mucosal tissues. GC patients with high SERPINH1 mRNA levels in the TCGA (N=415) and GEO (N=876) datasets are associated with poorer prognosis than those with low SERPINH1 mRNA levels. Moreover, IHC assay of 102 clinical GC samples shows that high SERPINH1 protein expression correlate with poorer prognosis in GC patients. These data suggest that SERPINH1 is a prognostic indicator in GC patients.

Inhibition of SERPINH1 protein might be a promising strategy not only for the treatment of fibrosis disease, but also for the treatment of GC. Shinya et al reported that Col003 is a small molecule competitive inhibitor of SERPINH1 protein [38]. We demonstrate that treatment of GC cells with Col003 significantly decreases their survival, migration and invasiveness. This suggests that Col003 is a potential therapeutic option for GC patients.

To the best of our knowledge, the present study is the first to explore the clinical significance and molecular function of SERPINH1 in GC. However, our study has several limitations. First, the study cohort of GC patients from our hospital was relatively small. Secondly, we could not analyze the relationship between SERPINH1 and PFS because of lack of PFS data. Moreover, we performed overexpression and silencing of SERPINH1 separately in distinct GC cell lines. These issues need to be addressed in future investigations.

We obtained 102 GC and 48 adjacent noncancerous samples from the Department of Pathology in Renmin Hospital of Wuhan University. These samples were collected from patients that underwent surgery between 2015 and 2017. None of these GC patients received systematic radiotherapy or chemotherapy. We also obtained five pairs of fresh GC tissues and corresponding adjacent non-tumor gastric tissues during surgical resection from the Department of General Surgery in our hospital and stored the samples at −80 °C for western blot analysis. These samples were confirmed by two pathologists, Na Zhan and Zhi Zeng. We obtained written informed consent from all patients that participated in this study. This study was reviewed and approved by the Institutional Review Board of Renmin Hospital of Wuhan University.

Immunohistochemistry (IHC) staining was performed as previously described [41]. Briefly, tissue sections were deparaffinized and rehydrated in graded ethanol solutions. Then, the deparaffinized tissue specimens were boiled in 10mM citrate buffer (pH 6.0) for 20 minutes for antigen retrieval. Subsequently, the endogenous peroxidase activity was blocked by incubating with 3% H2O2 solution. The tissue sections were then incubated with the anti-SERPINH1 protein (HSP47) antibody (1:300 dilution, ab109117, Abcam). The sections were developed using 3, 3’-diaminobenzidine (DAB) and counterstained with hematoxylin. The negative control sections were incubated in parallel with the immunoglobulin IgG (1:300) instead of the SERPINH1-specific antibody.

IHC staining was evaluated by two experienced pathologists using a semi-quantitative scoring system based on the intensity of staining and the percent of positively-stained cells. The staining intensity of specimens was scored as 0 (negative), 1 (weak), 2 (moderate) and 3 (strong). The positive expression of SERPINH1 protein was scored as 0 (0%), 1 (<25%), 2 (25%-50%), 3 (50%-75%), and 4 (>75%) based on the percentage of positive stained cells [42]. The final staining scores for all samples were obtained by multiplying the staining intensity and the positive SERPINH1 expression scores. The median score was used to categorize low or high SERPINH1 protein expression groups in order to determine prognosis of GC patients.

Cell viability of GC cells was estimated using the CCK-8 assay. Experimental and control GC cells were seeded into 96-well plates at a density of 105 cells per well for 24h. Then, 10 μL of CCK-8 reagent (C0038, Biyuntian biotechnology company) was added into each well and incubated for another 4 h at 37°C. The absorbance was measured at a wavelength of 450 nm. The concentration of Col003 required to reduce GC viability by 50% (IC50) was determined using the GraphPad Prism 5 software.

A scratch wound was made using a sterile 100 μl pipette tip in a monolayer of GC cells that were seeded in 6-well plates. The scratch wound was imaged at the 0 and 24 h time points using a phase contrast microscope. The mean distance between the two edges of cell free area was used to determine the wound healing or cell migration rate.

GC cells (300 cells per well) stably transfected with control or shRNAs against SERPINH1 or control and SERPINH1 overexpression vector were cultured in 6-well plates at 37°C for 2 weeks. Then, the colonies were stained with 0.1% crystal violet. The colonies (>50 cells) were imaged and quantified under a light microscope.

We determined GC cell migration and invasion using the Transwell assay. For the invasion assay, we coated the polycarbonate membrane in the transwell chambers with Matrigel (Corning, USA). We transferred 2 x 104 cells in serum-free medium into the top chamber and added medium with serum in the bottom chamber, and incubated at 37 °C for 24 h. Then, we removed the non-invading cells on the top side of the membrane by scrubbing, fixed the migrating or invading cells at the bottom side of the membrane with 4% paraformaldehyde (PFA), and stained with 0.1% crystal violet. The total number of cells was counted under the light microscope to determine the number of cells that migrated or invaded in each experimental group.

We used the apoptosis detection kit (AO2001-02P-G, Sanjian, Tianjin) to estimate the apoptotic rate of different experimental groups of GC cells. We centrifuged 5×105 cells for 5 min at 300xg and resuspended the cells in 300μl binding buffer. Then, the cells were incubated with 5 μL Annexin V-FITC for 10 min followed by 5 μL propidium iodide (PI) at 37°C in darkness for 5 min. Finally, the cells were analyzed by flow cytometry using the BD Aria III flow cytometer (BD Biosciences). The percentage of apoptotic cells in samples were determined by estimating the percentage of Annexin V + PI+ and Annexin V+ PI- cells.

ST, HD, NZ and ZZ performed the experiments; PP and JL analyzed the data; ST and PP wrote the manuscript; WGD conceived the study design and revised the paper; All the authors read and approved the final manuscript.

The authors thank Dr. Vikash for help in editing the grammar in this article.

The authors declare that there are no conflicts of interests.

This work was financially supported by the National Natural Science Fund of China (NSFC; Grant No. 8157101984).