Molecular pathways regulating the initiation and development of melanoma are potential therapeutic targets for this aggressive skin cancer. Therefore, transcriptome profiles of cutaneous melanoma were obtained from a public database and used to systematically evaluate cancer hallmark pathways enriched in melanoma. Finally, the unfolded protein response pathway was screened out, and the unfolded protein response-related genes were used to develop a robust biomarker that can predict the prognosis of melanoma, especially for younger, metastatic and high Clark level patients. This biomarker was further validated in two other independent datasets. In addition, melanoma patients were divided into high- and low-risk subgroups by applying a risk score system. The high-risk group exhibited higher immune infiltration and higher expression of N6-methyladenosine RNA methylation regulators, and had significantly shorter survival times than the low-risk subgroup. Gene Set Enrichment Analysis revealed that, among the enriched genes, gene sets involved in immune response and the extracellular matrix receptor interaction were significantly activated in the high-risk group. Our findings thus provide a new clinical application for prognostic prediction as well as potential targets for treatment of melanoma.

Melanoma is a severely life-threatening type of skin cancer with high malignant metastasis [1]. About 75% of deaths in skin cancer are caused by melanoma which had become one of the most difficult human cancers to cure. Once it has spread metastasized, physical therapy is difficult to work and the 5 years survival rate will drop to 20% from 99% [2–5]. Thus, it is urgently required to explore the new prognostic pathways and signatures of melanoma to improve prognosis and guide more effective treatment. Melanoma originates from the malignant transformation of melanocytes. The melanocytes will produce large number of melanin when stimulated by environmental factors, such as ultraviolet rays. Afterwards, benign melanocytes assemble clusters or format nevi because of uneven distribution of melanin. Although most of the changes are benign, combined the influence of environmental and genetic risk factors, this transformation will lead to cutaneous melanoma at some degree [6]. The exact steps that lead to initiation of melanoma still remain undefined. For example, the research for genetic evolution of melanoma found that only a third of melanomas appears to be associated with a pre-existing nevi [7, 8]. Whether there exist different biological signaling regulations between melanoma and nevi is not clear. However, gene mutation result in genetic diversity and susceptibility to DNA damage stimulated by ultraviolet light were the obviously definitive reasons [9]. Genomic technologies analysis has proved several genetic mutations and correlated pathways are closely associated with melanoma initiation and progression [10, 11]. For instance, mutations of BRAF and NRAS target the mitogen-activated protein kinase (MAPK) pathway which is disorderly regulated in almost all melanomas [12, 13]. MAPK pathway mainly associated with cell proliferation, but various other downstream regulations will cause tumor metastasis and cellular metabolic disorders [14]. Moreover, the mutation of CDKN2A leads HDM2 or MDM2 to inactivate p53 pathway which cause p53 loss and increase the survival of tumor cells [15–17]. Thanks to these basic researches, the emergence and approval of inhibitors like BRAF, RAS and MEK bring a promising treatment for melanoma patients [18, 19]. Therefore, it’s not surprising that gene biomarkers and molecular pathways regulating melanoma can provide us with more attractive therapeutic targets for this aggressive cancer. Although there have been increasing studies exploring the melanoma by using different individual risk gene and pathway, a comprehensive analysis with an overall landscape of cancer hallmark pathways and related genes is still lacking [20–22]. Fortunately, the availability of public, large-scale datasets like the cancer genome atlas (TCGA) and Gene Expression Omnibus (GEO) databases which afforded numerous transcriptome profiles to investigate potential cancer hallmark pathways enriched in melanoma and the novel correlated gene features that can predict the clinical outcomes of patients. Therefore, in this research, we first extracted 50 cancer hallmark pathways from the molecular signature database (MSigDB) and systematically evaluated the differential activities of pathways in multiple datasets. Next, we used univariate and multivariate cox regression method to identify several prognostic hallmark pathways as well as unfolded protein response related features associated with the clinical characteristics. We found that the expression of unfolded protein response feature plays critical roles in the prognostic process of melanoma and could be an independence potential biomarker.

The landscape of cancer hallmark pathways in melanoma 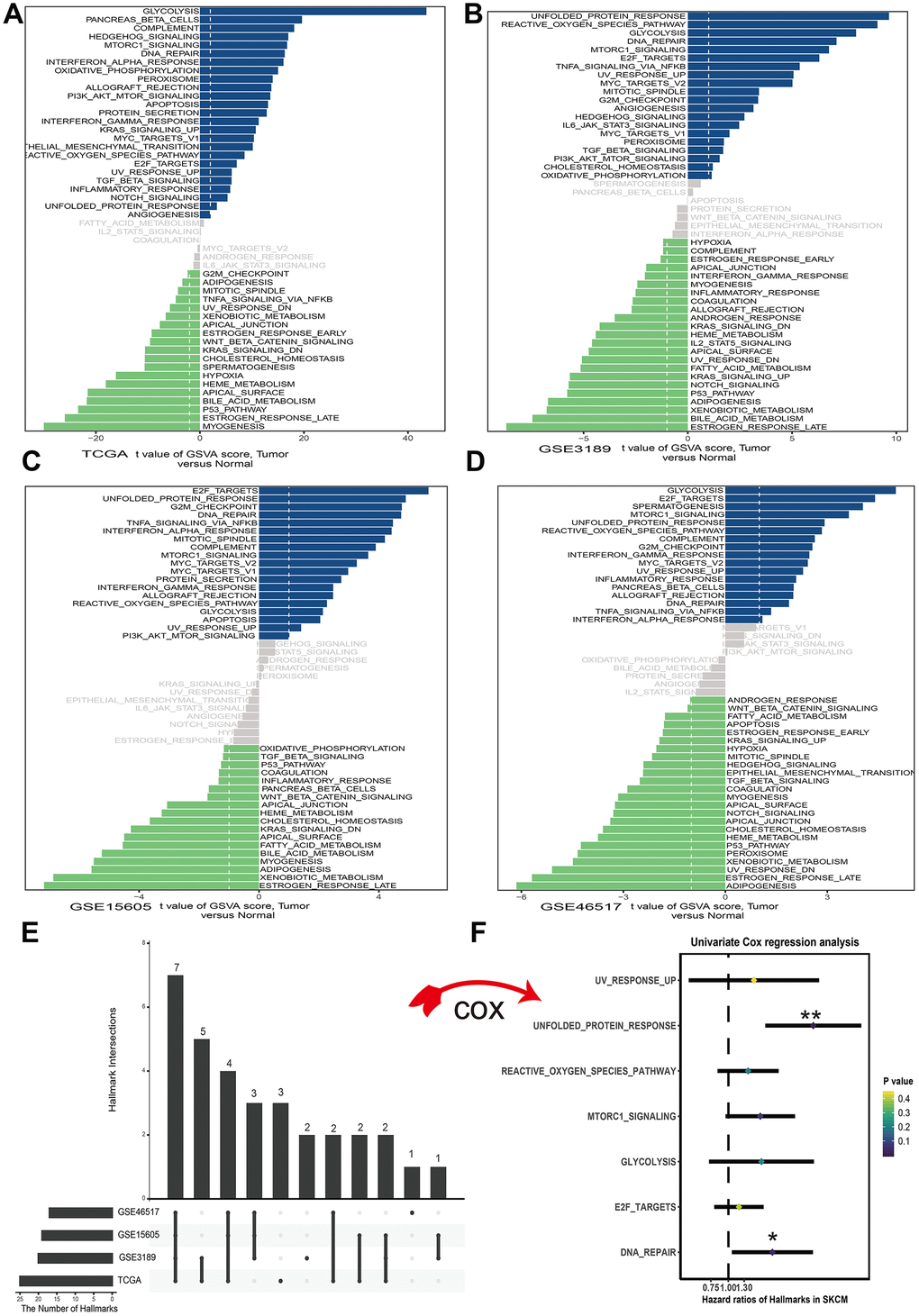 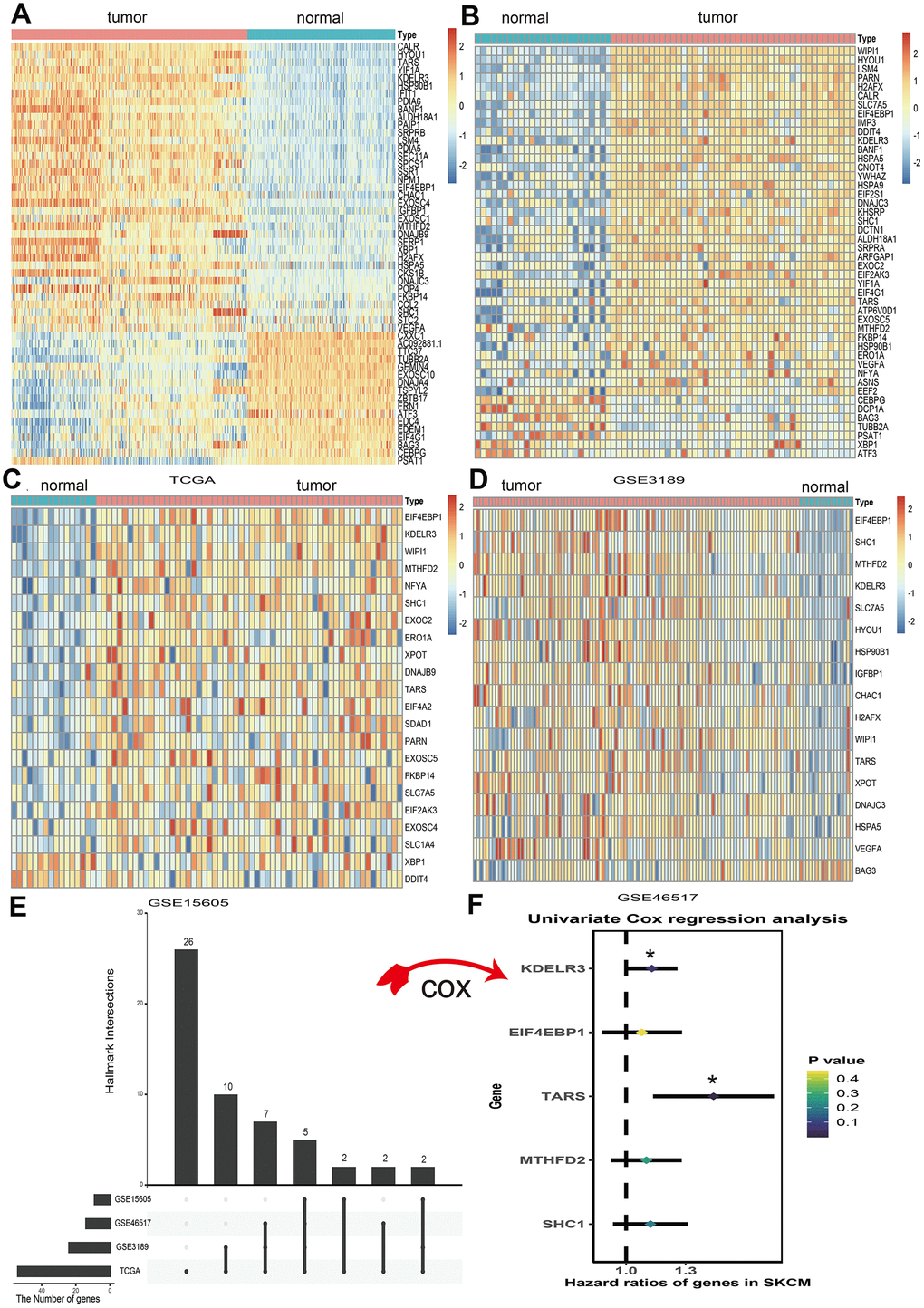 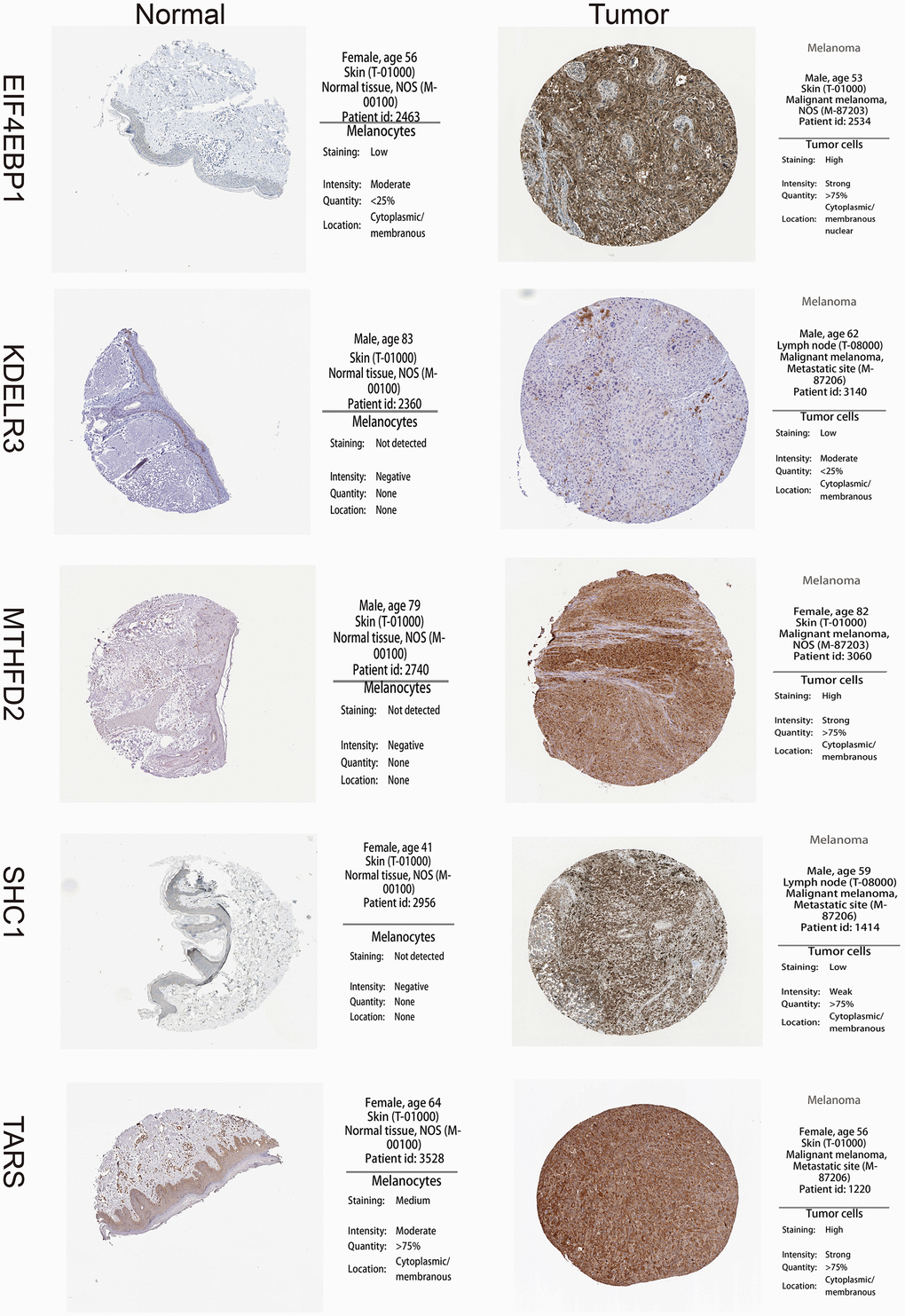 Firstly, univariate cox regression analysis was applied to assess relationships between 5 differentially expressed UPRRGs and OS in TCGA dataset. The results of univariate regression for 5 differentially expressed UPRRGs were listed Table 1. Based on the selection criteria, 2 survival-related UPRRGs were seeded out (Figure 2F). Kaplan-Meier plots of 2 survival-related UPRRGs manifested that high expression of TARS (Figure 4A) and KDELR3 (Figure 4B) was associated poor survival in melanoma. Then, we used multivariate cox regression analysis to calculate coefficients for each gene and construct the risk score system. Compared the area under the curve (AUC) of TARS and KDELR3, the ROC curve for risk score was superior to KDELR3 or TARS alone (Figure 4C). The distributions of the risk scores, OS, vital status, and expression levels of corresponding UPRRGs in TCGA dataset were shown in Figure 4D–4F. Next, by applying this risk model, a risk score for each sample in TCGA dataset will be generated. Then, melanoma samples were classified into a high-risk group (n = 179) and a low-risk group (n = 179) by applying the median cut-off value of the risk scores. Kaplan-Meier curves showed that patients in high-risk group have a shorter survival time than low-risk with a log-rank test of p=0.007. To estimating the prediction power of 2 UPRRGs features, the ROC curve was drawn and 5 years of AUC was 0.618 (Figure 4G). Besides, in order to confirm the robustness of the result, verification test was conducted in GSE65904 and GSE54467 datasets. The GSE65904 and GSE54467 datasets were divided into high-risk and low-risk groups based on TCGA dataset. Kaplan-Meier curves showed that there is a significant difference between high-risk and low-risk group both in GSE65904 dataset (log-rank p=0.05) and GSE54467 dataset (log-rank p=0.006) (Figure 4H, 4I). The 5 years of AUC were 0.607 and 0.689 respectively. 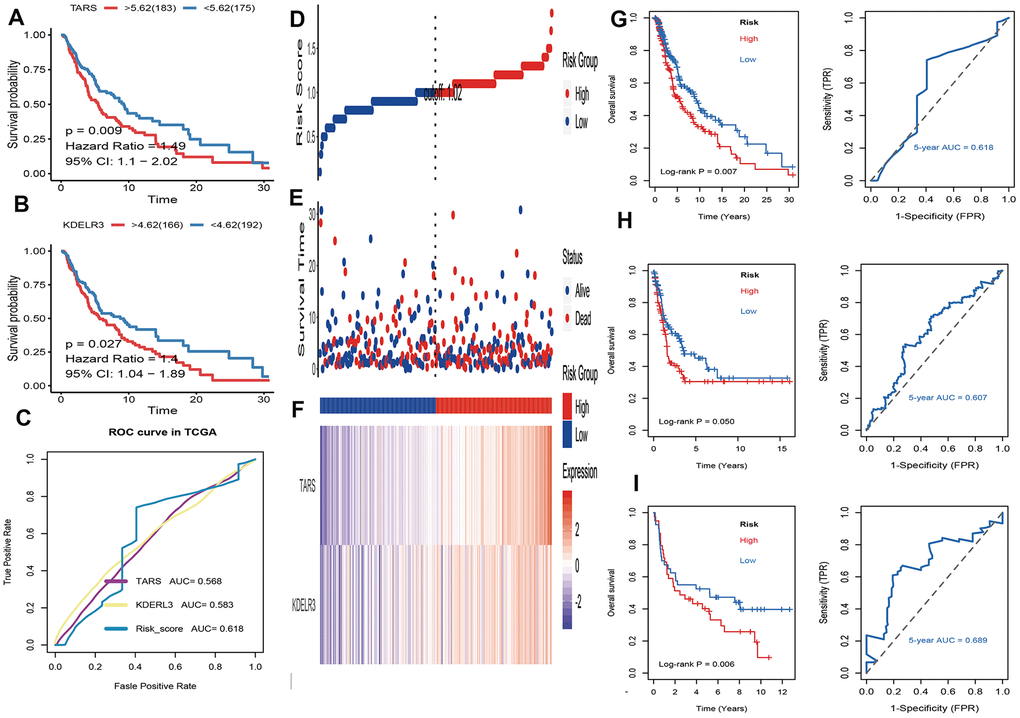 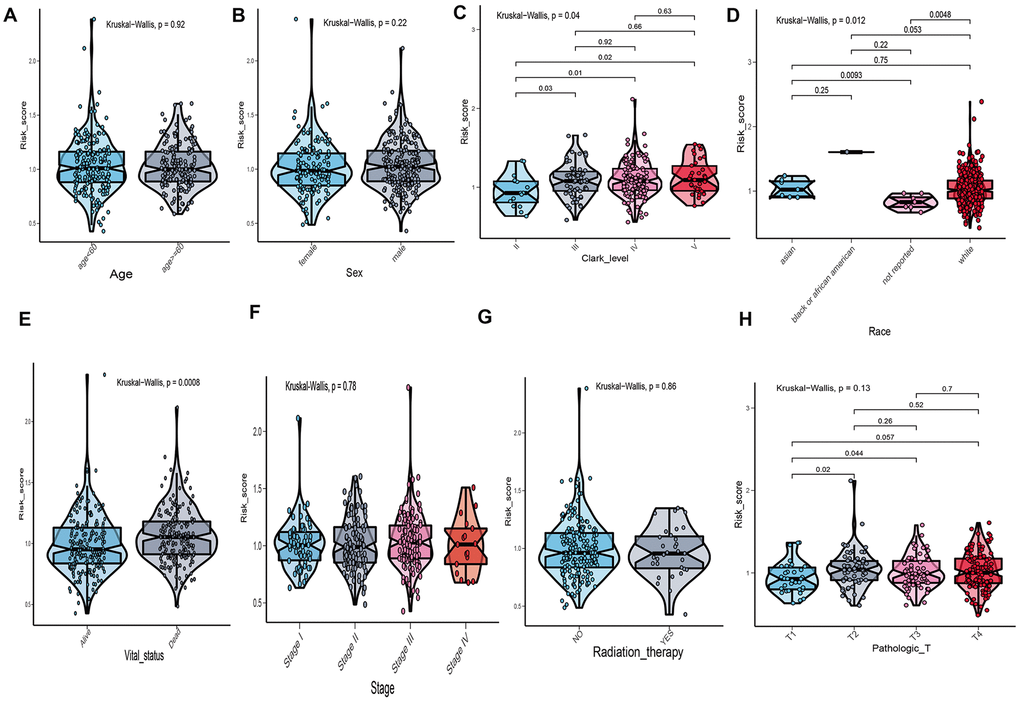 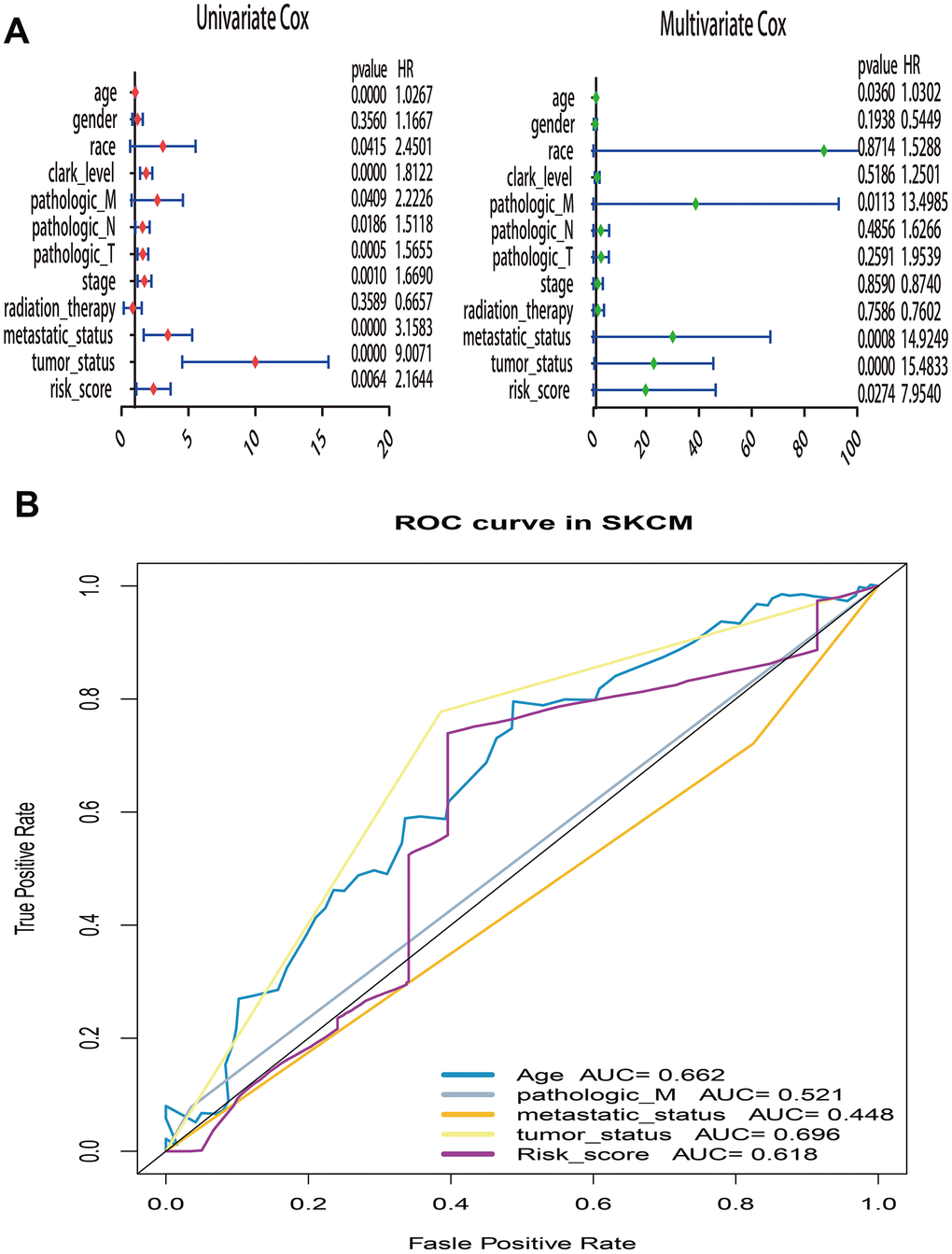 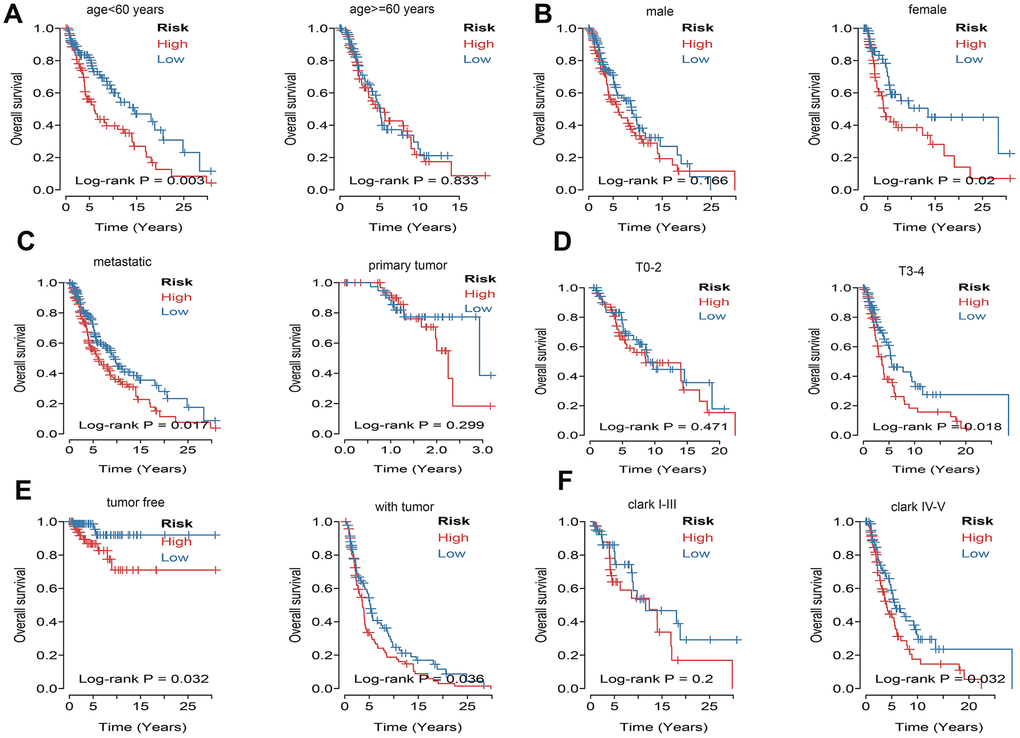 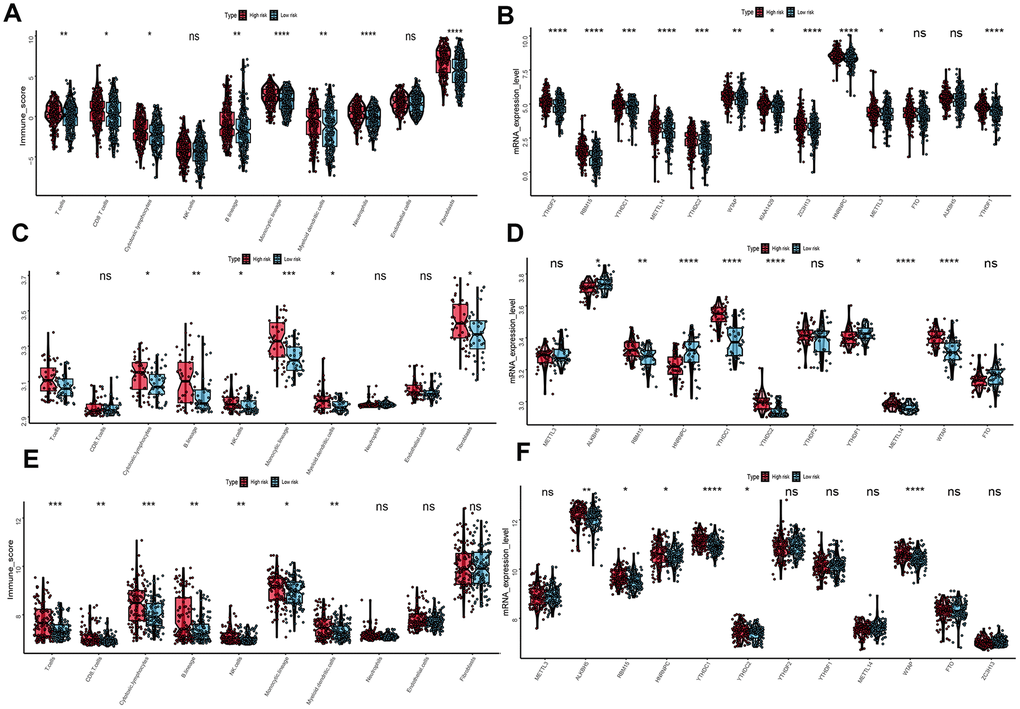 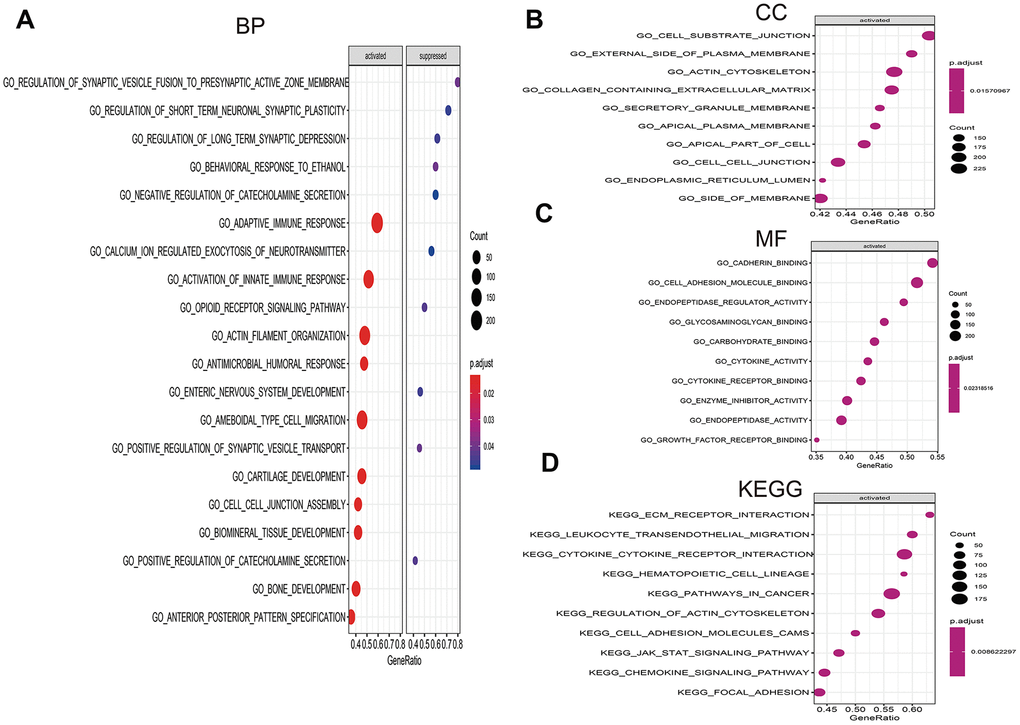 In summary, our study identified several hallmark pathways and prognostic UPRRGs feature in melanoma. The biomarker and pathways supply a more simple and accurate prediction for the prognosis of melanoma in clinical application. Furthermore, investigations are needed to verify the accuracy for estimating prognoses and to test its clinical utility in patient management.

The transcriptome profiles of RNA sequencing data of cutaneous melanoma as well as clinical information were obtained from the Xena Public Data Hubs (http://xena.ucsc.edu) and GEO database (https://www.ncbi.nlm.nih.gov/geo). Gene expression profiles GSE3189, GSE15605 and GSE46517 were downloaded from GEO database. The GSE3189 dataset contained 70 samples, including 7 normal skin, 18 nevi and 45 melanoma samples. GSE15605 had 16 normal skin samples and 58 melanoma samples. GSE46517 included 121 samples which consist of 9 nevus samples, 8 normal skin and 104 melanoma samples. The TCGA expression profile of cutaneous melanoma were downloaded from the Xena Public Data Hubs, which contained 372 melanoma samples and 233 healthy skin tissue samples. The characteristics of datasets were summarized in Table 3. The raw data were processed by applying R software. Firstly, the probe IDs were annotated according to the annotation information of platform. For the same gene corresponding to multiple IDs, the max expression value will figure out to represent the gene expression level. Next, genes with a variance of 0 will be excluded for its tiny expression level. Finally, the raw matrix data were normalized by log2(x+1) conversion.

Table 3. Summary of datasets used in this research. NA means not available.

Evaluation of the prognose of cancer hallmark pathways

Firstly, the gene expression levels of UPRRGs were extracted from the four datasets (GSE3189, GSE15605, GSE46517 and TCGA). These datasets were classified into tumor group and normal group. Next, the differential analysis was performed to identified differentially expressed UPRRGs by conducted “Limma” method in R software. The cutoff standard was The |log 2 FC| ≥ 0.5 and p values <0.05. Then, the Upset plot analysis was used to explore the overlap of differentially expressed UPRRGs among these datasets. In addition, these genes will further be validated in The Human Protein Atlas database.

Identification and validation of UPR features

Evaluation of relationship between UPR features and clinical variables

In order to clarify the relationship between risk score of UPR features distribution and clinicopathologic characteristics, the subgroup analysis of clinical variables included age, sex, race, stage, tumor size, vital status, Clark level and radiation therapy were performed. Moreover, in order to compare the prognostic value between the risk score and clinical variables. The univariate and multivariate cox logistic regression were carried out to define prognostic factors in multiple datasets (TCGA, GSE65904 and GSE54467). Next, these melanoma patients were stratified into subgroups based on their clinical variables, such as age (<60 or >=60), sex (male or female), metastatic status (metastatic or primary), tumor size (T0-2 or T3-4), tumor status (tumor free or with tumor) and Clark level (I-III or IV-V). Kaplan–Meier plots were used to explore the prognostic value of UPR features in different clinical subgroups.

Evaluation of association between UPR features and immune microenvironment

To explore the relationship between UPR features and immune microenvironment in melanoma, “MCPcounter” package in R was applied to specifically discriminate 8 human immune cells and 2 stromal cells which including T cells, CD8 T cells, B cells, cytotoxic lymphocytes, natural killer (NK) cells, monocytic lineage, myeloid dendritic cells, neutrophils, endothelial cells and fibroblasts. Next, these immune and stromal cells were divided into high- and low-risk groups according the risk score of UPR features and then subgroup analysis of these cells were performed.

In order to explore the different signaling pathways between the low- and high-risk groups, Gene Set Enrichment Analysis (GSEA) was conducted by “clusterProfiler” package in R software. Firstly, the differential analysis of all genes between low- and high-risk groups were generated and these genes were ordered by the value of log2 fold change. Then GSEA was performed to investigate the signaling pathways correlated with different subgroups of melanoma. The q value<0.05 was applied to selected the significant pathways enriched in each phenotype.

Data generated and/or analyzed during the current study can be obtained from the corresponding author on reasonable request.

The authors declare that they had no conflicts of interest.