Copyright: © 2020 Gao et al. This is an open access article distributed under the terms of the Creative Commons Attribution License (CC BY 3.0), which permits unrestricted use, distribution, and reproduction in any medium, provided the original author and source are credited.

The molecular mechanism of osteosarcoma (OS) pathogenesis is poorly understood. The Notch signaling pathway has been shown to be critically involved in tumorigenesis, including OS. Therefore, we explored the molecular mechanism by which the Notch-1 signaling pathway is involved in OS progression. Several approaches were carried out to determine the biological function of Notch-1 in OS cells. The MTT results revealed that Notch-1 overexpression increased the viability of OS cells, whereas Notch-1 downregulation reduced cell viability. Consistently, modulation of Notch-1 regulated apoptosis and the migratory and invasive abilities of OS cells. Mechanistic studies showed that Notch-1 overexpression augmented cell division cycle 20 (Cdc20) expression in OS cells. Moreover, overexpression of Cdc20 alleviated the inhibitory effects of Notch-1 downregulation on the viability, migration and invasion of OS cells. Our study offers a promising OS treatment strategy by inhibiting Notch-1.

Osteosarcoma (OS) is a frequent aggressive bone tumor that occurs in children and young people [1, 2]. OS patients often experience metastasis to the bone marrow, brain and liver, leading to a worse prognosis [3]. In addition, during chemotherapeutic treatments, OS patients develop drug resistance [4]. The molecular mechanism of OS development and progression has not been fully elucidated [5]. Thus, exploration of OS pathogenesis is pivotal for the development of new treatment strategies to effectively fight OS. The Notch signaling pathway participates in development, differentiation and tumorigenesis [6–8]. It is known that mammals have four Notch receptors (Notch-1, Notch-2, Notch-3 and Notch-4) and five ligands (DLL-1, DLL-3, DLL-4, Jagged-1 and Jagged-2) [9]. Notch signaling is activated when the Notch receptor binds with its ligand, and subsequently, three proteolytic cleavages occur via several enzymes, including γ-secretase complex, and eventually produce intracellular domain of Notch (NICD), which activates its downstream targets [10, 11]. Therefore, gamma secretase inhibitors (GSIs) could inactivate Notch activation [12, 13].

GSI treatment reduced the proliferation of OS cells in vitro, and chemical and genetic suppression of Notch slowed tumor growth in nude mice [14]. Similarly, GSI treatment slowed cell proliferation and tumor growth both in vitro and in vivo in OS [17]. GSI treatment also induced cell cycle arrest at G1 phase in OS cells via a reduction in the expression of several cell cycle accelerators, such as cyclin D1, E1, and E2 and Skp2 [17]. Conditional expression of NICD in immature osteoblasts in one mouse model led to bone tumors, including OS [19]. Moreover, the loss of p53 in combination with Notch activation accelerated OS occurrence in mice, indicating that Notch activation was a key driver of OS [19]. These reports reveal that the Notch pathway is critically involved in OS development.

Although Notch-1 has been shown to exert its oncogenic effects in OS, the detailed underlying mechanism has not been fully understood. Our previous studies have shown that cell division cycle 20 (Cdc20) promotes cell proliferation and motility in OS cells [20]. Inhibition of Cdc20 by its inhibitor Apcin suppressed viability, migration and invasion in OS cells [21]. In the present study, we explored the effects of Notch-1 on viability, apoptosis, migration and invasion in OS cells. Moreover, we determined whether Notch-1 exerts its biological effects via the upregulation of Cdc20 in OS cells. Our study might provide the rationale for a new therapeutic strategy by targeting the Notch-1 pathway in OS.

Evidence has shown that Notch-1 might participate in OS development and progression. To examine whether the modulation of Notch-1 expression levels affects the viability of OS cells, we performed MTT assays in U2OS and MG63 cells after Notch-1 shRNA transfection. Our MTT data showed that Notch-1 shRNA infection repressed viability in both U2OS and MG63 cells at 48 hours and 72 hours (Figure 1A). This result revealed that the inhibition of Notch-1 by shRNA transfection impaired the viability of OS cells. 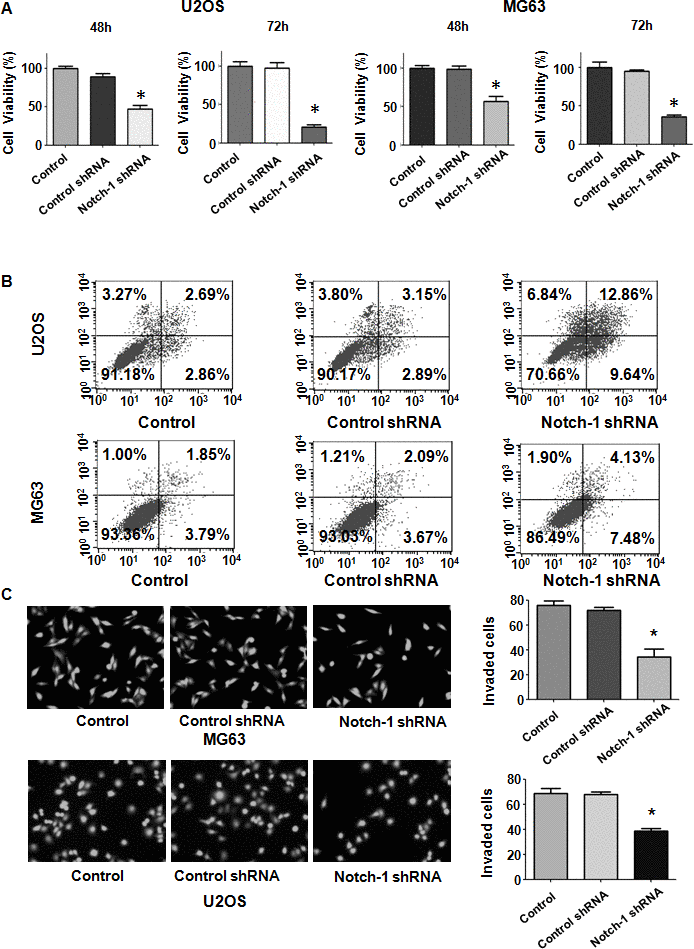 Notch-1 has been shown to regulate motility in cancer cells. Thus, we examined whether Notch-1 could modulate the cell migrative and invasive ability of OS cells. A Transwell chamber assay was performed to detect the invasive activity of OS cells after Notch-1 shRNA transfection. We observed that the suppression of Notch-1 reduced the invasive ability of U2OS and MG63 cells (Figure 1C). Accordingly, a wound healing assay was employed to examine the migrative ability of OS cells after Notch-1 downregulation. Our data demonstrated that in OS cells, Notch-1 shRNA infection led to a reduction in wound closure compared with that of the control group (Figure 2A, 2B). In summary, Notch-1 inhibition reduced the migration and invasion of OS cells. 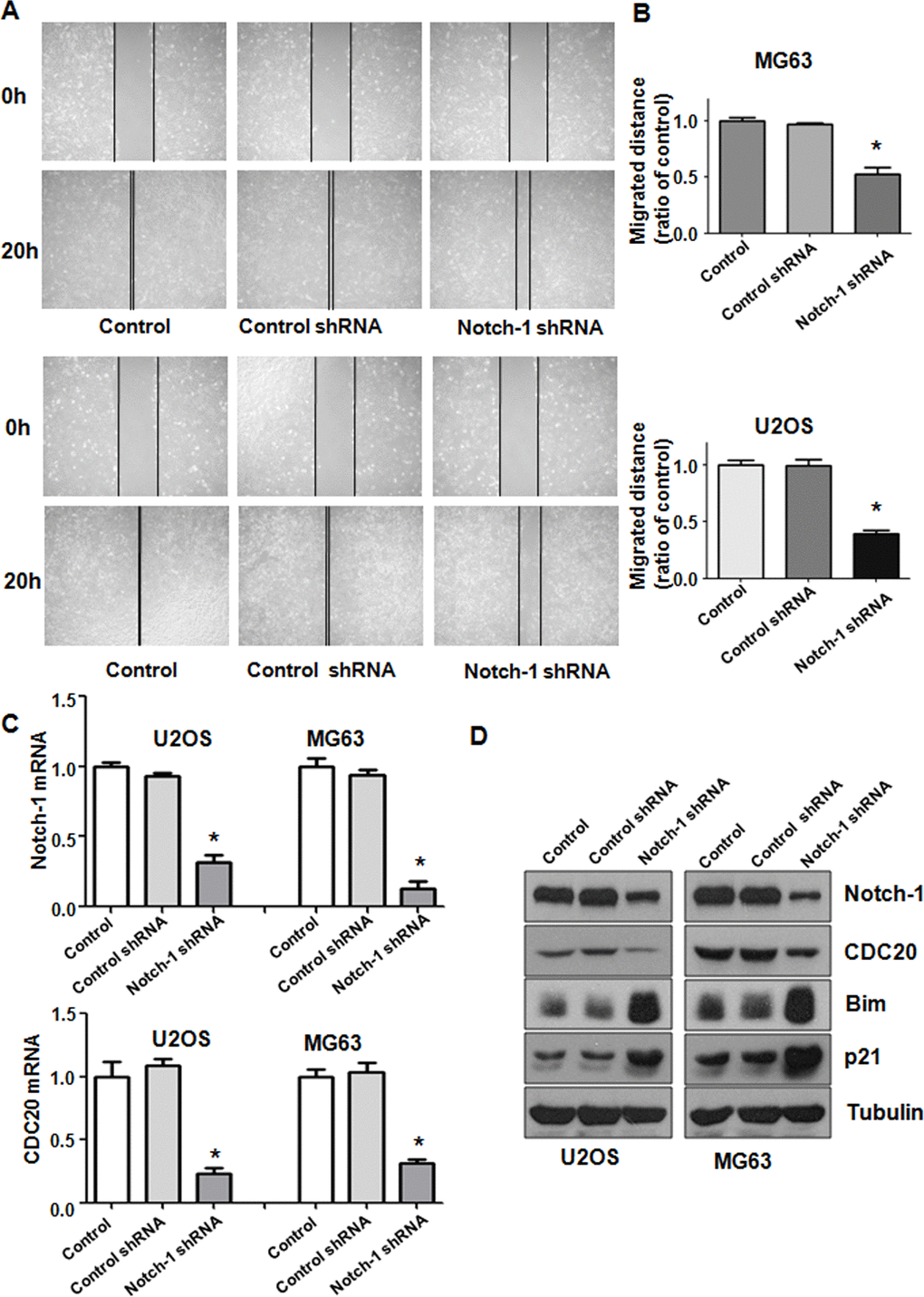 To further investigate the biological function of Notch-1 in OS cells, a Notch-1 cDNA vector was transfected into U2OS and MG63 cells. The MTT assay was employed to examine the viability of OS cells after Notch-1 cDNA vector transfection. Notch-1 upregulation led to the promotion of viability in U2OS and MG63 cells (Figure 3A). These MTT data suggest that Notch-1 overexpression facilitates the viability of OS cells. In addition, the apoptosis rate of OS cells after Notch-1 cDNA vector transfection was determined by a PI-FITC-annexin assay. Notch-1 overexpression repressed apoptosis in both U2OS and MG63 cells (Figure 3B). Apoptosis was alleviated from 8% to 1% in U2OS cells in Notch-1 cDNA group (Figure 3B). A similar trend in apoptosis reduction was observed in MG63 cells (Figure 3B). Taken together, these results suggest that Notch-1 upregulation enhances cell viability and represses apoptosis. 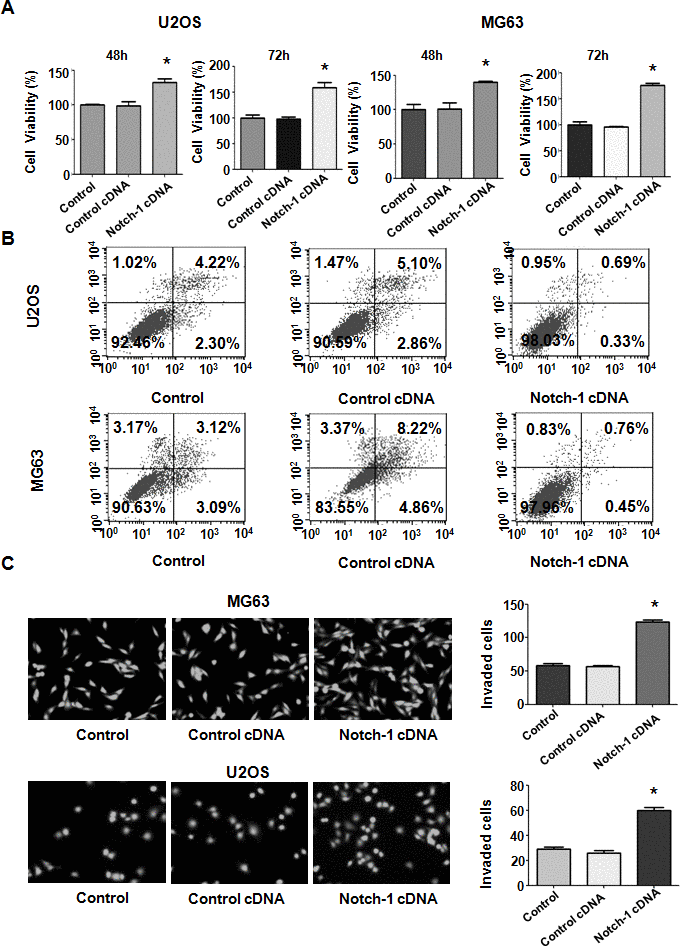 To further test the function of Notch-1 in governing the invasive ability of OS cells, a Transwell assay was carried out to analyze the invasiveness of U2OS and MG63 cells after Notch-1 overexpression. We found that the upregulation of Notch-1 increased the number of invading U2OS and MG63 cells (Figure 3C). The wound healing assay was applied for examining the migrative activity of OS cells overexpressing Notch-1. The data showed that Notch-1 overexpression facilitated the wound closure rate of MG63 and U2OS cells (Figure 4A, 4B). In summary, Notch-1 upregulation facilitated the motility of OS cells. 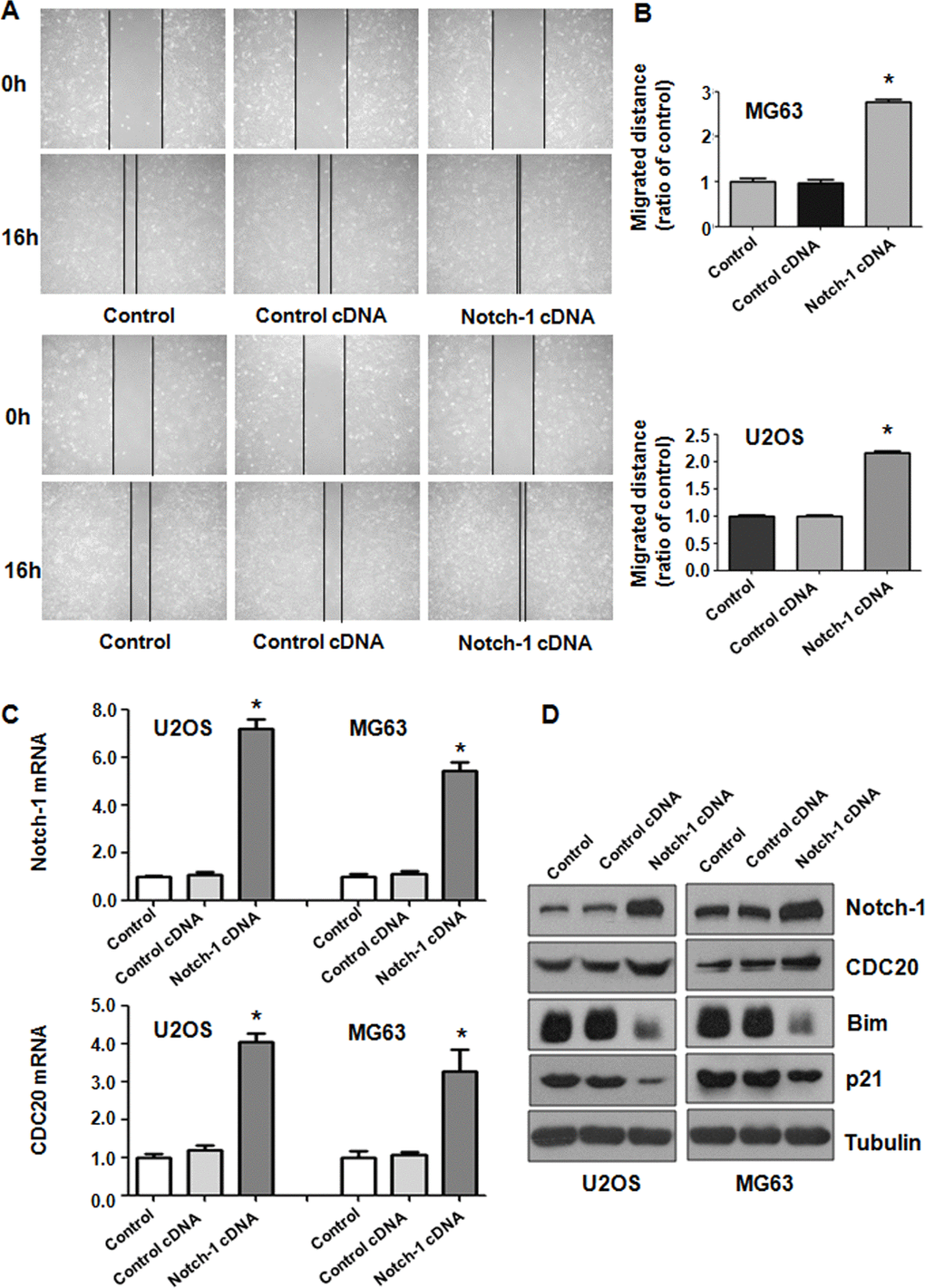 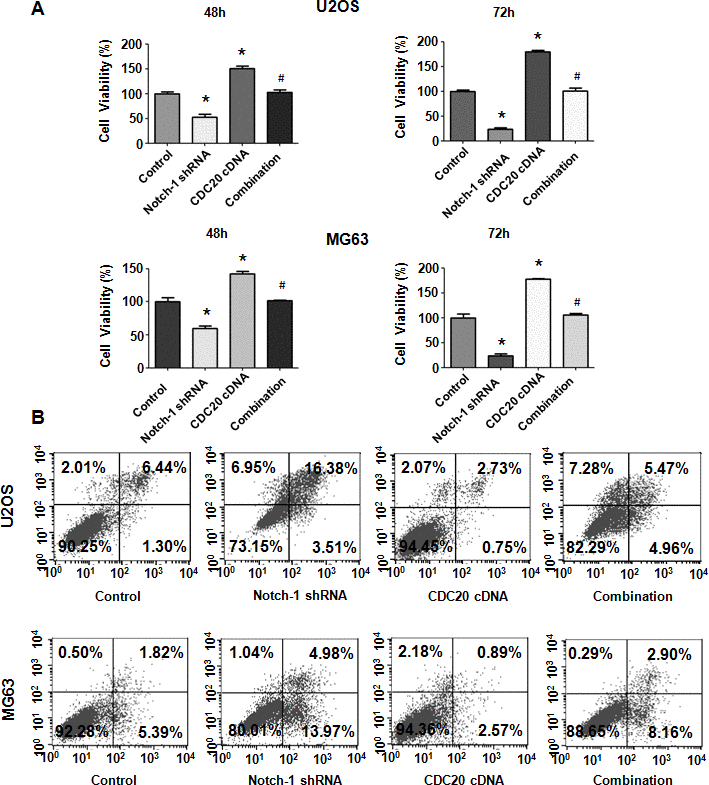 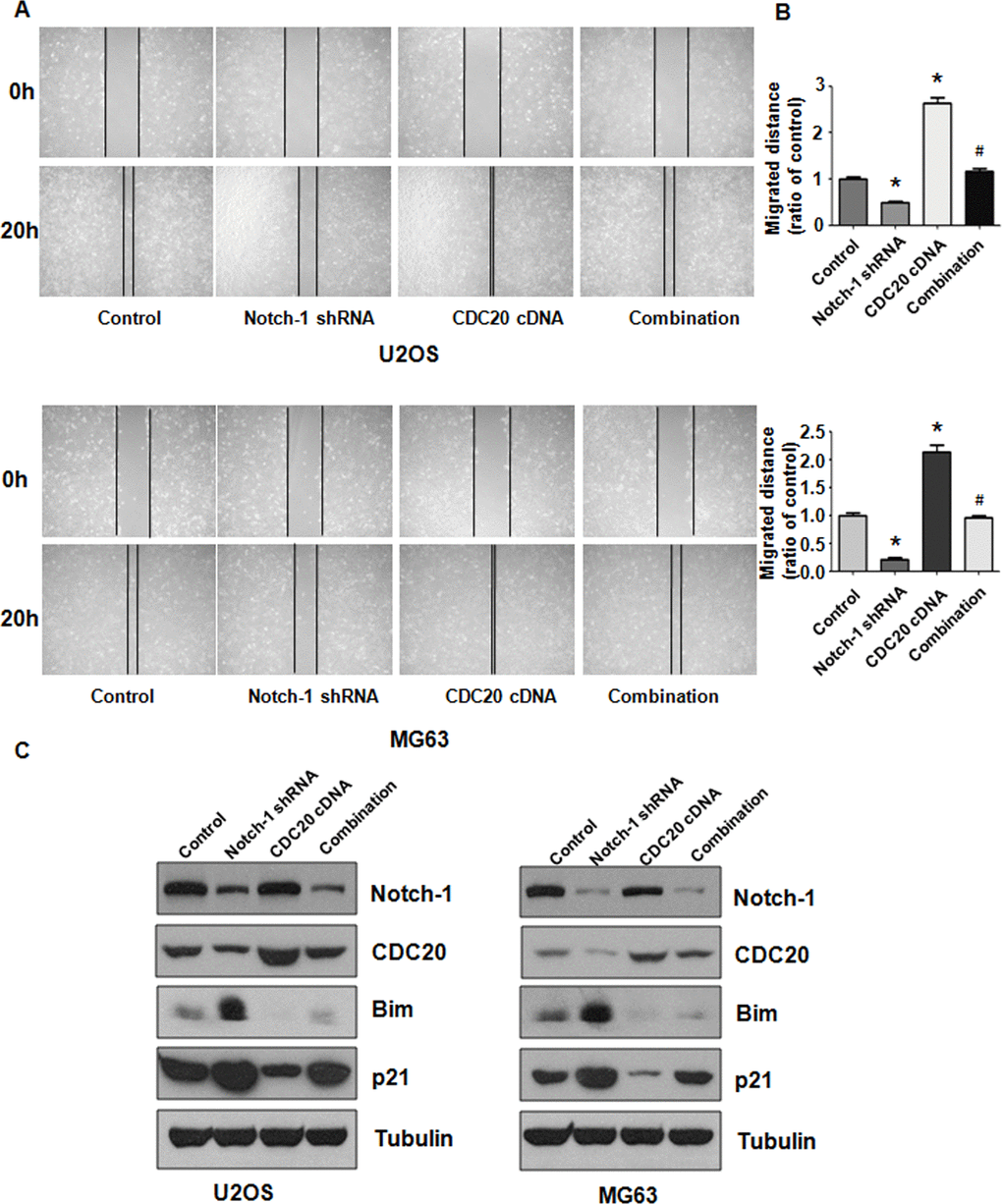 A line of evidence has implicated a crucial role of Notch-1 in OS development and progression. OS cells with increased expression of Notch-1, Notch-2, DLL1 and Hes-1 exhibited a high ability to metastasize [22]. Moreover, GSI treatments led to the suppression of the invasiveness of OS cells. Strikingly, DAPT inhibited ERK phosphorylation and alleviated proliferation and metastasis in OS cells [23]. Furthermore, Hes-1 expression was inversely associated with survival in OS patients [22]. Interestingly, Hes-1 and Deltex1 also reciprocally inhibited Notch signaling to attenuate OS invasiveness [24]. These reports indicate that the Notch signaling pathway is involved in OS metastasis [22]. In the present study, we identified that Notch-1 plays an oncogenic role in OS, including promoting cell viability, migrative and invasive ability, and suppressing apoptosis.

Several studies have revealed the molecular mechanism of the Notch pathway in OS tumorigenesis. For example, the Notch pathway activates OS progression via the upregulation of ephrinB1 [25]. Our study dissected that Notch-1 activates Cdc20 expression and inhibits Bim and p21 expression in OS cells. Moreover, Notch-1 gains its oncogenic function via the upregulation of Cdc20 in OS.

Therefore, targeting Notch-1 might be an effective treatment for OS patients with increased levels of Notch-1. Multiple compounds have been identified that suppress the activation of Notch-1 in OS. For instance, curcumin, a phenolic agent derived from Curcuma longa, repressed

the proliferation and invasion of OS cells by blocking Notch-1 signaling [26]. Diallyl trisulfide suppressed proliferation, invasion and angiogenesis via the inactivation of Notch-1 and activation of suppressor miRNAs in OS cells [27]. Oleanolic acid stimulated OS cell apoptosis via the suppression of the Notch signaling pathway [28]. Resveratrol inhibited OS progression via the upregulation of miR-139 and subsequent downregulation of Notch-1 in OS cells [29]. It is necessary to explore whether these natural agents could inhibit the expression of both Notch-1 and Cdc20 in OS cells.

Studies have also demonstrated that noncoding RNAs regulate Notch-1 in OS cells. One group reported that miR-34a repressed cell proliferation and metastasis in OS cells via targeting the Notch signaling pathway [30]. Moreover, miR-34a exerts a combinational effect with celecoxib in the regulation of the proliferation and invasiveness of OS cells by targeting Notch-1 [31]. Another study revealed that miR-199b-5p participated in osteosarcoma progression via the regulation of Notch pathways [32]. In addition, miR-135b elevated OS distant metastasis and recurrence via the activation of the Notch and WNT/β-catenin pathways [33]. The overexpression of miR-340 enhanced OS cell apoptosis, and inhibited proliferation and motility via the repression of the Notch signaling pathway [34]. Another study revealed that miR-1296-5p repressed the growth, migration and invasion of OS cells by targeting Notch-2 [35]. Moreover, miR-92a blocked OS progression and induced cisplatin sensitivity via the inhibition of Notch-1 [36].

Recently, lncRNA MEG3 was shown to repress proliferation, stimulate apoptosis in OS cells and block metastasis by reducing Notch-1, Jagged-1, Hes-1 and NICD1 [37, 38]. Similarly, lncRNA CEBPA-AS1 upregulation suppressed proliferation and motility and triggered apoptosis by diminishing the Notch pathway [39]. LncRNA CRNDE increased the proliferation and migrative and invasive ability of OS cells via the modulation of Notch-1 and EMT [40]. LncRNA SNHG7 facilitated tumor growth and EMT by targeting the miR-34a and Notch pathways in OS [41]. LncRNA NBR2 suppressed cell proliferation, invasion and migration and EMT via suppressing Notch-1 in OS cells [42]. Therefore, how Notch-1 is regulated by noncoding RNAs in OS cells needs to be further explored in the near future. In summary, Notch-1 promoted the viability and motility of OS cells by upregulating Cdc20 in OS cells.

MG63 and U2OS cells were grown in complete DMEM. OS cells were cultured overnight and transfected with Notch-1 cDNA, empty vector, control shRNA, Notch-1 shRNA or Cdc20 cDNA or a combination by Lipofectamine 2000 according to the instructions as previously described [20]. The CDC20 shRNA plasmid DNA (SHCLND-NM-001255) was purchased from Sigma Aldrich Company, and Notch1 shRNA plasmid (SC-36095-SH) was obtained from Santa Cruz Biotechnology Company. The transfected cells were further analyzed for biological functions.

The transfected OS cells were incubated in 96-well plates for 48 hours and 72 hours. The MTT assay was utilized to measure the viability of OS cells as previously described [21].

The transfected OS cells were incubated in six-well plates for 72 hours. Cells were collected and resuspended in binding buffer with propidium iodide and FITC-conjugated anti-Annexin V antibodies. The apoptosis rate was determined as described before [21].

The transfected OS cells were incubated in the top chamber of Transwell insert with serum-free medium. The bottom chamber was filled with complete medium. After 20 hours of incubation, calcein AM was employed to stain the invading cells for 1 hour. The invading cells were photographed by a microscope.

The transfected OS cells were incubated in 6-well plates until the cells covered the well. A yellow pipette tip was used to create a wound in the OS cells. After 16 hours and 20 hours, the wound area was photographed with a microscope.

The cells were lysed by protein lysis buffer after 72 hours post-transfection with cDNA or shRNA. The protein levels were examined by western blotting. The primary antibodies were incubated with the membranes at 4° C overnight. The expression level of target proteins was evaluated as described previously [20].

All data were analyzed by GraphPad Prism 5.0. ANOVA was utilized to analyze statistical significance. Each experiment was performed in triplicate. A value of P < 0.05 was considered statistically significant.

LB and GS conceived and designed the study. YG performed the experiments, data interpretation. YG and GS wrote the paper. All authors approved the manuscript.

This work is supported by a guidance project of Natural Science Foundation of the Liaoning Province (20180550547).