Both homoharringtonine (HHT) and curcumin exhibit anti-proliferative effects on lymphoma cells, but the effects of combined HHT and curcumin treatment remain unclear. Here, we investigated the effects of HHT/curcumin combination on the proliferation, apoptosis, and invasion in lymphoma cells. CCK-8, flow cytometry, and transwell assays were used to assess proliferation, apoptosis, and invasion of U937 and Raji cells. p-Smad3, E-cadherin, and N-cadherin expression were also measured in Raji cells using Western blot assays. Combination of HHT and curcumin synergistically inhibited U937 and Raji cell proliferation and invasion. In addition, the combination treatment markedly increased apoptosis of Raji cells as evidenced by increased Bax, cleaved caspase 3, and cleaved caspase 9 expression. Meanwhile, the combination treatment promoted anti-tumor mechanisms in Raji cells as indicated by decreases in p-Smad3 and N-cadherin and increases in E-cadherin. In vivo experiments showed that the combination treatment suppressed tumor growth in a mouse Raji xenograft model. Our findings indicate that combination of HHT and curcumin inhibited lymphoma cell growth by downregulating the TGF-β/Smad3 pathway. These results suggest that HHT combined with curcumin might be a promising therapeutic approach for the treatment of lymphoma.

Lymphomas are a heterogeneous group of lymphoid malignancies [1]. Mature lymphoid neoplasms are classified by the WHO as either non-Hodgkin’s lymphoma (NHL) or Hodgkin’s lymphoma (HL) [1, 2]. Burkitt’s lymphoma is a highly invasive NHL that primarily affects children and adolescents [3, 4]. Burkitt’s lymphoma is also an aggressive B cell acute lymphoblastic leukemia [5]. At present, chemotherapy, immunotherapy, and radiotherapy are used to treat lymphomas [6–8]. However, the prognosis of lymphoma patients remains poor due to chemoradiotherapy resistance [9, 10]. Therefore, the development of novel treatment strategies has become a major focus of research.

Homoharringtonine (HHT) is a compound that was initially extracted from the Cephalotaxus hainanensis Li plant used in traditional Chinese medicine [11]. HHT was approved by the US Food and Drug Administration (FDA) for treatment of patients with chronic myeloid leukemia in 2012 [12]. Since the 1970s, HHT has been used in the treatment of hematological malignancies in China [13, 14]. Nguyen et al. found that HHT combined with bortezomib could kill diffuse large B-cell lymphoma (DLBCL) cells [15]. In addition, Klanova et al. found that HHT significantly inhibited cell growth in murine xenograft models of DLBCL [16].

Curcumin is a polyphenol derived from the rhizomes of the Chinese medicinal herb Curcuma Longa L [17, 18]. Curcumin has strong anti-oxidative and anti-inflammatory activities [19], and studies have shown that curcumin exhibits strong anti-tumor effects on colorectal, prostate, breast, and gastric cancers [20–23]. Guorgui et al. found that curcumin exhibited an anti-proliferative effect in HL [24]. In addition, curcumin could be taken up by cells in a 1/20 ratio and then induced the apoptosis of cancer cells [25–28]. Although HHT and curcumin have shown anti-tumor effects in lymphoma cells, little is known about the effects of a combination of these two compounds.

Epithelial-mesenchymal transition (EMT) is an essential process for acquisition of aggressiveness and metastatic capacity in tumor, which is characterized by loss of epithelial markers (such as E-cadherin) and gain of mesenchymal markers (such as N-cadherin). [29]. In addition, transforming growth factor-beta1 (TGF-β1)/Smads signaling has been found to exert an important role in EMT [30]. Evidences have found that activation of TGF-β/Smad3 signaling pathway could promote the metastasis and EMT in tumor cells [31, 32]. In this study, we found that HHT combined with curcumin could exert tumoricidal effects in lymphoma cells in vitro and in vivo via inhibition of TGF-β/Smad3 signaling pathway. These results suggested that HHT combined with curcumin might be a promising therapeutic approach for the treatment of lymphoma. 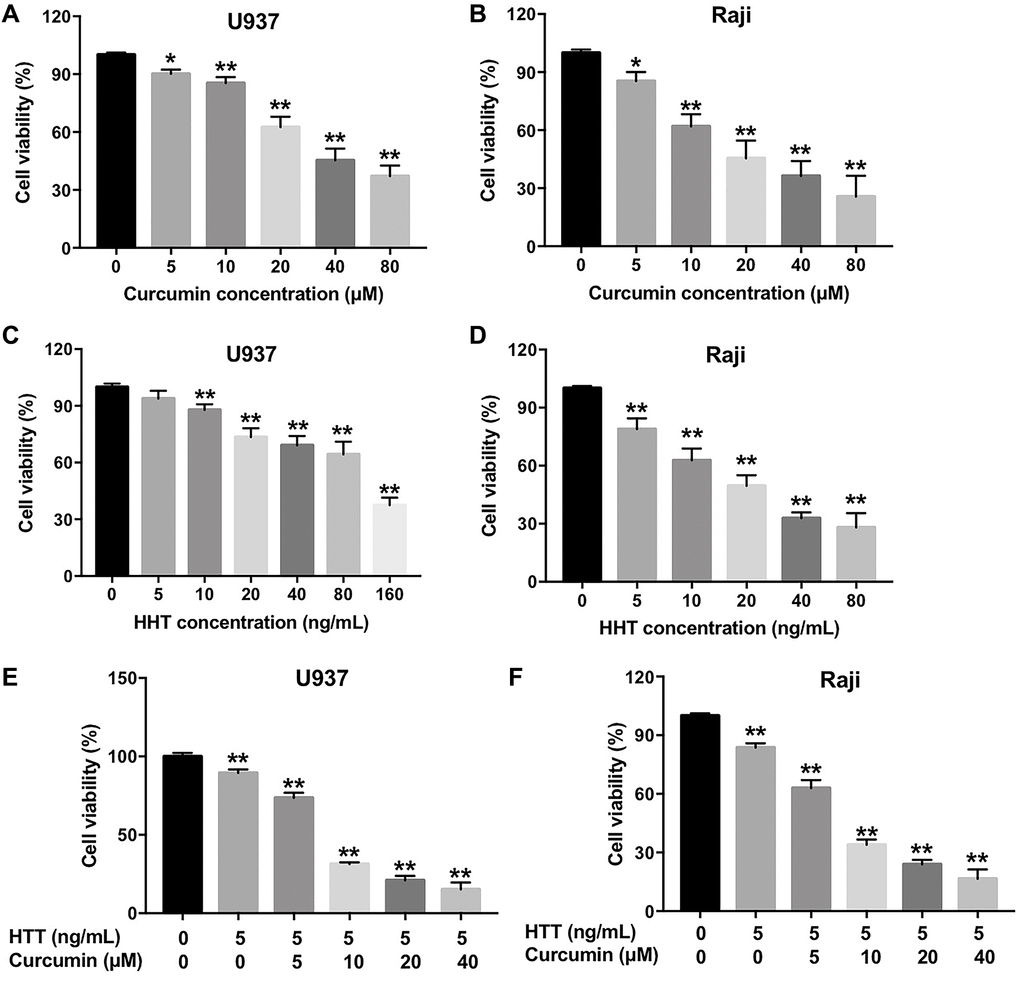 Table 1. Evaluation of combination of HHT with curumin in U937 and raji cells (72 h treatment). 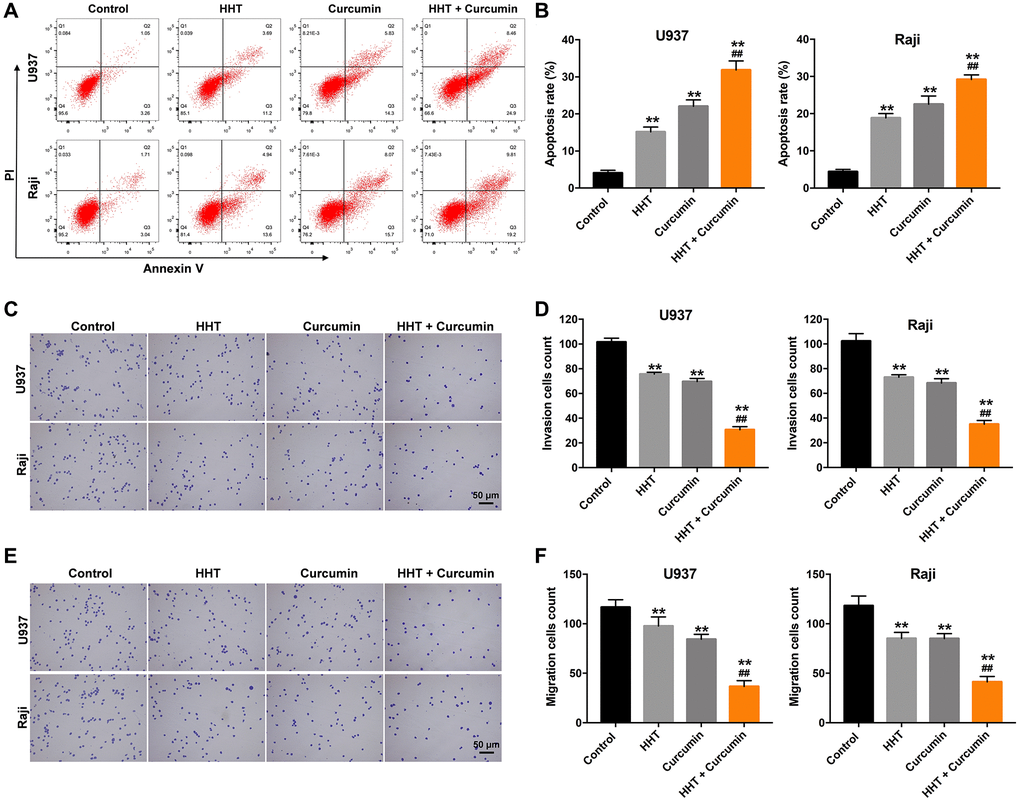 To assess whether lymphoma cell death induced by HHT/curcumin combination was accompanied by enhanced ROS generation, Raji cells were stained with DCFH-DA. As shown in Figure 3A, combination of HHT and curcumin remarkedly increased ROS generation in Raji cells (4.95 fold) and U937 cells (4.82 fold) compared to the HHT (1.38 fold and 1.39 fold, respectively) alone treatment group (Figure 3A). In addition, JC-1 staining indicated that the combination treatment obviously decreased MMP in Raji and U937 cells (Figure 3B). Meanwhile, combination of HHT and curcumin markedly increased Bax, cleaved caspase 3, and cleaved caspase 9 expression and decreased Bcl-2 expression in Raji cells (Figure 3C–3G). These data demonstrate that combination of curcumin and HHT induced apoptosis of lymphoma cells via the mitochondrial-mediated apoptosis pathway. 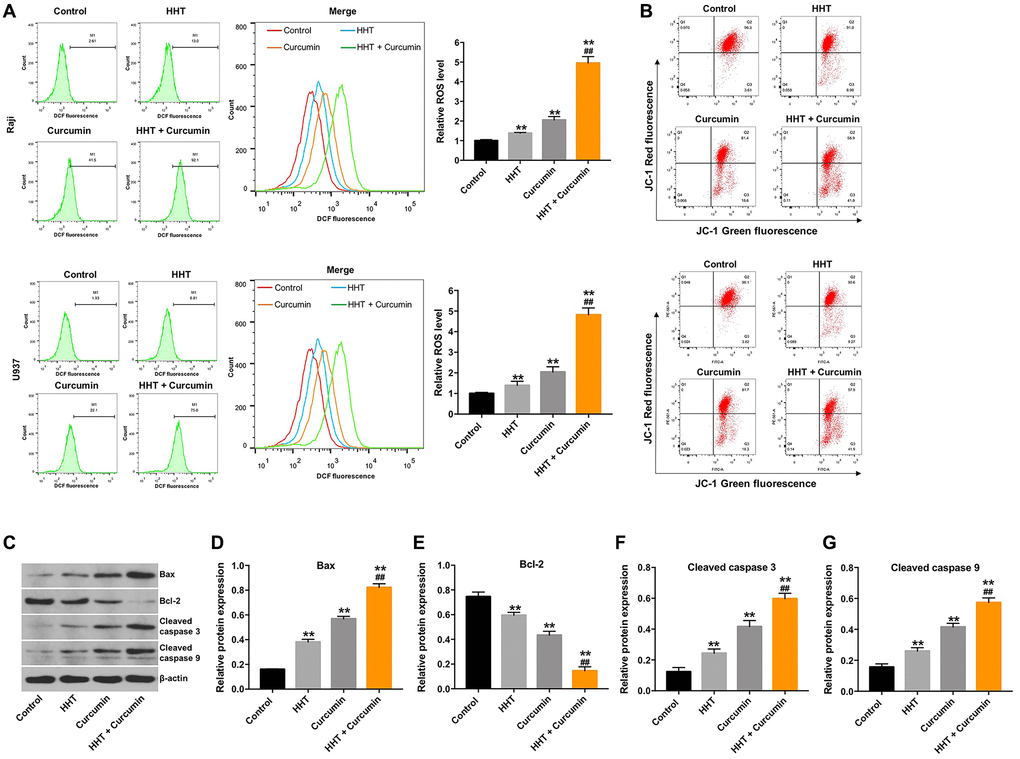 TGF-β/Smad signaling participates in various biological processes, including cancer cell growth, migration, and invasion [33]. We therefore assessed p-Smad3, E-cadherin, and N-cadherin expression in Raji cells using a Western blotting assay. As indicated in Figure 4A–4D, combination of HHT and curcumin significantly decreased p-Smad3 and N-cadherin levels and markedly increased E-cadherin levels in Raji cells. Meanwhile, the combination treatment decreased nuclear accumulation of Smad4 in Raji cells (Figure 4E and 4F). To investigate whether TGF-β signaling is involved in combination treatment-mediated lymphoma cell growth, rescue experiments were performed. As shown in Figure 4G, the inhibitory effect of combination treatment on the viability of Raji cells was reversed by the administration of TGF-β. These data suggest that combination of curcumin and HHT inhibited lymphoma cell growth by inhibiting the TGF-β/Smad3 signaling pathway. 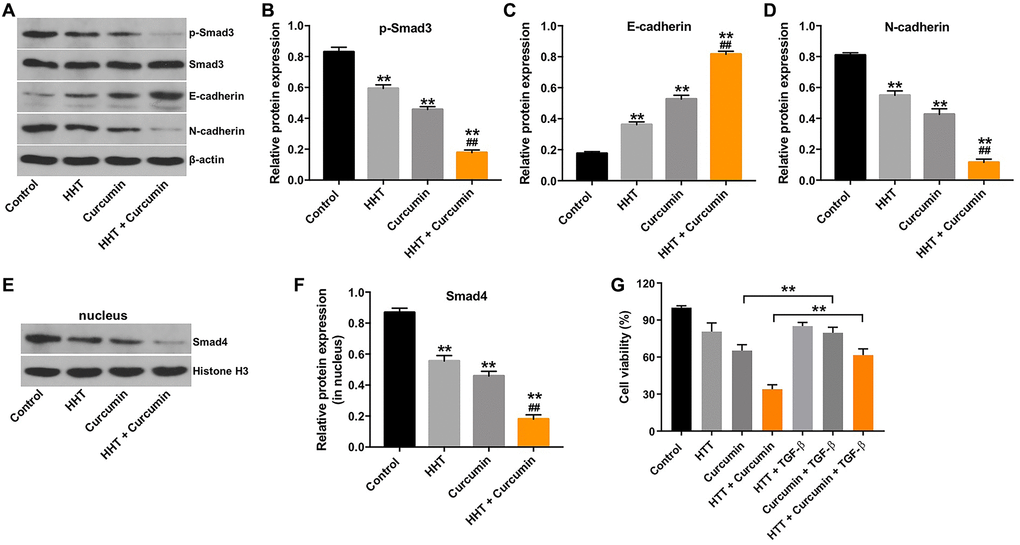 Next, we further assessed the effects of HHT combined with curcumin in a mouse Raji xenograft in vivo model. As shown in Figure 5A and 5B, the combination treatment markedly decreased the tumor volume and tumor weight of transplanted Raji tumors in vivo. In addition, a TUNEL assay revealed that combined treatment notably increased cell apoptosis in tumor tissues compared to the HHT alone treatment group (Figure 5C). Meanwhile, Western blots indicated that the combination treatment decreased the expressions of p-Smad3 and N-cadherin, increased the expression of E-cadherin, and reduced nuclear accumulation of Smad4 in tumor tissues (Figure 5D–5G). These results indicate that combination of curcumin with HHT inhibited tumorigenesis in Raji xenografts in vivo. 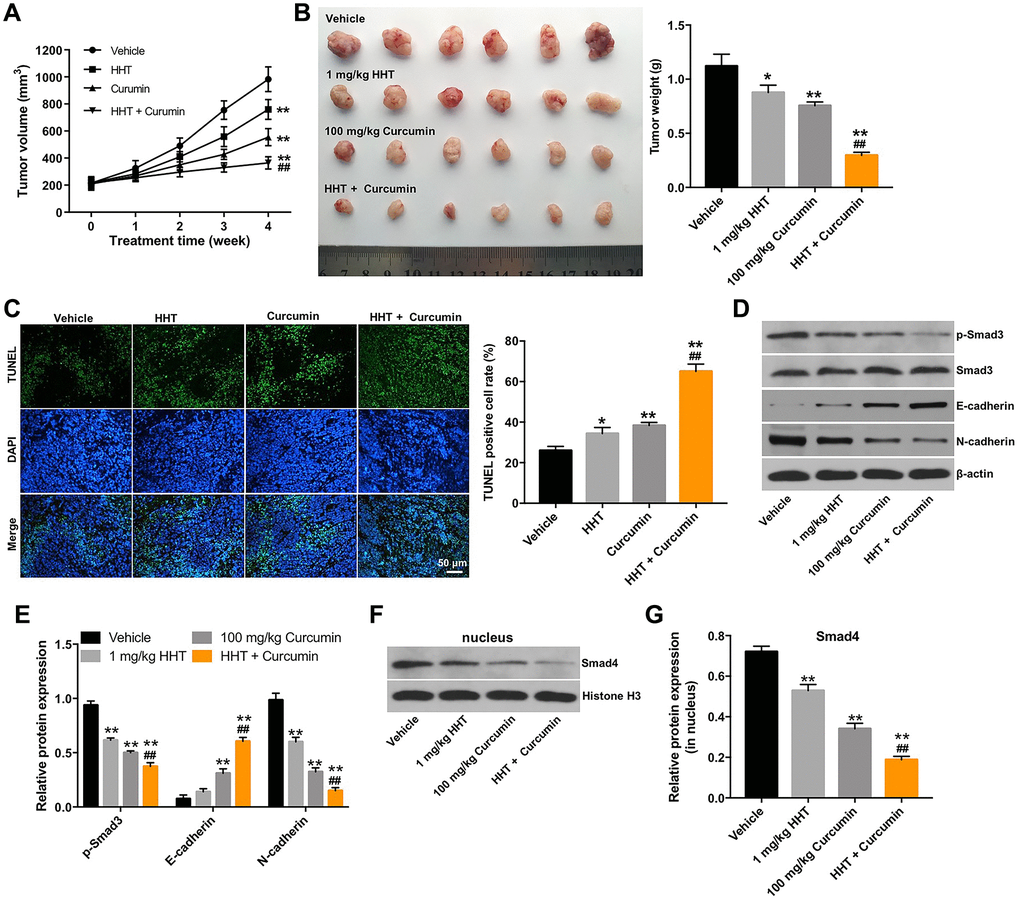 In this study, we found that combination of curcumin with HHT synergistically inhibited lymphoma cell proliferation. Moreover, this combination treatment suppressed migration and invasion and induced apoptosis of lymphoma cells by inhibiting the TGF-β1/Smad3 pathway.

HHT is widely used as an antineoplastic drug in the treatment of hematological malignancies [34]. In addition, curcumin inhibits lymphoma cell growth [35]. Previous studies have shown that combining anti-cancer agents can reduce the toxicity and improve the effectiveness of anti-cancer therapies [35, 36]. In particular, addition of curcumin can enhance the efficacy of conventional anticancer therapies [37, 38]. For example, Guo et al. found that curcumin increased the efficacy of doxorubicin treatment in lymphoma cells by inducing apoptosis [35]. In addition, Li et al. found that combination of HHT with triptolide synergistically inhibited KG-1a cell proliferation [39]. In this study, we found that combination of curcumin with HHT synergistically inhibited lymphoma cell proliferation. In addition, the combined treatment with HHT and curcumin induced apoptosis and inhibited invasive ability of lymphoma cells to a significantly greater extent than treatment with either curcumin or HHT alone. These data indicate that combination of curcumin and HHT could suppress lymphoma cell growth to a greater extent than either compound alone.

The Cell Counting Kit-8 (CCK8) (Dojindo Laboratories, Japan) was used to assess cell viability after 3 days of curcumin or HHT treatment. U937 and Raji cells (5 × 103 cells per well) were plated onto 96-well plates at 37°C, and 10 μL of CCK-8 reagent was added to each well followed by incubation for 2 h. Subsequently, a Multiskan™ FC Microplate Photometer (Thermo Fisher Scientific) was used to determine the optical density (OD) of each well at 450 nm.

The Chou–Talalay method was used to calculate combination index (CI) values for the drug combination [47]. U937 and Raji cells were exposed to solutions containing curcumin (0, 5, 10, 20, or 40 μM) combined with HHT (5 ng/mL). The CI value for the combination of curcumin and HHT in lymphoma was defined as CI = DA/ICx, A + DB/ICx, B [48].

Cell migration or invasion was examined using Matrigel-uncoated or Matrigel-coated transwell inserts (8 μm pore size, Corning, USA). U937 and Raji cells (4 × 104 cells/well) were suspended in 150 μL serum-starved culture medium and then added to the upper chambers, and the lower chambers were filled with 700 μL of DMEM medium containing 10% FBS. Twenty-four hours later, cells that had moved through the transwell membrane and invaded the lower chamber were fixed with 70% methanol and stained with 1% crystal violet. The migrated or invaded cells were imaged using a fluorescence microscope and counted in five randomly selected fields.

BALB/c nude mice (6–8 weeks old) were obtained from the Shanghai Slac Animal Center (Shanghai, China). Raji cells (5 × 106 cells resuspended in 50 μL PBS) were injected subcutaneously into the left flanks of nude mice. When tumor volumes reached 180 mm3, animals were randomized into four groups: vehicle, 1 mg/kg HHT, 100 mg/kg curcumin, or HHT + curcumin. The vehicle group received normal saline only. HTT was administered in daily intraperitoneal (ip) injections at 1 mg/kg. Curcumin was administered via oral gavage at 100 mg/kg/day. Tumor volumes were calculated based on caliper measurements every week. After four weeks, animals were sacrificed under anesthesia according to the recommended procedures of the National Institutes of Health Guide for the Care and Use of Laboratory Animals. All animal experiments were approved by the First Affiliated Hospital of Zhejiang Chinese Medical University.

All animal experiments were performed with approval from the First Affiliated Hospital of Zhejiang Chinese Medical University.

Yu Zhang conceived and supervised the study. Jingjing Xiang, Ni Zhu, Hangping Ge, and Xianfu Sheng designed the study. Shu Deng, Junfa Chen, Lihong Yu, and Yan Zhou performed the experiments and analyzed the data. Jianping Shen made substantial contributions to conception and design of the study and revised the manuscript critically for important intellectual content. All authors reviewed the results and approved the final version of the manuscript.