Copyright: © 2021 Xie et al. This is an open access article distributed under the terms of the Creative Commons Attribution License (CC BY 3.0), which permits unrestricted use, distribution, and reproduction in any medium, provided the original author and source are credited.

Gastric cancer (GC) is a prevalent malignancy with nearly 1 million new cases per year globally [1–4]. China has the highest incidence of GC, and more than 50% of cases occur in East Asia [5–7]. GC is the third leading cause of cancer mortality worldwide with over 720,000 deaths annually [7, 8]. Surgery remains the primary treatment strategy [3], but the 5-year survival rate is only 20-50% with surgery alone [9]. Even with multimodal treatment, the 5-year overall survival rate for patients with advanced GC is less than 5% [3].

Using the Gene Expression Omnibus (GEO) dataset, we compared the expression profiling of circRNAs between GC tissues and normal tissues. Differentially expressed circRNAs (DEcircRNAs) of GSE141977 were explored in vitro and in vivo.

Figure 1. Bioinformatics analysis to identify DEcircRNAs in GC. (A) Heat map indicating DEcircRNAs in GC tissue. (B) Volcano plot of DEcircRNAs. Highly downregulated and upregulated genes indicated in green and red, respectively. P-value < 0.05 (-log10 p-value > 1.3) and |log2(fold change)| > 1.5 were thresholds. (C) Survival analysis demonstrating the relationship between the level of FLNA (the host gene of hsa_circ_0091994) and survival rate of GC patients. 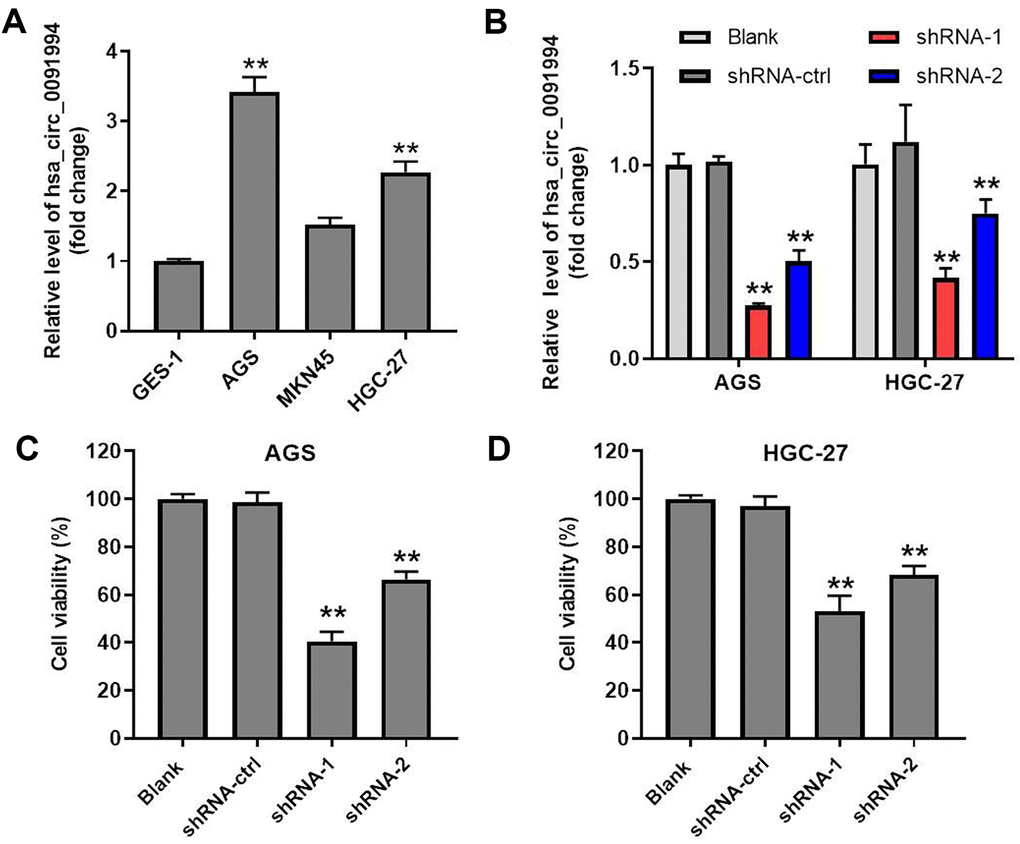 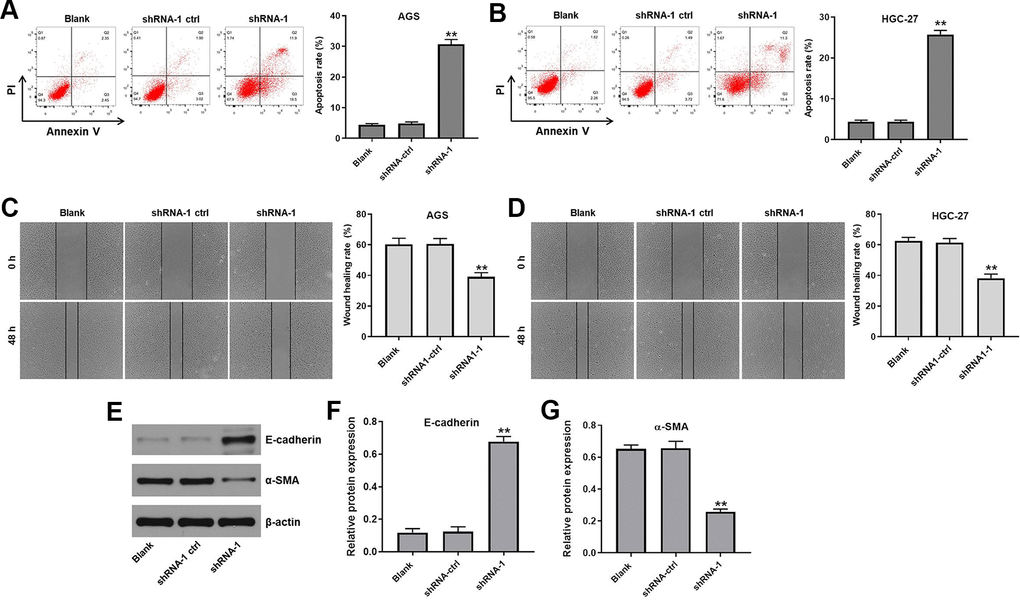 Figure 3. Hsa_circ_0091994 knockdown promoted the apoptosis and suppressed the wound healing activity in AGS and HGC-27 cells. AGS and HGC-27 cells were treated with shRNA-1 or shRNA-ctrl for 48 hr. (A, B) Cell apoptosis rate was measured in each group. (C, D) Wound healing assay was employed to evaluate the effect of hsa_circ_0091994 knockdown on wound healing activity of AGS and HGC-27 cell. (E) The protein expression of E-cadherin and α-SMA was examined using western blot assay. β-actin was used as a loading control. (F, G) The expressions of E-cadherin and α-SMA were quantified respectively. The**P<0.01, compared with blank; n = 3. 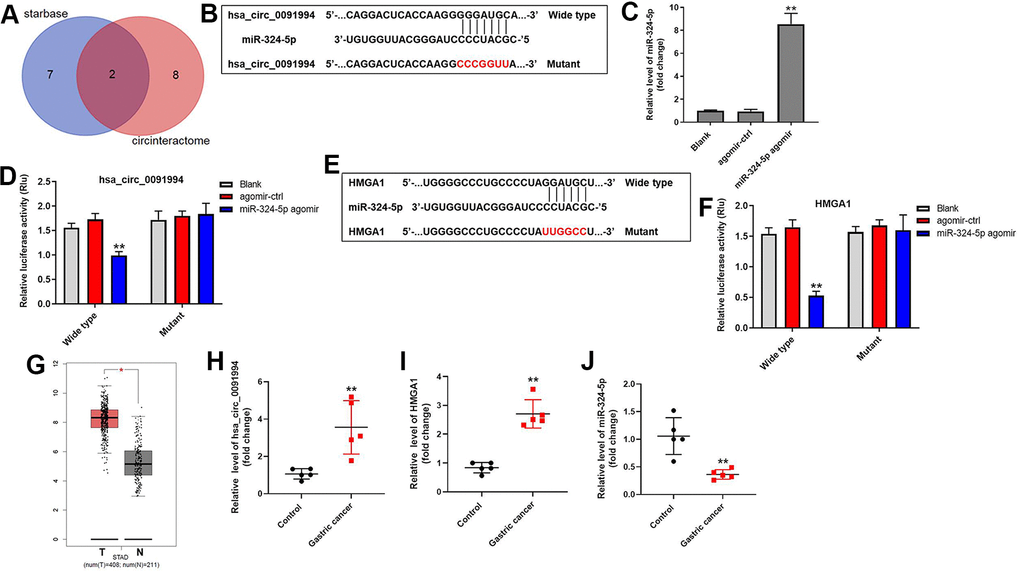 HMGA1 expression in GC tissue and adjacent normal tissue was analyzed using GEPIA tool based on the expression profile from TCGA database [20]. Bioinformatics analysis showed that HMGA1 was highly expressed in GC tumor tissue (Figure 4G). In addition, the expressions of hsa_circ_0091994 and HMGA1 in clinical gastric tumor tissues were notably upregulated, while the level of miR-324-5p was downregulated compared with that in adjacent tissues (Figure 4H–4J). All these data suggested hsa_circ_0091994 functions through regulating miR-324-5p/HMGA1 axis.

Rescue experiments were performed to verify the function of hsa_circ_0091994 in GC cells. Since hsa_circ_0091994 knockdown inhibited GC cell proliferation via suppressing the miR-324-5p/HMGA1 axis, HMGA1 overexpression (OE) and shRNA-1 vectors were co-transfected into AGS cells. HMGA1 OE reversed the decrease in cell viability that was induced by shRNA-1 (Figure 5A). Similarly, HMGA1 OE reversed the increase in apoptosis that was induced by shRNA-1 (Figure 5B). Protein expression of HMGA1, Bax, Bcl-2, and cleaved caspase-3 was examined by western blot (Figure 5C). The shRNA-1 decreased HMGA1 and Bcl-2 expression, and increased Bax and cleaved caspase 3 levels (Figure 5D–5G). However, HMGA1 OE reversed all of these effects (Figure 5C–5G). 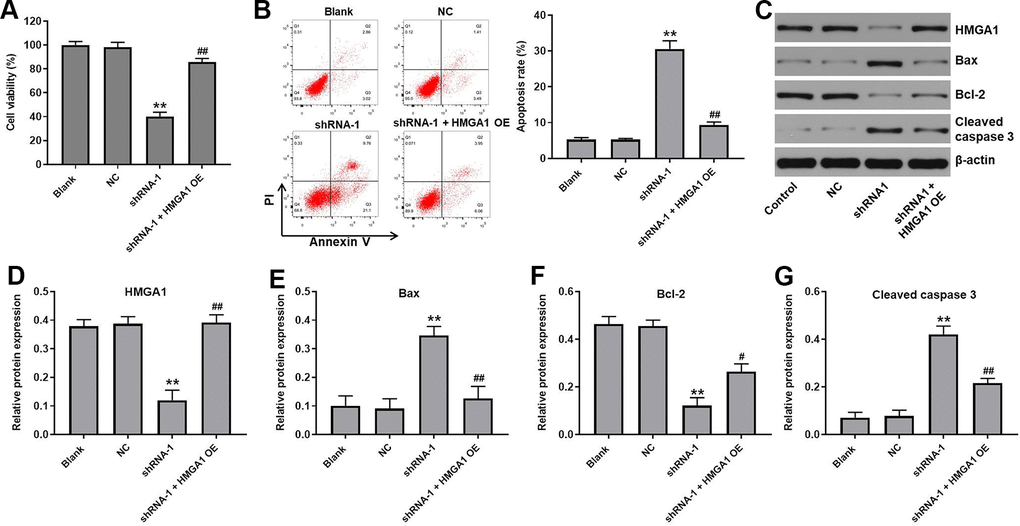 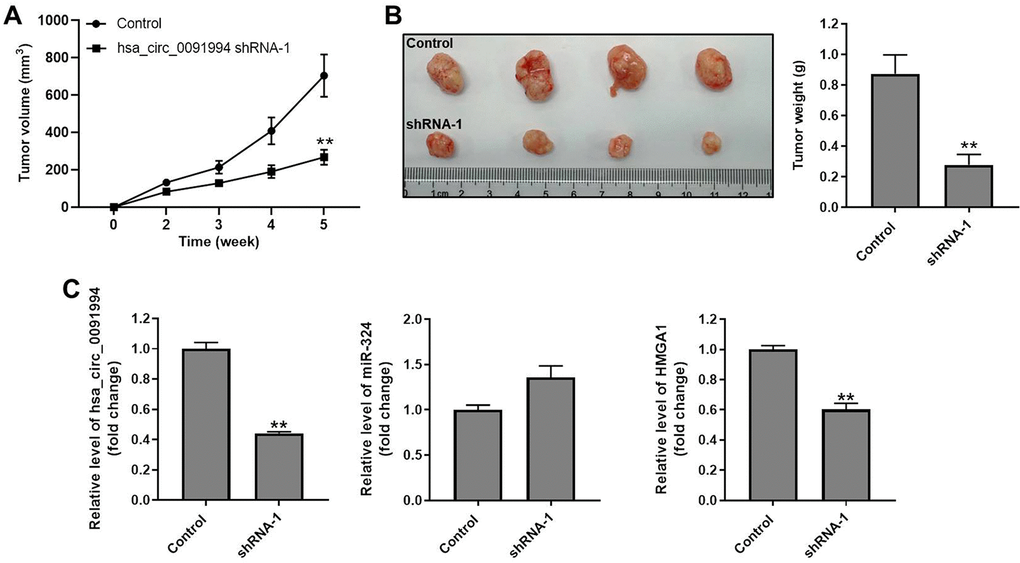 Gastric cancer (GC) patients typically have a poor prognosis [3, 4, 7, 9], and some circRNAs are biomarkers and therapeutic targets for cancer treatments [15–17]. We investigated hsa_circ_0091994 in vitro and in vivo because its parental gene FLNA expression was negatively associated with the overall survival of GC patients.

We found miR-324-5p was the downstream miRNA of hsa_circ_0091994 in GC, and increased miR-324-5p can inhibit GC progression [18]. Using StarBase database, we found HMGA1 to be the direct target of miR-324-5p, and HMGA1 has oncogenic activity in multiple cancers, including GC [21, 22]. Cell viability assay and a xenograft model showed that HMGA1 overexpression could reverse the anti-tumor effect of hsa_circ_0091994 knockdown in GC.

Hsa_circ_0091994 knockdown inhibited GC progression by suppressing the miR-324-5p/HMGA1 axis, which suggests hsa_circ_0091994 might serve as a novel therapeutic target for the treatment of GC.

The circRNAs expression data of GC tissues and matched normal tissues data were downloaded from the Gene Expression Omnibus (GEO, https://www.ncbi.nlm.nih.gov/geo/) under the accession number GSE141977. The differentially expressed circRNAs (DEcircRNAs) between GC tissues and normal tissues were analyzed and identified using R. P-value < 0.05 (-log10 p-value > 1.3) and |log2 Fold Change| > 1.5 was set as the threshold of significant DEcircRNAs. FLNA is the parental gene of hsa_circ_0091994. The association between the level of FLNA and the survival rate of patients with GC was analyzed using TCGA dataset (http://tcga-data.nci.nih.gov/tcga). GIEPIA (http://gepia.cancer-pku.cn/about.html) tool was employed to analyze the level of HMGA1 in GC tissue and normal gastric tissue.

The gastric cancer tissues and adjacent normal tissues were isolated from 5 patients with gastric cancer in Henan Provincial People's Hospital. Tissues were isolated and stored in liquid nitrogen immediately. The study was approved by the Ethics Committee of Henan Provincial People's Hospital, and the written informed consent from patient was documented.

Cell counting kit-8 (CCK-8) assay was carried out to evaluate cell viability. Cells from each group were treated, then the cells were placed into a 96-well plate at density of 5×103/ well. After 10 μl CCK-8 reagent (Beyotime) was added to each well, the cells were incubated with CCK-8 reagent at 37° C for 2 hr. The absorbance at 450 nm was determined using a spectrophotometer.

Wound scratch assay was employed to examine the wound healing activity of AGS cells and HGC-27 cells after indicated treatment. The cells were placed into 6-well plate at 5 x 105 cells/well. Once the cells created a confluent monolayer, scratches were created using sterilized 10 μL pipette tips. Then the cell monolayer was washed with PBS to remove cell debris. Wound gaps were photographed at 48 hr.

RNA pull-down experiment was conducted according to previous reference [23]. Briefly, M-280 Streptavidin magnetic beads (Thermo Fisher Scientific) were incubated with the biotinylated miRNA-324-5p probe and negative control probe for 2 h at room temperature. After that, gastric cancer cells were harvested and incubated with probe-coated beads at 4° C overnight. Finally, the RNA complexes were extracted with Trizol reagent (Thermo Fisher Scientific) and analyzed by PCR assay.

Six week old BALB/c nude mice were obtained from Vital River (Beijing, China) and randomized into the control group and hsa_circ_0091994 shRNA-1 group (n=6 per group). AGS cells were transfected with hsa_circ_0091994 shRNA-1 for 48 h and then subcutaneously injected into the right flanks of the mice. Tumor volume was measured using a caliper every week after inoculation (Figure 6A). At the end of week 5, the mice were sacrificed, and tumor tissue was harvested (Figure 6B). The tumor weight was measured immediately after sacrifice (Figure 6B). The tumor volumes were calculated using 1/2 (length × width2). Meanwhile, the levels of hsa_circ_0091994, miR-324-5p and HMGA1 in tumor tissues of mice were detected by RT-qPCR (Figure 6C).

The data were analyzed using GraphPad Prism 8.0 (GraphPad Software Inc., La Jolla, CA, USA). One-way analysis of variance (ANOVA) was utilized to examine the significance between groups. All data were presented as the mean ± SD. P < 0.05 was a statistical difference.

Ethics approval and consent to participate

All animal procedures were approved by the ethics committee of Henan Provincial People's Hospital. The principles of the NIH Guide for the Care and Use of Laboratory Animals were strictly followed.

This study was supported by Henan Provincial People’s Hospital.