Copyright: © 2021 Xie et al. This is an open access article distributed under the terms of the Creative Commons Attribution License (CC BY 3.0), which permits unrestricted use, distribution, and reproduction in any medium, provided the original author and source are credited.

Circular RNAs (circRNAs) are not translated into proteins [5, 6], and their aberrant expression has been suggested to promote, or suppress, tumorigenesis, including growth, metastasis, and progression [7]. The SMARCA5 gene - which encodes the circRNA SMARCA5 (circSMARCA5) - is located at chr4:144464662-144465125. Accumulating evidence suggests that circSMARCA5 is implicated in several cancer types, including glioblastoma multiforme, gastric cancer, hepatocellular carcinoma, and prostate cancer [8–10]. However, how circSMARCA5 is involved in prostate cancer metastatic transformation remains unknown.

MicroRNAs (miRNAs) are involved in many human malignancies and have been considered a therapeutic target due to their roles in the regulation of tumor cell behaviors [11]. circRNAs could sponge miRNA and control their expression, subsequently affecting their binding to mRNAs targets [12]. For instance, miR-181b-5p and miR-17-3p oncogenic roles in tumors proliferative, invasive, and metastatic capabilities were previously reported [13, 14]. Additionally, circSMARCA5 regulatory effect on miR-181b-5p and miR-17-3p in HCC was previously reported [10]. However, if circSMARCA5 regulates prostate cancer cells’ behaviors via miR-181b-5p and/or miR-17-3p sponging remains unknown. Therefore, we evaluated circSMARCA5 expression, role, and mechanism in the regulation of prostate cancer cells’ proliferative and invasive capabilities. 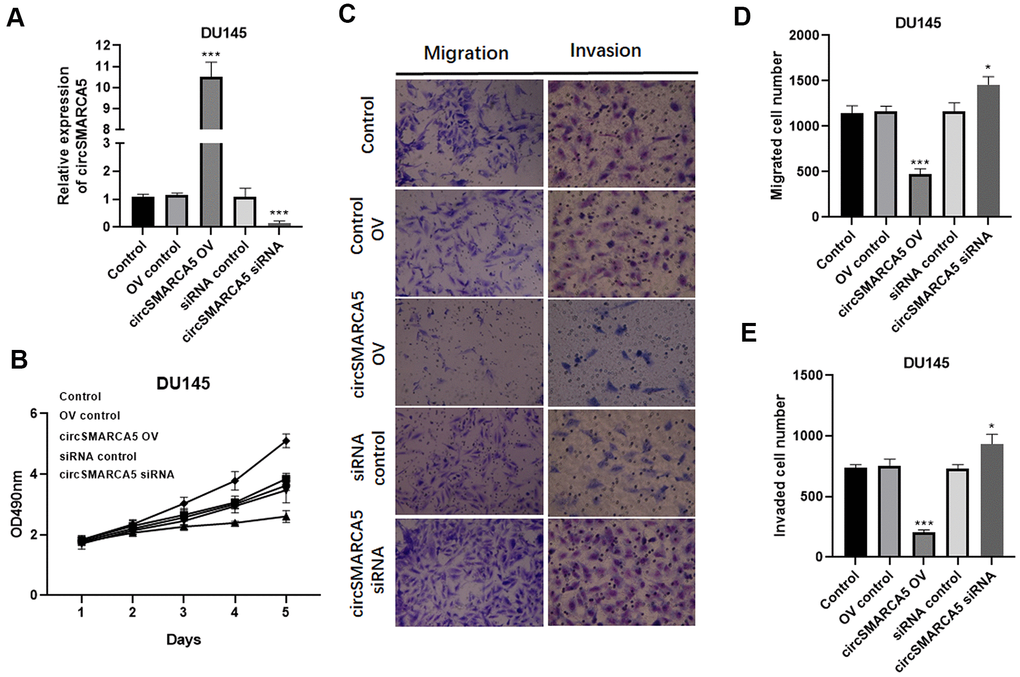 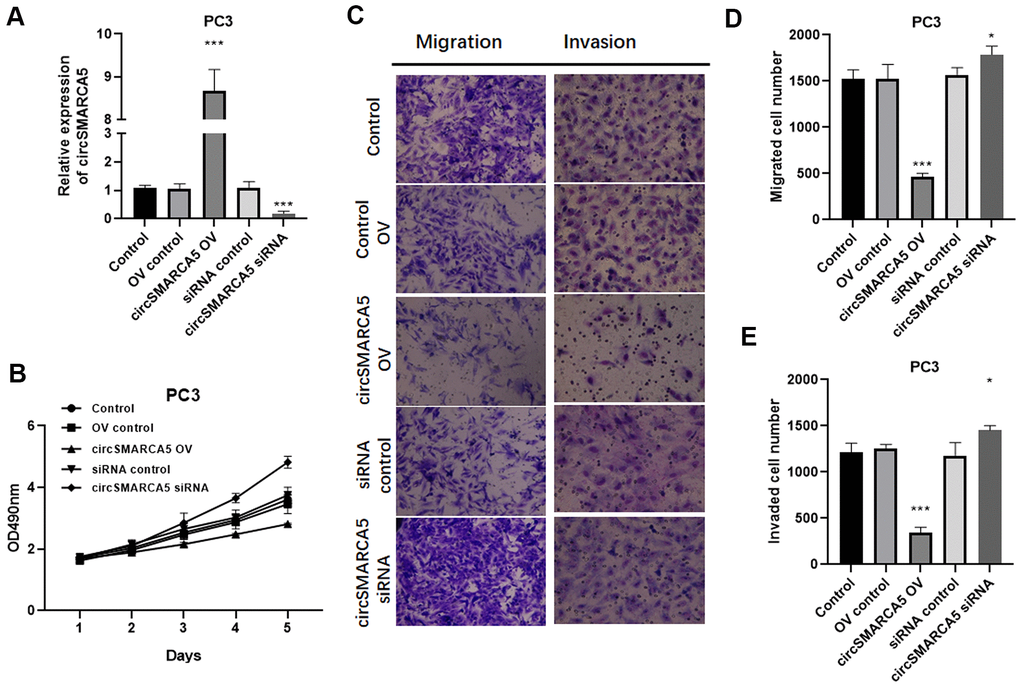 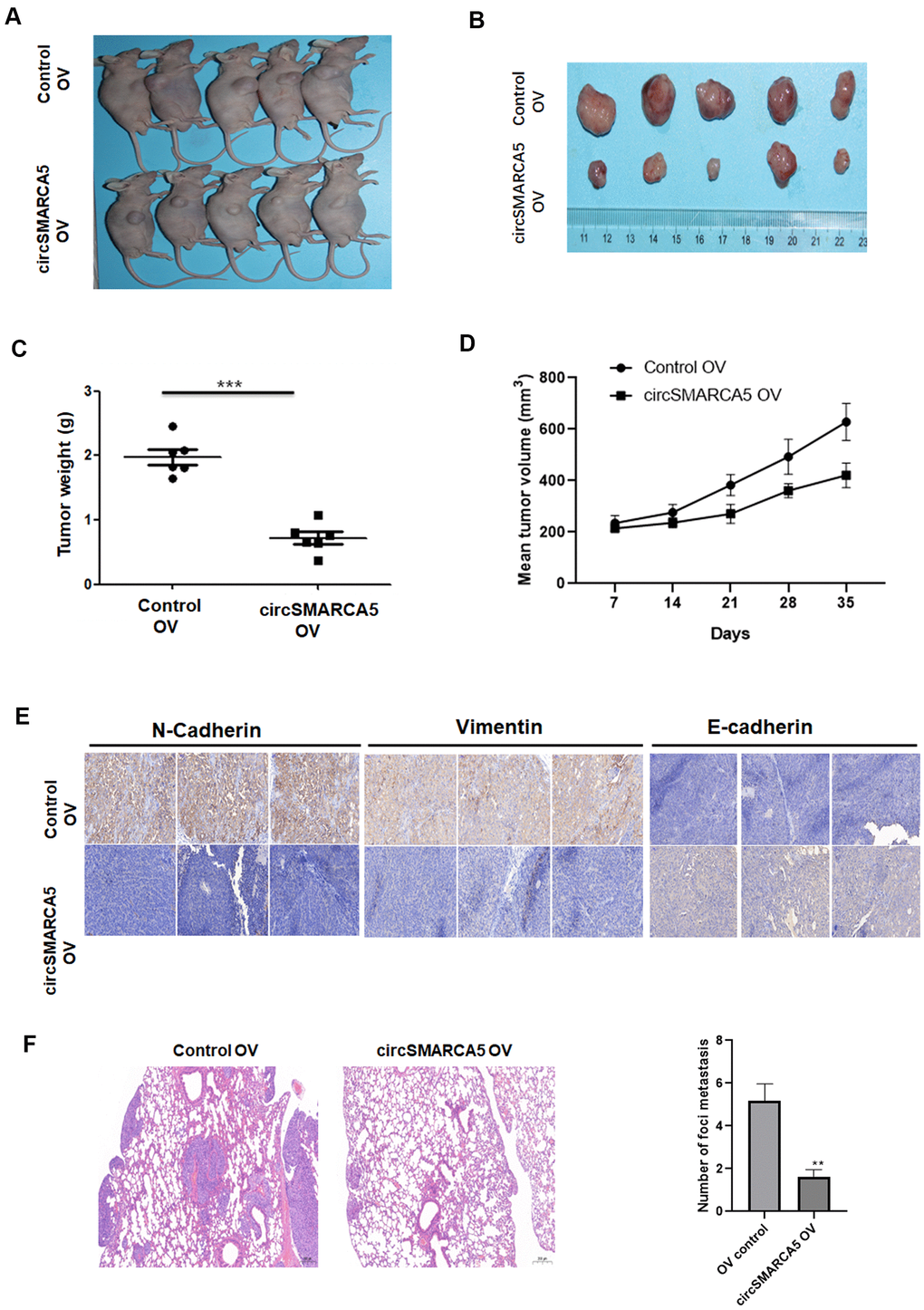 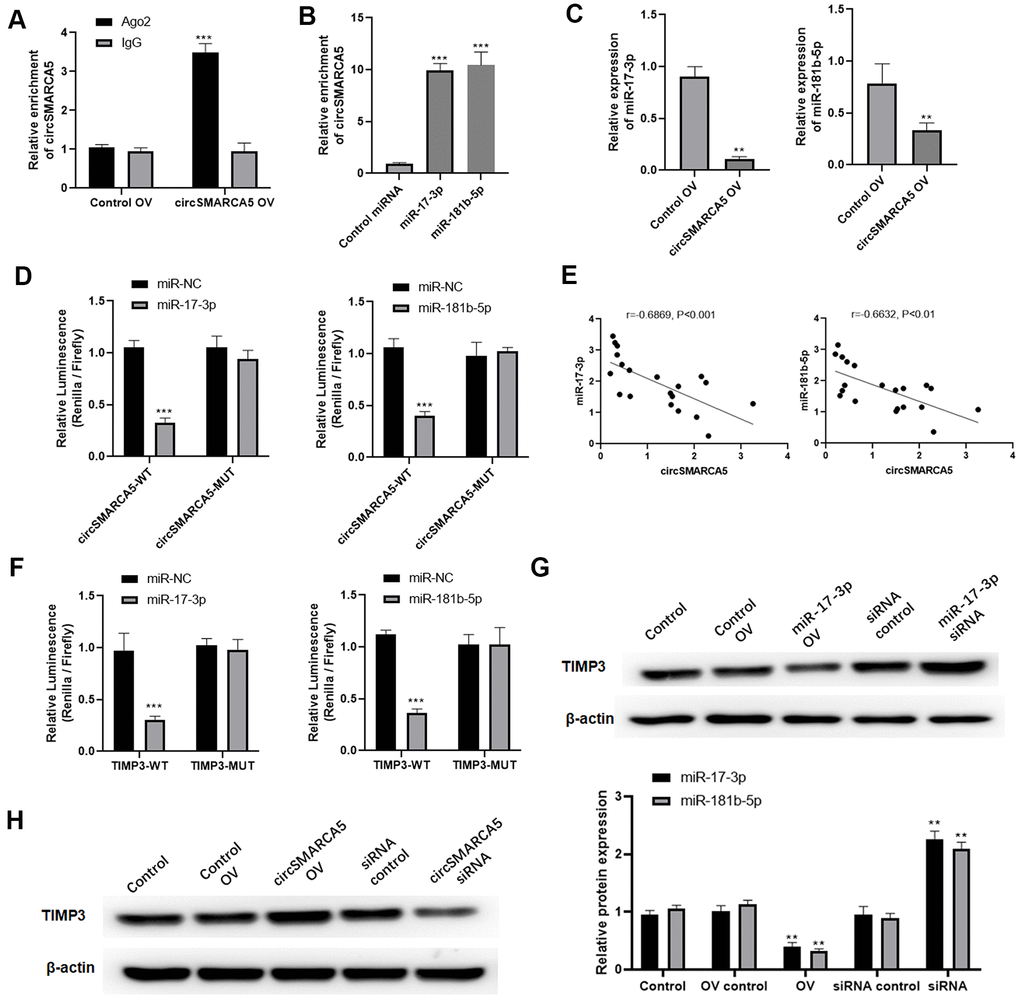 Figure 5. circSMARCA5 sponged miR-181b-5p/miR-17-3p to regulate TIMP3. (A) qRT-PCR for the pulled-down circSMARCA5. (B) qRT-PCR for circSMARCA5 enrichment in DU145 cell lysates. (C) qRT-PCR for miR-181b-5p and miR-17-3p. (D) Luciferase activities in the cells with indicated treatments. (E) Correlation between circSMARCA5 expression and miR-181b-5p, or miR-17-3p, in prostate tumor tissues. (F) Luciferase activities in the cells with indicated treatments. (G) Western blot for TIMP3 expression after overexpression or downregulation of miR-17-3p. (H) Western blot for the expression of TIMP3 after circSMARCA5 overexpression, or downregulation. *, **, *** represent p ≤ 0.05, p ≤ 0.01, p ≤ 0.001, respectively. Assays were performed at least three times. 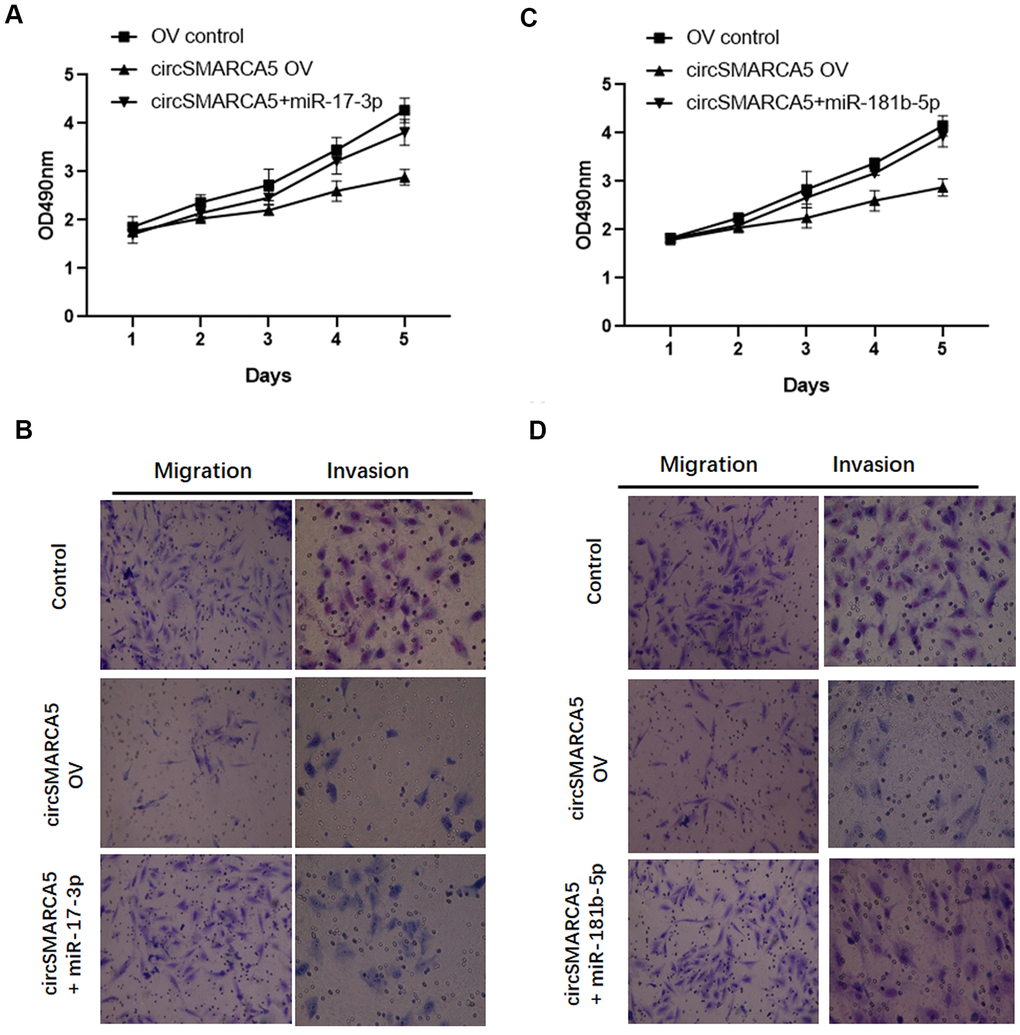 Furthermore, the mechanism underlying the circSMARCA5 decrease in prostate cancer cells was explored. Our previous study focused on KAT5's effects on prostate cancer pathogenesis [15]. Currently, compared to the control prostate epithelial cells RWPE-1, the KAT5 level was significantly decreased in DU145, LNCaP, and PC3 cells (Figure 7A). To explore the interaction between KAT5 and circSMARCA5 formation, RIP assays with a KAT5 antibody revealed significant circSMARCA5 enrichment in the anti-KAT5 immunoprecipitants, compared to those in IgG controls (Figure 7B). Next, we determined if KAT5 could regulate the circSMARCA5 biogenesis. Results from qRT-PCR showed that KAT5 increased the circSMARCA5 production (Figure 7C), suggesting that KAT5 binds to circSMARCA5 and induces its biogenesis. 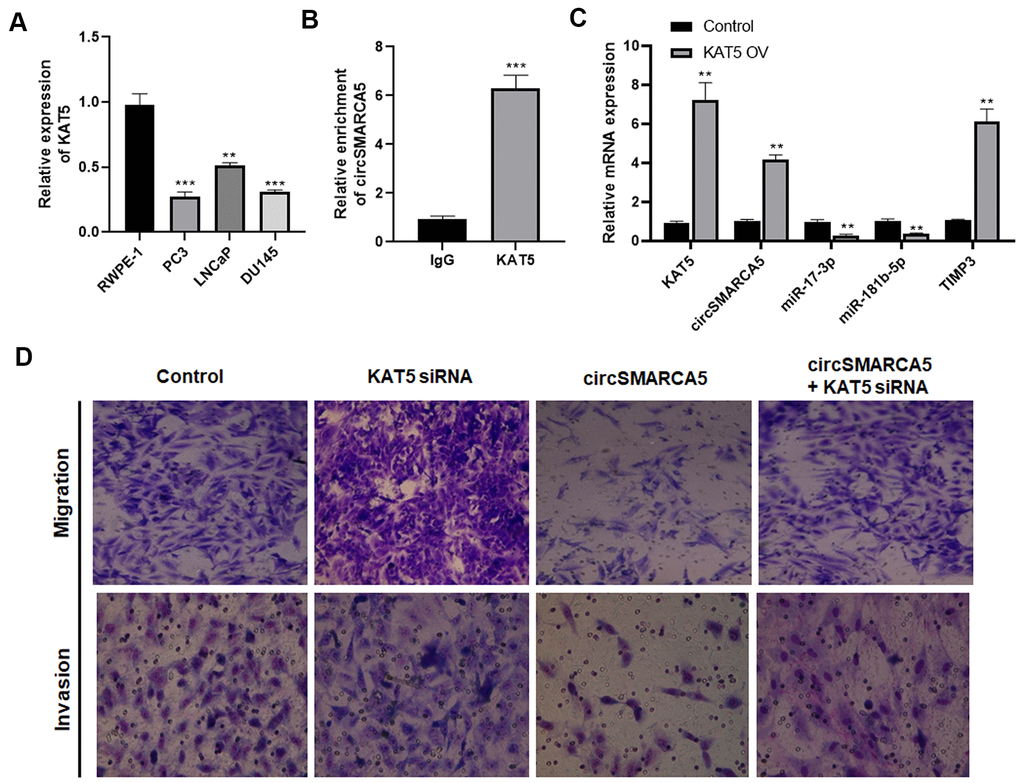 To evaluate the KAT5 effect on circSMARCA5-regulated cellular behaviors, DU145 cells were transfected with circSMARCA5-expressing vector, KAT5 siRNA, or their negative controls. As a result, KAT5 silencing promoted migrative and invasive capabilities and restored their inhibition induced by circSMARCA5 overexpression (Figure 7D). Collectively, these results suggested that KAT5-mediated circSMARCA5 biogenesis affects the circSMARCA5-miR-181b-5p-TIMP3 and/or circSMARCA5-miR-17-3p-TIMP3 axis in prostate cancer cells.

circSMARCA5 is implicated in the tumorigenesis of different cancers [9, 10]. However, the circSMARCA5 biological relevance in prostate carcinogenesis and metastatic transformation was unknown. In this study, we demonstrated that the circSMARCA5-miR-181b-5p/ miR-17-3p-TIMP3 axis is critical in prostate cancer development.

circRNAs can play diverse roles such as RNA-binding proteins, miRNA sponges, and transcriptional regulators [21]. For instance, circ-Sirt1 can sponge the miR-132/212 cluster to alleviate their suppressive effects on SIRT1 expression [22]. circSMARCA5 sponges the miR-19b-3p, leading to invasion, migration, and growth inhibition in NSCLC cells [14]. Through bioinformatics analysis, we predicted the interacting miRNA and its regulated target gene. Consequently, miR-181b-5p and miR-17-3p had conserved circSMARCA5 binding sites and were shown to be onco-miRNAs with proliferative, invasive, and metastatic potential in tumor cells [13, 14]. Additional results confirmed that circSMARCA5 could sponge miR-181b-5p and miR-17-3p. TIMP3 is a tumor-suppressive factor that if lost will accelerates tumor invasion and metastasis in prostate cancer [23]. Thus, we further identified that TIMP3 can be targeted by miR-181b-5p and miR-17-3p, implying a regulatory role of the circSMARCA5-miR-181b-5p-TIMP3 and/or circSMARCA5-miR-17-3p-TIMP3 axis involved in prostate cancer progression. Indeed, we found that miR-181b-5p or miR-17-3p attenuated the circSMARCA5 inhibitory role on tumor cell migration and invasion, validating that circSMARCA5 could sponge miR-181b-5p, as well as miR-17-3p, to promote TIMP3 and inhibit malignant behaviors in prostate cancer.

Patients (n = 20) who underwent radical prostatectomy for primary, metastatic, and benign prostate cancer, and prostate transurethral resected patients were enrolled in this study. The Ethics Committee of Shanghai Jiao Tong University approved all procedures. RPMI1640 medium was used to culture the DU145, PC3, and LNCaP cells. The K-SMF medium was used for RWPE-1 cells.

The circSMARCA5-containing vector, the miR-181b-5p mimic, or miR-17-3p mimic, KAT5 siRNA (5’-CAAGTGTCTTCAGCGTCATTT-3’), and their respective negative controls were transfected, or co-transfected, via lentivirus-mediated transfection system. Lipofectamine 2000 (Thermo Fisher, MA, USA) was employed in the lentiviruses package. Finally, viruses were purified, then infected the cells.

First, prostate cancer cells were seeded (4 × 103). Then, the tetrazolium compound (MTS; Promega, USA) was employed to determine cell growth. The values were determined at 490 nm after a 2-hour incubation at 37° C.

After fixation with 10% PFA, tumor tissues were cut into 5 mm-thick sections. Slides were heated in a dry oven, deparaffinized, rehydrated through graded ethanol, and microwaved in 10 mM citric acid buffer (pH 6.0). Nonspecific binding was blocked with 10% goat serum and the primary antibodies against N-cadherin (#4061, CST, USA), vimentin (#5741, CST, USA), or E-cadherin (#3195, CST, USA) were incubated at 4° C overnight. Finally, the slides were incubated with horseradish peroxidase-labeled streptavidin for targeted proteins detection.

To evaluate migrative and invasive capabilities, a Transwell plate was employed. Cells were plated into the top part of the chambers. The Matrigel was used to coat the chambers to determine the cell’s invasive capability with indicated treatment. The normal medium was added to the bottom part of the Transwell plate. After 48-hour incubation, methanol was used to fix cells that migrated, or infiltrated, to the bottom of the champers. Finally, fixed cells were observed after crystal violet staining using a microscope.

The Animal Ethics Committee of Shanghai Jiao Tong University reviewed and approved all procedures in this study. To induce the tumor xenograft murine model, 5 × 107 DU145 cells were subcutaneously injected into nude mice. Additionally, mice were intraperitoneally injected with tumor cells for metastasis assessment. Tumors size was monitored once a week, and the formula length X width2 was employed to calculate its volume. For Hematoxylin and Eosin (H&E) staining, lung tissues were sectioned and fixed with 10% PFA and stained with H&E, based on standard protocols.

The Biotin-labeled circSMARCA5 used in this study was synthesized by Sangon Biotech (Shanghai, China). After circSMARCA5 overexpression, cells were washed with PBS and fixed with 1% formaldehyde. Then, cells were incubated with streptavidin Dynabeads (Invitrogen, USA). The precipitated RNA was used to detect the targeted RNA by qRT-PCR. This experiment was repeated at least three times.

All values are shown as means ± standard deviations (S.D.). The Student’s t-test was performed to determine the differences between indicated groups. A p < 0.05 was considered statistically significant.

This study was supported by the National Natural Science Foundation of China (General Program, 81972494).