Copyright: © 2021 Song et al. This is an open access article distributed under the terms of the Creative Commons Attribution License (CC BY 3.0), which permits unrestricted use, distribution, and reproduction in any medium, provided the original author and source are credited.

In 2018, renal cell cancer (RCC), which is the most common and lethal urological malignancy, accounted for 403,262 new cases and 175,098 deaths worldwide [1]. In 2019, RCC accounted for nearly 73,820 new cases and 14,770 deaths in the United States [2]. The incidence of RCC has risen gradually over the last two decades, and nearly 30% of ccRCC patients are diagnosed with metastatic cancer [3, 4]. Clear cell renal cell carcinoma (ccRCC) accounts for the majority of RCC-related cases and deaths [5]. There have been significant improvements in RCC treatments in the last decade, including tyrosine kinase inhibitors (TKIs) that the availability of specific molecular target drugs, such as sunitinib, but, the prognosis of advanced ccRCC patients remains very poor [6]. In addition to late diagnosis, the survival rates of advanced ccRCC patients are poor because majority of patients develop drug resistance after a brief period of remission [7]. Therefore, new and more effective biomarkers that can predict metastasis or drug resistance are urgently required to improve survival rates of ccRCC patients with metastatic cancer and drug resistance.

DAPK1 gene is conserved in the evolution of many invertebrates, chordates and mammals, and belongs to a family of serine-threonine kinases that also includes DAPK2, DAPK3, DRAK1, and DRAK2 [8]. DAPK1 is a calcium/calmodulin–regulated (CaM-regulated) protein kinase that induces apoptosis in response to various stimuli such as IFN-γ, TNF-α, and TGF-β [9–11]. DAPK1 is a pivotal component in the endoplasmic reticulum (ER) stress-induced cell death pathway [12]. It mediates ER stress signaling and activates autophagy as well as caspase-dependent cell death in response to multiple intracellular and extracellular stimuli [13, 14]. Previous studies also show that DAPK1 is a tumor suppressor gene that inhibits tumor growth and metastasis by promoting apoptosis and autophagy [15]. The functional role of DAPK1 in renal cancer growth, progression and drug resistance has not been reported. Therefore, in this study, we investigated the prognostic significance of DAPK1 and its role in the sunitinib resistance mechanisms in ccRCC patients. 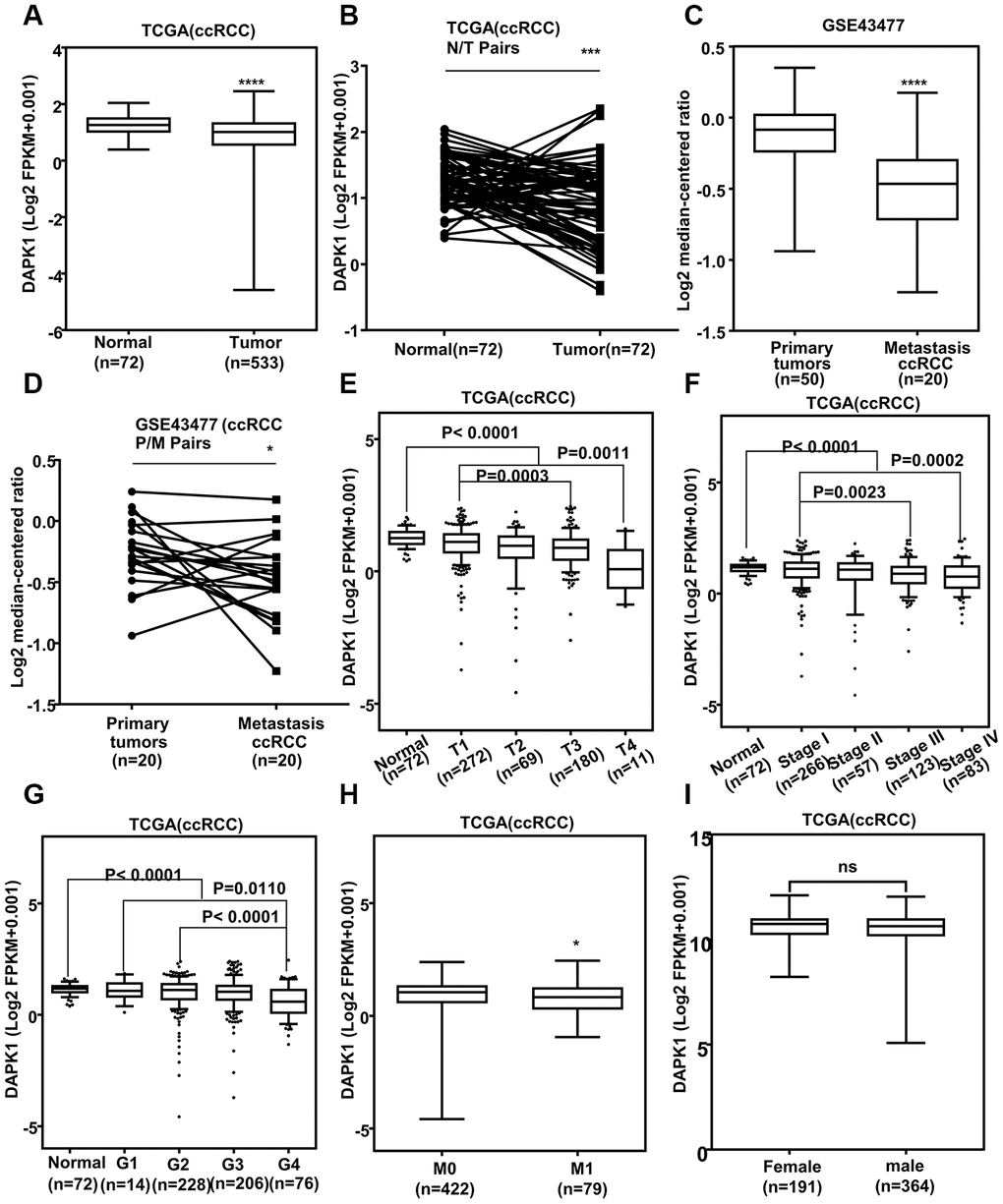 DAPK1 is a prognostic biomarker in ccRCC patients 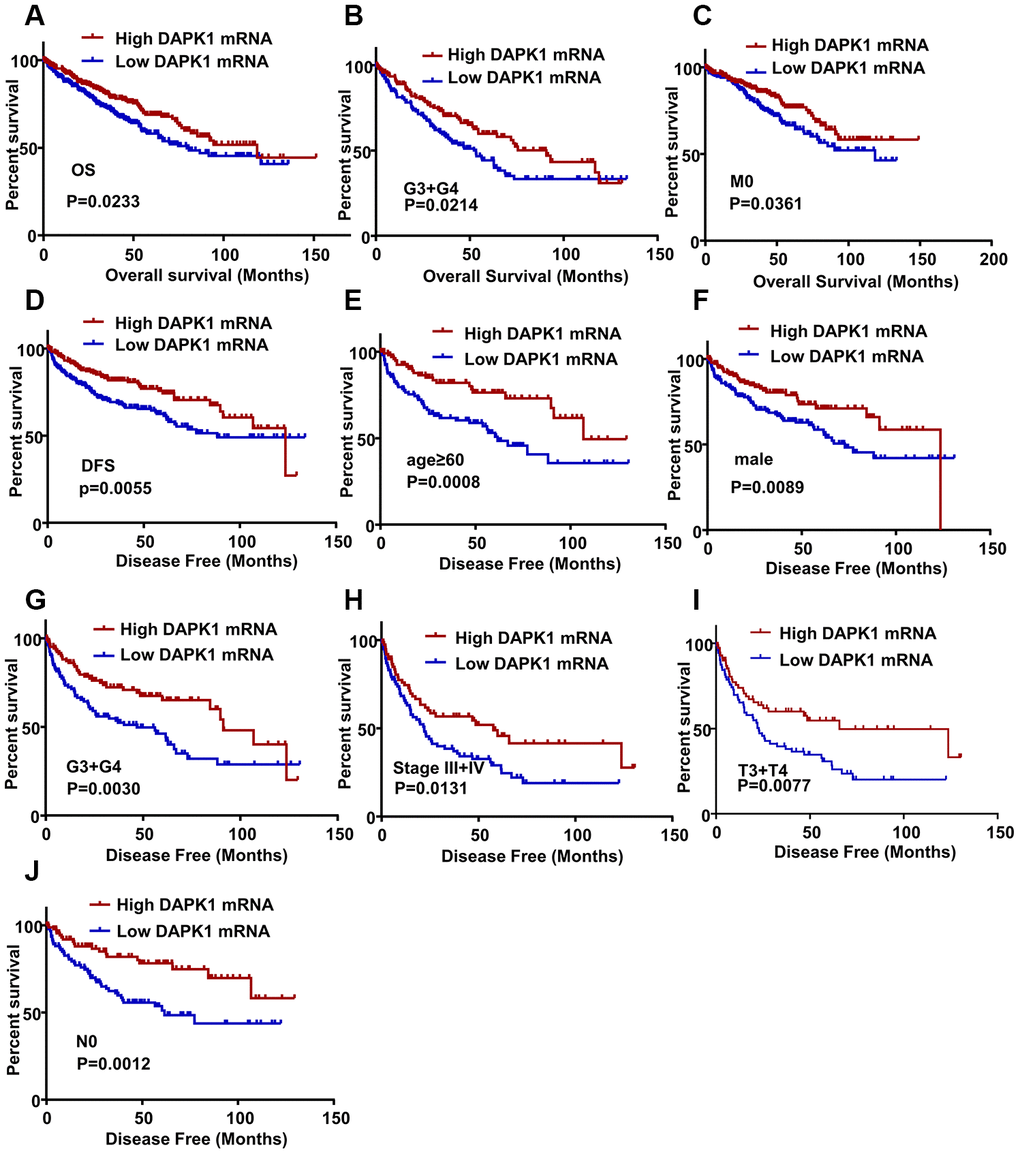 DAPK1 is a potential diagnostic biomarker in ccRCC patients 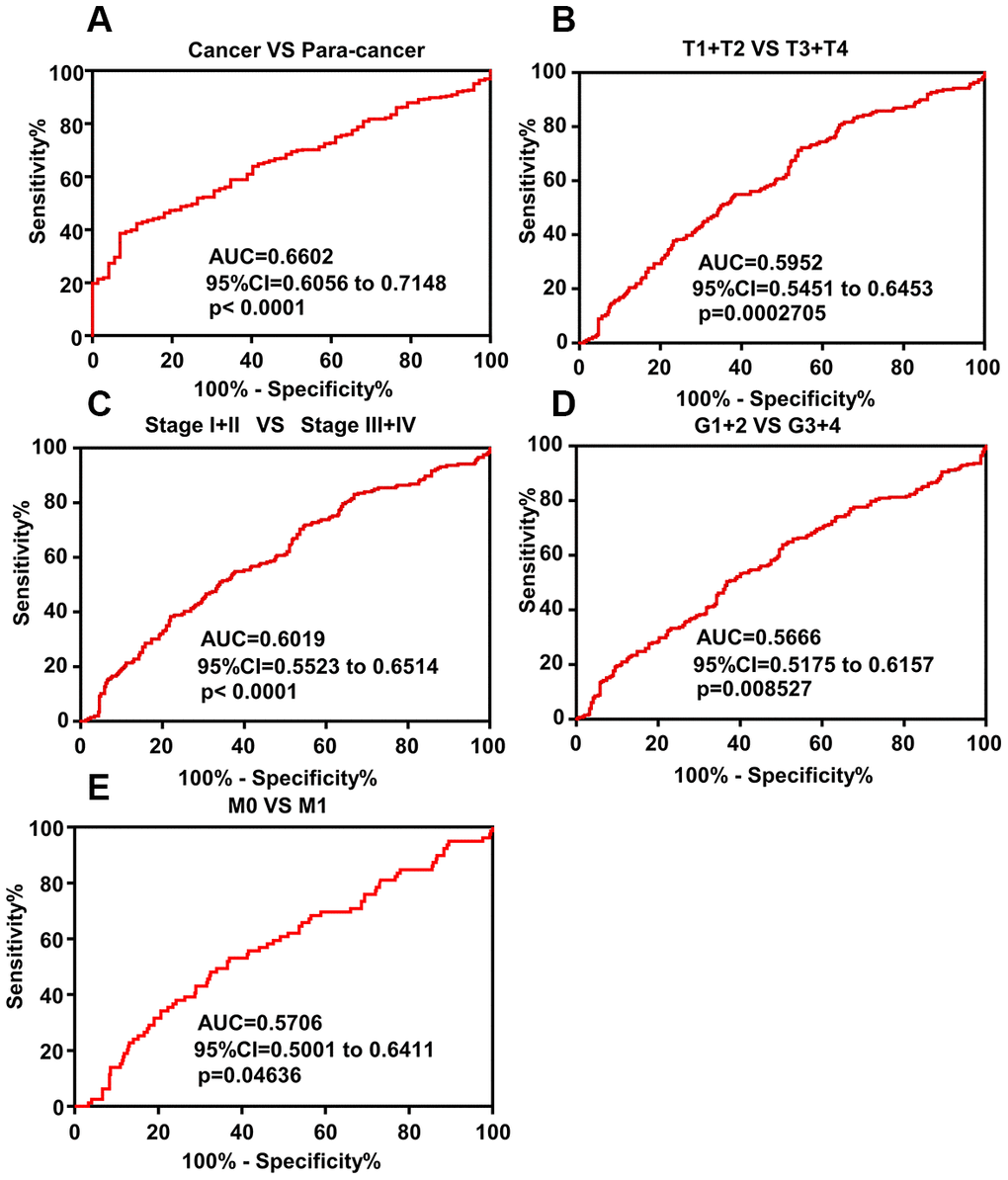 Table 2. Univariate and multivariate analyses of clinicopathological factors that correlate with disease-free survival of ccRCC patients. 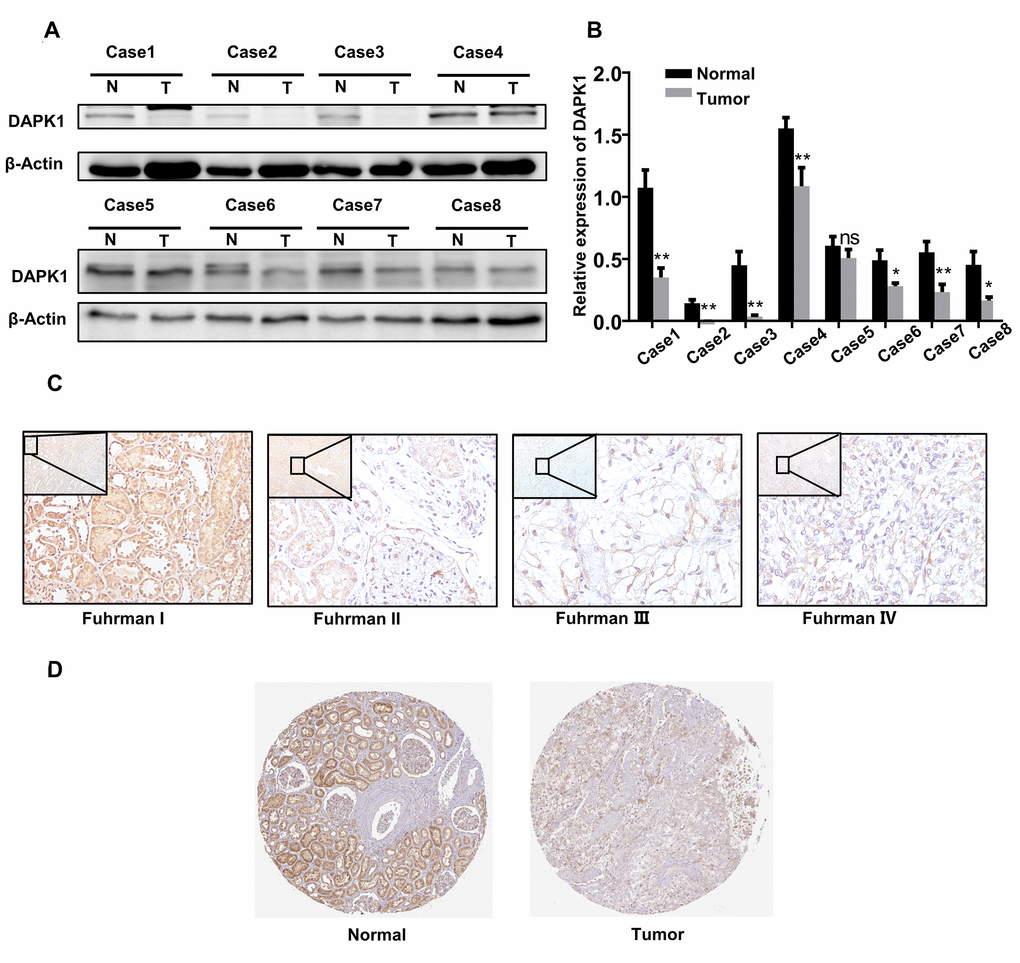 Biological function of DAPK1 in ccRCC

Next, we analyzed the ccRCC transcriptome data from the TCGA database to determine the biological function of DAPK1. GO analysis of genes that negatively correlate with DAPK1 expression (r < -0.3) showed that these genes were associated with signal pathways related to cellular growth, cell proliferation, endoplasmic reticulum, mitochondrion and others (Figure 5A–5C). Gene set enrichment analysis (GSEA) showed that low DAPK1 expression was associated with upregulation of pathways related to metastasis, drug resistance, hypoxia and invasiveness (Figure 5D). Protein-protein interaction (PPI) network analysis showed that DAPK1 was associated with apoptosis and negative feedback regulation of the MAPK pathway (Supplementary Figure 1B). 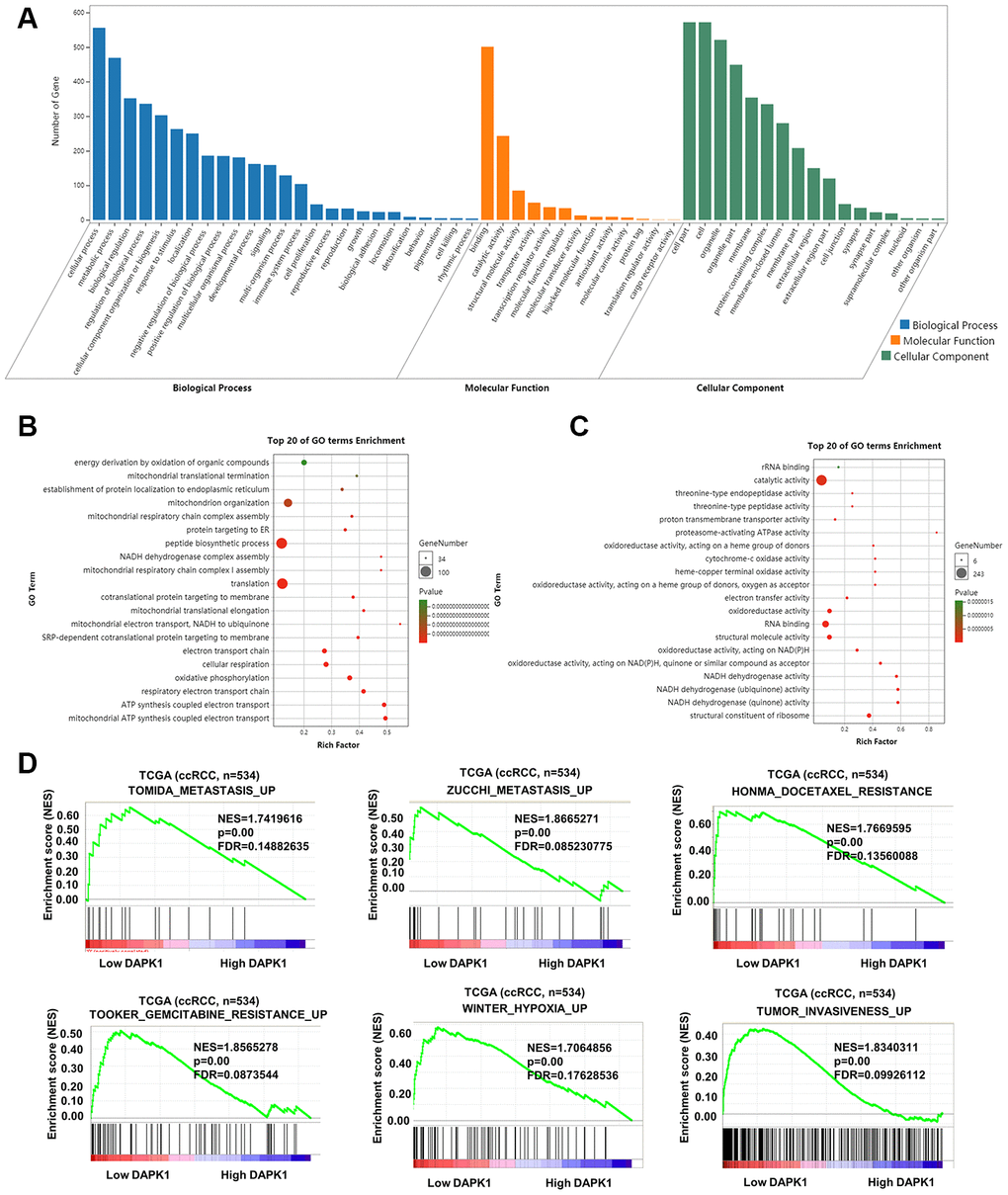 Figure 5. Functional enrichment analysis of genes related to DAPK1 in ccRCC tissues. (A–C) GO enrichment analysis shows the biological processes, molecular functions and cellular components that represent genes that negatively correlate with DAPK1 expression based on the transcriptome analysis of the TCGA-KIRC dataset. (D) GSEA show that genes upregulated because of DAPK1 downregulation in ccRCC include those that promote metastasis, drug resistance, hypoxia, and invasiveness. Note: ***p<0.001, **p<0.01, *p<0.05.

Since we observed a close relationship between DAPK1 and metastasis as well as drug resistance in ccRCC patients, we analyzed DAPK1 expression in two sunitinib-resistant cell lines, 786-O-R and ACHN-R [16] by western blotting and immunofluorescence assays. The results showed that DAPK1 protein levels were significantly lower in the 786-O-R and ACHN-R cells compared to their corresponding parental cell lines, 786-O and ACHN, respectively (Figure 6A–6B; Supplementary Figure 1C). 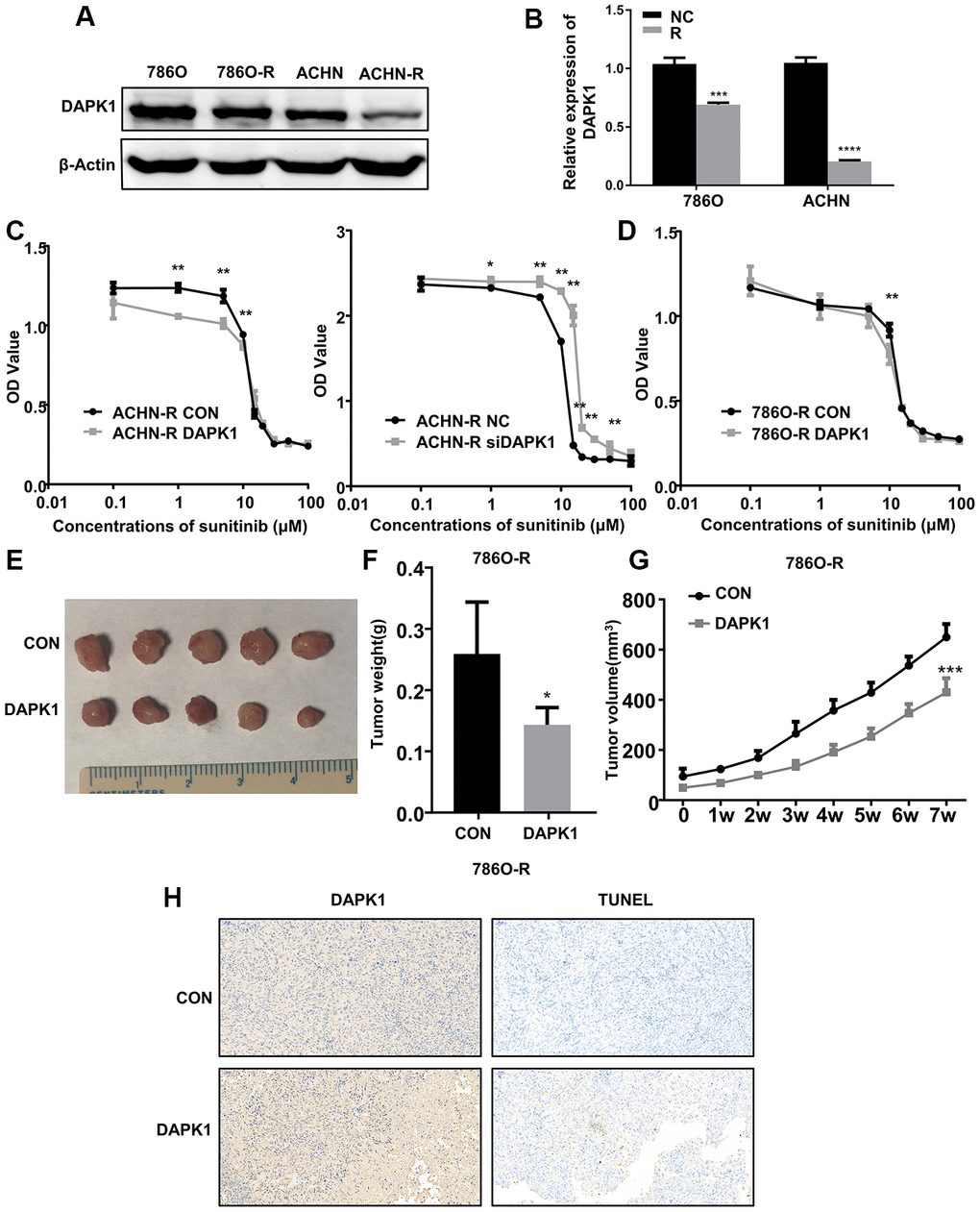 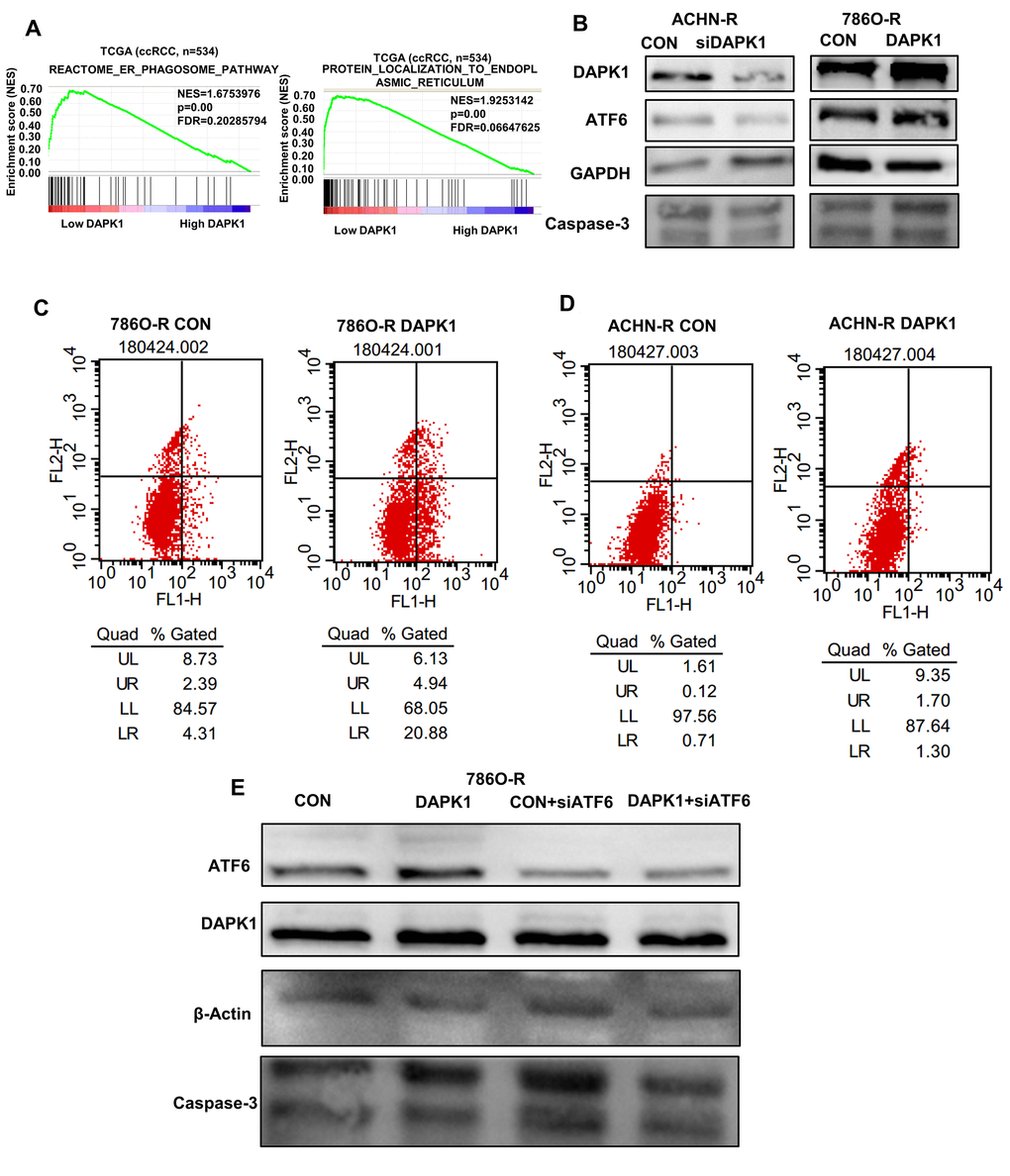 DAPK1 is a pro-apoptotic serine-threonine protein kinase that is downregulated in lung, colon, breast, and liver cancers [15, 17–20]. In breast cancer patients, downregulation of DAPK1 expression is associated with tumor metastasis and recurrence [21]. The loss of DAPK1 expression is associated with poor prognosis and advanced tumor stages in lung cancer patients [22–24]. Moreover, hypermethylation of the DAPK1 promoter is reported in tumor tissues and lymph nodes of patients with gastric cancer and head and neck tumors [25–27]. DAPK1 promoter hypermethylation correlates with reduced sensitivity to radiochemotherapy in stage I non-small-cell lung cancer patients [28]. These studies showed that DAPK1 promoter hypermethylation was positively associated with advanced cancer stages and metastasis in several cancers, thereby suggesting that DAPK1 methylation is a potential prognostic marker in different human cancers. In ccRCC, inhibition of miR-34a-5p upregulates DAPK1 protein expression and corrects the dysregulated p53-DAPK axis [29].

Non-specific receptor tyrosine kinase inhibitors (RTKIs) such as sorafenib and sunitinib are the first-line therapy for patients with progressive and metastatic renal cancer [30]. However, majority of ccRCC patients develop sunitinib-resistance and hence several investigations are underway to determine the mechanisms that result in sunitinib resistance. Our study demonstrates that DAPK1 is downregulated in sunitinib-resistant ccRCC cell lines and its overexpression increases sensitivity to sunitinib by promoting apoptosis.

The endoplasmic reticulum (ER) is an important organelle for various cellular functions, including calcium homoeostasis, biosynthesis of sterols, lipids, and proteins, and post-translational modifications of newly synthesized proteins [31, 32]. Deregulation of redox or calcium homoeostasis, glucose deficiency or viral infections can induce ER stress-mediated unfolded protein response or UPR [33, 34]. If ER stress prolongs and is not resolved, it triggers apoptosis [35, 36]. UPR is mediated by several ER stress protein sensors such as ATF6, IRE1α, and PERK [31, 37]. A previous study reported that the levels of ER stress-related proteins are reduced in DAPK knock-out fibroblasts [13]. Moreover, in DAPK null fibroblasts, ER-stress induced caspase and autophagy activation was significantly reduced [13]. This suggests that DAPK is an important modulator of ER stress and regulates autophagy and caspase-induced apoptosis. Our study demonstrates that DAPK1 regulates ATF6 expression and promotes apoptosis in sunitinib-resistant cell lines. However, we did not observe significant changes in the levels of two other ER stress sensors, IRE1α, and PERK (data no shown). Our data therefore shows that DAPK1 is a potential therapeutic target to overcome sunitinib resistance in ccRCC patients.

In conclusion, we demonstrate the prognostic role and the mechanism of action of DAPK1 in ccRCC patients. We demonstrate that low DAPK1 expression is a potential prognostic biomarker for ccRCC patients. DAPK1 overexpression reverses sunitinib resistance in sunitinib-resistant ccRCC cell lines by inducing ATF6-related ER stress and apoptosis. Therefore, DAPK1 is a potential prognostic biomarker and therapeutic target in ccRCC patients, but, the results of our study need to be investigated further in larger prospective clinical trials.

We obtained 8 pairs of primary ccRCC and adjacent normal kidney specimens from the Department of Urology, The Central Hospital of Wuhan (Wuhan, China). The adjacent normal kidney tissue specimens were obtained 5 cm from the site of primary tumor. The tissues were immediately frozen in liquid nitrogen and stored at -80°C for protein extraction. We obtained informed consent from all patients. This study was authorized by the Human Research Ethics Committee of the Huazhong University of Science and Technology.

We obtained the DAPK1 expression plasmid (DAPK1) and the corresponding control vector (SLPI pENTER vector cloning) from Vigene Biosciences (Shandong, China) and transfected ccRCC cell lines with 2 μg DAPK1 or the corresponding vector using lipofectamine 2000 according to the manufacturer's recommendations. The siRNA oligonucleotide sequences aiming at DAPK1 (siDAPK1) and the siRNA negative control (si-NC) were purchased by GenePharma (Shanghai, China). Based on the manufacturer's protocols, si-DAPK1 and si-NC with a final concentration of 50 nM were mixed with Lipofectamine® 2000 (Invitrogen, USA). The DAPK1 sequences were as follows: #1: 5′- CCACGTCGATACCTTGAAATT-3′;

Mainly, the tissue specimens were fixed with formalin, dehydrated and embedded in paraffin. The tissue sections were incubated with rabbit DAPK1 polyclonal antibody (1:400 ProteinTech) overnight at 4 °C. The next day, the tissue sections were washed with PBS and then incubated with secondary antibodies. We performed immunofluorescence assays with DAPK1 primary antibody at 4 °C for 6-8 h. Next, the cells were blocked with CY3-conjugated secondary antibodies for 1 hour and DAPI was added as previously described [36].

We measured cellular apoptosis using the Apoptosis Detection Kit according to the manufacturer’s instructions. We first collected the DAPK1- or vector control-transfected 786O-R and ACHN-R cells using 0.125% trypsin. Then, the cells were rinsed with PBS and resuspended in Annexin V binding buffer containing 5ul FITC-conjugated Annexin V for 15-20 min at 4 °C in the dark. Then, after washing with PBS buffer, the cells were stained with 5ul propidium iodide (PI) and immediately analyzed using the MACSQuant FACS Analyzer (Teterow, Germany). Then, the percentage of apoptotic cells in each sample, that is, Annexin-V-FITC+ PI+ and Annexin-V-FITC+ PI- were determined using the FlowJov7.6 software.

We analyzed the in vitro growth of ccRCC cells using the CCK8 assay kit (Dojindo, Kumamoto, Japan) according to the manufacturer's instructions. We seeded 2 × 104 cells per 100 μl medium in 96-well plates and added different concentrations (0.1, 1, 5, 10, 15, 20, 30, 50, 100uM) of sunitinib or placebo to their corresponding wells. After 48 h, the medium was replaced by 100 μl serum-free medium with 10 μl CCK8 solution to each well and incubated at 37 °C for another 2 h. Then, the absorbance of each well corresponding to the cell viability was determined at 450 nm in a plate reader.

We obtained the DAPK1 mRNA expression and the clinicopathological features of 533 ccRCC patients tumor tissues and 72 Adjacent normal tissues from the cBioPortal (http://www.cbioportal.org/public-porta). We also obtained DAPK1 gene expression for ccRCC patients from the Oncomine database (https://www.oncomine.org). The expression of DAPK1 protein in RCC tissues based on immunohistochemistry (IHC) was obtained from The Human Protein Atlas (http://www.proteinatlas.org) database. We performed Gene set enrichment analysis (http://www.gsea-msigdb.org/gsea/index.jsp) to analyze the signaling pathways related to DAPK1. We also performed protein-protein interaction (PPI) network analysis used The Search Tool for the Retrieval of Interacting Genes (STRING) and Implemented Gene ontology (GO) analysis as previously described [39].

We purchased 4- to 5-week-old male nude mice from Beijing HFK Company (Beijing, China) and injected 5×106 in 100 μl of control or DAPK1-transfected 786O-R cells into the right armpit. The tumor volumes (V) were documented once a week for 7 weeks. The mice were euthanized after 7 weeks and the tumors were isolated and stored at -80°C for further experiments. The volume of the tumor was calculated according to the length (L) and width (W). The calculation formula was V= (L×W2)/2. All animal experiments were conducted as approved by the Ethics Committee of Tongji Medical College, Huazhong University of Science and Technology.

All statistical analysis was performed using the SPSS Statistics 22.0 software (IBM SPSS, Chicago, USA). Statistical differences between experimental groups were analyzed using the Student’s t-test. The Kaplan–Meier (KM) curve analysis was used to evaluate the relationship between DAPK1 expression and survival rates. Receiver operator characteristic (ROC) curve analysis was performed and area under the curve (AUC) values was calculated to determine the prognostic accuracy of DAPK1 expression as a parameter. The univariate and multivariate Cox proportional hazard regression analyses were performed to assess the prognostic significance of DAPK1 in RCC. Two-tailed P < 0.05 was considered statistically significant.

This study was supported by grants from the National Natural Scientific Foundation of China (Grant Nos.81802538 and 81401900).

This corresponding author has a verified history of publications using the personal email address for correspondence.