Copyright: © 2021 Ding et al. This is an open access article distributed under the terms of the Creative Commons Attribution License (CC BY 3.0), which permits unrestricted use, distribution, and reproduction in any medium, provided the original author and source are credited.

Osteosarcoma is a malignant bone pleomorphic tumor in children and adolescents [1]. The chemotherapeutic agents for osteosarcoma often include methotrexate, doxorubicin, cisplatin and ifosfamide [2]. With advances in several therapeutic approaches, the 5-year survival rate of osteosarcoma patients is about 70% [3, 4]. Patients with metastatic osteosarcoma or recurrent tumors often have worse outcomes [5, 6]. Hence, the identification of new therapeutic markers is necessary to improve patient care and obtain a favorable outcome in osteosarcoma.

It is known that a family of noncoding RNA molecules, known as microRNAs (miRNAs), is critically involved in carcinogenesis and tumor progression [7, 8]. For example, miR-506 (also known as miR-506-3p) has been found to regulate oncogenesis in human cancers, including osteosarcoma [9]. One study showed that miR-506-3p suppressed proliferation and stimulated apoptosis via regulation of the Sirtuin 1 (SIRT1)/Akt/FOXO3a pathway in ovarian cancer cells [10]. Moreover, miR-506 was reported to control proliferation and apoptosis via regulation of the RhoA/Rho-associated protein kinase (ROCK) pathway in hepatocellular carcinoma cells [11]. Overexpression of miR-506 suppressed metastasis of gastric carcinoma cells by targeting zinc finger E-box-binding homeobox 2 (ZEB2) [12]. Similarly, miR-506 attenuated tumor growth and metastasis via inactivation of the Wnt/β-catenin pathway by inhibiting LIM homeobox 2 (LHX2) in nasopharyngeal carcinoma [13]. It has been reported that miR-506 expression levels are decreased in osteosarcoma specimens compared with paired normal bone tissues [14–16]. Upregulation of miR-506 suppressed cell growth and invasiveness by targeting Snail2 in osteosarcoma cells [14]. Similarly, promotion of miR-506 inhibited proliferation and enhanced apoptosis by targeting AEG-1 in osteosarcoma cells [15]. These reports indicate that miR-506 plays an essential role in osteosarcoma.

Skp2 is identified as an oncoprotein that exhibits tumor-promoting functions in malignancies [17]. It has been shown that Skp2 has a critical role in the regulation of cellular processes such as differentiation, proliferation, apoptotic death, motility and the cell cycle via the ubiquitination and degradation of Skp2 substrates [18, 19]. The substrates of Skp2 often are tumor suppressors including p21, E-cadherin, p27, p57, FOXO1 and p130 in human cancer cells [19]. Upregulation of Skp2 has been reported in a broad spectrum of human cancers, including breast, prostate, pancreatic cancer, and osteosarcoma [20–22]. For example, saurolactam, a natural agent from Saururus chinensis, suppressed proliferation and motility in osteosarcoma cells in part by targeting Skp2, indicating that Skp2 is involved in osteosarcoma progression [23]. In addition, 15,16-dihydrotanshinone I inhibited proliferation and migration and induced apoptosis partly by targeting Skp2 in osteosarcoma cells [24]. 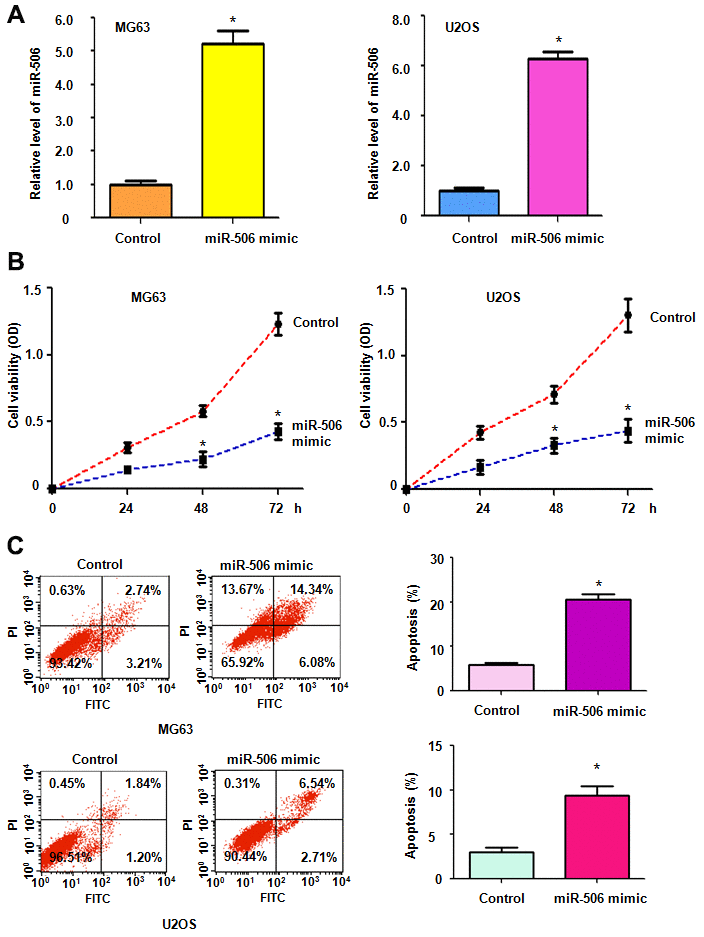 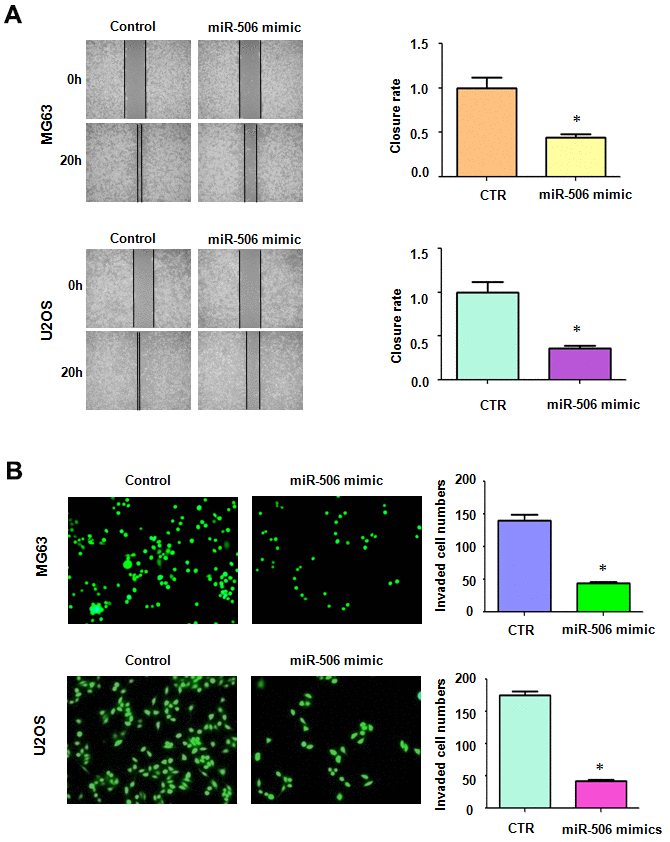 To identify a miR-506 target, we used several miRNA prediction tools, including miRTar, TargetScan, miRDB, and miRanda, to predict the downstream target of miR-506. Skp2 was predicted as a potential target of miR-506. We identified one binding site between the Skp2 3’-UTR sequence and the miR-506 sequence (Figure 3A). To confirm the interaction between miR-506 and the Skp2 3’-UTR, we conducted a dual luciferase reporter assay in U2OS cells. Our results demonstrated that miR-506 mimics reduced the luciferase activity of the wild-type Skp2 3’UTR, but not the mutant-type Skp2 3’UTR reporter (Figure 3B). Furthermore, our data illustrated that miR-506 upregulation diminished the Skp2 expression in MG63 and U2OS cells (Figure 3C, 3D). Accordingly, miR-506 mimics reduced Skp2 expression and subsequently promoted the expression of downstream targets, FOXO1 and p57, in osteosarcoma cells (Figure 3C, 3D). These results suggest that Skp2 might be a potential target of miR-506. 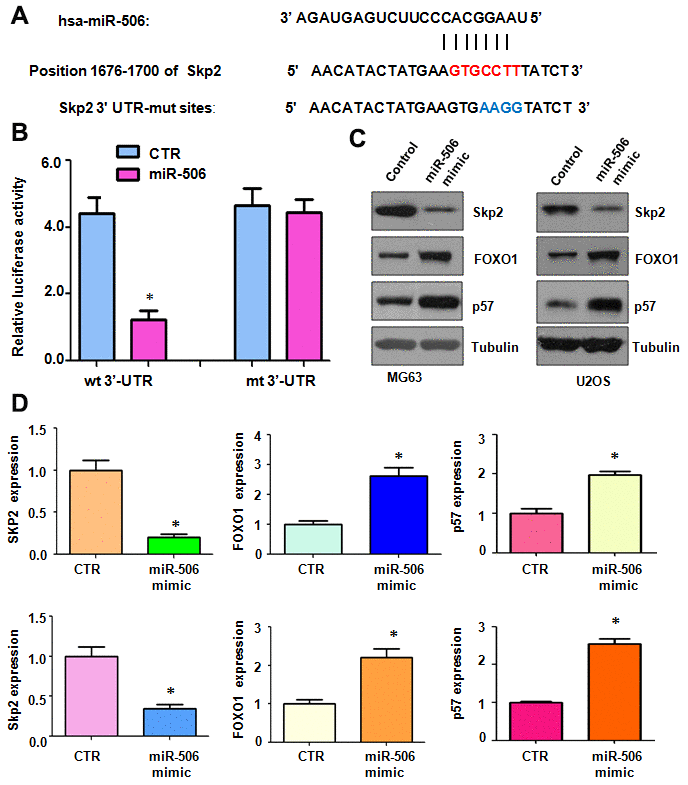 Figure 3. Skp2 is a target of miR-506. (A) The interaction between miR-506 and the Skp2 3’UTR is shown. Mutation of the putative miR-506–binding site on the Skp2 3’UTR is presented. (B) A luciferase reporter assay was carried out to test the binding of miR-506 to the Skp2 3’-UTR. CTR: Control. WT: wild type; Mt: mutation. (C) Western blotting detection of the protein level of Skp2 and its targets in osteosarcoma cells transfected with miR-506 mimics. (D) Quantitative results of (C). *p < 0.05, compared to control. 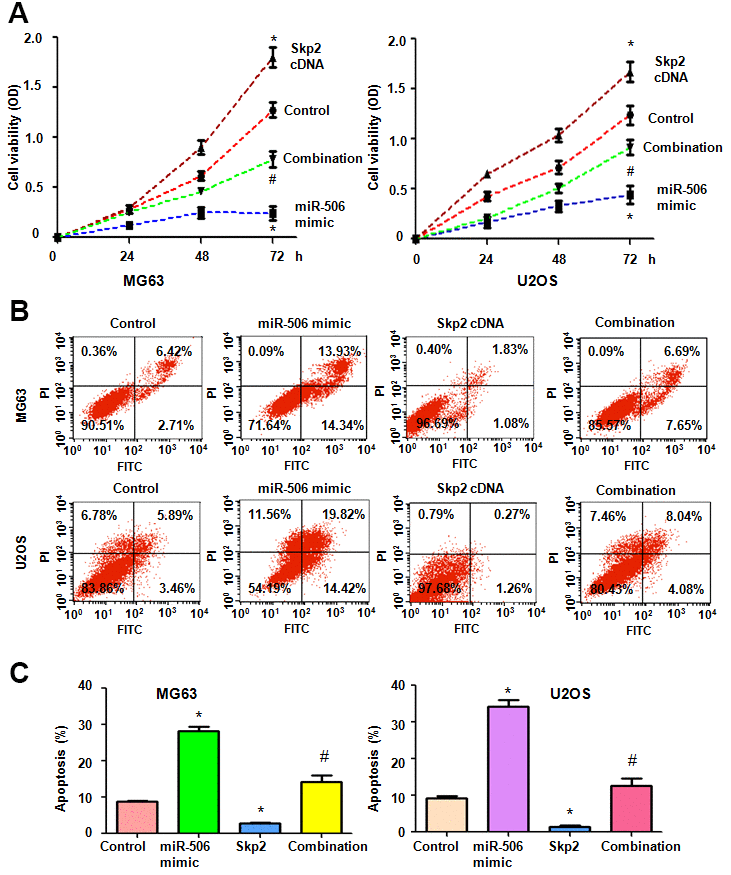 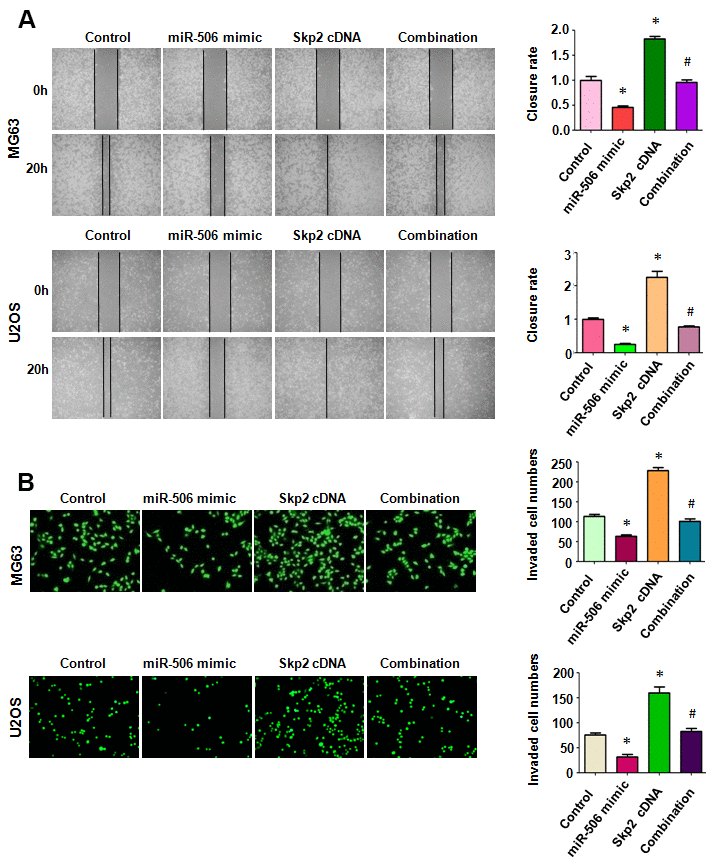 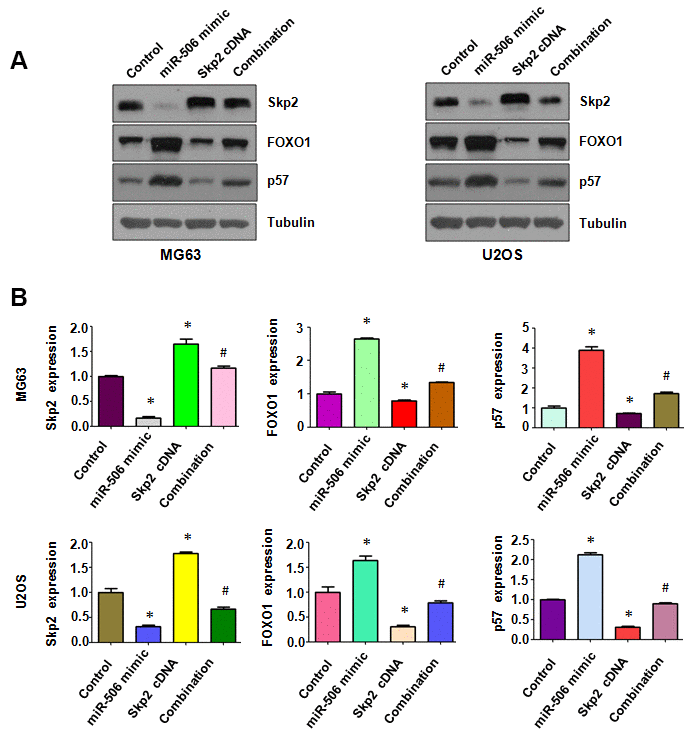 Figure 6. Skp2 overexpression attenuates miR-506-induced upregulation of FOXO1 and p57. (A) Western blotting detection of the protein level of Skp2 and its targets in osteosarcoma cells after miR-506 mimic transfection and Skp2 upregulation. (B) Quantitative results of (A). *p < 0.05 vs control, #p < 0.05 vs miR-506 mimics or Skp2 cDNA transfection. 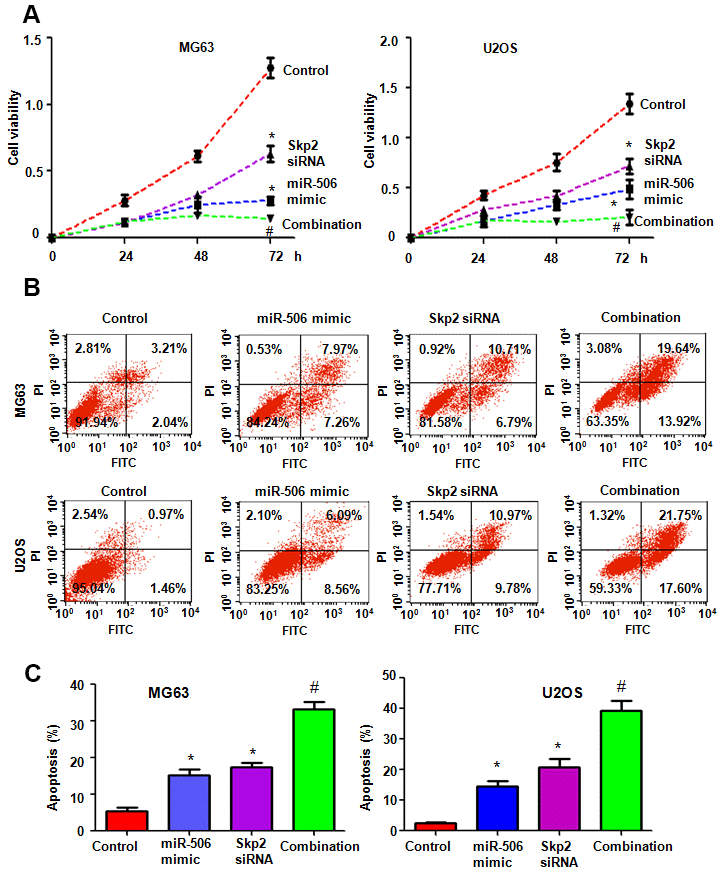 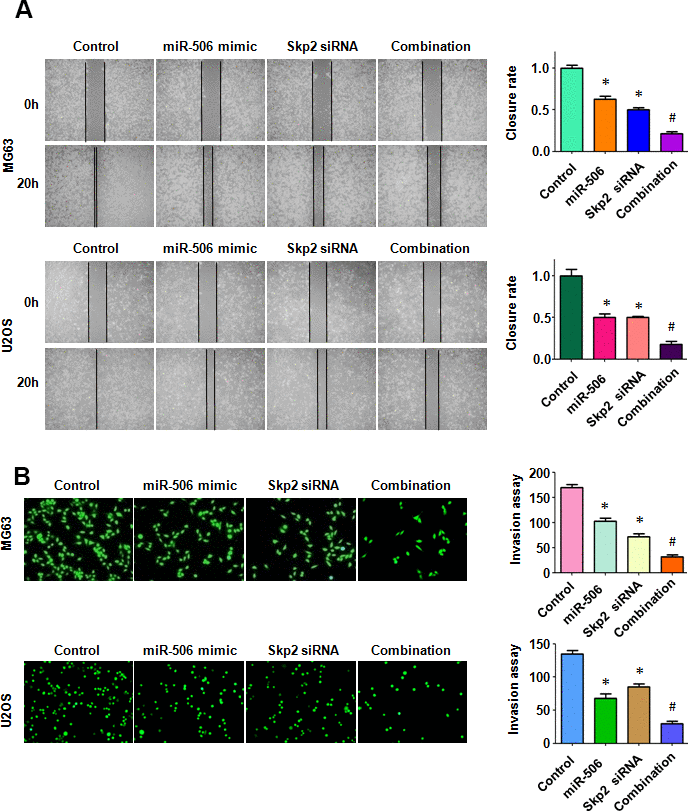 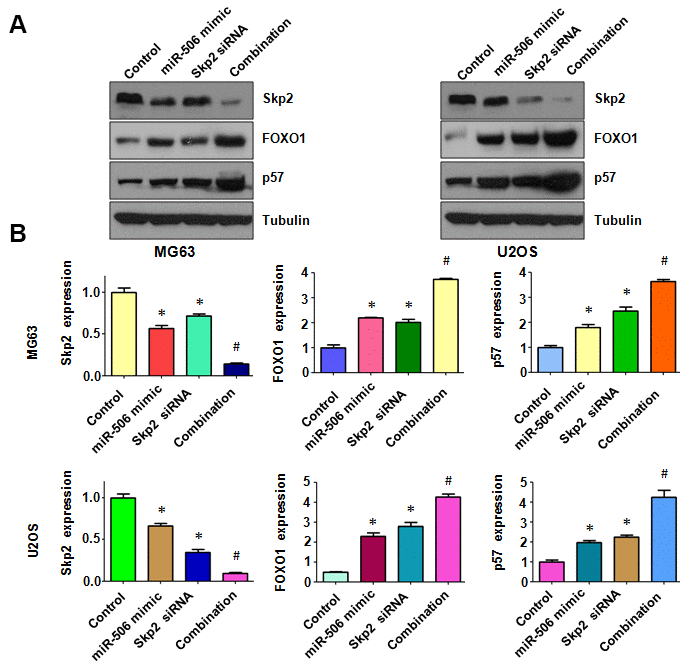 Skp2 can be regulated by multiple miRNAs in human tumors. For instance, that miR-7 induced G1 to S phase transition through reduction of Skp2 and Psme3 in CHO cells [29]. The miR-30 family targeted Skp2 in the premetastatic phase in the lungs of B16 tumor-bearing mice, leading to inhibition of pulmonary vascular hyperpermeability [30]. Another study determined that miR-200b/c targeted RECK and subsequently upregulated Skp2 expression and inhibited p27 levels in colorectal cancer cells, resulting in enhanced cell proliferation [31]. Moreover, miR-3163 inhibited the expression of Skp2 in non-small cell lung cancer (NSCLC) cells and suppressed the growth of NSCLC cells [32]. In addition, miR-186 suppressed proliferation and stimulated apoptosis by targeting Skp2 in esophageal squamous cell carcinoma [33]. One group reported that miR-508-5p retarded metastasis by inhibition of Skp2 in gastric cancer cells [34]. Another group showed that miR-1297 increased cell proliferation by directly targeting PTEN and subsequently upregulating Skp2 in NSCLC cells [35]. In addition, miR-340 displayed antineoplastic functions via suppressing Skp2 in liver carcinoma [36]. Here, we reported that miR-506 targeted Skp2 and led to antitumor activity in osteosarcoma cells.

The human osteosarcoma MG63 and U2OS cell lines were used to detect the effects of miR-506. These cells were grown in DMEM at 37° C in a 5% CO2 atmosphere.

Cells were seeded onto 96-well or six-well plates and incubated overnight. Then, osteosarcoma cells were transfected with miR-506 mimics, Skp2 cDNA, Skp2 siRNA or a combination of these reagents via Lipofectamine 2000.

After MG63 cells and U2OS cells were transfected with miR-506 mimics by Lipofectamine 2000, the cells were incubated onto 96-well plates for different times. Then, MTT was added to the wells and the cells were cultured for 4 hours. Then, OD values were measured by the microplate reader.

Cells were incubated in six-well plates overnight and transfected with miR-506 mimics, Skp2 cDNA, Skp2 siRNA or a combination for 72 hours. Then the cells were collected and apoptosis was analyzed [41].

The treated cells were seeded onto 6-well plates and incubated with complete DMEM until confluence. After the cells were serum starved overnight, scratch wounds were generated by a yellow pipette tip. Cell debris was removed by washing twice. After 20 hours, images were captured by microscopy to illustrate wound areas.

Total RNA was harvested using the Trizol reagent from transfected osteosarcoma cells. The cDNA was synthesized by reverse transcription using miRNA primers. All primers were purchased from GenePharma. PCR was carried out to examine the expression of miR-506 as described previously [42].

Treated cells were centrifuged and lysed by RIPA lysis buffer, and proteins in cell lysates were subjected to SDS-PAGE and further transferred to PVDF membrane. The western blotting was done as described before [41].

RL and JL conceived and designed the study. LD, RS, QY, and CW performed the experiments. XH and YC analyzed results and interpretation. LD and RL wrote the paper. JL critically reviewed and edited the manuscript. All authors approved the manuscript.