Tissue inhibitor matrix metalloproteinase 1 (TIMP1) has been reported to act as a tumor oncogene in colon cancer. However, little is known about the biological role of TIMP1 in gastric cancer. In this study, we found that the expression of TIMP1 in GC tissues was upregulated compared with the normal gastric tissues. TIMP1 was confirmed as a direct target of miR-6745 and silencing TIMP1 mimicked the effects of miR-6745 in GC cells. Further mechanism studies have shown that miR-6745 inhibits the Wnt/β-catenin pathway by targeting TIMP1, thereby inhibiting cell proliferation, migration and invasion. In addition, through the analysis of GC tissues, a negative correlation between miR-6745 and TIMP1 was found in 42 GC tissues. Our findings indicate that the miR-6745-TIMP1 axis regulates Wnt/βcatenin signaling and participates in GC tumorigenesis and provide a potential therapeutic target for preventing GC progression.

Gastric cancer (GC) is a frequently occurring malignant cancer [1, 2]. According to statistics from the World Health Organization, there are approximately 1 million new cases of GC patients every year, and GC has become the third leading cause of cancer deaths worldwide [2, 3]. Although an increasing number of GC diagnosis and treatment strategies have been developed in recent years, the prognosis of patients is still very poor [4, 5]. Thus, it is important to elucidate the molecular mechanism of the occurrence and development of GC.

MicroRNA is an endogenous small non-coding RNA that can regulate protein expression levels [6, 7]. It has been reported that miRNAs play important biological functions in various types of human cancers, including oncogenes or tumor suppressor genes [8, 9]. Exploring the molecular mechanisms that miRNA regulates the occurrence and development of cancer will help the treatment and diagnosis of tumors.

Tissue inhibitor matrix metalloproteinase 1 (TIMP1) is one of the tissue inhibitor members of the metalloproteinase family [10]. TIMP1 regulates the balance of matrix remodeling during the degradation of extracellular matrix by inhibiting the proteolytic activity of matrix metalloproteinases (MMPs) [10, 11]. Studies have shown that TIMPs also perform important biological functions in cell proliferation and metastasis [10, 12–14]. In clinical studies, the high expression of TIMP-1 in the serum of patients with various tumors is often associated with poor prognosis [15–17]. However, the molecular mechanism of TIMP1 in GC remain to be elucidated. 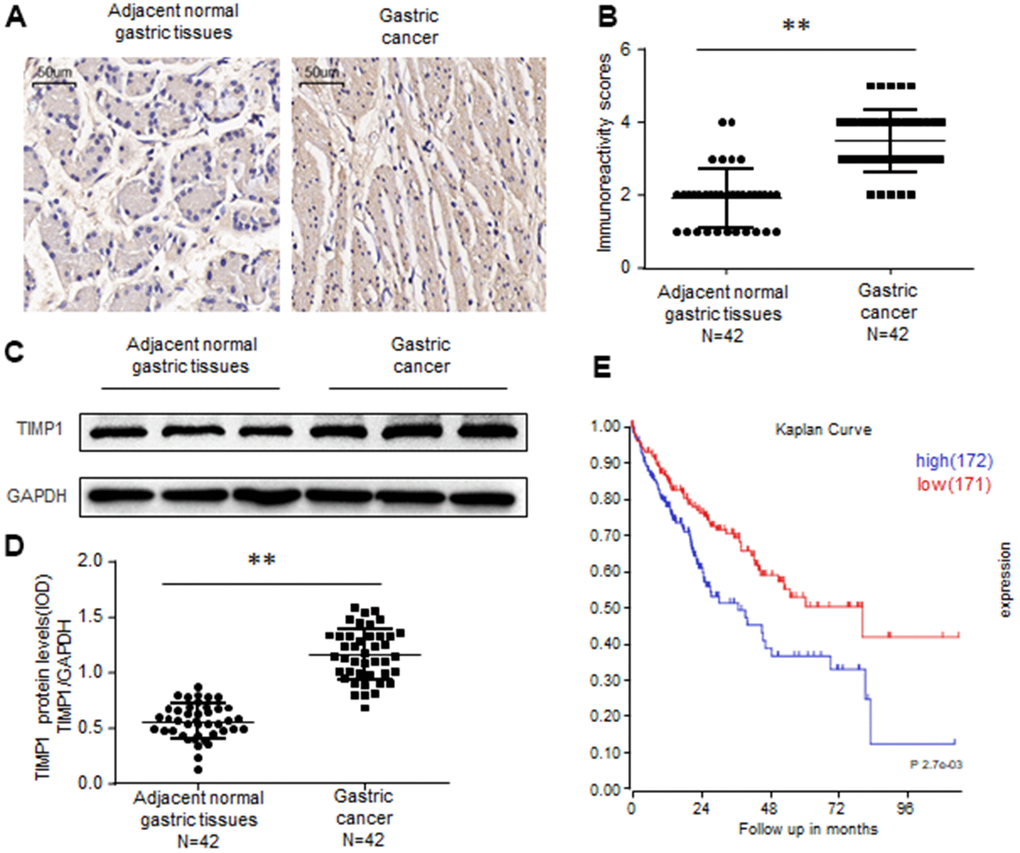 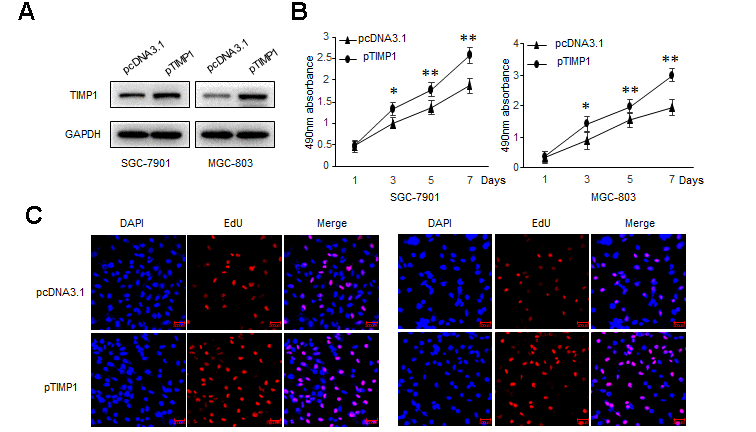 Figure 2a. TIMP1 promotes GC proliferation, migration and invasion. SGC-7901 and MGC-803 cells were transduced with TIMP1 expression plasmid (pTIMP1) or pcDNA3.1 as indicated. (A) Levels of TIMP1 were detected by western blot. (B) Cell proliferation was determined at the indicated time points by MTS assay. (C) Effect of TIMP1 on cell proliferative abilities was examined by EdU incorporation assay. 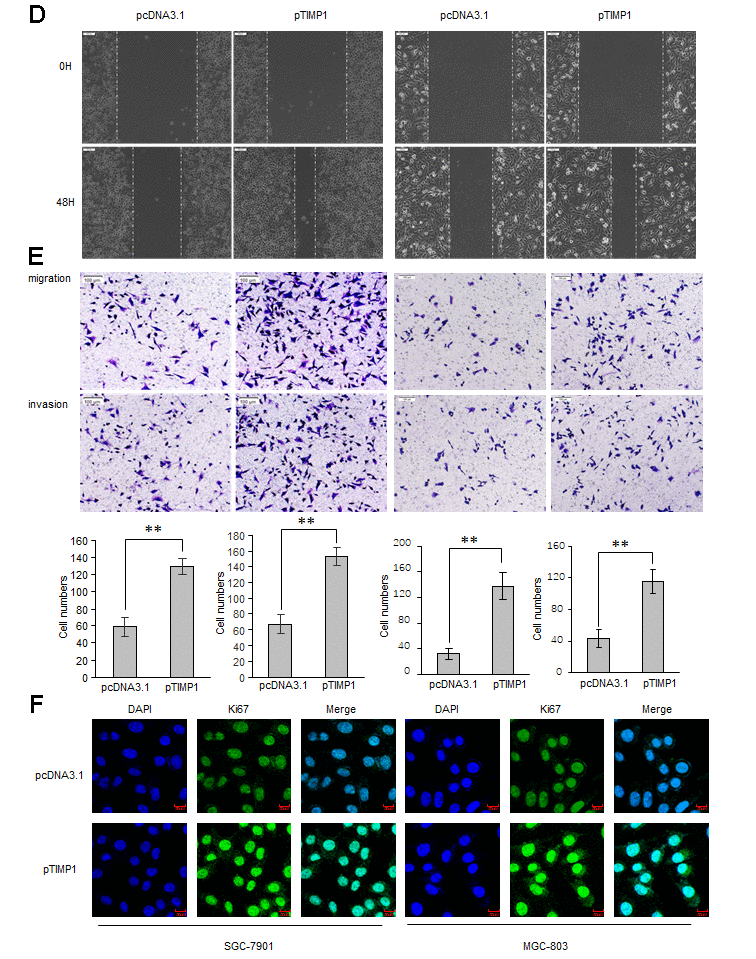 Based on bioinformatics analysis, we predicted 5 potential binding miRNAs in TIMP1 3'-UTR (Figure 3A). Real-time RT-PCR results showed that the expression of miRNA-6745 was reduced in GC cells (Figure 3B). Through the detection of 42 cases of GC tissues and 42 adjacent normal gastric tissues, we found that miR-6745 was significantly reduced in GC tissues (Figure 3C). In addition, we found that TIMP1 protein levels were negatively correlated with miR-6745 levels in GC tissues (Figure 3D). To explore whether miR-6745 directly binds to the TIMP1 3'-UTR, dual-luciferase reporter assays were performed (Figure 3E). The results showed that miR-6745 repressed luciferase activity of Wt-TIMP1 3′UTR, but not Mut-TIMP1 3′UTR (Figure 3F). These findings indicate that miR-6745 directly binds to the TIMP1 3'-UTR.

TIMP1 promotes the GC process, and TIMP1 is the direct target of miR-6745, we then investigated whether miR-6745 have a similar effect on GC tumorigenesis? GC cells were transduced with miR-6745 mimics or miRNA-6745 mimic NC. Firstly, EdU incorporation assay and MTS assay were performed to assess GC cells growth and found that miR-6745 obviously decreased cell proliferation (Figure 4A–4C). Wound-healing and transwell assays were performed in GC cells, as shown in Figure 4D, 4E, the invasive and migratory ability were significantly reduced after transfected with miR-6745 mimics. Immunofluorescence staining also showed that miR-6745 also reduce the expression of KI67 (Figure 4F). 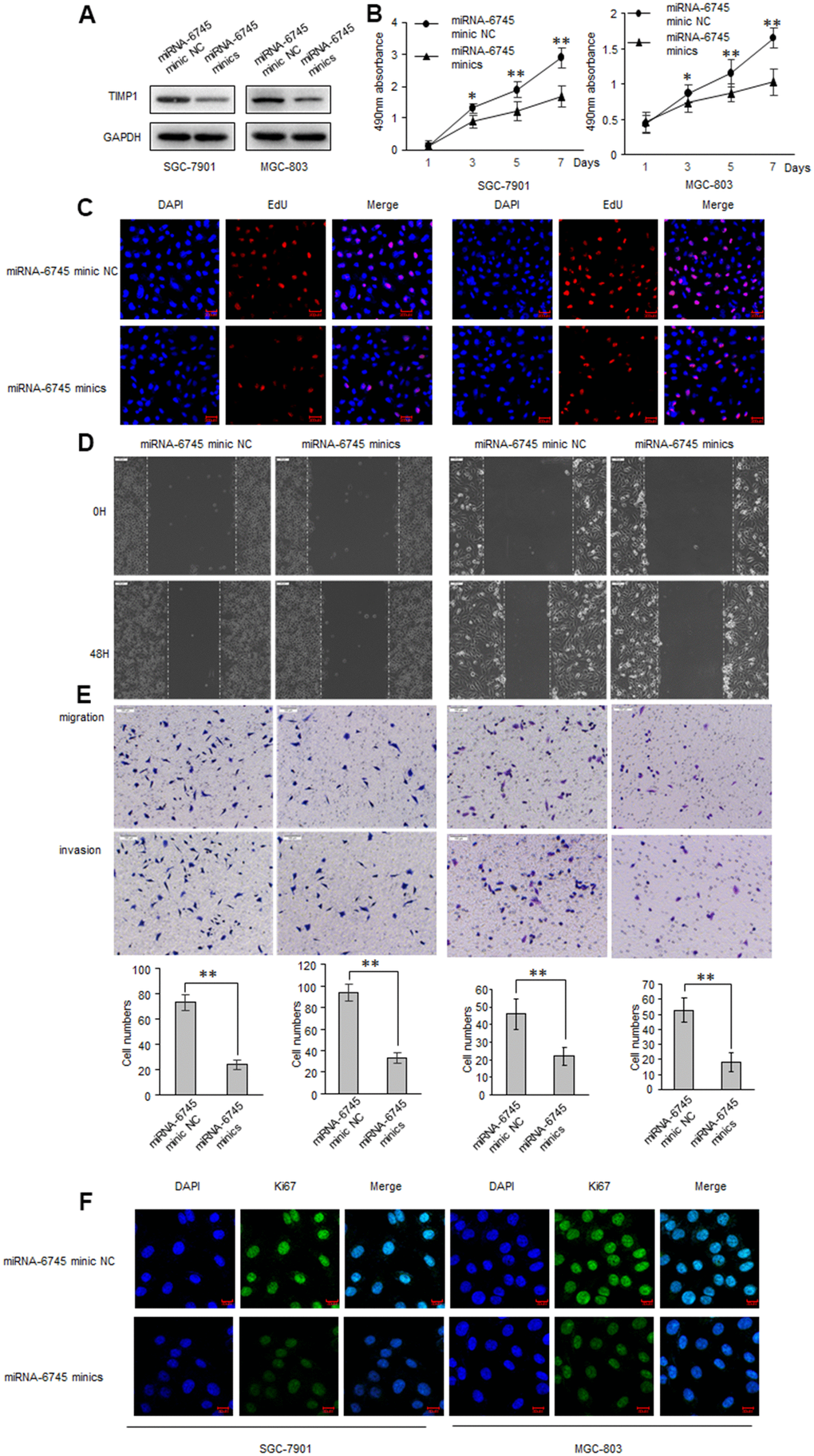 As expected, the cell proliferation invasive and migratory ability, and the expression of KI67 were significantly elevated when transfected with miR-6745 inhibitors (Supplementary Figure 2).

To explore the biological functions of miR-6745 on GC cell proliferation and metastasis in vivo, we constructed two GC cell lines (Lv-miR-6745-SGC-7901 and Lv-miR-6745- MGC-803) that stably overexpresses miR-6745. Then we injected Lv-miR-6745 or Lv-miR-NC cells subcutaneously into nude mice. All mice were euthanized and stripped of tumor at 28 days after the experiment, the average tumor volumes and weights in Lv-miR-6745 group were smaller than Lv-miR-NC group (Figure 5A, 5B). Immunochemistry showed that that TIMP1 and Ki67 were significantly decreased in the Lv-miR-6745 group (Figure 5C). These results indicate that miR-6745 can inhibit tumorigenesis in vivo. 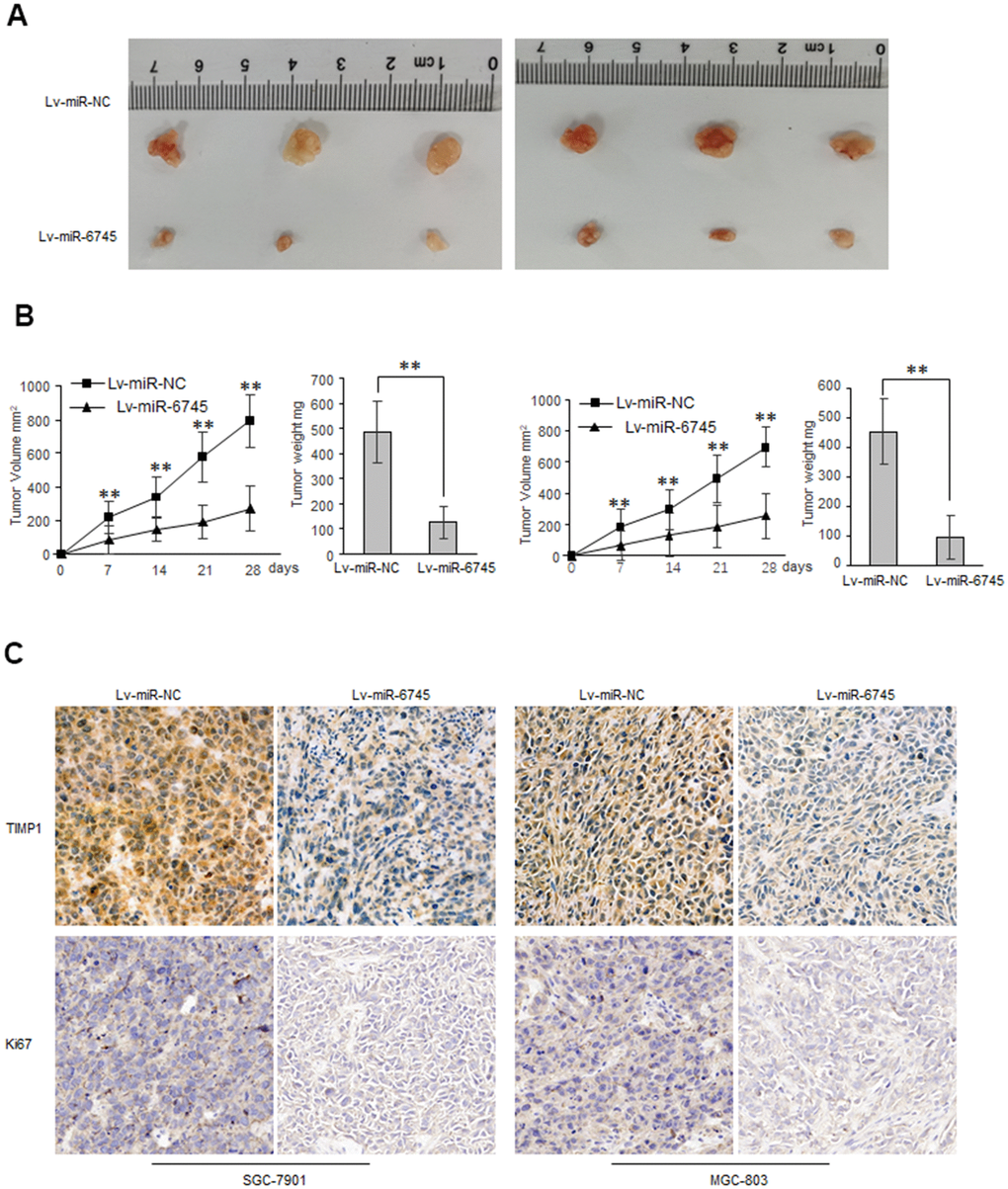 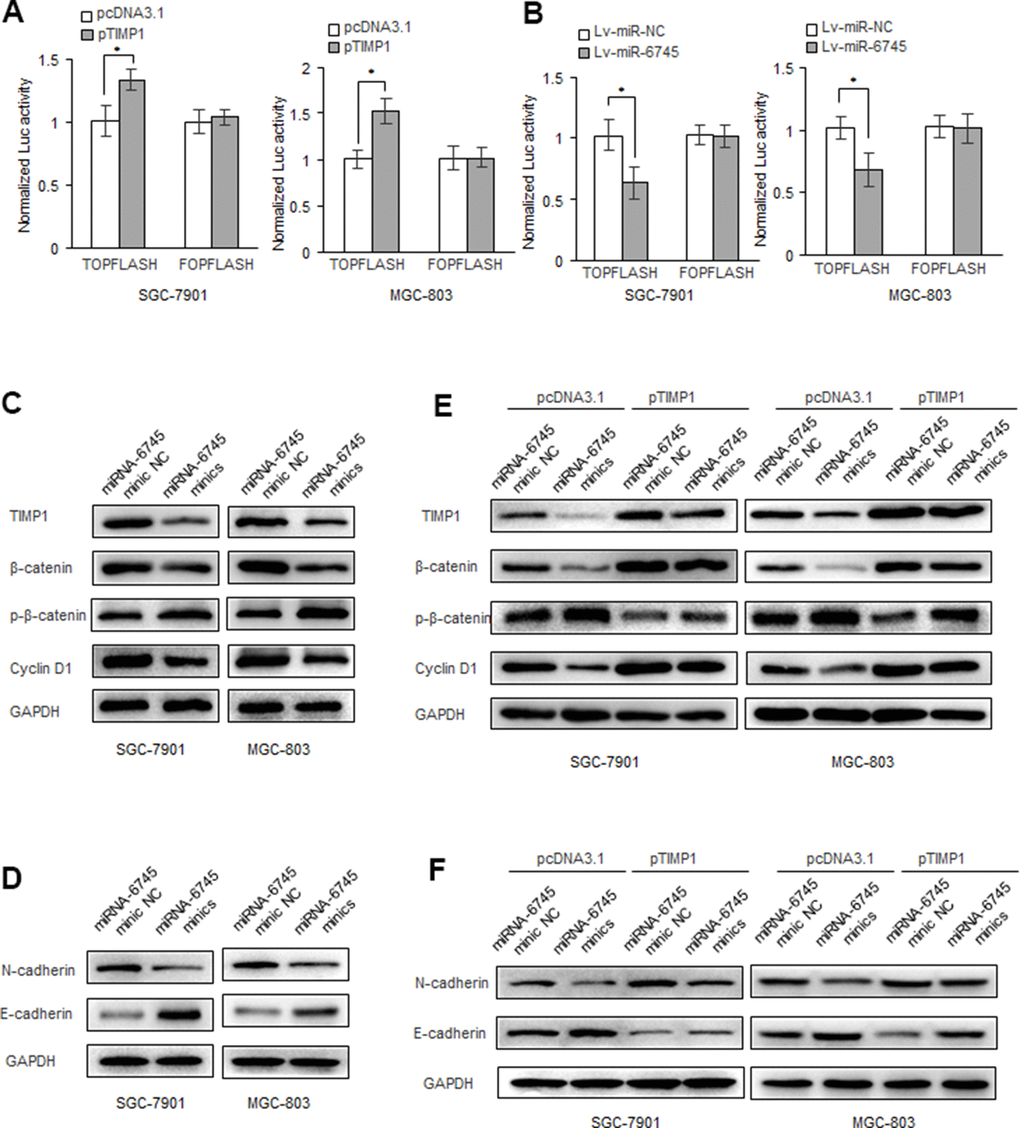 In our study, we found that miR-6745 inhibits the proliferation, migration and invasion of GC cells. We demonstrated that miR-6745 inhibits the Wnt/β-catenin signaling pathway by reducing the expression of TIMP1, thereby reducing cell proliferation, migration and invasion in vitro and in vivo. Moreover, the analysis of GC tissues showed that the expression of miR-6745 in GC tissues was low, and it was negatively correlated with TIMP1.

TIMP1, which is the first-discovered natural collagenase inhibitor, has been demonstrated to be related to the occurrence of a variety of cancers [1, 21, 22]. TIMP-1 has both MMPs-dependent anti-proteolytic activity and MMP-independent cell growth activity [23]. Our results show that TIMP1 promotes the occurrence and development of GC, which is consistent with previous reports about TIMP1 as an oncogene in other cancers, including breast cancer [24], colon cancer [10], glioblastoma [25], and non-small cell lung cancer [26].

Wnt pathway is usually divided into classic Wnt signaling pathway (depending on β-catenin protein) and non-canonical Wnt signaling pathway (not dependent on β-catenin protein), which is highly conserved signaling pathways in cells [27, 28]. After the classical Wnt pathway is activated, cytoplasmic β-catenin escapes the degradation of GSK3β, the steady-state concentration increases, and β-catenin enters the nucleus. It can bind to transcription factors, especially TCF/LEF, to regulate the transcription of target genes [29]. This pathway mainly regulates cell differentiation and proliferation [30, 31]. Abnormally activated Wnt signaling pathway promotes the formation of pancreatic cancer and affects tumor metastasis [32, 33]. Our results show that in GC, overexpression of TIMP1 can activate the Wnt pathway. Abnormal expression of β-catenin plays an important role in the formation and development of GC [34, 35]. In addition, TIMP1 can also enhance the expression of CyclinD1 [36].

In summary, we found that the downregulation of miR-6745 in GC tissues was negatively correlated with the high expression of TIMP1. As summarized in Figure 7, miR-6745 can inhibit the occurrence and development of GC by directly targeting TIMP1 to regulate downstream Wnt/β-catenin signaling. Therefore, we provide a new strategy for the prevention, diagnosis and treatment of GC.

Figure 7. Schematic diagram of roles of miR-6745-TIMP1 axis on Wnt/β-catenin signaling and its function in gastric tumorigenesis. Under normal non-transformed conditions, miR-6745 binds to the 3-UTR in the TIMP1 mRNA and down-regulates TIMP1 protein levels. In GC, there is reduced levels of miR-6745 leading to elevated TIMP1 expression and activation of the Wnt/β-catenin signaling pathway.

GC tissue samples and normal gastric tissue samples were collected from the Cancer Hospital of Hubei (Wuhan, P. R. China). This study obtained the informed consent of all patients and the approval of the Ethics Committee of the Cancer Hospital of Hube. MGC-803 and SGC-7901 cell lines were obtained from the Cell Bank of the Chinese Academy of Sciences (Shanghai, China). GC cells were grown in Roswell Park Memorial Institute (RPMI) 1640 medium (DMEM, BI, Israel) supplemented with 10% FBS and cultured at 37° C in a 5% CO2 humidified incubator.

GC cells were seeded into 6-well plated and scratched with a pipette tip after an overnight incubation. Then, wash off the detached cells with PBS and continue incubating in serum-free medium.

Chamber invasion ability were performed with Corning chambers (Corning, USA). 1×105 cells cultured with 200 μl serum-free media were seeded onto Transwell chambers. After incubating for 24 hours, cells were fixed with 4% polymethanol for 20 minutes, then stained with 0.1% crystal violet for 15 minutes, and pictures were taken under an inverted microscope for statistics.

GC cells were transduced with a lentivirus expressing miR-6745 or a negative control (Genechem, Shanghai, China), and 500 ng/mL puromycin was used for selection. After 6 days, the cells were verified by real-time RT-PCR.

6-week-old male BALB/c nude mice were obtained from Beijing Vital River (Charles River Laboratories). And 5 × 107 Lv-miR-6745 or Lv-miR-NC cells in 150 μL PBS were subcutaneously injected into the mice. The mice were euthanized after 28 days. All animal experiments were approved by Institutional Ethics Committee of Wuhan University of Science and Technology (P. R. China).

All data are presented as means ± SEM. The experimental data were analyzed by SPSS v13.0. The statistical description of the experimental data in each group was represented by x±S. T-test and one way ANOVA with Tukey correction was used to analyze the presence of a difference among different groups. * P < 0.05. ** P < 0.01.

X.Y.L. conceived and devised the study. X.Y.L., H.L., and Y.X. designed the experiments and analysis. H.L., X.Y.Z., L. and Q.B.Z. performed the experiments and analyzed the data. H.L., and T.C.Z. contributed reagents and materials. X.Y.L., S.Q.F., and H.L. supervised the research and wrote the manuscript. All authors read and approved the final manuscript.

The authors have no potential conflicts of interest to disclose.